When ICE Detains One of Your Food Community’s Own

To care about food—in that visceral, gut-wrenching, true way—is to care about the welfare of those who source, prepare, and serve it. 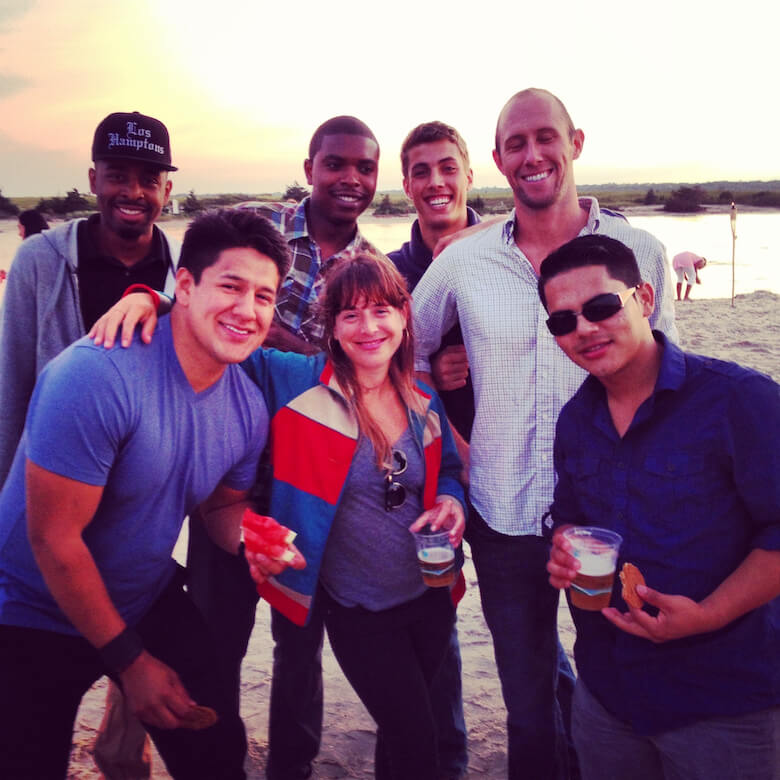 The author (center) and Luis (bottom left) in 2013. • Photo courtesy of Hannah Selinger

Let me apologize, first, for breaking the third wall and using first-person in this piece. But this piece is personal in a way that much of my work is not.

I worked in restaurants for nearly 20 years. I began as a surly server at a local pizza joint, and I worked my way up, through dives and Michelin stars, to a reasonably respected sommelier. In my years in sweaty, hot, sometimes repetitive, and always frenetic restaurants, one common theme prevailed. The people with the worst jobs—the jobs that were the hottest and the hardest and that commanded the longest hours—were almost always held by Bengalis and Mexicans, Ecuadorians and Colombians. They willingly stepped up where so many of us would not.

A recent rash of Immigration and Customs Enforcement (ICE) stings nationwide, propagated by a nervous, race-baiting president and his accommodating Congress, has depleted a certain workforce. Take, for example, California’s agriculture industry, a $47 billion dollar juggernaut that is fueled, in great part, by immigrant labor. In early March, Bloomberg reported that an ongoing labor shortage already impacts 55 percent of California farmers in the Central Valley, a shortage that is due to grow with this year’s stepped up immigration raids. There are 2 million farm laborers in California; over 1.5 million of them are undocumented.

Rotting produce and less food making it to market is one national implication of curbing immigration in this manner. But the real-life struggle of real-life immigrants hits closer to home on Eastern Long Island, which hosts a particularly robust immigrant community. These immigrants work as landscapers and day laborers, as dishwashers and restaurant managers. Undocumented or not, they comprise the skeleton of our workforce.

The story of Luis Marin-Castro, then, is not purely anecdotal. Luis is a friend of mine. We met five summers ago when I was spending my penultimate season working in restaurants. I had been hired as the summer sommelier at East Hampton stalwart Nick & Toni’s, where Luis had been working for several years, first as a busser and later as a dining room captain. Eventually, he would become a sommelier himself.

Luis emigrated from his native Ecuador in 1997 with his family. He graduated from East Hampton High School and went on to Suffolk County Community College before beginning his career in restaurants. Over two decades later, he has established a reputation as a knowledgeable wine savant, splitting his time between Nick & Toni’s and Wainscott Main Wine and Spirits. And, on Monday, he became a casualty of an immigration war waged on New Yorkers by federal radicals. 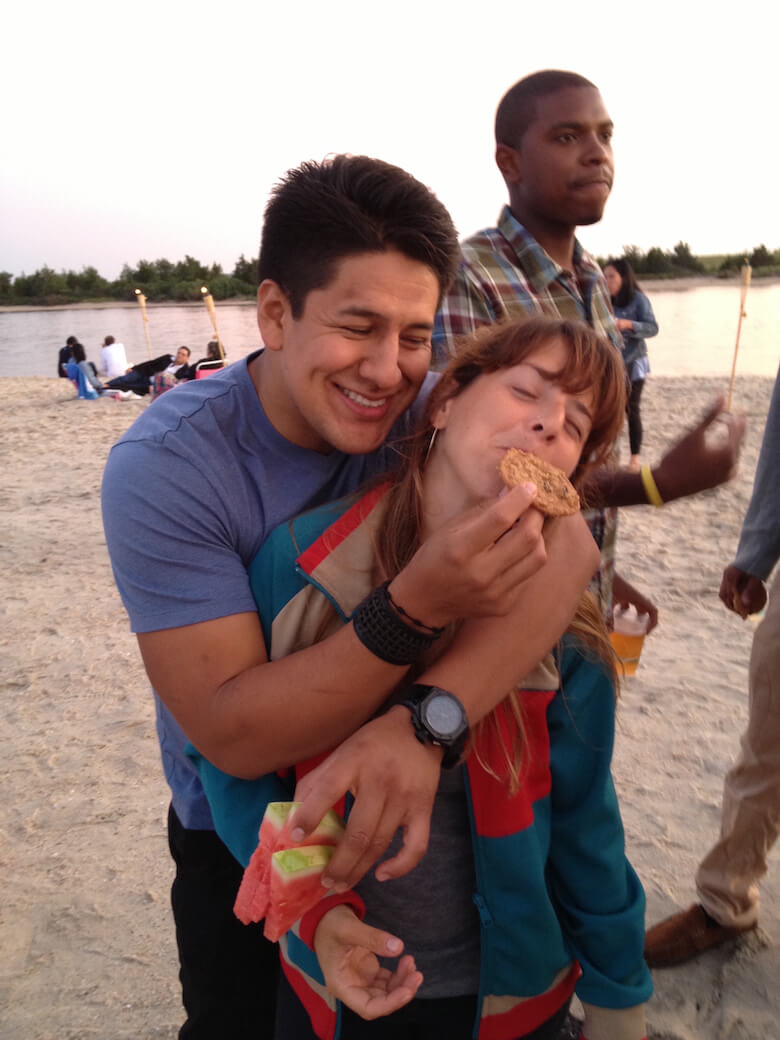 Luis and the author in 2013. • Photo courtesy of Hannah Selinger

During his April 9 morning shift in Wainscott, Luis was apprehended by ICE agents while unloading a case of wine. Technically, ICE may not enter a home without permission, nor may they enter a place of business; but outside is fair game. Luis was told that he was being placed under arrest for lacking American citizenship status. He was not afforded the opportunity to speak with an attorney and, after 36 hours of detention in New Jersey’s Bergen County Jail, he was removed by ICE Air, at four in the morning, and transferred to the Cibola County Correctional Center in Milan, New Mexico—a state that boasts an 84 percent deportation rate (as compared to New York’s 22 percent).

As of this writing, Luis has not yet seen a lawyer. He has been in detention for nearly 120 hours, without legal representation or adequate information from his officers. He is 2,000 miles from his home, wife, family, and everyone who can attest to his value to the community. On April 13th, he was due to be fingerprinted for his green card, to which he is entitled, since he is married to an American.

Much will be written about how Luis has a criminal record, so let’s get that out of the way now. In 2015, over a Hamptons Memorial Day weekend, he was arrested for aggravated drunken driving. If you think that drunk driving makes a person less of a contributing member to society, or that citizenship should be withheld from people convicted of such misdemeanors, you should visit my hometown in northern Massachusetts, where the criminal offense—largely perpetrated by a largely white population—is practically de rigueur. In the spirit of transparency, I will here confess that I was arrested for a driving under the influence in 2003, a charge that, following a no-contest plea and a 45-day negotiated license suspension, was disappeared from my record, in no small part because I was white, affluent, and the daughter of a prominent attorney.

But the America I learned about in Dr. Joyce’s sophomore American History class is not a punitive one. To believe that a human being must live a flawless life in order to emigrate for a better one is to ignore the fact that humans are not flawless, an unreasonable expectation for even the most documented among us.

I know what you’re thinking: Why must we discuss politics in the context of food? Can we not have this one hedonistic thing, this last human pleasure, divorced from the real world intervention of ICE agents knock-knock-knocking at an undocumented person’s door? No. No, we cannot. Immigrants cook your food and wash your dishes and pick your sun-ripe fruit. They accept the jobs that you (and I) will not accept in the interest of that final pleasure: a perfectly executed dish, or a shimmery night of indelible service. Who has ever heard of a pleasurable experience on planet earth that humans have not sought to exploit for political purpose? We expect a curtain between our experience in the front of the house and the unmasked wizard in the back. That curtain comes at a cost.

The cost, it seems, is the human toll, waged on ordinary communities, like mine, by people who view immigration through the kaleidoscope of buzzwords and misrepresentative statistics. But Luis Marin-Castro is not a statistic; he’s a human being. And he’s a stand-in for every immigrant who has been detained without rights, for every immigrant who has washed your sticky dishes after your chocolate lava cake has exploded, after your table’s tea light has dwindled. To care about food—in that visceral, gut-wrenching, true way—is to care about the welfare of those who source, prepare, and serve it. To ignore that is to ignore the very sense of community that eating is intended to foster.

Update as of April 15, 2018: Members of Luis’s team were able to speak with Luis this weekend and found him in good spirits. Luis assured his loved ones that the facility at which he’s being detained in New Mexico is actually far superior to the one where he was first taken in New Jersey, and that he is much better off than most of the other detainees there (nearly all of which are young Mexican nationals with no knowledge of English, no papers, no networks or resources, etc). Luis also made clear that he is overwhelmed by the generosity shown to him by friends and strangers alike, and by the efforts of his family and friends to bring him home.

Luis will next meet with his lawyer on either Monday or Tuesday to discuss steps toward his bond hearing. The community fundraising—raised through this GoFundMe campaign—will go directly to pay Luis’s attorneys’ retainer. Then, if the judge grants Luis bond, that can cost $15,000 or more. At that point, Luis’s legal team will petition for a change of venue in hopes that they can move his immigration hearing back to be heard by a New York judge. (Because the population in New Mexico is so small, the state has no immigration courts. This means that if Luis is denied bond, he must go before a judge in either Denver, CO or El Paso, TX). The general consensus of Luis’s attorneys is this: Getting bonded out—and being allowed to stand before a judge in New York—is Luis’s best shot at a good outcome.

To help Luis achieve this outcome, Chimene Macnaughton is collecting character letters from the East End community to add to Luis’s legal file. Family, friends, and local schoolmates are encouraged to write their recollections of Luis, with an emphasis on his ongoing contributions to our community. If you would like to contribute a letter to the cause, please email yours as an attached Word document with the subject line “LUIS MARIN LETTER” to Chimene at wainscottmain@gmail.com.

And finally, if you would like to send Luis a personal letter or package while he is detained, you can reach him at this address:

Update as of April 13, 2018: Thanks to the tireless efforts of Luis’s family, friends, and two work families at Nick & Toni’s and Wainscott Main, Luis was able to have a brief consultation with an immigration lawyer yesterday in New Mexico.

“This is our first piece of good news since Monday morning,” says Chimene Macnaughton, Wainscott Main’s general manager. Noting how their team had to scramble and shift focus from retaining a New York-based immigration attorney to locating, vetting, and engaging a New Mexico-based one, after finding out via ICE’s locator website that Luis had been transferred from Bergen, New Jersey to Cibola, New Mexico.

“I worked the phones to find the best counsel for him,” says Macnaughton. “Only through our New Mexico contacts did I discover just how remote Cibola is, how some established immigration lawyers in Santa Fe won’t even go there and don’t take detainee cases, strictly because they can’t get to Cibola multiple times a week.”

Still, the team was able to secure Luis a consultation with one of the best immigration law firms in New Mexico, and Luis’s family is hopeful that they will be able to hear from him soon.

We will continue to update this story as more news about Luis trickles in. In the meantime, please consider donating to the GoFundMe campaign that has been created to help bring this beloved member of our food community home.