What does one do with sumac in the kitchen? We’re glad you asked. 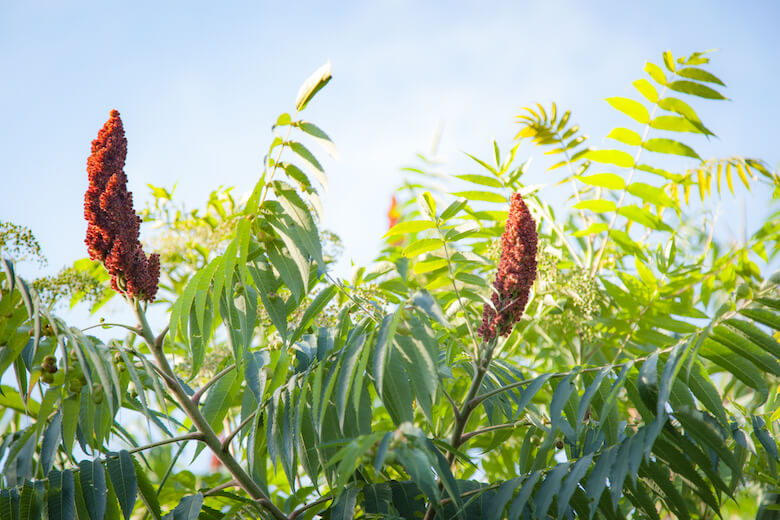 Not all sumac is poison. • Photo by Lindsay Morris

If your sole association with sumac is that it itches upon skin contact, you’re not alone. Along with ivy and oak, sumac completes a trifecta of What Thou Shalt Not Touch when left to one’s own devices in the woods. And, indeed, the poisonous variety of the plant, toxicodendron vernix, a tree that can grow up to 30 feet in height, produces a resin called urushiol. When this resin makes contact with human skin, an itchy and sometimes painful rash occurs.

But not all sumac is poison (actually, poison sumac betrays itself with its noticeable white berries). There are 35 flowering species of the plant, most of which are harmless to humans, and some of which are quite helpful. The tree is known for its bright red berries, and the berries of certain species—rhus glabra, rhus typhina, and rhus copallinum, notably—can be dried, ground, and used in traditional Middle Eastern and North African cooking.

Sumac is, in fact, one of the principal ingredients in the spice blend za’atar. Za’atar also includes thyme and sesame seed, giving it a floral, fragrant, herbal, and nutty flavor profile. Sumac only enhances these qualities.

Technically, sumac is not defined as a spice, since it hails from the flower of the plant, which is actually a member of the cashew family. But, for the purposes of this investigative foray, the word spice will do just fine. Although it ultimately landed on Middle Eastern soil, the spice’s provenance is subtropical, hailing from Africa and North America. The spice also enjoys a storied history. Over 2,000 years ago, Greek physician Pedanius Dioscorides referred to sumac’s health properties in his comprehensive medical book. It has since been used as an astringent, an antiseptic, a tonic, and a lemonade (minus the lemons). Feverish patients were said to have benefitted from sumac’s “cooling” properties. Indigenous populations in North America used sumac in beverages, producing a drink similar to beer.

The plant’s berries bloom from early spring through late fall, depending on where you happen to live (out East, our season is notably shorter), and it is possible to pick, dry, and grind your own, assuming you know what to look for. The staghorn sumac (or rhus typhina), for instance, blooms in fall and boasts vibrant red cones reaching up from fuzz-covered branches. Once these fiery cones have ripened, snip the bloom, take them home, and hang them to dry. A simple spice grinder will do the rest of the hard work, once the berries have shriveled.

But What Do You Do With Sumac in the Kitchen?

The most important question arises, however: What does one do with sumac in one’s kitchen? For me, an obvious choice is lamb, a meat selection favored by Middle Easterners. A dusting of sumac, plus ample amounts of salt and pepper, offer a lemony, deep, nearly smoky flavor that highlights the meat’s earthiness. In fact, sumac can be used to amplify just about any dish: baba ghanoush benefits from the spice’s brightness, as does hummus. Even a cold, crisp melon salad, comprised of whatever happens to be market-ripe, sprinkled with the right amount of sumac, will rise from the depths of ordinary.

Traditional sumac “lemonade” is essentially a tea steeped from staghorn sumac, which mimics the flavor of lemons. But I prefer my own version, a sparkling pink soda that uses actual lemons, too. Better yet, you can leave the foraging to someone else; I use powdered sumac in my potable.

Combine two cups water with two cups sugar in a small saucepan and heat over medium heat, stirring until the sugar has dissolved. Add three tablespoons of ground sumac (if you have trouble finding sumac in your local grocery store, online spice vendors like Penzey’s carry it) to the hot mixture. Allow the mixture to sit for five minutes and then strain through a fine-mesh sieve. This syrup can be held in the refrigerator for up to a week.

But, if you wish to use it right away, fill a tall glass with ice, spoon in a quarter cup of the sumac syrup, and add one cup of club soda plus one tablespoon of lemon juice. Stir well with an iced tea spoon and drink immediately, with lemon wedges, of course. This bubbly version of a childhood favorite—pink lemonade—will convert even the most skeptic among us into sumac devotees.