Are You Ready for a Raw Milk Renaissance?

On both the North and South forks, East End dairy farmers are offering locals a creamy, unfiltered taste of the past. 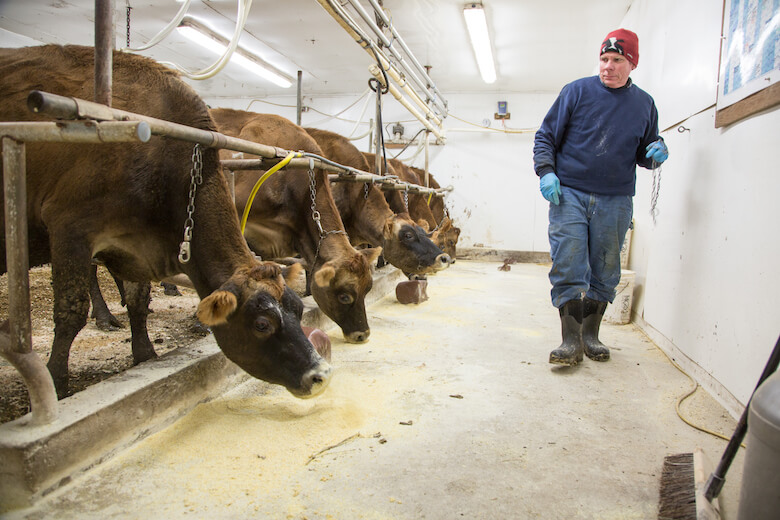 Claes Cassel works with the cows at Mecox Bay Dairy.

It’s 7 a.m. and still dark when I arrive at Ty Llwyd farm in Riverhead. A tinge of dark blue appears on the eastern horizon as farmer Chris Wines meets me in the yard. It’s mid-January and freezing as we make our way to the barn.

I shiver from the cold, but the reward for this early wake-up call will be worth it, my first taste of raw milk.

Ty Llwyd Farm (pronounced tee-clewed) is the only farm on the North Fork that sells raw, unpasteurized cow’s milk. Pasteurization is the process of heating milk to a specific temperature to kill potentially harmful bacteria.

New York’s Division of Milk Control and Dairy Services oversees all aspects of the state’s dairy industry. In order to sell raw cow’s milk, a New York farm must have their milk tested regularly for a variety of pathogens such as listeria, salmonella and E. coli.

Inside the barn, Chris’s father, David Wines, joins us as we enter the paddock. The cows eye me curiously as the two men open the gate and lead them to the milking parlor. 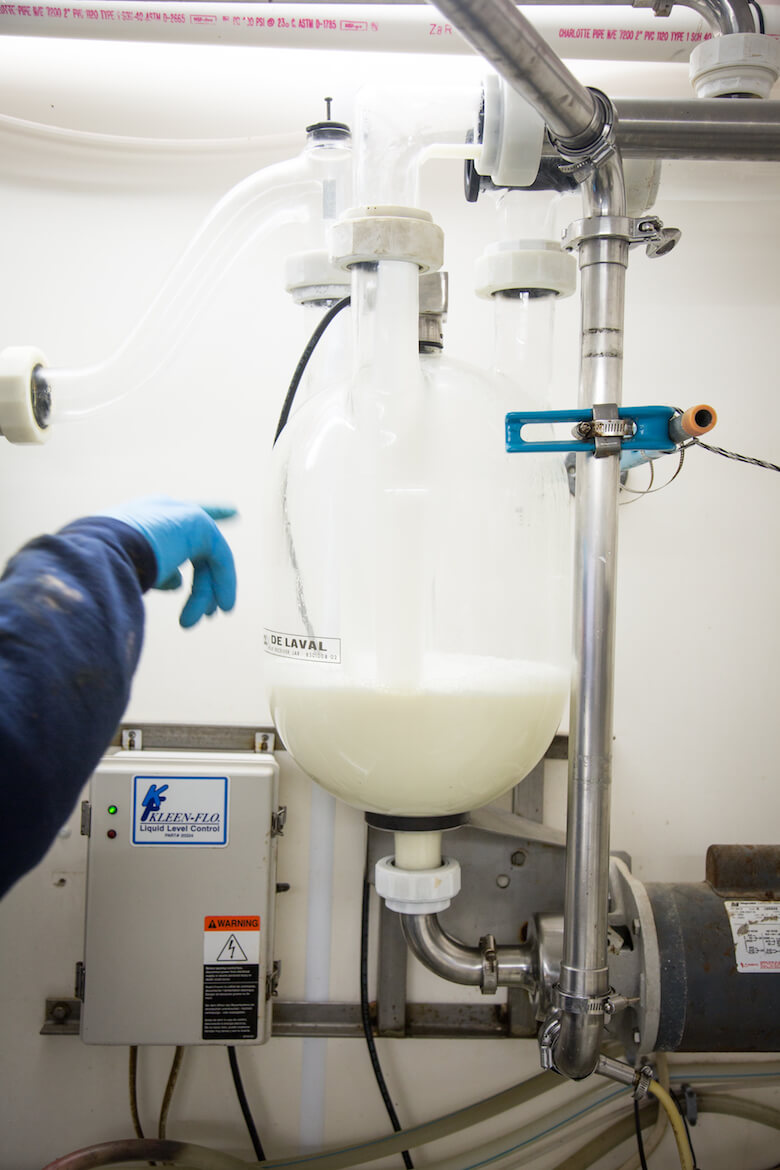 From Produce to Dairy

Ty Llwyd Farm used to be just a traditional produce farm. In 2009, Chris Wines bought his first cow from East Hampton’s Mecox Dairy Farm. He now has 19 Jersey cows, producing close to 67 gallons of milk a day. When asked why he decided to sell raw milk, Chris Wines is matter of fact.

“You can only buy raw milk on the farm,” he says. “Pasteurized is easily available, you can buy it anywhere. At some point, we might do pasteurized, too, but you have to find your niche.”

New York is one of only 26 states that sell raw milk, with restrictions, a chief one being the milk can only be sold on the premises.

For Chris Wines, finding his niche meant reaching back into his family’s past. His mother, Liz Wines, comes from a dairy background in her home country of Wales.

“Her father had a dairy in Wales,” David Wines explains. “He had a milk route, all raw milk. He left English pints on the windowsill every day at every house.”

“They were all dairy farmers on my mom’s side of the family,” Chris Wines says. “All of her uncles had dairy farms.” 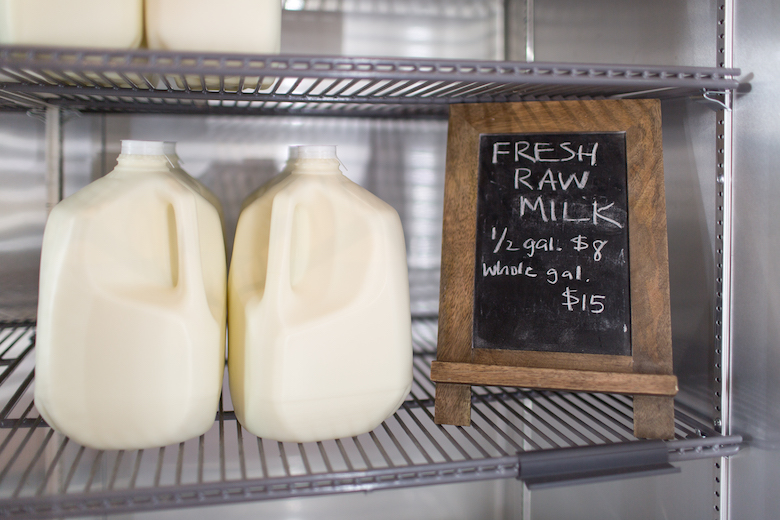 In the milking parlor, the Wines’s milking machine enables them to milk four cows at a time. Teat cups are attached to each cow’s udder, and the machine automatically milks them. A “pipeline system” pumps and then pipes the milk to a large refrigerated tank that cools the milk down.

The animals are familiar with the process and calmly wait for it to finish, their reward will be breakfast. By the time the first four cows are done, the next four are ready on the other side. In all, the entire milking process takes no more than 30 to 35 minutes.

The milk is then bottled and sold at the Ty Llwyd farm stand, where a sign notifies customers that the milk is raw. Another regulation requires that any leftover milk cannot be sold the next day, so every day’s milk is completely fresh.

When all the cows have been milked, they return to the barn for their meal and we head to the farmhouse. Ty Llwyd Farm’s cows enjoy a grassfed diet, subsidized with organic grain.

“It tastes better than regular milk because regular milk doesn’t really have a taste,” David Wines says. “Customers say its addictive, and parents come back to say their kids love it.”

“It tastes like milk, only better, creamier,” Chris Wines says. “I always drank a lot of milk, that’s why I got cows.”

Wrapping up the dairy tour with a sampling of Mecox Bay Dairy’s raw milk.

Without further ado, Liz Wines pours a glass of their milk and sets it in front of me. They all watch as I take a sip. The first thing that comes to mind is creamy, it tastes like cream, without the thickness. Having been raised by a mother who whipped real cream by hand, the raw milk has that rich, creamy flavor. I put the empty glass down, licking my lips and wanting more.

“In the summertime, I practically live on raw milk,” says Mecox Bay Dairy owner Art Ludlow. “We work from daylight to dark, and the milk is great. You’re not hungry, it’s refreshing and tastes good.”

Mecox Bay Dairy in Bridgehampton is the only dairy on the South Fork and a bigger operation than Ty Llwyd Farm, which is family owned and operated. Here cheese and beef are the main productions.

Milking is taking place in the barn as we enter. The cows are distracted with brick-size blocks of salt as the pipeline system gently pumps the milk into a large, refrigerated tank. Most farms have two daily milkings: morning and afternoon.

Ludlow also comes from a dairy background. His farm had a dairy at one time, but in 1959 his father sold the cows to focus on produce. It wasn’t until 2000 that Ludlow returned to his dairy roots.

“I decided to go into dairy because I wanted to do the value added,” he says. “The further processing of taking the milk and making cheese.” 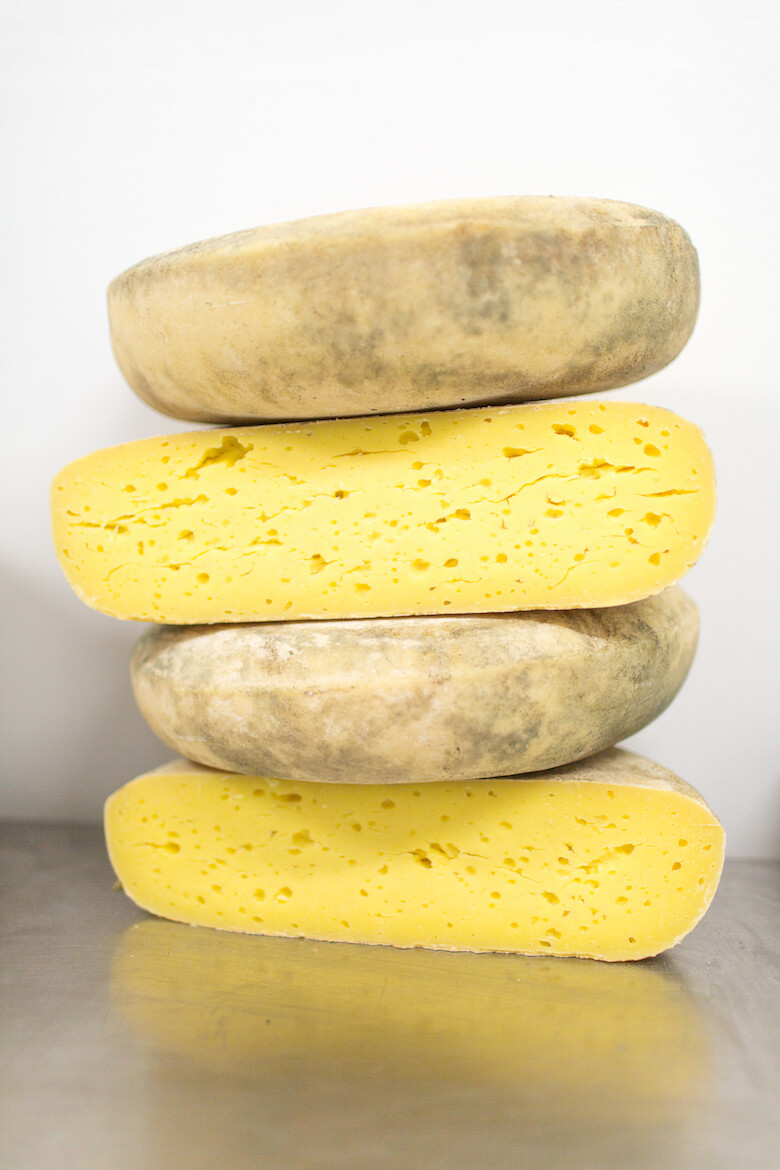 According to Ludlow, Mecox Bay Dairy produces close to 500 pounds of cheese a week.

Mecox Bay Dairy’s cows produce 75 gallons of milk a day. With cheesemaking taking place several times a week, the farm produces close to 500 pounds of cheese a week, according to Ludlow.

“The raw milk is sort of an ancillary thing, I’m not basing my business on it,” he says. “There are three types of people who want raw milk; young people who want to get back to nature; immigrants, either Latin American or Eastern Europeans who see the cows and think back to their childhood; and people who are trying to fix ailments like intestinal disorders, skeletal issues, Lyme disease. There is definitely an interest in it.”

In fact, as we speak, a young man enters the farm store to buy a gallon of raw milk.

“It’s the best, you can literally live on it,” says Ashley Koral of Bridgehampton.” I had a lot of stomach problems, headaches, and it helped cure everything. I’m lactose intolerant, but I can drink this, it’s a completely different thing.”

Ludlow serves me a cold glass of his milk. It’s so sweet and creamy, I have to remind myself that the fat content is about 5 percent, or I would drink a glass every day.

While many insist raw milk has miraculous health benefits, that remains to be seen. In the meantime, this superfood is delicious in coffee, tea, hot cocoa and on its own.

“The milk is always available, the stand is always open,” Ludlow says. “It’s a shame most of the world doesn’t know what real milk tastes like.”

While both farms are in the dairy business for the long haul, neither sees this as a trend catching on with many farmers.

“To milk cows, you need a lot of infrastructure and land,” Chris Wines says. “It’s too much work, too much investment.”

“I can honestly say that I’m working harder and making less money,” Ludlow says, laughing. “But I’m not looking back, I’m not complaining, it’s a challenge to make it a business.”