This Recipe Offers an Authentic Taste of Old Montauk

If you know this Depression-era recipe, you’re definitely a Montauk local. 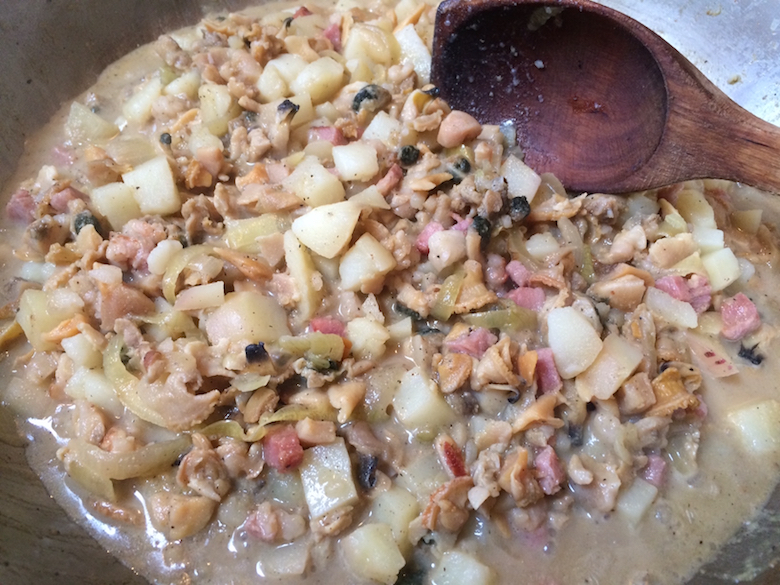 Most recipes are pretty clear-cut in what you’re making. The name describes what they are, while the list of ingredients helps the reader/cook understand the make-up of that specific dish.

Whether the recipe is a casserole, a stew or a cake, most of the time the name will immediately state what is being made.

Rarely does one come across a dish that’s a complete mystery as to its origin, as well as its name.

That was the case with the Montauk Starve to Death, which I came across several years ago, while flipping through an old East Hampton cookbook and was immediately intrigued.

The ingredients are normal enough; clams, potatoes, onions and salt pork, which are the basics of many traditional East End recipes like clam pie and numerous clam chowders, but this dish is served on toast and what to make of that cryptic name?

The recipe for Montauk Starve to Death, which has appeared in several old East End cookbooks over the years, is attributed to Frank Tuma Senior. 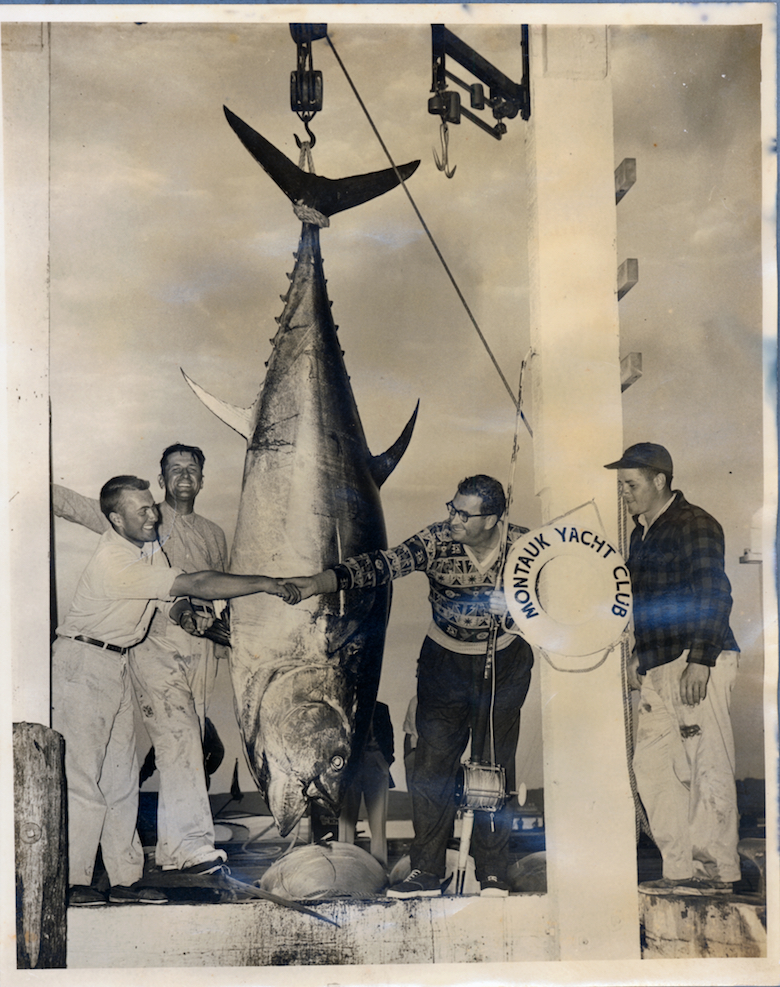 The Tumas offer their congratulations on a very big catch. • Photo courtesy of the Montauk Library

Frank settled in Montauk in the early 1900s, fishing those waters for decades. His son, Frank Junior, soon joined him, and both are now synonymous with the historic fishing legacy that is Montauk. The Tumas created and built a prosperous family business that included a successful fishing charter business, Tuma’s Dock and their bait and tackle shop.

I recently had the opportunity to speak with Frank Tuma Junior, now 92 years old and still living in Montauk, about the story behind the Montauk Starve to Death.

“It was created by my parents,” Mr. Tuma explained. “Basically in Montauk, during the Depression, you had to live on the fish you caught and things of that sort, so we ate a lot of clams and fish.”

According to Mr. Tuma the actual dish was created by his mother, Hilda, using the two ingredients that were most abundant and available on the East End back then: clams and potatoes. Chopped and fried together with some onion, salt pork and seasonings, it turned into a thick type of hash, that was served on bread. 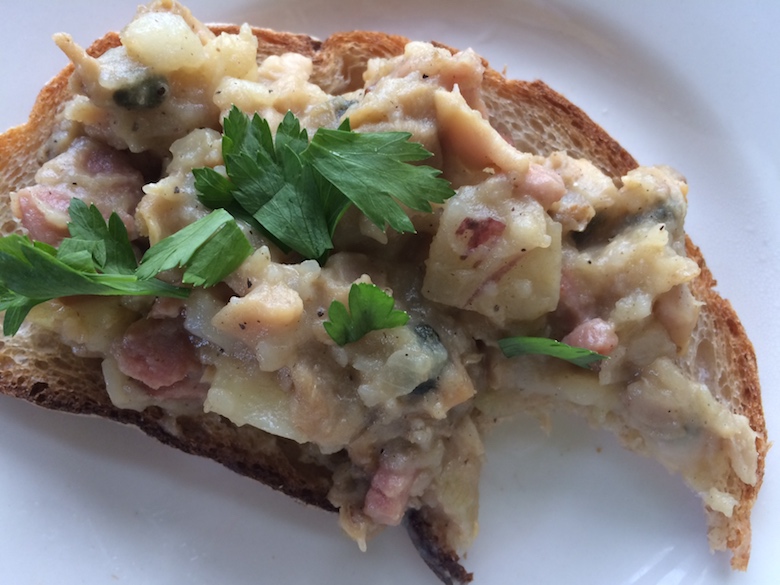 The dish was created by Hilda Tuma, using the two ingredients that were most abundant on the East End: clams and potatoes. • Photo by Monique Singh-Roy

“Women had to be a bit more creative in what they did in the kitchen, putting meals together,” Mr. Tuma said. “My mother was a really good cook and she would make [Montauk Starve to Death] for dinner and it was very good.”

As to the unusual name of the recipe, Frank Junior attributed that honor to his late father.

“My dad was always great at giving names to people and to things, so he gave it that name because it was something that kept the family fed, in good shape and filled up,” he said.

The recipe was eventually submitted by the senior Tuma for the first edition of the Montauk Guide and Cookbook, that was published by the Montauk Chamber of Commerce in the late 1950s.

Duane Lewin, a cook and former owner of the Lighthouse Deli in Aquebogue, remembered cooking something very similar during the days he worked as a boatman out in Montauk.

“I knew the Tuma family and used to move the boats out there in the early 1970s,” he said. “When you come home and there’s nothing around, I’ve opened up a few clams, fried them up in a little butter and garlic, then put them on toast myself. I didn’t know it was a recipe, but it was a meal.”

Following the original recipe, Montauk Starve to Death is a tasty and hearty meal that will fill up even the hungriest soul on a cold Long Island day. The Worcestershire sauce adds a little extra tang to the dish, that could in all theory be described as clam chowder, served on toast. It is thick, chewy, salty and briny, exactly what you are craving when you’re really hungry, or as Mr. Tuma would say, starving to death. 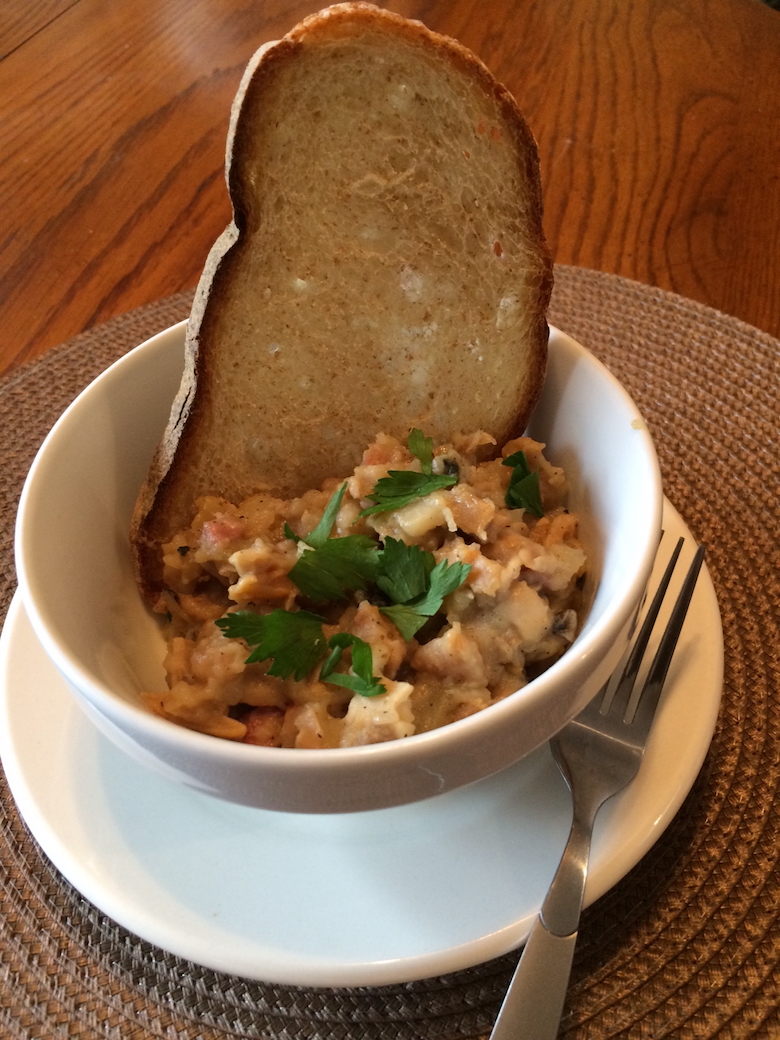 Montauk Starve to Death
Courtesy of Frank and Hilda Tuma

NOTE: This recipe makes a lot of food, I easily cut this down to about a quarter of the listed ingredients to make a substantial meal for two, with leftovers. Hold off on the 1/2 teaspoon of salt til you’ve cooked the dish and tasted it, as the salt pork, clams and Worcestershire sauce already contribute plenty of salt.

This story was originally published in February 2017.