Love in the Time of Artistry

Today, we’re wrapping up our series of East End love stories with a look at the beautiful marriage of artist Bastienne Schmidt and photographer Philippe Cheng. 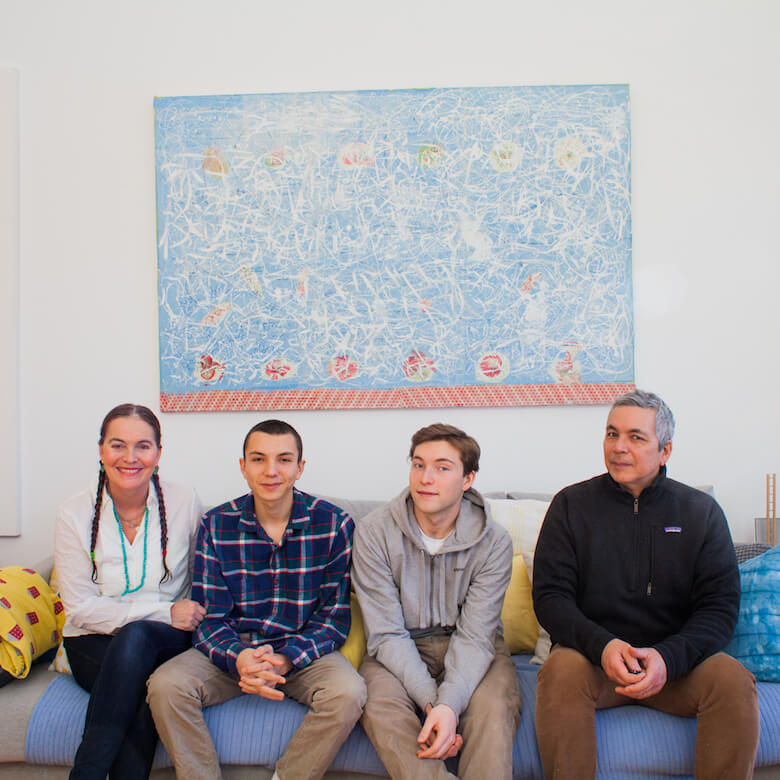 In celebration of Valentine’s Day, we’re looking at some of our favorite couples in food and drink on the East End. On Monday, we kicked things off with the love story of chef Jason Weiner and artist Almond Zigmund. Yesterday, we continued to spread the love with the story of Kareem and Karen Massoud. Today, we’re wrapping things up with the romance of artist Bastienne Schmidt and photographer Philippe Cheng.

“A sense of humor is essential in a long marriage,” says Philippe Cheng.

And it’s a good thing that both Cheng and his wife, Bastienne Schmidt, have such a great one: Schmidt recently suffered a fall off the Jitney, when returning from the Woman’s March in Manhattan. She broke both tibia in her beautiful legs and will be laid up for quite a few weeks.

When I arrived to do their interview and Cheng told me what had happened, I told him we could do it another time.

She is a tough, resilient individual. She was born in Germany, raised in Greece and traveled and lived all over with her archeologist father. Cheng’s mother is Canadian and his father was born in mainland China. Both come from families with five children.

They were working at Magnum when they met—Schmidt was working in the darkroom printing and Cheng was assisting different photographers. They went out to dinner and they took a set of photo booth pictures. They cut the strip in half and each took two photos.  Five years later they re-united the strip when they got together again on Staten Island. They married and now have two sons, Max, 18 and Julian, 16.

As artists who work at home, they respect each other’s space.

“We get into a rhythm,” says Schmidt.

They spend a lot of time together so see no need for date nights. As the boys were growing up, they did things together, as a family, and as part of the Hayground community where their kids went to school.

“There are pleasant surprises [in a marriage],” says Cheng, comparing his own to a garden. “Like when the arugula re-seeds itself and you reap the reward.”

“Marriage takes work,” he continues. “It looks effortless but it takes time and commitment. Living as a family, you plant the seeds and watch them grow.”

Together, Cheng and Schmidt make a living and create meaningful work together.

“There will be an exhibition with one of my Mindmaps, and the maps that we created with the children, that will open at the Parrish on February 3rd.”

Both Schmidt and Cheng have their own studio at home—art and life flowing one to the other.

“Our model is the Bauhaus couples who worked together as well as Americans Charles and Ray Eames,” says Schmidt.

When asked who does the cooking, Schmidt says she does most of the day-to day but it depends on their schedules and who is working at the moment. They have a garden and use fresh local ingredients. Cheng likes to cook for dinner parties when they serve wine, like Wolffer Rosé in the summer or Channing Daughters, both local wineries. Schmidt doesn’t drink much, but Cheng likes a glass of good wine. He creates a visually pleasing arrangement of color and texture on the plate.

“As an artist, visuals are always important, color and flavor can exist at the same time,” says Schmidt.

Cheng sees recipes as a starting point. He makes rice and beans with tostones and is working on a chicken pot pie that he makes his own pastry for. Schmidt loves to make soups—carrot, ginger, sweet potato, every day meals to feed the family but they take turns.

They have different styles of cooking, too—Schmidt is creative and messy while Cheng is more systematic and neater, but still creative.

What Does Their Shared Future Hold?

“We want to continue with what we have,” says Schmidt, “and to travel together and perhaps work on projects together.”

Cheng is a bit more poetic. “To make a good soup, you need a good base,” he says, knowing that his and Schmidt’s base is about as good as it gets.

“Philippe is the most amazing partner,” adds Schmidt. “He’s the most incredible father.”

And together, they’re even more amazing still—two talented artists who are perfect complements for each other, amplifying the beautiful colors they each naturally emit.