Love in the Time of Paumanok 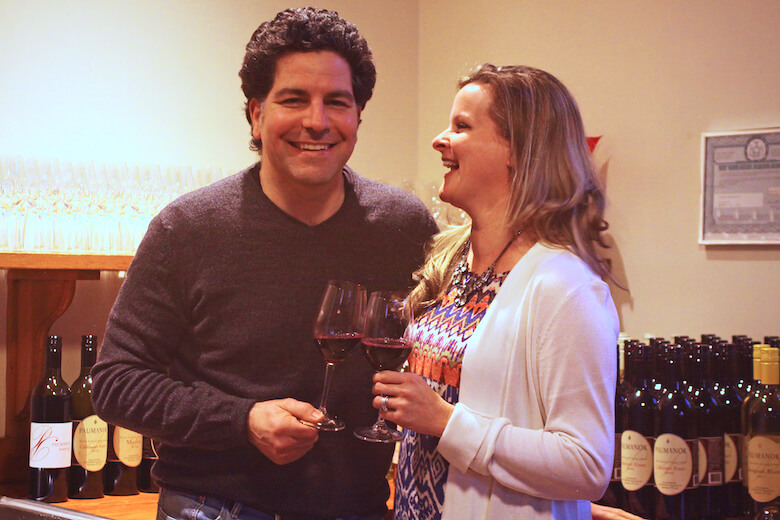 Kareem and Karen Massoud have been married since 2014.

Ahead of Valentine’s Day, we’re looking at some of our favorite couples in food and drink on the East End. Yesterday, we kicked things off with the love story of chef Jason Weiner and artist Almond Zigmund. Today, we’re continuing to spread the love with the story of Kareem and Karen Massoud.

How Kareem and Karen Massoud Met

Kareem and Karen Massoud make wine together at Paumanok Vineyards in Aquebogue—or rather, Kareem is the winemaker and Karen is the wholesale representative who sells his wine to restaurants.

“I was interviewing her for myself,” he says now with a laugh.

She got the job. Later, they both married other people and both divorced around the same time. They had been working together, enjoying a productive professional relationship, and were friends before they began dating in 2013. They got married in 2014. (Friend Jason Weiner catered their wedding.)

Kareem and Karen have two beautiful children, Katharina, two-and-a-half, and Thomas, almost one. In photos, they look like Kareem’s clones but Karen must have had something to do with it.

How They Combine Business with Pleasure

Kareem and Karen’s favorite restaurants include any of Tom Schaudel’s eateries, such as Jewel in Melville or A Mano in Mattituck; Bricks and Rye in Greenport; and North Fork Table. For their frequent date nights, they are always working. They kill two birds with one stone and combine business with pleasure by visiting restaurants they sell wine to or would like to have as future clients.

They had dinner at Eleven Madison Park in Manhattan and they ended up selling wine to them. Tough job. But Kareem loves being a winemaker and says they make wine for the life style it enables them to have.

Kareem is master of the grill station. Karen sticks to cooking mostly chicken and vegetarian dishes (though her cassoulet wins rave reviews).

“I love culinary challenges,” she says.

And here’s proof: she organized Paumanok’s 30th anniversary party with chefs like Christian Mir, Tom Schaudel, and Tod Jacobs preparing the food.  It was a huge success.

What Wine Do They Drink at Home?

They do blind tastings together, which lets them learn about other wines and expand their palate. They don’t drink every night, just most nights. After all, it’s their job.

Apart from their obvious physical attraction—Kareem and Karen were flirting during this interview—a strong part of their relationship is the work they share as they build the winery for the next generation. They are both good with people and hospitality and find comfort and support in each other.

Local lovers who have found a life and love among the vines.