Love in the Time of Almond

Ahead of Valentine’s Day, we’re looking at some of our favorite couples in food and drink on the East End. Today, we kick things off with the love story of chef Jason Weiner and artist Almond Zigmund. 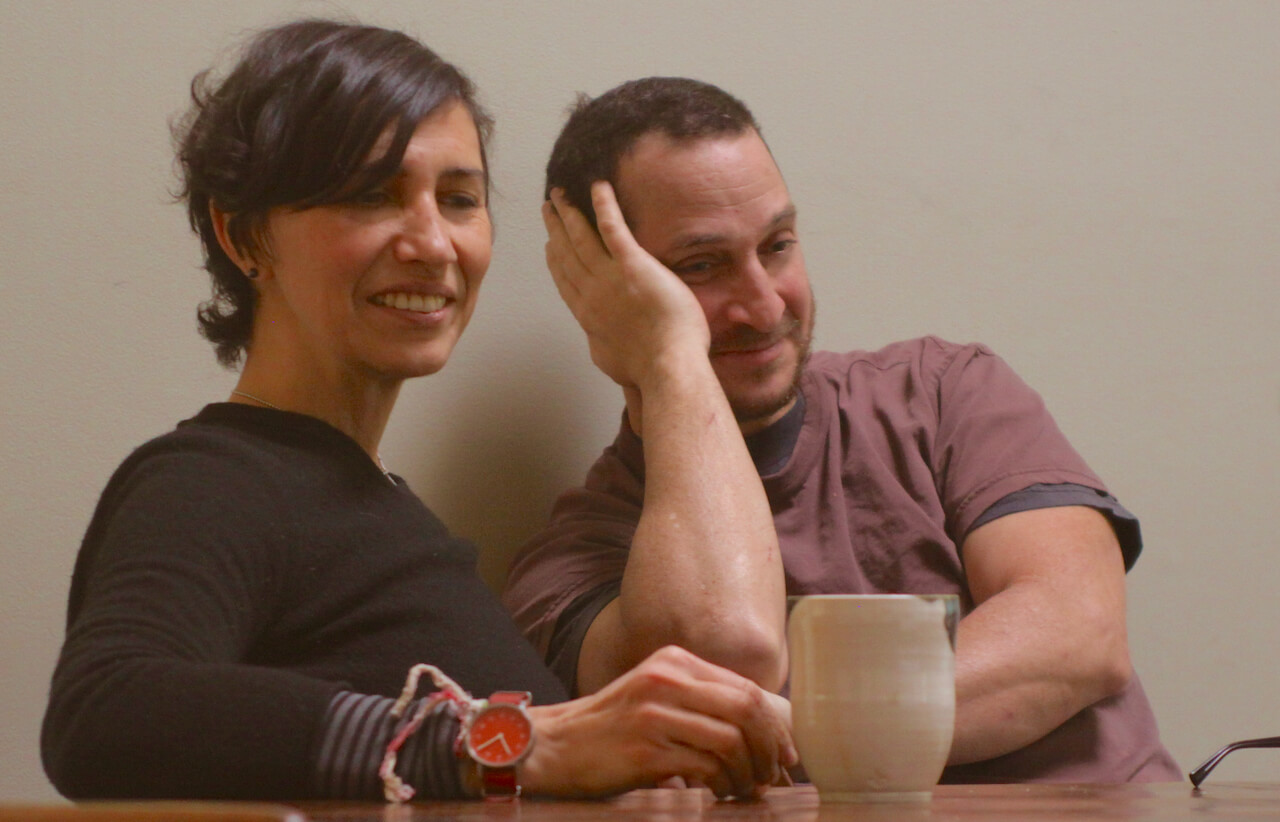 Almond Zigmund and Jason Weiner have been married since 1997.

History has given us many famous lovers. Antony and Cleopatra, Romeo and Juliet, Lancelot and Guinevere—but the East End has its own local lovers making wine, food and art. How did they meet? What keeps them together? And what can we learn from them?

Ahead of Valentine’s Day, we’re looking at some of our favorite couples in food and drink on the East End. Today, we kick things off with the love story of chef Jason Weiner and artist Almond Zigmund.

Almond Zigmund and Jason Weiner have known each other since they met at camp when Almond was 12 and Jason was 16. He worked as a cook at the camp. Jason is the chef-owner—along with business partner Eric Lemonides—of Almond in Bridgehampton, and Almond Flatiron and L&W Oyster in Manhattan. Almond is an artist with a studio attached to the house where she works most days. She has a show coming up in Las Vegas at the museum on UNLV’s campus and a group show at the Southampton Art Center curated by Janet Goleas, opening Feb 17.

In their 20s they had an overlapping circle of friends and Almond even dated a friend of Jason’s. Cut to the summer of 1997. Jason and Eric came out to the East End to open a restaurant, but that fell through. Jason had been sous chef at Nick and Toni’s. Then Almond came out for a weekend and got a job at Pacific East where Jason was then working. That summer they became a couple after a mutual friend planted a seed.

“What about Jason?” said the friend to Almond.

“What about Almond?” said the friend to Jason.

That fall, Almond left for graduate school in Las Vegas and Jason joined her to work at Aqua in the Bellagio, a Michael Mina restaurant. Jason convinced himself that it was a good career move—but in reality, he would have followed Almond anywhere.

The couple married in 1997 on Jason’s 40th birthday, telling his mother they were going out to run an errand and that was that.

Who Cooks at Home?

“We both do,” says Almond. “I am the ‘one pot wonder,’ and Jason prepares simpler food than in his restaurant, like cauliflower curry with rice, broccoli, steak, and rice, (he likes rice) and trays of potato latkes for Hanukkah.”

He has acquired Almond’s fondness for mint, feta and chick peas, and incorporates them into dishes at the restaurants. Almond doesn’t like the mess he makes.

“There’s not much of a flow in our home kitchen,” admits Jason.

Jason likes Almond’s coconut rice and tofu lasagna that he initially snorted at, but after tasting, thought it was very good. Almond eats meat but leans more toward vegetarian. They are CSA members of Amber Waves and use up everything in their allotted produce together.

Their daughter, Rive, who will be 10 in April, likes to cook. She attends the Hayground School where all the kids cook. She feels very comfortable in the kitchen at Almond and likes to give tours to her friends. Both Almond and Jason look after Rive and share child care, but Almond is more flexible with her time while Jason is in the city overseeing his two other restaurants.

Almond socializes with friends and their children when Jason is working. But they make time to be together as a family. Jason joined them in the south of France last year.

“Not often enough,” says Almond. But in the restaurant business, Jason works nights and is often in the city. When they do get out for a meal, however, “Montauk is our place to go,” they say.

They like South Edison, The Dock, East By Northeast, and Scarpetta’s. In East Hampton, Nick and Toni’s is a favorite. They also bring dinner home from the restaurant, their own personal take-out. Jason is a beer drinker and Almond drinks wine (but not a lot). She likes Pet Nat, a sparkling, champagne style wine from Channing Daughters. They do a trade of Almond’s art for wine.

Opening in late spring is a yet to be named take-out food shop in the empty space right next door to their Almond’s restaurant in Bridgehampton. They will sell rotisserie chicken and meats, along with cheese from Mecox Bay Dairy (where Art Ludlow believes that “Happy Cows Make Happy Cheese”). The shop will also carry an impressive selection of local produce—just in time for the summer.

“And a cookbook might be in the works in the future,” says Jason.

Lovers are artists, chefs and winemakers. They love their work. And they love each other. True love endures on the East End.