Meet the Only Kombucha Brand Made Entirely on the North Fork

Stoic Artisans Kombucha gets by with a little help from its North Fork farmer-friends. 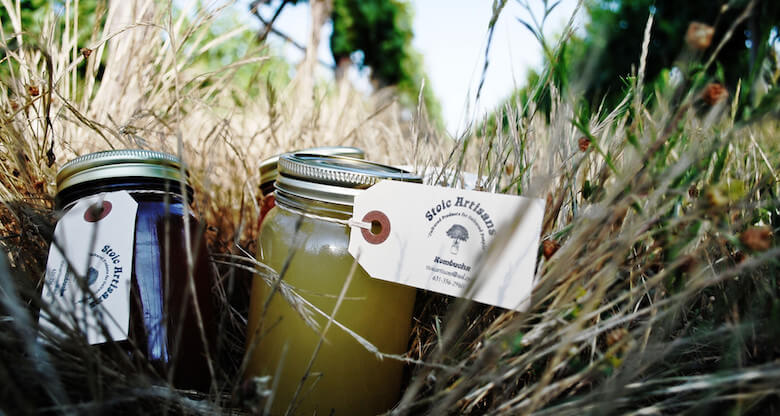 Made by Joe Hernandez and Brianna Hulmes, Stoic Artisans Kombucha is more than just a farmers market favorite; it’s a brand dedicated to supporting the farmers of the East End.

Joe Hernandez and Brianna Hulmes, the team behind Stoic Artisans Kombucha, are passionate about fermentation. They started drinking kombucha every day five years ago as a natural way to help with health issues like acid reflux and eczema. Kombucha is a fermented tea drink made from combining sugar and tea with a starter culture called a mother.

Hernandez and Hulmes found that drinking a cup a day really helped with their health problems, but they didn’t love the store-bought kombucha they were finding. So, after taking a course in Brooklyn, they started making their own kombucha in Woodside Orchard‘s commercial kitchen and selling it at farmer’s markets and to local shops and restaurants.

Hernandez and Hulmes live in Cutchogue and together produce the only kombucha made on the North Fork. Unlike some of the larger commercial brands that use extracts to flavor their kombucha, Stoic Artisans uses fresh, local, and seasonal ingredients as much as possible. They source apples from Woodside, fresh hops from Condzella Farms, lavender from Lavender by the Bay, and fruit and spices from Sang Lee, Anderson and Briermere. They drive to local farms and pick up spare produce that farmers need to sell and experiment with new flavors with mixed results.

“Melon didn’t work that well,” Hernandez said, noting that he and Hulmes buy organic when they can and always aim to source produce as locally as possible. “You can taste the difference.”

We’re back! Come visit us this & every Saturday this winter @riverheadfarmersmarket from 10-2. Get your refills of buch or your new jars! This week our flavors are #cranberryblueberry #ginger #applecinnamon. Can’t wait to see you all there! #fermented #stoicartisans #kombucha #kimchi #shoplocal #riverhead #farmersmarket #wintermarket

Stoic Artisans produces about 80 gallons a week, rotating 15 flavors throughout the seasons, with usually 2 or 3 at a time. Winter flavors include mango ginger and hibiscus, while spring brings strawberry rhubarb and lemon chaga (a medicinal mushroom). Summer flavors include peach mint and blueberry lavender, while fall brings cinnamon coffee, pumpkin spice and apple hops. The kombucha is fermented in professional wine vats and is naturally carbonated in the process.

Over the three and half years they’ve been in business, Stoic Artisans has seen slow, steady, and strong growth. Their kombucha is available at Sang Lee’s farm shop in Cutchogue, Circle M Beverage in Westhampton and at farmers markets in Southampton, Center Moriches, Port Jefferson, Sayville and Riverhead.

“We love supporting farmer’s markets. We would be here anyway even if we weren’t working!” Holmes said.

Come on down and fill up!! Strawberry Rhubard 🍓 is only here until the end of June!! Enjoy while you can. @southamptonfarmersmarket @portjeffersonfarmersmarket #strawberry #rhubarb #local #stoicartisans #farmersmarket #longisland 9-2 every Sunday!

At the farmers markets, you can bring your own growler to be filled, or buy a quart in a glass jar after trying free samples of the different flavors. Stoic Artisans also sells by the cup (in recycled plastic) or you can bring your jar back for a discounted refill. “Most of our customers were not kombucha drinkers already. We had to convince them, but then they say we’ve changed their lives,” said Hernandez.

Their kombucha will last 4-6 weeks in the fridge, though the flavor may change and get more sour. Hulmes recommends using kombucha past that timeline as a great flavored vinegar.

This year, Stoic Artisans added kimchi and German garlic sauerkraut to their offerings. Made in 10 gallon ceramic crocks, both are naturally fermented for 1-2 weeks and then last for months in the fridge. Like sauerkraut, kimchi is fermented cabbage. Originally made in Korea, it features Asian cabbage, garlic, and chili, for a pungent, spicy, sour mix. It often also includes other vegetables, like carrot and scallions. Hulmes plans to add other variations and flavors of kimchi and sauerkraut as well.  Hulmes and Hernandez are passionate about sustainability, healthy living and adding value to their customers’ lives. Eventually, they plan to open their own place and brew beer as well as kombucha, and maybe a combination of the two, often called kombrewcha. Hernandez is especially interested in making sour German-style air fermented beers.