Start 2018 off right: With great eats at the year’s greatest prices. 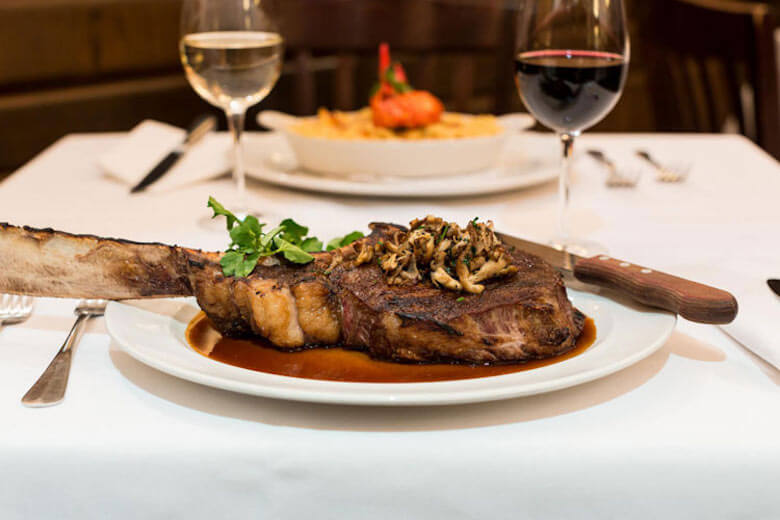 Summer may still be a long time away—but luckily so, too, are summer prices. • Photo courtesy of Bobby Van’s

Here’s what I’m totally obsessed with: Any East End restaurant that offers a dining deal for the locals in the off-season. While the colder months may mean dwindling daylight, it also means a surprising cache of secret dining options, available only to those willing to rough it through the slow months. Here are our favorite East End bargains that will fade with May’s first light.

I, for one, cannot afford dinner at Bridgehampton’s Bobby Van’s in high season, when a steak alone can cost upwards of $50. But midweek diners can be rewarded with an excellent deal. Sunday through Thursday, Bobby Van’s offers a $27 menu, which includes a choice of appetizer and entrée. Main courses vary, but the best deal on the menu is the 20-inch rib eye, served with mashed potatoes, a steak that would otherwise fetch about double, without any sides. Is there anywhere else in the Hamptons where you can get a legitimate steak for under $30? I think not.

This Sag Harbor space underwent a massive renovation last year. Today, it’s a glittery, comfortable, “be seen” bar with a dominant oven that produces superlative grilled things. The regular menu is a bit spendy, which is why it’s so exciting that they’re now offering a prix fixe meal Sunday through Thursday dinner and Friday and Saturday lunch. The $26.95 lunch bargain includes a choice of appetizer (onion soup, beef tartare, lentil salad) and entrée (croque monsieur, pain bagnat, Iacono Farm omelet). For the $34.95 dinner, it’s the same appetizers, an entrée choice of cavatelli, ratatouille, or cod, and a crème brûlée or “seasonal sundae” for dessert. Count me in.

David Loewenberg’s a local himself, so it makes sense that he would offer a discount to other locals. At East Hampton’s cozy Fresno, bar patrons can order the prix fixe menu (two courses for $30 or three courses for $35) until 6:30 each evening. Dining room patrons in parties smaller than eight can order the prix fixe all night. Dinner includes a choice of four appetizers, seven entrées (a few entrées, like the Duroc pork chop, have supplements), and, if you’re so inclined, seven desserts. All in all, it’s an array of affordable options for an area that often makes dining out the provenance of the élite.

Shelter Islanders already know plenty about this longstanding haunt and its prix fixe meals, but if you’re not on the Island, here’s the scoop. The $35 three-course menu is available daily from 5 to 6 p.m. and includes a choice of five appetizers, six entrées (some of which contain a supplemental charge), and four desserts (I’m into the cheese plate, personally). The menu changes daily. This cozy, cool weather-friendly restaurant is among the best of the bunch Out East, and this is just one more reason to pay it a visit.

Welcome to Shippy’s Pumpernickels, a restaurant where time has stopped dead in its tracks. This cavernous, hyper German restaurant may not offer a technical “prix fixe” menu, but the bargains found here are worth the visit. Entrées all come with a soup or salad, potato, and vegetable, which means that you can dress up your rib-sticking knockwurst meal (several beef sausages, mashed potatoes, and sauerkraut) with a crock of rib-sticking onion soup. The restaurant offers weisswurst, bratwurst, kassler rippchen (smoked pork chops), sauerbraten, wiener schnitzel, and lots more. It’s a house of German delights for the meat lover. And if you can’t finish your massive lunch or dinner, you can always take the rest home for later. Sausages make excellent leftovers.