Ahead of New Year’s Eve, a Loving Look at the Teetotaler’s Bubbly

Seltzer is trending—and not just because of its unicorn-kisses connection. 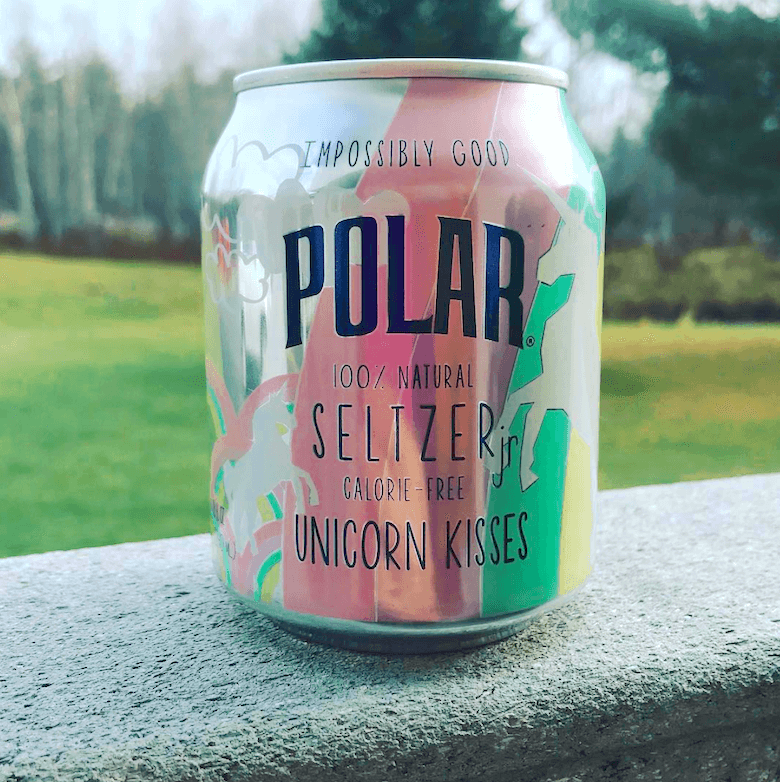 Seltzer is trending—and not just because some brands purport their flavors to taste like unicorn kisses.

Let me be frank: I don’t drink seltzer. Unlike my mother, who finds water unbearable and considers fizzy water ruthlessly refreshing, I prefer my water flat. Salt-less. Very, very cold. Rest assured, I wouldn’t survive more than a few months in Europe.

But I recognize a trend when I see one. Take, for example, my childhood friend J.R. Gallagher, who recently introduced me to the underground world of seltzer consumption. For years now, J.R. has been cultivating a certain appreciation for the teetotaler’s bubbly. Along with some of my other Massachusetts-bred friends, he collects—well, drinks, really—the limited edition flavors produced by Worcester-based Polar Seltzer. (In case you weren’t privy, Polar produces a line of hard-to-find seltzers, which have developed a cult following in New England. Flavors include “Unicorn Kisses,” “Yeti Mischief,” “Dragon Whispers,” and a host of other unquantifiable tastes.)

For a while, I thought that maybe the seltzer-sampling craze was endemic to New England, until I received an invitation to join a private Facebook group called Now Fizzing. Now Fizzing has 2,932 members (including J.R. and, as it happens, a college friend whom I never knew was an impassioned seltzer drinker) and dedicates itself to the culture of the Good Stuff. That means photographs, flavor profiles, product reviews, social media love letters, and guides to where to buy the elusive secret flavors. The tag line for the group is “Hot Seltzer News As It Happens.”

There is some debate among fizzers as to what makes the perfect seltzer. Some drinkers stand fiercely behind their citrus flavors. Some contend that “French” brand La Croix—one of the more expensive seltzers on the market—is the best available. Low-fi imbibers make a compelling argument for drug store brands, like the Duane Reade/Walgreens brand Nice! (which comes in a wide array of flavors, including strawberry-kiwi, peach, black cherry, and ginger peach).

Cause a stir at your next holiday gathering with fizzy mocktails! 🍹Head over to our Twitter (@LaCroixWater) for a chance to win this mocktail kit. ✨ 11 random lucky LaCroix Lovers will be chosen to win! #12DaysOfLaCroix

But let’s go back a little bit. At its base, seltzer is water with carbon dioxide and, sometimes, sodium chloride (salt). Until World War II, American seltzer was known as “soda water,” owing to the sodium salts it contained, which contributed to the drink’s flavor and acidity. “Seltzer” became known as such in the 1950s, a reference to the German town Selters, which is home to a renowned mineral spring. Soda siphons—dispensers that maintain the drink’s carbonation—rose in popularity in the 1960s and then fell again when the 1970s gave way to richer, more hedonistic drinks.

The introduction of the Soda Stream, as well as a strategic marketing mission propagated by seltzer producers, has forced the drink back into the spotlight. It’s a trendy, trending drink—and, apparently, nearly 3,000 secret members agree.

Back to those Unicorn Kisses, or whatever. Well, I couldn’t get my hands on any of the Polar specialty flavors myself, not for lack of trying (friends suggest frequent visits to a local bodega, not exactly a possibility in the Hamptons, and one friend suggested mailing me a case, but that seemed impractical). Still, I surveyed some devotees for insight into what I was missing.

One friend described the limited edition flavors as reminiscent of  “Sweet Tarts or Smarties.” In her estimation, “they all kind of taste the same.”

But J.R. begged to differ. The 2017 limited edition Polar summer flavors only came in eight-ounce cans (“climate killers!” J.R. said). Unicorn Kisses was his favorite. “Tastes like a rainbow,” he told me. “Not like a Skittles rainbow. Maybe more like a Spree rainbow. This is the flavor that is always the hardest to find.” Next: Dragon Whispers, a close second, with a “grape twang to it.”

The Yeti Mischief was “lime and cherryesque,” he said. “This was the first one I could find after driving around like a psycho, store after store. I bought two cases.” Which leaves the—to hear him tell it—disappointing Mermaid Songs, which “tasted like plain seltzer with a few rusty nails in it.”

Polar’s winter flavors were released in early October: Blood Orange Sangria (not “very overwhelming”), Ginger Lime Mule (“The best of this class”), Cranberry Cider (“Pretty strong taste. Not for the faint of heart. I like it, but not 12 in a row.”), Winter Citrus and Berry (“This one kind of tastes like you’re inside your friend’s nana’s armchair and can’t get out of it.”) and Blackberry Citron (“Delicious. This one I could drink 12 of in a row.”)

If you think that drinking 12 cans of seltzer in a row is obsessive, then you’re probably not a Fizzer (guilty as charged, but I respect the dedication). As the New Year approaches, and the non-teetotalers raise glasses of Prosecco or Cava or Champagne with midnight looming, consider an alternate world, where the fizz—and not the alcohol—is entirely the point. And good luck hunting down that Blackberry Citron.