In Hampton Bays, Edible Wreaths Showcase the Beauty of Our Local Bounty

Meet the woman who forages for festive beauty on the East End. 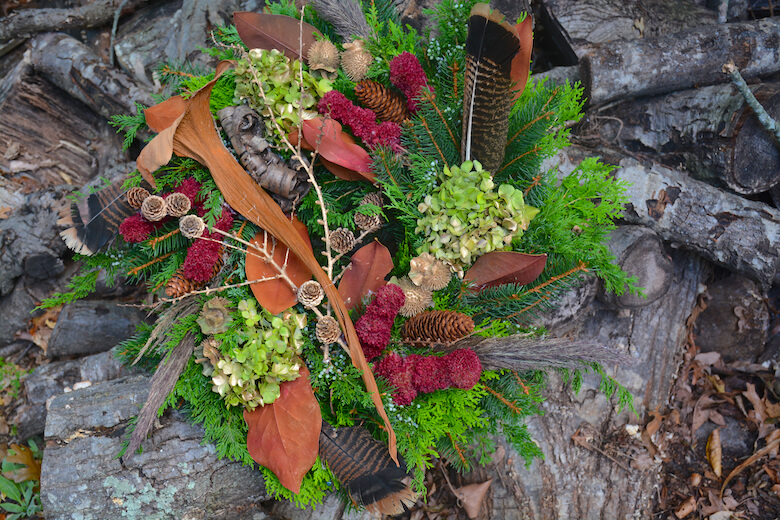 Diana Conklin is always looking for “treasure.” But her idea of treasure is not what most people have in mind.

“Treasure is when I go out and find something in abundance,” she explained. “Not a new plant, because I’ve been doing this forever, but when I find it in abundance.”

Ms. Conklin is the creator and owner of Everlastings by Diana, a floral design company that uses dried flowers, herbs, fruits, vegetables and other plants in creations that include floral arrangements and wreaths.

Ms. Conklin’s latest “treasure” is an indigenous plant called solidagos, a member of the goldenrod family.

“They dry so nicely. It’s like baby’s breath, but yellow,” she said. “So that’s treasure when I find it in abundance.” 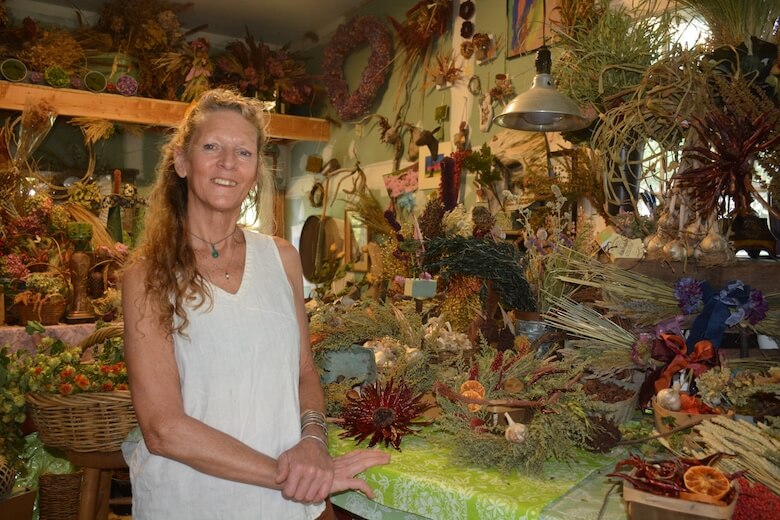 A native of Bridgehampton, Ms. Conklin studied art at Pratt Institute before returning home and starting her business nearly 35 years ago.

“This has been my passion since I got out of college,” she said. “I grow, buy and wild-gather a lot of things, so it’s a mixture of everything.”

Ms. Conklin’s property is like stepping into a scene from the classic children’s book, “The Secret Garden.” Flowers grow everywhere and the backyard is a bountiful garden in summer, full of plants, herbs, and vegetables. Birds and butterflies quietly flit from plant to flower. It is from here, as well as the family farm in the Hayground section of Bridgehampton, where she gathers her materials.

“I grow my own hops, and a lot of grains like wheat, rye, oats, flax, and sorghum,” she said. “Last year’s garlic hung in the basement all year and we never got to them, so they dried, and now they’re gorgeous and rustic just like that.” 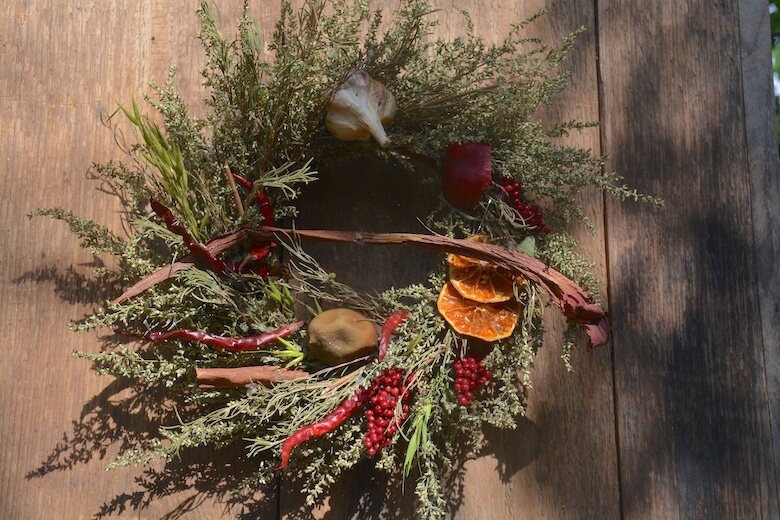 Some of Conklin’s creations include culinary wreaths, like the one pictured above.

The garage of Ms. Conklin’s Hampton Bays home has been converted into an art studio, where she works on her creations. The tables are full of dried materials like apple and orange slices, artichokes, pomegranates, garlic, peppers, okra, cinnamon sticks, star anise, bay leaves and hickory nuts. From the ceiling hang enormous upside-down bouquets of dried flowers, herbs like rosemary and strands of dried garlic. The smell is a delicious mix of scents.

“An herb is something that’s considered to have a use, like medicine, crafts, eating, or flavoring things,” she explained. “I also use a lot of things that grow on the roadsides, as well as in the fields.”

In her studio, a basket of bright red berries, that resemble bittersweet, is actually Brazilian pepper berries, which Ms. Conklin buys when visiting Florida. A basketful of dried purple flowers, that could be mistaken for lavender, is actually oregano flowers. Even dried honeycombs from the family farm’s beehives are used.

“I haven’t really figured out a use for the honeycomb, but I would break a piece off and put it in a wreath,” she said. “I see beauty in that.” 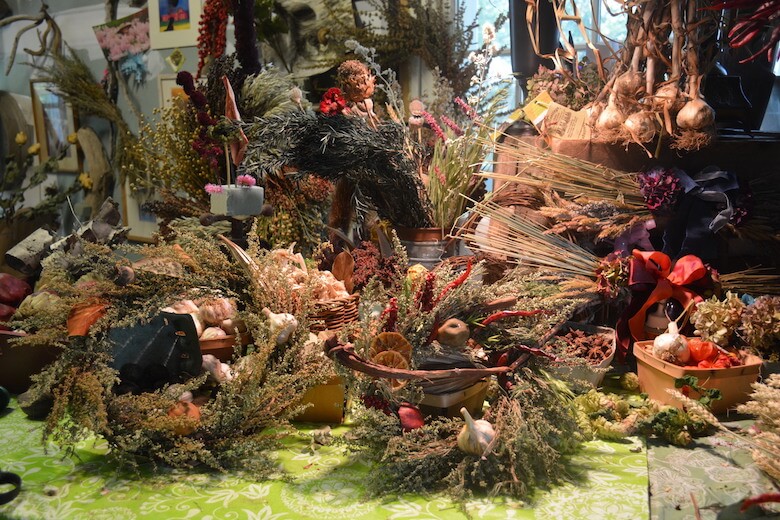 During summers, when Ms. Conklin works at the Green Thumb Organic Farm, she forages a lot of materials during her commute between Hampton Bays and Water Mill. The rest of the year she focuses on her flower and herbal designs. Her wreaths are stunning custom ordered creations made from everything she has grown and collected.

But these days teaching and speaking engagements have become such a big part of Ms. Conklin’s life, she has little time to make her creations, choosing instead to show others how to make their own wreaths and floral arrangements.  She especially loves passing her creative inspiration and excitement on to her pupils.

“There’s so much abundance, every day I look at the weeds on the side of the road,” she said.  “I plant identify and think to myself, ‘Wow, I may have to stop here some time! I love when I can light that lightbulb in people’s heads and make them see that even when they’re stuck in traffic on the side of the road, there’s a lot of treasure out there.”

For more information about taking a holiday wreath-making class with Everlasting By Diana, visit Everlastings.net.