Kombucha on Tap Arrives on the East End (Finally!)

Enjoy it at Sagtown in Sag Harbor and Feelin O2 Good in Riverhead. 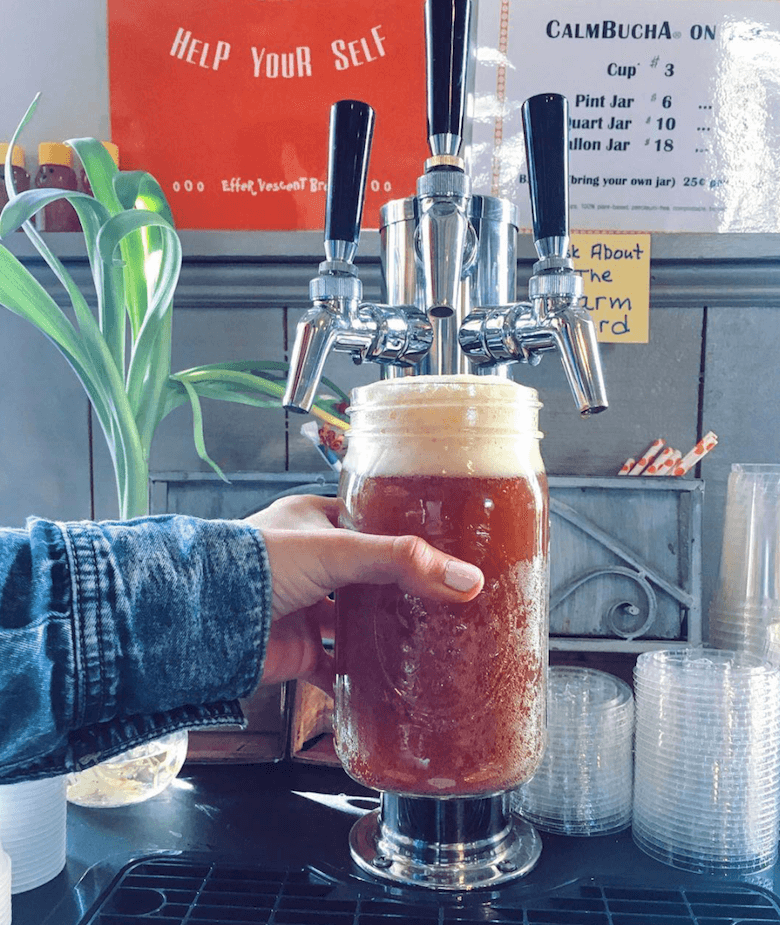 In Eugene, Oregon, it seems like no matter where you go, you can order a pint of kombucha. And it means that everything—from a slice of pizza to a cut of steak—can somehow feel healthy. The active enzymes in this fermented tea help invigorate a tired digestive system; the probiotics restore a healthy gut. But here on the East End, we were busy buying bottle after $5 bottle of California kombucha, until someone finally tapped the keg.

Even though there are a few health-oriented places that make their own kombucha, like Simply Sublime in Springs, the idea of kombucha on tap was elusive until Sagtown owner Shane Dyckman hooked up with Matt Forest. Forest just opened Feelin O2 Good, an oxygen bar and wellness space in Riverhead that offers memberships and lifestyle consultations in addition to kombucha, supplements, alkaline water, and other healing services. Forest currently delivers kegs of kombucha to Sagtown on the South Fork, and to Aura, a yoga studio in Mattituck.

His reasons for bringing kombucha on tap to the East End are two-fold. First of all, the planet.

“Kombucha on tap stops adding waste into the Earth,” said Forest. “I’m trying to gain a consciousness about how bad the wastefulness is around the world, and to do my own part in the effort.”

In addition, it’s about the body.

“Chemicals leach from plastic,” said Forest, “and that destroys our digestive system. So we get away from plastic and into glass, and then from glass we would throw out into a refillable glass container. We are minimizing waste and promoting health.”

If you don’t have one of our glass bottles, you really should😎 Fill em up with ionized alkaline water🚰 or raw organic kombucha🌿 you won’t regret it – guaranteed.✔️

At Feelin O2 Good, you can get a 10-ounce cup of kombucha for $3.50, and refill it for $2. A 32-ounce glass container will cost you $15 the first time and $10 each refill. A 64-ounce glass growler is $25, and a refill is $19. The kombucha is actually Calmbucha, made lovingly by a young couple in the Hudson Valley. When Matt Forest tasted Calmbucha at a taqueria in Hudson, he decided to go to the fermentery to investigate.

“He started coming up with a pickup truck,” said Rae Leonard, co-founder of Calmbucha, which is based in New Paltz. “He picks up 20 kegs and brings it down to Long Island.”

At Sagtown, they’ve always carried bottled kombucha, but now that they’ve completed their renovation, they have expanded their offerings in many ways. This was another way to grow.

“We always have our eye on food trends,” said Danielle Clark at SagTown. “We were excited to incorporate something like this, which has a function as well as being a delicious drink. It helps with digestion, and is good for your immune system.”

You can buy kombucha by the cup for $5, or 32 ounces for $15, 64 ounces for $45, or a gallon for $5. They’re planning on initiating a discount for reusable containers, though currently refills are the same cost. With three flavors on tap, which will rotate seasonally, there’s always something new to try.

Leonard and her partner, Ami Fixler, had a feeling their Calmbucha was going to take off.

“We wanted to just put it everywhere we would want to go, because we knew other people would want it too,” she said. “Now in the Hudson Valley there’s Calmbucha at pizza places, yoga studios, farmers’ markets… Wherever we go, we want to have kombucha.”

They’ve gotten playful with their ingredients. Currently at Sagtown, you could go for the Mon Cherie, which has cherries, apples and cinnamon or All that Jazz: a fusion of jasmine flowers and ginger. Leonard’s personal favorite is the Rosemary Clooney, which has grapefruit and, you guessed it, rosemary.

“I’m at the farm right now ready to pick some rosemary,” she told me on the phone. “It’s a spiritual experience for me when I’m picking herbs. Maybe that’s why this one’s my favorite.”

Leonard and Fixler make eight or nine flavors at a time in their fermenterie (garage). And Leonard always finds the process magical.

“It’s a mystical, organic process,” said Leonard. “Mixing seemingly not healthy things, like caffeine and sugar, and combining them, the symbiotic culture of the scoby, the yeast, and the bacteria creates life and antioxidants and immune boosters and wonderful things that are really healthful. It’s transforming negative energy into positive energy.”