Fry bread and bluefish and chowder—oh my. 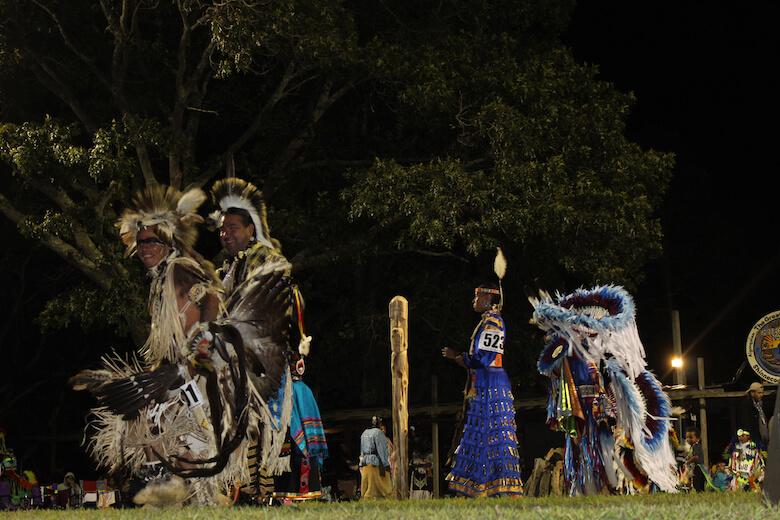 The Shinnecock Pow Wow is an East End tradition.

As we wrap up National Native American Heritage month, East End locals don’t need to look any further than the South Fork to celebrate the indigenous heritage living all around us.

From street names to fishing techniques to agricultural practices, the Shinnecock’s and Montaukett’s influence can be felt all over. And while their place in our area has not always been honored or celebrated, the annual Labor Day Pow Wow remains a beacon of indigenous heritage that we are so lucky to live amongst.

Held at the Shinnecock Indian Nation Territory in Southampton, the annual gathering marks the changing of the seasons, a time of sharing the bounty from the earth. Indigenous peoples travel from all over North and South America to partake in this celebration of heritage.

Throughout the three days, tribal members from all over the country wander around the festivities, some in full regalia, some not. Families seat facing the stage, watching the ongoing dances.

“I’ve attended every Pow Wow since I came into this world,” says Marguerite Smith, who, when pressed, declined to enumerate exactly how many that would be.

It was a chill September night at the 71st annual Pow Wow when I caught up with Smith. 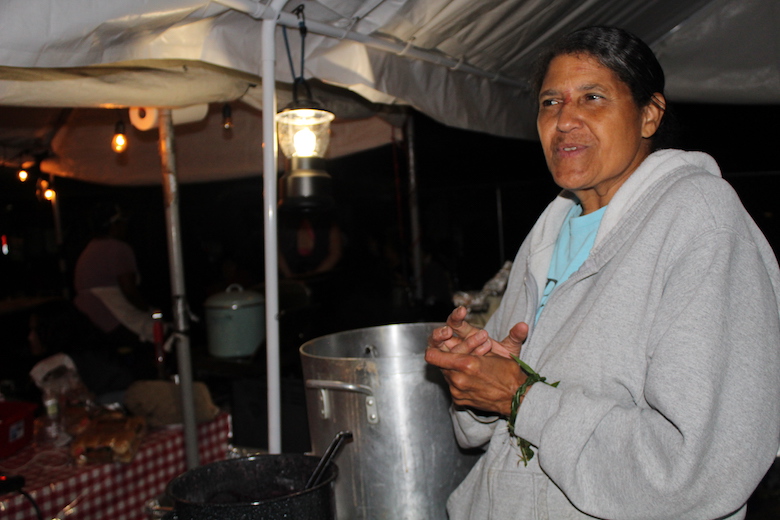 In addition to fry bread, Josephine Smith tries to feature healthy options, like her meat-free corn chowder with hominy and kidney beans.

Smith has early memories of the food house, where her mother and other women would shuck corn and shell beans for soup. Later on, someone would take it to their house and prepare. She recalls that, “the pots would go all night.”

Her mother would make clam chowder and succotash, although Smith says that her mother’s recipe was mostly cranberry beans, not the commercially-known variety that includes lima beans.

“For me, it is a North East native dish,” explains Smith. “It’s not succotash if you put lima beans in it.”

Cranberry beans come into the season at the end of the summer, and so do most of the traditional Pow Wow foods. Corn features prominently as you walk around the stands, as well as sea foods like a delicious blue fish hash from Wamp on Wheels.

Smith eating remembers stuffed clams as a child, and the way the elders would guard their different recipes. “I know of family disputes of what you’re supposed to put in [clam chowder]. If there was carrots and corn, it was not my mother’s,” recalls Marguerite.

As for a classic Pow Wow food, there is one clear answer: fry bread. 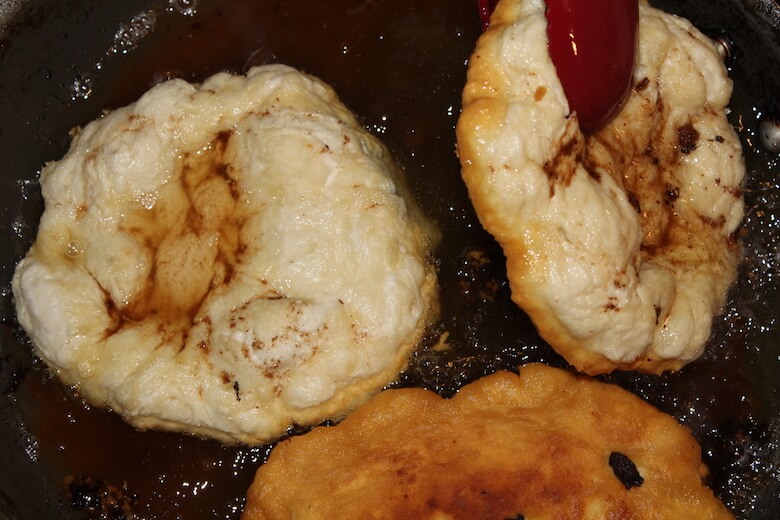 “When you’re explaining it to someone who doesn’t know, you say its like funnel cake,” says Mike Cause, of Mike’s Fry Bread, who immediately explains that they are very different, as funnel cake has a sweeter dough. As he says, “fry bread is more about the filling.”

Mike’s Fry Bread featured a few new varieties this year, including a steak-and-cheese version that Cause dreamt up. In addition to the classic style, they have a taco fry bread as well as a delicious turkey-filled one, that I was lucky enough to sample. He and his wife have also been experimenting with sweeter versions, featuring pineapple and blueberry, which they hope to debut next year.

After growing up at the stand, helping out since he was seven, Cause appreciates running the operation with his own children and wife. His dad, who first started the business 31 years ago, now watches the grandkids for him, as Cause flips dough, waving hi to friends and family who stop by the stand to see the new generation take over.

The first year with the stand completely under his helm was different, as Cause manned the fryer all day. Usually, he says he has some time to walk around. This year, he “was at the stand just looking at the fry bread.” 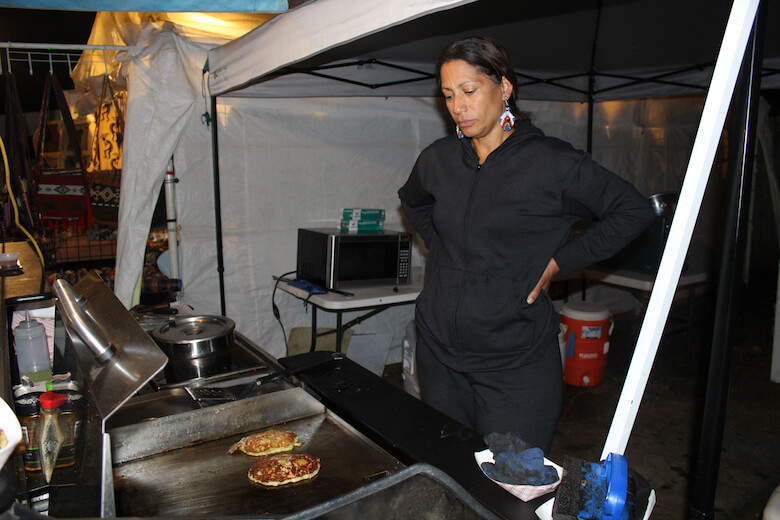 Corn features prominently as you walk around the stands, as well as sea foods like a delicious blue fish hash from Wamp on Wheels.For most of vendors, the weekend is a once-a-year opportunity to jump into the kitchen, reliving childhood memories of the foods and customs at the Labor Day Pow Wow.  Mr. Cause spends the rest of the year as an arborist.

“She saves lives, she’s an OR nurse,” says Marie Stone, of one of her business partners, and cousins, Tanya Rezendes. Along with their other cousin Adeline Whatley, the three ladies behind Wamp Wheels started their business two years ago, focusing on Pow Wows on the East Coast. They hope to expand into the west, but are waiting until “baby wamp grows a little,” says Stone.

Hailing from the Mashpee Wampanoags on Cape Cod, Wamp Wheels specializes in seafood, or “what’s native in our waters,” says Stone.

At their stand, I order a plate of blue fish hash. Growing up, I would eat fresh blue fish that my dad had caught that day, but I’m wary of eating it in restaurants. The dark and light meat can have a strong flavor if it’s not prepared and cooked properly.

However, as I took my first bite into the perfectly seasoned mixture of flaky fish and potatoes, I knew I had come to the right place. The hash was amazing, playing to the specific, innate flavor of the fish while not overpowering the palate. 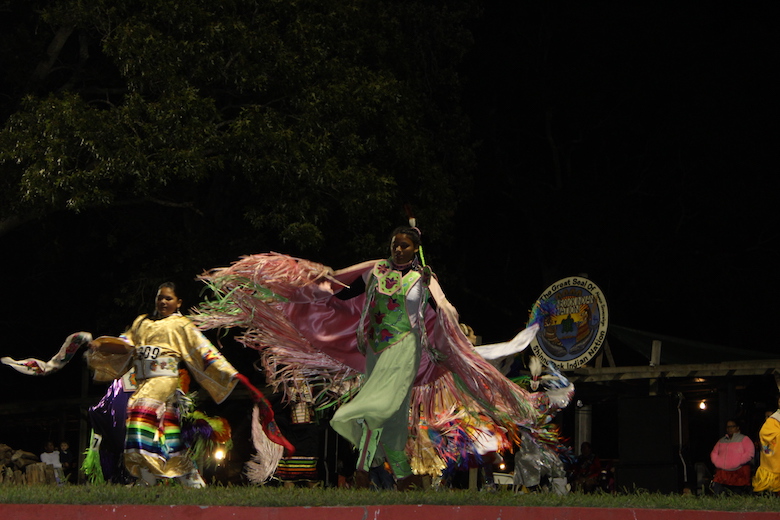 Traditional performances steal the show at the Shinnecock’s annual Pow Wow—both on stage and at the stove.

Smith says that they often encounter wary customers who’ve never eaten blues. But after offering them a taste, she says they always buy the whole plate.

Half-way through the weekend, the trio has prepared over 75 pounds of blue fish. When they are closer to home, sourcing fresh ingredients is not a problem, since as Stone says, “all our guys go fishing.” Luckily, they tell me, at this particular Pow Wow, they can just ask some of the Shinnecock to catch them some fresh blues.

Spend a few hours wandering next year’s Pow Wow, and you’ll sure be “full as a tick,” as one attendee remarked to me as she threw out a charred corn cob.