Of Fruit Cakes, Suet Puddings and Cream Fondants: Memories of Christmas on the East End

Learning about our ancestors through the feasts of holidays past. 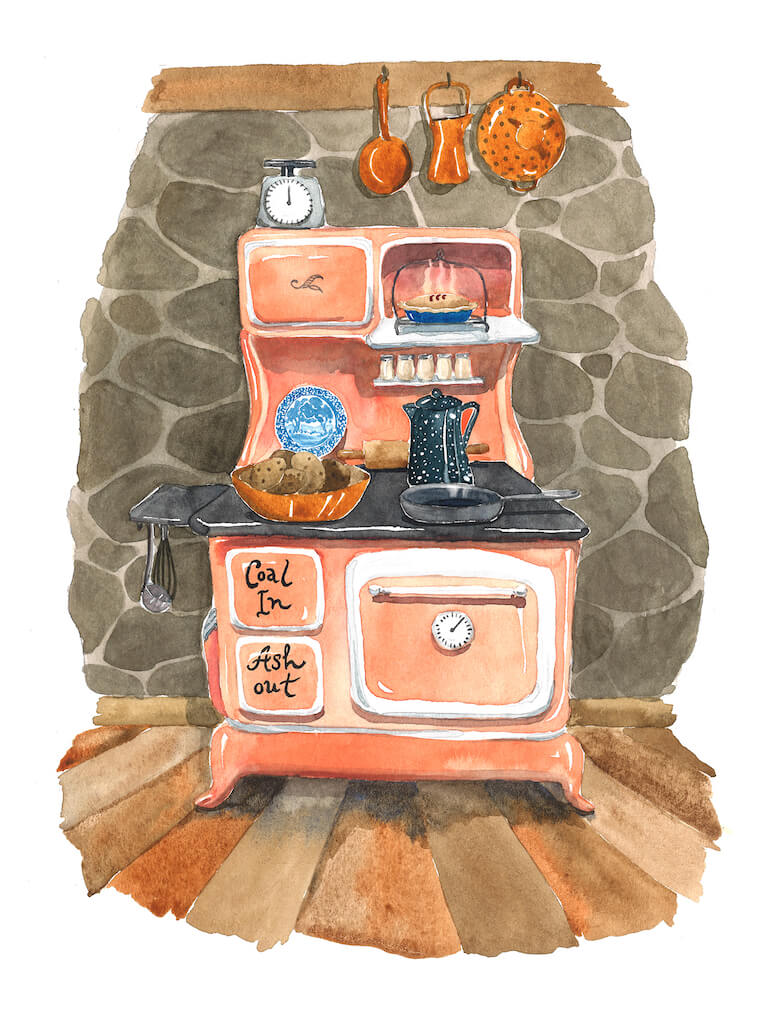 As the days grow colder and families gather for the holidays, memories of simpler times often come to mind. Sharing those memories can reveal glimpses of a rich past and traditions now lost. Luckily many residents have retained for us their historic memories of Christmas on the East End.

In a 1993 article written for the Peconic Bay Shopper titled “Memories of Christmas on Depot Lane,” Cutchogue resident Jean Baker (1917–1999), recounted her holiday memories while growing up in the early 1900s.

“A large coal-burning range in the kitchen and two coal-burning stoves heated the rooms,” Baker wrote. “Kerosene lamps and candles gave a friendly glow, and on cold winter nights we heated bricks in the big range oven to wrap in towels and place in our feather beds.”

Baker also described why the kitchen was the center of the universe when preparing for Christmas.

“Nuts and fruits were chopped as the baking days began,” she wrote. “The fruitcake was wrapped in cloth and ‘aged’ until Christmas. One day was set aside to make Christmas cut-out cookies—cutting the cookie dough into various animal shapes, as well as angels and stars. There were dozens of cookies, crullers and delicious candies like a cream fondant with half a walnut on top.”

Fondant was one of the building blocks of candy making. It was a cream that could be rolled, shaped and flavored to become the base for many cream candies.

Most candies were made by hand in the early 20th century, as few stores offered premade foods. Except in big cities, where department stores like Frederick Loeser & Co., which sold luxuries like prefabricated candies. Baker described how they adorned the family Christmas tree.

“Garlands of cranberry roping and carefully strung popcorn encircled the tree. There were cornucopias filled with candy, gilt-trimmed ornaments, cookies and, of course, the cherished candies Grandma Spooner had brought from Frederick Loeser’s store in Brooklyn—red-and-white-striped candy canes and baskets, bright-red marzipan cherries and apples and strings of rock candy.” 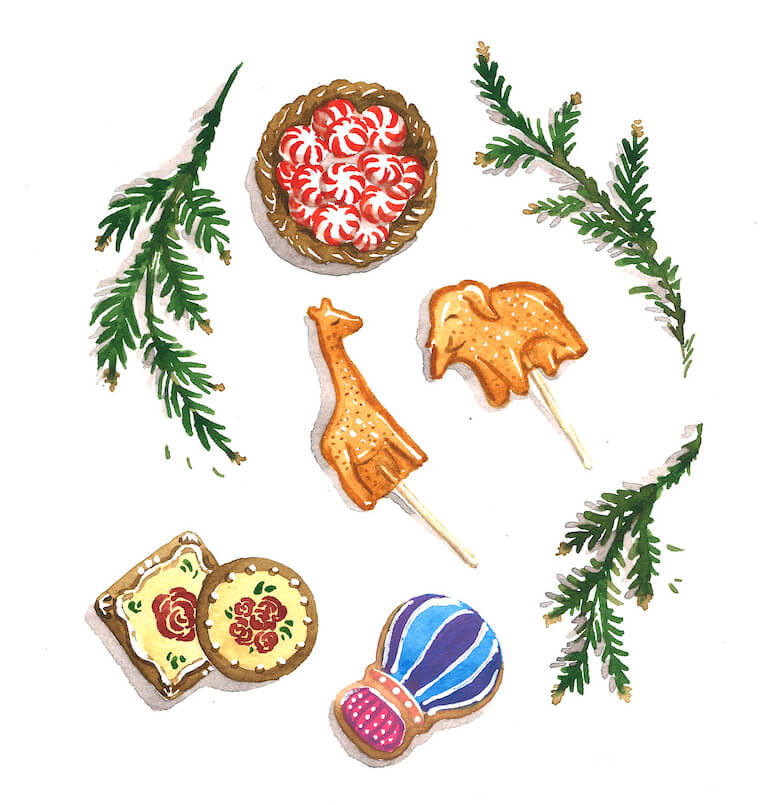 Peconic resident Becky Vail Terry (1918–2010) also wrote about life on the North Fork for the Peconic Bay Shopper. Her articles were compiled in a book called North Fork Nostalgia, that is available at the Southold Historical Society. Her neighbors’ memories of Christmas tell of a simpler time when food, friends and family dominated life.

Terry also relates how the Tuthill family, one of Southold’s oldest families, celebrated at the turn of the century.

“Harold Tuthill remembers cutting a cedar tree from the family farm and trimming it with handmade paper ornaments and strings of popcorn. A sumptuous Christmas dinner was served at noon to many Tuthill relatives, who came by horse and carriage. Turkey, pies and plum pudding were enjoyed, and later there was a taffy pull.”

Christmas on the South Fork 100 years ago was also a special time as described by Prudence Talmage Carabine.

Descended from the Talmages, an old East Hampton family, Carabine is also chair of the board of directors for East Hampton’s Historical Farm Museum, where visitors can experience local farm life from the 1800s to 1930s.

“We try to interpret here the society that was East Hampton in 1900,” she says.

Carabine describes two distinct groups of residents that lived in East Hampton at the time: “Upstreet” and “Bonackers.”

According to Carabine, Upstreet families were wealthier, many were from the city and owned big homes. Those who lived on the other side of the railroad bridge were poorer, many were “Bonackers,” a name referring to working-class families in the Springs section of East Hampton.

According to Wikipedia, the term “Bonacker” comes from nearby Accabonac Harbor, which in turn derives its name from the Montaukett/Algonquian word for “root place.” 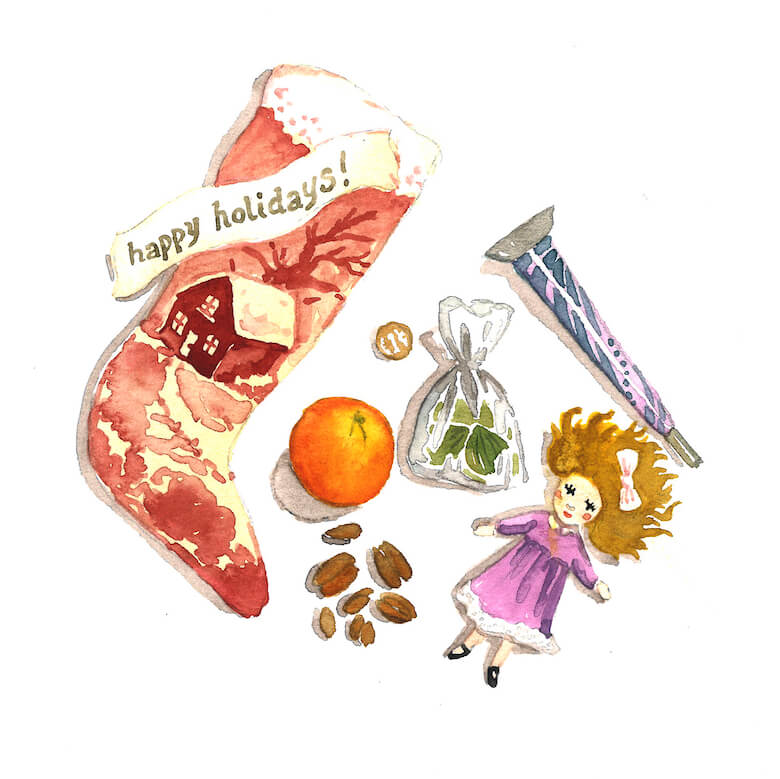 Suet pudding was another holiday tradition. The pudding was boiled or steamed with beef or mutton fat, flour, bread crumbs, raisins and spices.

“An Upstreet Victorian family Christmas dinner would have had many different courses; seafood, possibly venison, duck or turkey,” Carabine says. “Restaurants like Delmonico’s were in existence in the 1880s. Even caviar would have been available as there may have been electricity in those homes by the 1890s.”

The Bonacker Christmas menu would have included anything that could be caught or fished—wild turkey and deer were more than plentiful. Fishermen would have brought back fish, scallops, clams and even lobsters, which were plentiful on the East End back then.

Samp, a cornmeal type of porridge, would have been part of the meal, as was clam pie. Other side dishes would have included bread, root vegetables and creamed onions.

Suet pudding was another holiday tradition. The pudding was boiled or steamed with beef or mutton fat, flour, bread crumbs, raisins and spices.

“Suet puddings were made with molasses from the Caribbean, as that was more accessible and cheaper than sugar,” Carabine explains. “That’s why everybody had beehives, because the everyday sweetener was honey.”

For dessert, locals would have eaten an assortment of pies like beach plum, cranberry and apple made from fruits stored in cold cellars until Christmas.