In Cutchogue, Wickham’s Fruit Farm Elevates the Art of Cidermaking 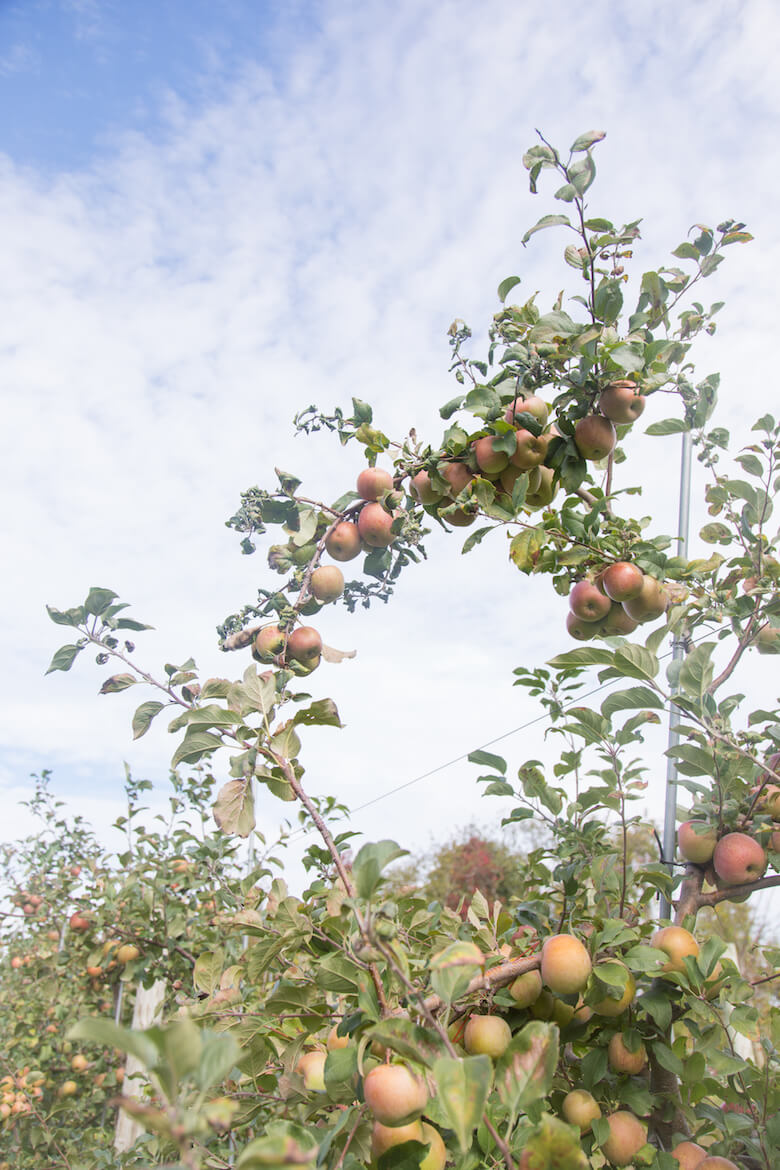 The scent of cider conjures up an East End tradition.

When I crossed the threshold of the century-old barn, I stepped into a fragrant past, with sweet, rosy notes of crushed apple in the air. The hulking, two-story 120-year-old cider press at Wickham’s Fruit Farm in Cutchogue noisily turned bushels of apples into juice, its cypress rails creaking, wheels turning against ancient cogs, and a wooden conveyor belt delivering fruit to the grinder. My hair smelled like a Honeycrisp for the rest of the day.

It’s a scent that conjures up an East End tradition. Take a bushel of apples that are too ugly to eat out of hand, squeeze out the juice, put it in a jug, and you’ve got cider. Enjoy it now, or if you prefer hard cider, wait a week. 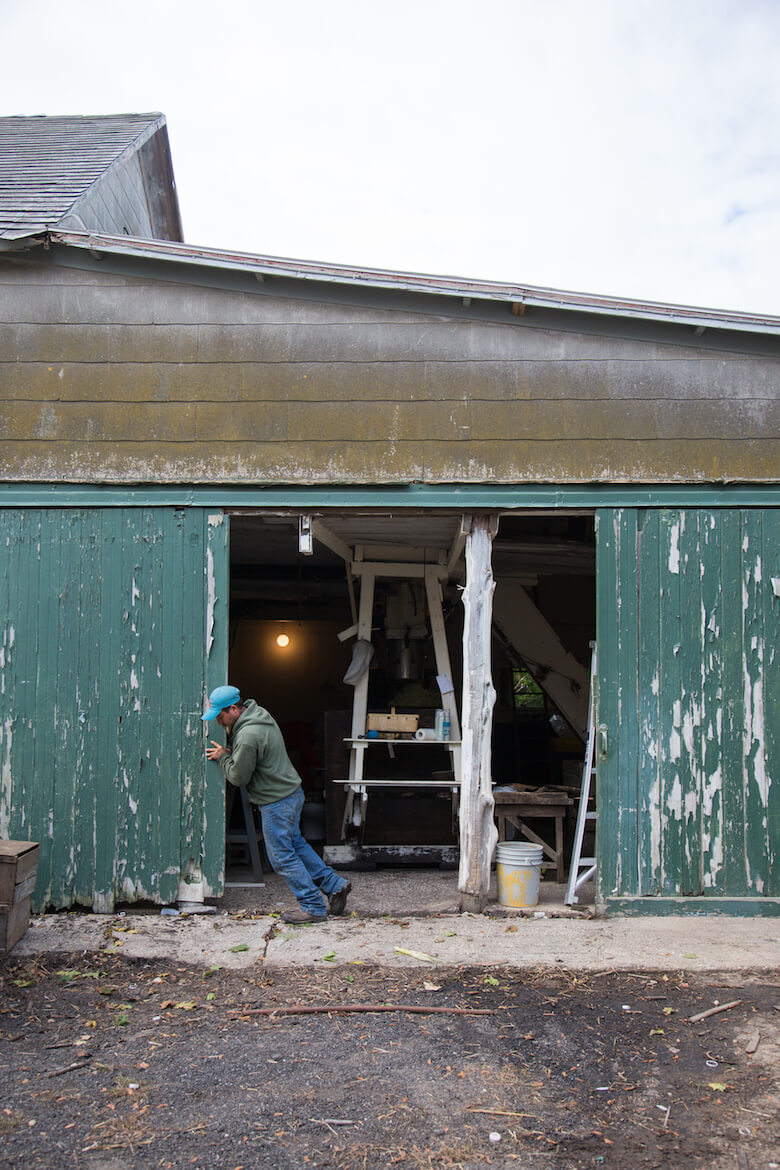 The Wickham’s farm in Cutchogue has been in cultivation for over 300 years.

The first European settler on Shelter Island, Nathanael Sylvester, had apple trees, a cider mill and cider press on his plantation, and his son Giles continued the practice of making cider and cider-water, a less expensive and less alcoholic beverage made from rehydrating and mashing the first pressing of apples. A Native American plantation worker called Harry made the cider that was sold for cash, or bartered for goods and labor with the Manhansets.

The Wickham’s farm in Cutchogue has been in cultivation for over 300 years, and the family began growing apples and making cider after World War II. Tom Wickham speaks from a half-century of cidermaking experience, “The most important thing is the mix of apples. You want some that are sweet and some that are tart and stand up to the flavor. It’s that balance that all of us look for.” 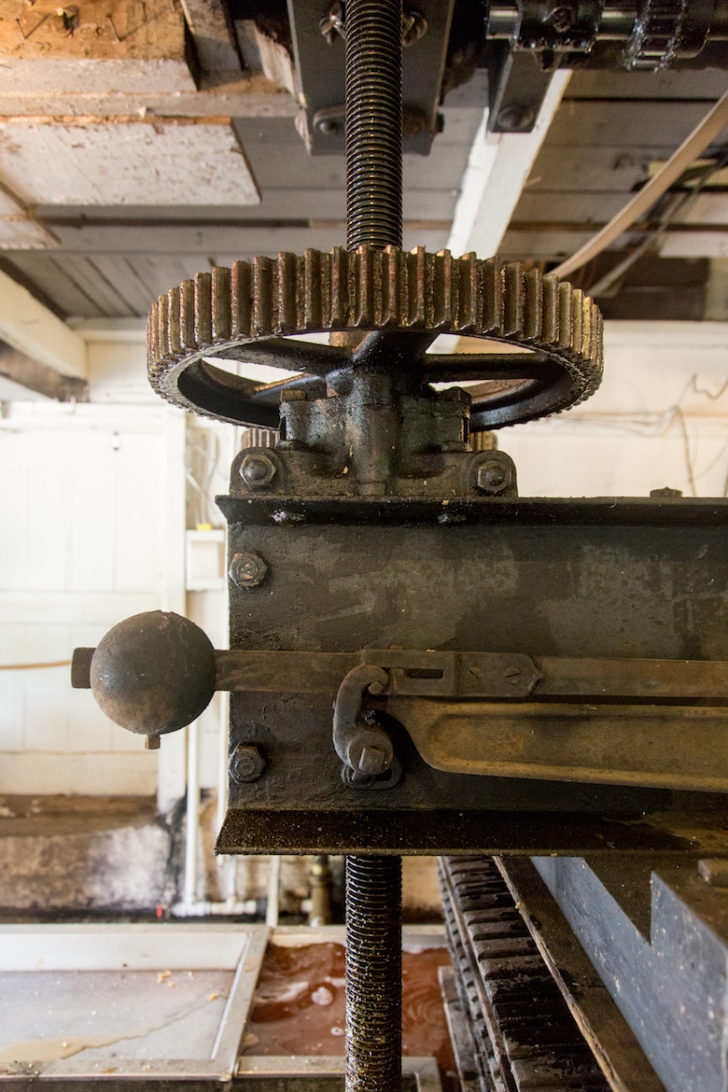 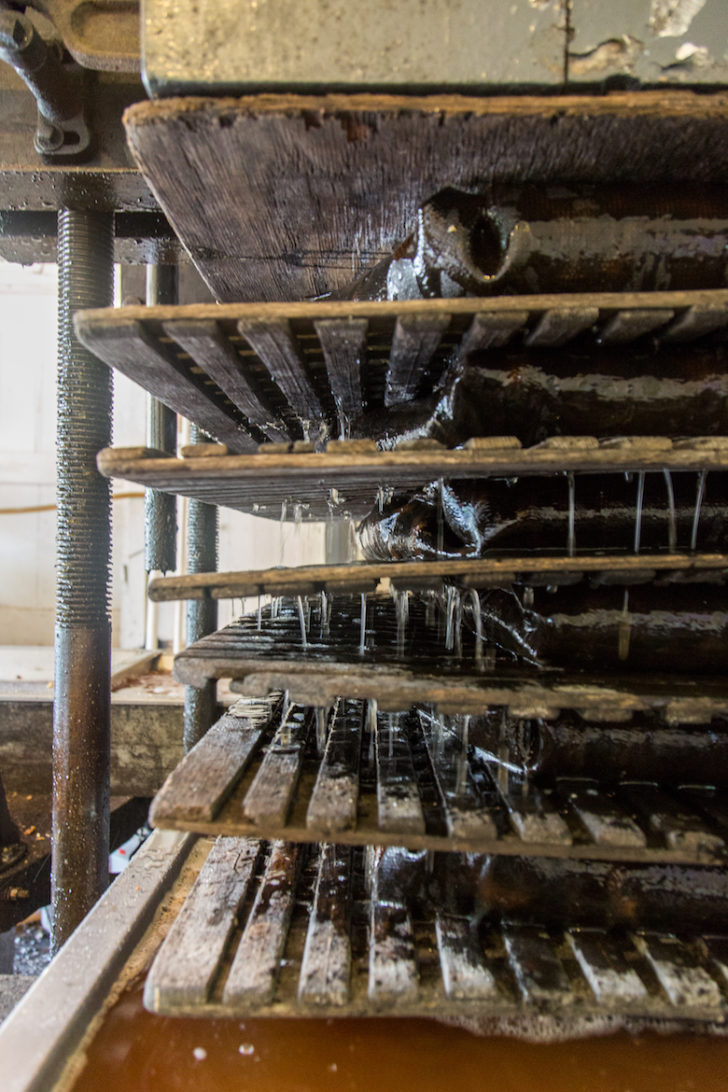 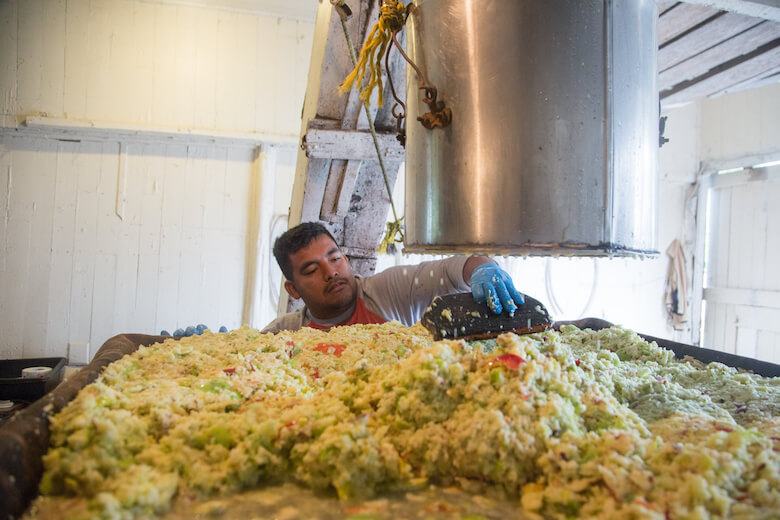 At Briermere Farms, Clark McCombe blends varieties of his farm’s apples using a modern press. His family has been making cider since the early ’60s, but they stopped using a wooden press in the ’80s, he said, because although it gave a pleasant flavor to the cider, it’s hard to sterilize a wood press. Like most East End cidermakers, McCombe uses an ultraviolet sterilizing system, because the other option is pasteurization, which requires heating the juice and losing flavor.

Before refrigeration, most cider was hard cider, and the amount of alcohol depended on how sweet the apples were. Today sweet cider is the beverage of choice for apple-picking school groups, and artisanal cidermakers like Woodside Orchards are creating a Champagne-quality beverage, with 6.8 percent alcohol; dry and elegant. 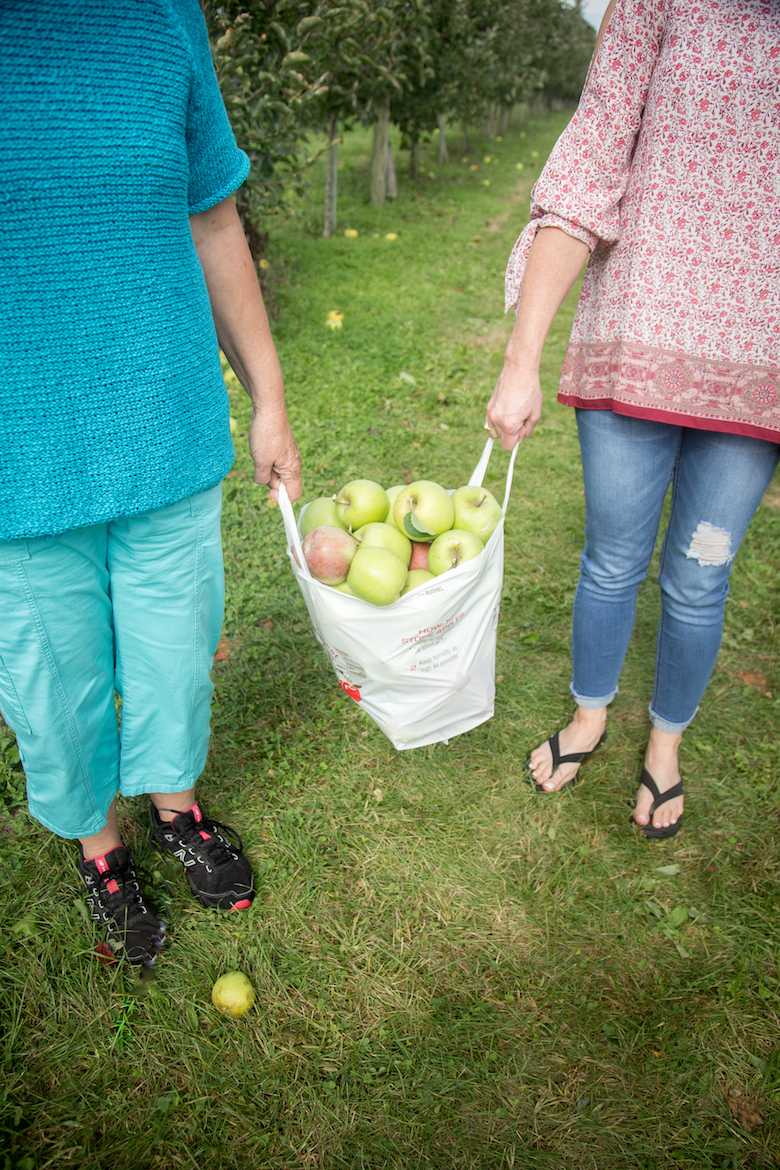 Cider on the East End was once so common there was hardly a landowner without an apple tree.

Six years ago, Bob Gammon got the idea to make hard cider at Woodside Orchards, the Jamesport apple orchard established by his father and brother 30 years ago. Bob Gammon Sr. planted the 40-acre orchard in the ’80s and sold apples out of a jury-rigged irrigation trailer until the local raccoons got wind of it. He moved a cabin from a defunct children’s camp on Laurel Lake to his Manor Road orchard, replaced the trailer with the repurposed cabin and has sold apples and cider from it ever since.

Bob Gammon enlisted the aid of a local winemaker, a University of California, Davis-trained scientist who took him on as an apprentice. She showed him how to apply the same tools she used to ferment grapes on apples; manipulating sugar, alcohol levels and pH to make fine cider.

An enthusiastic beginner, while Gammon was waiting for the license to sell his hard cider, he fermented 15 batches at the same time, intuitively blending various combinations of apples and yeast, and invited friends over for a tasting party. 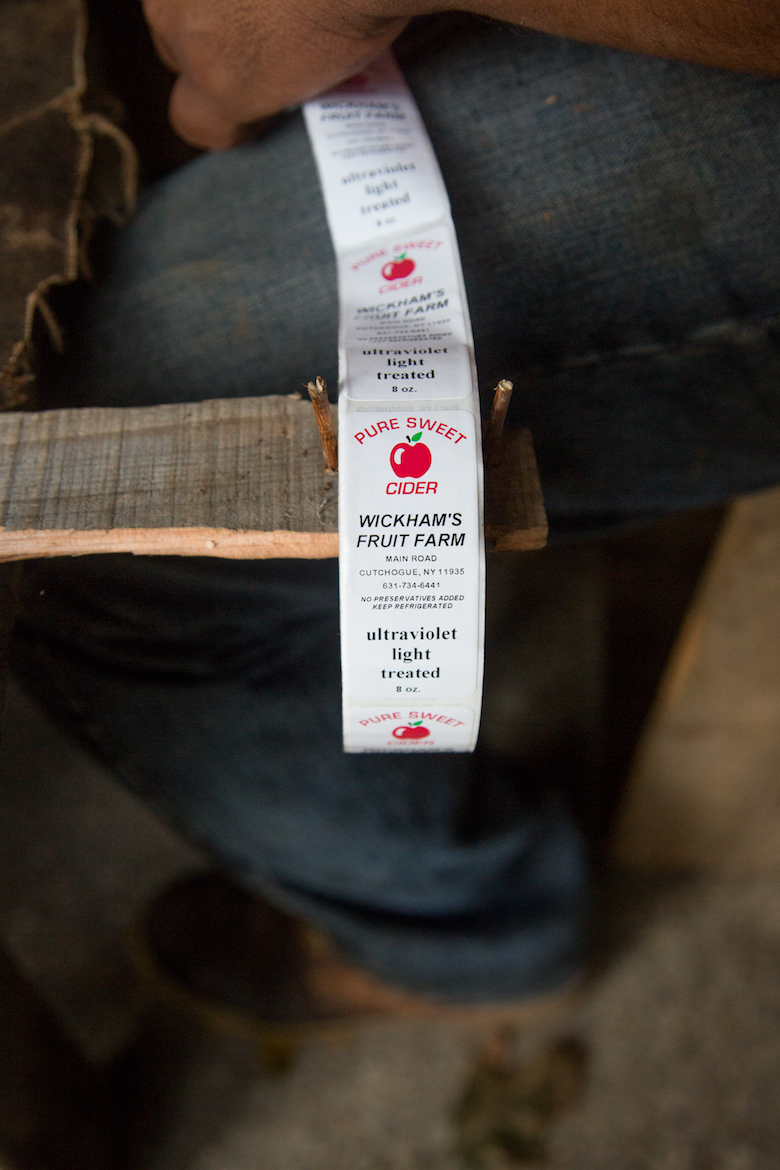 Letters between William Adams and Thomas Dering of Shelter Island in 1768 show that both men understood the necessity of tasting a barrel of cider before buying it, to make sure it was good.

It did not go well. “One had an aroma of roses but tasted so bad you had to spit it out. Another smelled like a swamp, but on the palate, it was great,” Gammon said. “We had 15 barrels of junk.”

It was a stark lesson in the way apples and yeast generate a wild variety of flavors, not all of which you want to drink.

Cider on the East End was once so common there was hardly a landowner without an apple tree, and the scabby, pock-marked fruit they bore in the days before pesticides were good for cider. Fermented and stored in barrels, it lasted through the winter. Letters between William Adams and Thomas Dering of Shelter Island in 1768 show that both men understood the necessity of tasting a barrel of cider before buying it, to make sure it was good.

That is one way in which cidermaking today is different than cidermaking 300 years ago. No longer an intuitive process, making hard cider now involves applying the principles of winemaking science to create a Champagne-like beverage refined enough for a holiday dinner.