Peconic Bay Scallops are Back. Here’s How East End Chefs are Preparing Them

Last year’s harvest is history. This year’s, worthy of celebration. 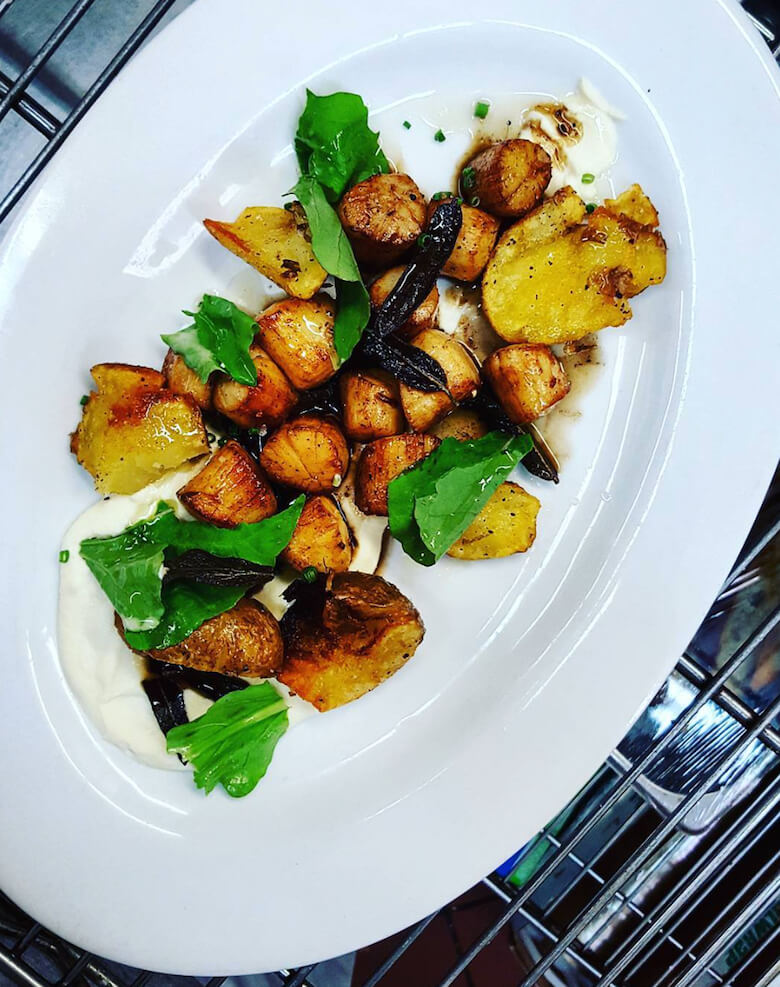 “Butter… lots of … butter.” That’s how Almond’s chef Jeremy Blutstein describes his first plated Peconic Bay scallop dish of the season. Along with the rest of the East Coast, Blutstein is now embracing the highly anticipated—and most seasonal of seasonal—tiny scallops, which arrive each November and last until around March. Like turkey and Beaujolais, bay scallops signal the unofficial-official start of the holiday season. Thumbnail-sized and candy-sweet, they are a decadent coda to the season’s harvest.

An early haul of Peconic Bay scallops, which are found in shallower waters than their “diver” cousins, speaks to a memorable 2017 season. In 2016, the season was notably short and drab, with skyrocketing prices and limited supply. Many restaurants forsook them altogether. This year, gleefully, the tides appear to have changed, and local fishmongers and restaurants on the East End are already selling and serving these delicacies up. Prices are comparatively reasonable (local markets are reporting $16 to $17 per pound, with wholesale prices far below that), owing to what looks like a bountiful year. Because of the season’s apparent abundance, restaurant prices are way down, too. Dishes that would have fetched $26 last season are selling for just under $20 now.

And so: it’s time to get your fall delicacy on. In addition to butter, Jeremy Blutstein will be serving the first of this season’s scallops with Marilee Foster’s pinto potatoes (twice-cooked), accompanied by a saffron aioli and a sage brown butter, a play on the popular Spanish Tapas dish papas bravas. Blutstein sources his Peconic Bays from the Cutchogue-based powerhouse Braun Seafood, as well as from Montauk Shellfish Company.

At East Hampton’s Highway Restaurant, chef Justin Finney is preparing his bay candies ceviche-style, with roasted Fresno peppers, lime, cilantro, scallion, and avocado. Scallops will arrive served in the shells. He is also running a tempura special, lightly frying the scallops and pairing them with a yuzu spicy mayonnaise. He urged me to come in before service, child in tow, to sample the first gems of the season, a gift no reasonable person would turn down.

On the first truly chilly Friday in autumn, I pulled up to the best booth in the house and treated myself to what will only be the first of many samplings of what this year’s sea has to offer. Finney’s shell-in scallops get texture from sea-green pepita seeds. Moonstone translucent, the scallops practically float in a sea of leche de tigre, a Peruvian citrus-based marinade used to cure ceviche. As far as this year’s harvest is concerned, Finney was unambiguous. “They’re the size of quarters,” he said. He’ll be changing the scallop menu regularly, featuring such specials as bay scallop tacos. Better make that reservation right now.

Sag Harbor’s other temple of seafood, Dockside Bar and Grill, also has bay scallops on the menu this week, serving them sautéed with a carrot-parsnip puree and spinach, a dish described to me by a fellow scallop obsessive as a “good balance, so you get to taste the sweetness.” The scallops are, it is agreed, larger than usual this year, perhaps another harbinger of a good yield.

Peconic Bay Scallops at PAWPAW tonight! Because if we didn’t the guests would revolt! 😬

Most of the local restaurants featuring bay scallops will be changing their sets periodically in the coming weeks. It’s worth stopping in to see what’s new while the season is in full swing. You don’t necessarily need to dine out to dine well on Peconic Bay scallops, of course. Another friend of mine—self-described as a “former East End waiter”—professed his love for the little guys with his culinary home cooking plan: sear scallops in foie gras fat; stuff them into a roasted acorn squash; garnish with shaved raw fennel.

To which I say: Bon appétit.