“These are just fun to drink,” winemaker Dean Babiar said. 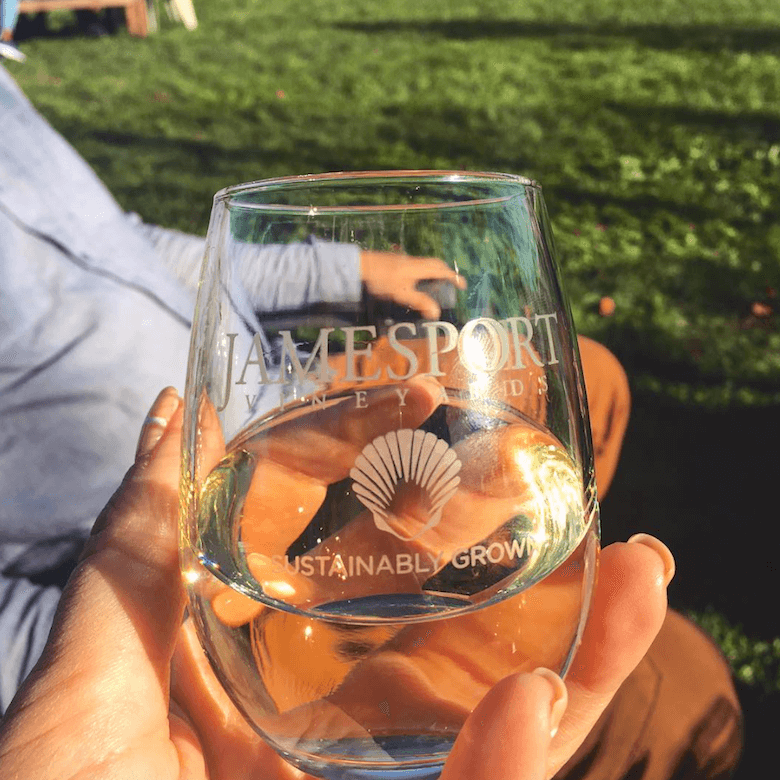 If you’re looking to drink local while avoiding alcohol, your options can be limited to apple cider, water, and herbal teas. Jamesport Vineyards is one the few local wineries to produce a verjus. French for “green juice,” verjus is the juice from unripened grapes, the ones thinned by winemakers as the crop is beginning to ripen.  They sell it to restaurants in bulk for salad dressings and sauces, as well as by the bottle in their tasting room.

Jamesport Vineyards’ verjus is made from riesling. It’s only made in years when the crop is large, and there is plenty to thin. The juice is pressed right away, before the bulk of the harvest starts, then it’s filtered and kept refrigerated before bottling. Once bottled, it lasts a few years, and then once opened, a few months in your fridge. It’s great as a mixer with vodka or with sparkling wine. Jamesport averages about 110 cases each production, and they usually sell out by fall when the next batch is ready for sale.

Owner Ron Goerler is always looking to maximize yield from his vines and use his crops in new and innovative ways, while staying steeped in the traditions of old world wine-making. Winemaker Dean Babiar recently released a line of pet-nat wines. Short for pétillant-naturel, this style of fermentation produces a soft bubbly, cloudy wine that’s lower in alcohol content than most.

“These are just fun to drink. The bubbles are pure with this sort of farmhouse feel. They are made without sulfur and lean on the natural side of the fence,” Babiar explained.

For now, Jamesport Vineyards is producing a cabernet franc, albarino, and syrah. Pet-nats are left on the lees (the yeast), and allowed to go through their secondary fermentation in the bottle, then capped with a crown, like a beer or farmhouse cider, instead of the cork and cage of Champagne style wines.

The decision to ferment in the pet-nat style was partially determined by the grapes and the year.  The varieties the winery chose sometimes struggle to ripen, and the not so ripe fruit is well suited to this quicker process which results in a lighter style wine. The cabernet franc and syrah look and taste like sparkling roses, while the albarino is a slightly sour, foamy, yet very refreshing white, sort of reminiscent of a vinho verde. They are released to wine club members first, and then will be available in the tasting room and for wider distribution.

Going forward, Jamesport Vineyards plans to continue trying new things. They’ll be taking over Southold Farm + Cellar’s vines, which encompass 13 different varieties, including some like Teroldego, which are new to the region. Babiar recently traveled to Italy, where the variety is more common, to taste the regional wine and get inspired for making his own. “I spent the time tasting hundreds of different teraldegos, lagriens and goldmuskatellers from Trentino-Alto-Adige. I’m interested in the brighter style,” he said. He’s excited to keep the Southold Farm + Cellar vision alive. “I loved what Reagan was doing over there, we share similar philosophies. I remember listing off varieties grown out on the North Fork to winemakers in Italy, and their eyes always lit up when I mentioned some guy decided to plant these varieties. I’ll keep pushing this way of thinking,” he said.

Started in 1985, Jamesport Vineyards was the 5th winery in the region. Originally started in 1981 by Goerler’s father in Cutchogue, where some of their vines still grow, he named the vineyard after the hamlet when he acquired the land in Jamesport, in the tradition of old world vineyards known by their location. As it becomes time to replant some of their vines, they are looking to the future and thinking about what makes sense.

“We might do new things,” Goerler said, “and not plant more syrah.”