A diverse cast of characters is producing some of the East End’s most diverse and delicious food at Kon Tiki. 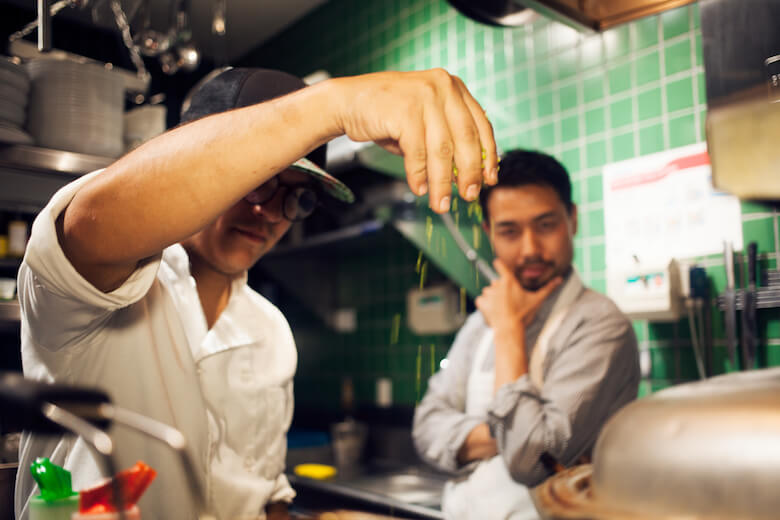 “You have to taste what you’re doing. Always.”

Just as I dismount my bicycle, Johnathon Lee greets me on the sidewalk with a Thai Bird Chili plant, mambo music wafting into the street. He shows it to me, lovingly, as he speaks about the vibrancy in its yellow and red peppers and their exceptionally hot taste. You see the thai chili in many of the small dishes served at Kon Tiki: As a flavorful garnish on their phenomenal dumplings, an accent in their spring roll, or even as an accompaniment on their beautiful Tiger Eye oysters from Greenport Oyster Company. And in true fashion, just like the chili plant Johnny carefully looks out for, Kon Tiki is quickly becoming the hottest place in town.

Kon Tiki is the new restaurant inside The Gallery Hotel, a boutique hotel and contemporary gallery on Greenport’s Main Street, slated to become a permanent fixture in the unique establishment. The hotel is known for being avant-garde and forward thinking; imagine an accelerating incubation platform for artists and hospitality in Greenport. They previously hosted Lucky Bee NYC for a pop up last season that literally left the village buzzing with excitement. However, this season the gallery sought a different route. 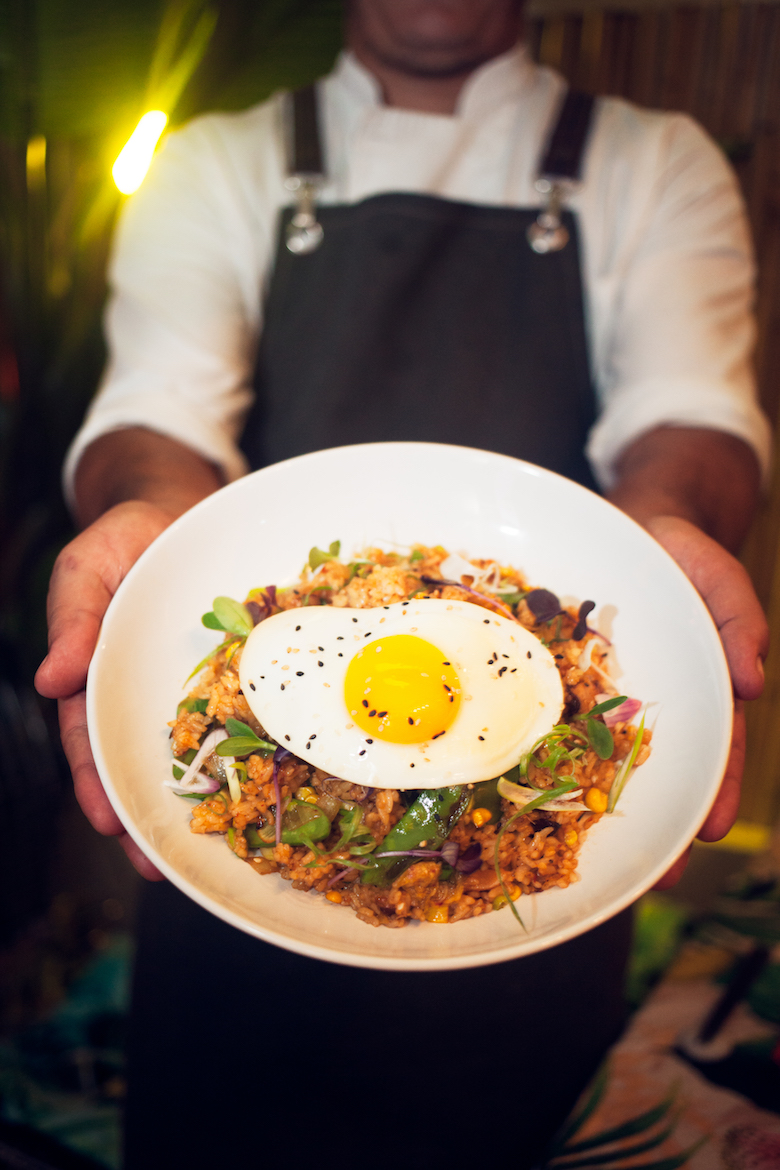 The seeds of Kon Tiki were laid throughout several fortuitous moments over the course of the last three years over strenuous work days on the South Fork, crazy nights, and many jaunts between the city and the beach. But it seems that Luis Cabrera was the bridge. Aside from being a creative director from Ecuador and an amazing host, “he’s an artist,” says Johnny. He was the thread the tied everyone in. Luis and Johnny worked together at Moby’s in East Hampton, and through a friend of a friend and a fortuitous pit stop in Greenport, Johnny was introduced to Carolyn Rusin, owner of The Gallery Hotel. Having given Johnny the whole tour, he recollects: “I see the kitchen and I thought, ‘Wow, that’s really a beautiful kitchen. There’s something to this,’” all the while hoping to open a restaurant one day. A year later he starts bartending at Lucky Bee NYC and in a short while becomes the general manager. Soon enough, the Carolyn Rusin stops in to dine at Lucky Bee NYC, and from there the rest is history.

“I’ve been working in restaurants for so long, and most of them in New York… for great chefs and even great restaurateurs like Danny Meyer who sets the standard when it comes to service and in terms of food and restaurant culture in New York—and maybe even America. But like, as I’m working at these places where everything is so divided in terms of front of house, back of the house, top of the house, it’s like… when you draw those lines, you’re separating yourself from the person that you work with for ten, twelve, fourteen hours a day. That separation really, I think, destroys enjoyment in your work environment.” 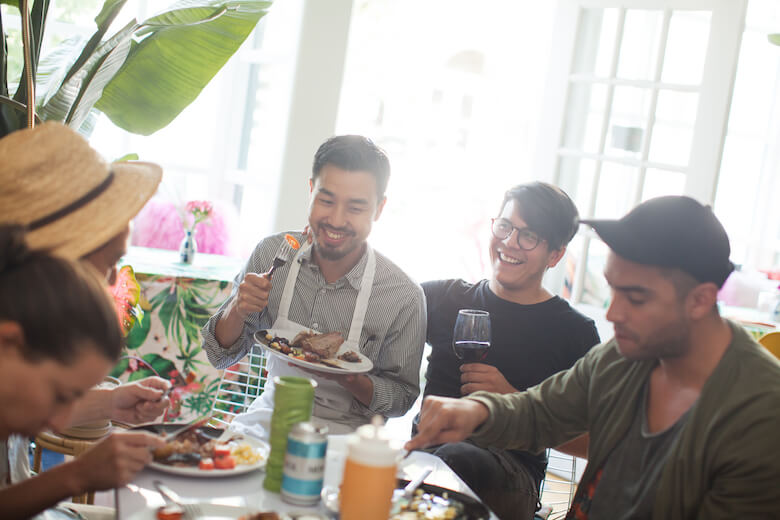 Johnathon Lee is the food and beverage director at Kon Tiki, a name that truly highlights the multiculturalism that exists between the front of the house as well as the back of the house. Johnny himself is an American Korean who grew up in Wisconsin. Their star bartender, Alfie Ong, grew up in Queens from a Philipino family. Luis, the “artist,” is from Ecuador and Alejandro, the hotel general manager, is from Colombia. In the kitchen you have two chefs of equal standard and weight: head chef Jose “Cheo” Avila of Venezuela and Hisashi “Ami” Murakami of visiting from Japan. From Pacific to Pacific, this brotherhood encapsulates the impossible 101-day Kon Tiki expedition made by Norwegian explorer, Thor Heyerdahl, on just a raft in 1947 from Peru to the Polynesian islands in order to prove that there was no reason why the indigenous from South American could not have, with the technologies of their time, been the first to colonize the Polynesian islands. Within two days of its conception, Kon Tiki became not only the name of the restaurant; it became their mantra.

There is no question that the enchantment found in Kon Tiki inherently lies in its diversity. You taste it in their food, in their cocktails, and you feel it through the music and the décor. That is why Johnny emphasizes such unity between the front of the house and the back of the house. And with Kon Tiki being in such a small, intimate space to begin with, that is already facilitated. “You can taste [the energy] in the drinks, you can taste it in the food; I used to pull the chair up when I was a kid and watch my mother cook. I’d pull the chair up right next to the stove, and I’d be looking in, and watch. I remember she made this beef soup, which is one of my favorites, and I’d watch the process and I’d be like, ‘Mom, how much did you put in?’ And she’d say, ‘Oh, a little bit of this, a little bit of that.’ Never measurements, of course. And then she would add, ‘But the most important ingredient you have to put is love; otherwise, it doesn’t come out.'” 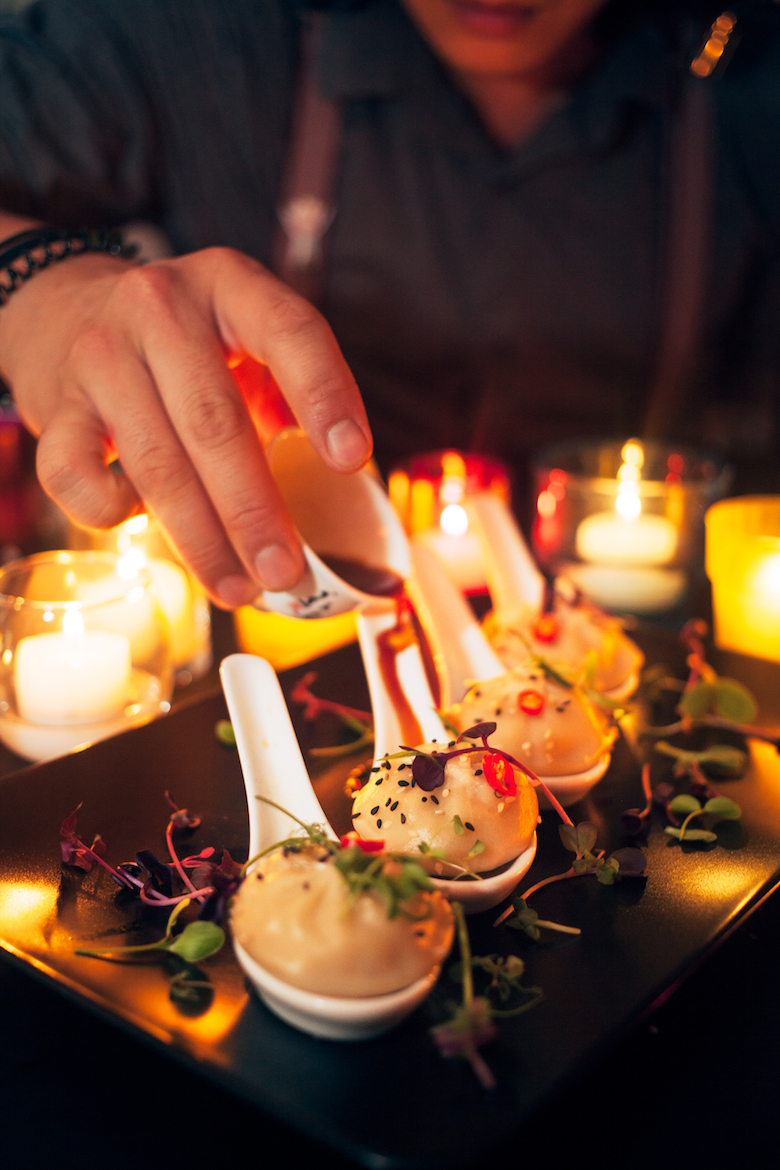 This idea is reinforced throughout the staff; the idea of making dishes as good as their mothers would. As Alfie mentions, guests are taken care of completely, “as if you were a child at the dinner table with your parents and your family. Instead of saying cheers, we say Kon Tiki. I think that’s grasped a lot of people.” And certainly the synchronicity is undeniable.

In the kitchen, Cheo the chef believes the cultural differences and varying skill sets between him and Ami play as strength to their cooking. He elaborates: “Diversity brings different flavors, notions, and different ideas and experiences from where we each come from. From Latin America, I can bring different aspects to the food, to the music, to what I think is hospitality.” 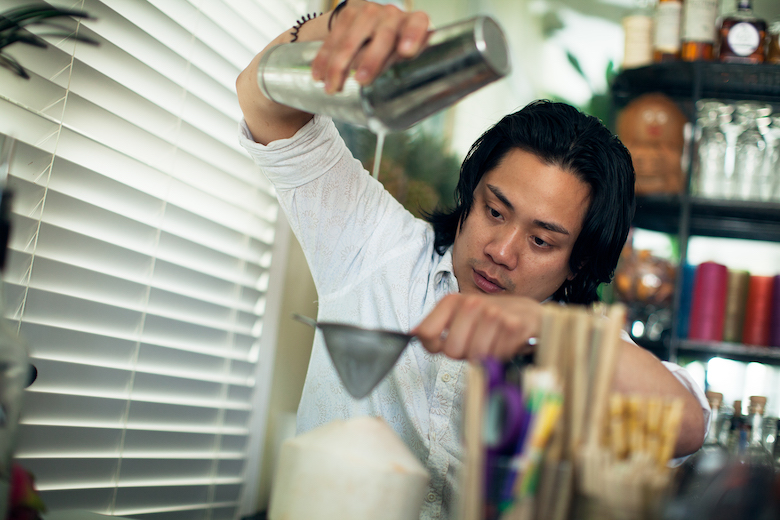 Ami-San may think differently; there are different customs in Japan, but in the end they are embedded in the same idea of making the customer feel welcomed.” For Ami-San, “the food is all the same. French, Italian, and even Asian food and more; it’s all the same. It’s all comfort food. Between an American-Korean, a Venezuelan, a Philipino, Ecuadorian, Colombian, and Japanese man, the most important thing is respect.”

The menu at Kon Tiki is very much an eclectic Asian cuisine, but there are surprises throughout. Take their Grilled Summer Corn for example; it is local organic corn glazed with sake miso sauce cut into quarter inch slices served alongside a spiral of sweet corn hair and a tower of lightly burnt husk for a smoky aroma. Then you have the Carpaccio of Local Fluke seasoned with yuzo kosho and served with micro greens from Koppert Cress farm in Cutchogue. Here you have local ingredients served with an exotic twist. 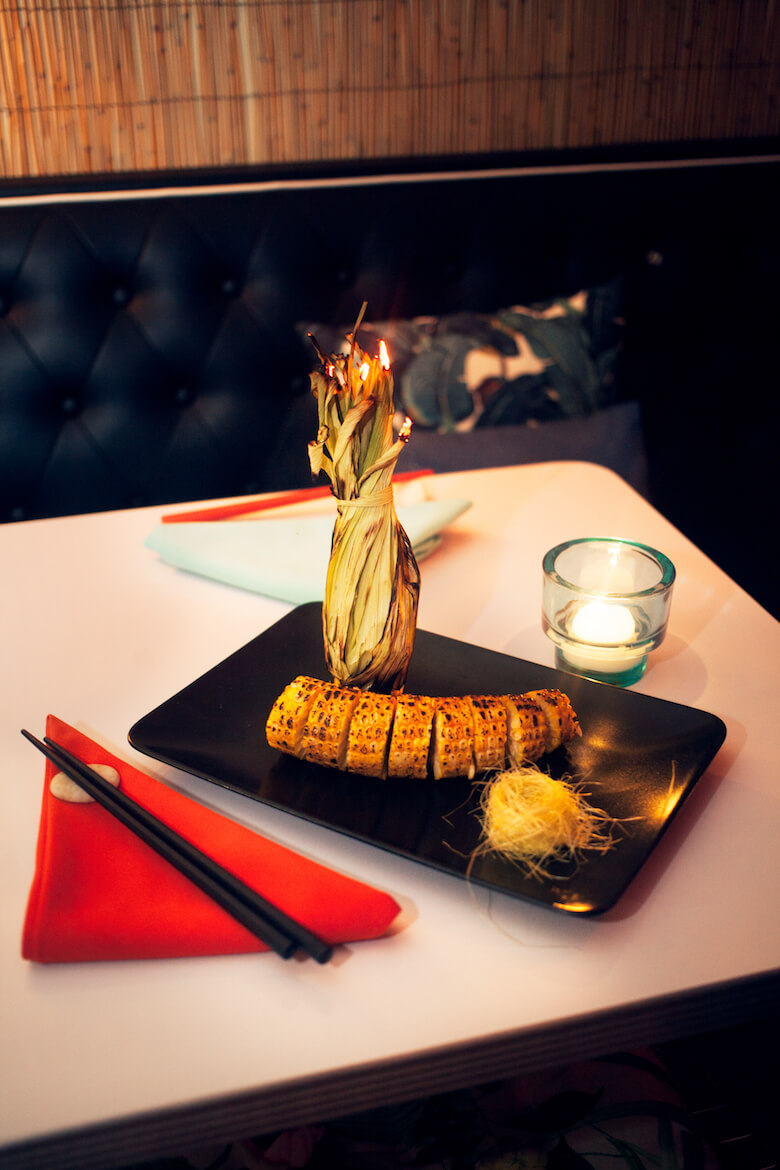 Many who come to Kon Tiki stop in to discover something new, foreign, and unfamiliar, but to the staff Kon Tiki is synonymous with coming home for a home cooked meal. Although Kon Tiki will be closing in mid-November, exciting things are coming from them in the future like a foreseeable second location not too far off from the hotel. As Cheo puts it, “I really feel like I belong to this place at some point, and I feel at home.”

“Throughout all of it, the whole thing about a restaurant is connecting with people whether it’s through the food, through the drink, through the atmosphere, the decor, the music; these are all opportunities to connect with people that you have nothing to do with really. Especially in Greenport.”

Everyone can admit that we are all living through very complex, disorienting and divisive times. But it is a comfort to witness such a beautiful union through a group of people who, despite their disparate backgrounds, have found a thread in their values, their friendship, and their passions that allows them to continually seek common ground amongst one another. So let us all recover from our weary travels, whether by raft, horse, train, or Jitney and through good food, drink, and sincere service finally restore.