For an Authentic Taste of Puerto Rico, Visit Costa Restaurant in Mayagüez

This story was originally written this spring, for consideration for our just-released travel issue. Since then, Puerto Rico has suffered severe devastation at the hands of Hurricane Maria. It is still unclear if the places and people depicted below still actually exist. To help Puerto Rico and its people during this time of crisis, please consider donating to one of the organizations listed here.

Mayagüez is not normally on the tourist circuit when it comes to visiting Puerto Rico. A once-bustling port city on the west coast, it has sagged for years with the decline of agriculture and the exit of the textile factories and tuna-processing plants that used to drive its prosperity.

But Mayagüez, where my maternal family is from and where I have lived on and off over the years, is slowly and steadily building on a few locations—some new and some just spruced up after years of neglect—that make it a terrific place for a short visit from the more touristed surfing towns of Rincón, Aguadilla (where the major regional airport is) and Isabela, just a half hour north and that gives a glimpse of both its former grandeur and small town life on the island. And, when you’re all done seeing the sights, you can join the local aristocracy in watching the sun set spectacularly over the bay over tapas and wine from one of the most exciting restaurants on the west coast.

When my great-grandparents were married in Nuestra Señora del la Candelaria church, now cathedral, on the very day in 1898 when U.S. forces landed on the island to take over from the Spanish, it still had the double golden cupolas that make it one of the loveliest churches on the island. But by the time my mother was baptized there in the 1930s, the 1918 San Fermín earthquake and tsunami and a freaky lightning strike (think Back to the Future) had taken them down. They would not be restored until 2005.

La Catedral is now a graceful anchor to Plaza Colón, where enormous shade trees circle and Las Damas de Colón, a series of statues holding lanterns brought from Barcelona way back when, line either side, where gentlemen in güayaberas play eternal games of dominoes on folding tables near the fountain and on the other end, the wedding cake façade of City Hall—also restored—stands guard. We go there in the evenings for a stroll, stopping first for homemade tropical ice cream at Rex Cream on the northwest corner. Coconut, guanábana (soursop) and mango are among the favorites, but I get corn—yes, corn ice cream—with a dust of cinnamon. Every. Single. Time. 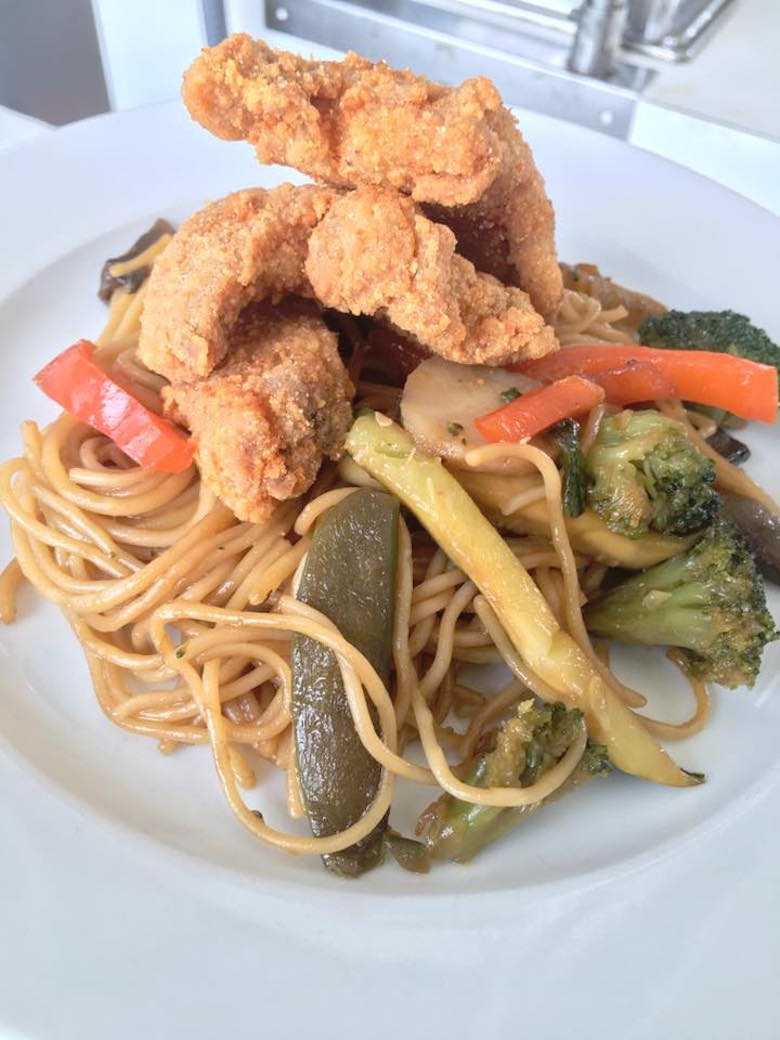 When in Mayagüez, dine at Costa.

Off the main square, there is a fair bit of grunge with the occasional spectacular old building, some in beautifully restored condition and others still waiting for someone to show the love. A new tiny jewel of a (free) museum celebrates the life of cellist Pablo (Pau) Casals who spent his final years of exile in Puerto Rico, founding the Puerto Rico Symphony Orchestra, the Casals Festival and the Conservatory of Music. Casa Museo Pilar Defilló in Mayagüez is his mother’s birthplace and while you really need Spanish to understand the displays, it is a great opportunity to see the architectural details and interior of a fine Spanish colonial home from the 1800s. The tile alone slays me.

A few blocks south is one of my favorite places: la Plaza del Mercado, a market building with permanent kiosks operated by local merchants built in the 1890s from—sources say—a prefab kit from Gustave Eiffel’s company. My great-grandfather and great-uncle had a stand here in the early 1900s where they sold coffee and citrus fruits from the family farm up the hill. My great-uncle Jaime would tell us that in the lean Depression era, the market vendors would trade their goods with each other to feed their families as few customers had money to actually buy.

Today the fruit and vegetable stands are packed with local and imported (mostly from the Dominican Republic), produce: the viandas or root vegetables like yuca, malanga (taro), batata (true yam) which are staples of local cuisine; papaya and in season, the mangoes for which Mayagüez is known throughout the island (small yellow variety, honey sweet and nonfibrous) and quenepas as well as breadfruit, citrus, numerous banana and plantain varietals and occasionally little known species like jobillo (Spondias mombin, a small tree fruit that is yellow and used sometimes to make jam. It tastes a bit like pineapple). You can get a shot of morning coffee and an empanada, smoothies, rice, dried beans and gandules (known as gunga beans or peas, depending on which island you are from), cilantro and recao (sawtooth coriander), homemade pique (hot sauce) and sofrito (Puerto Rican mirepoix), local white cheeses, lottery tickets, rabbit (special order from the butcher), religious candles and statuettes, pots, pans, grecas (stovetop expresso makers). It’s my personal heaven on earth and I wish we had one on Long Island. 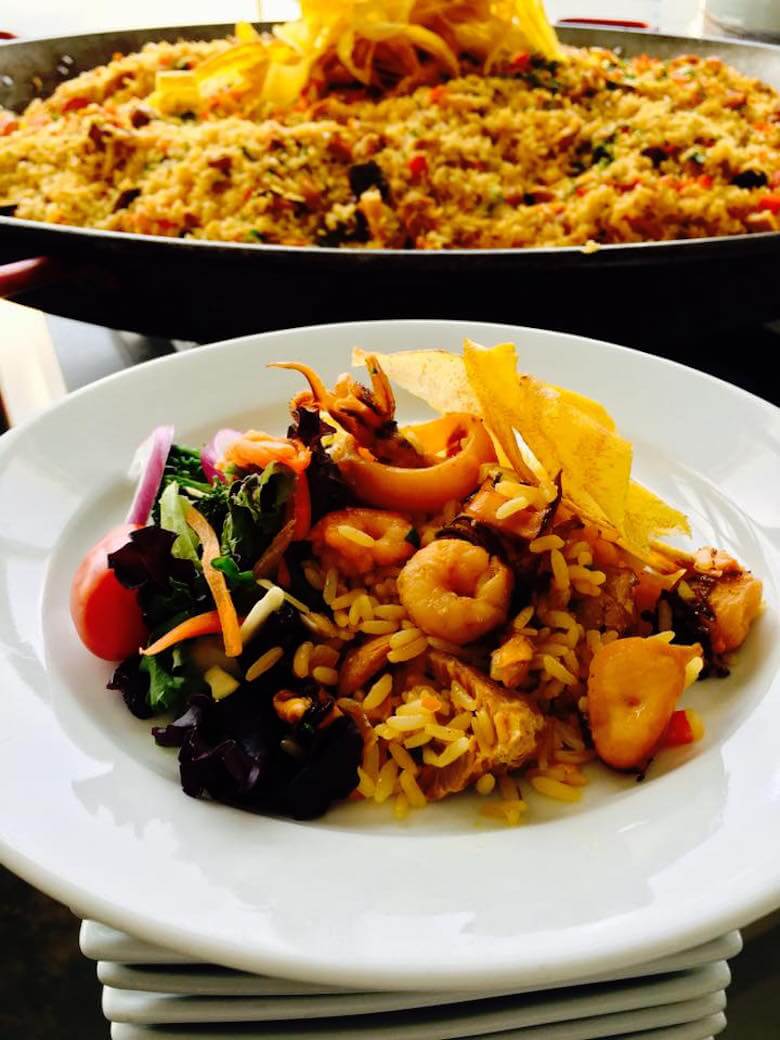 Costa’s owners were running a kiosk and a growing catering business when the restaurant became available in 2011 and they won a bid on the space.

While there are a couple of places we enjoy eating in the town of Mayagüez—Sancho Panza pizzeria and creole food joint for a working class meets college students night out—try the sweet yet tangy tropical sangria—across the street—no kidding—from Don Quijote, or Paladar, a Cuban-Puerto Rican establishment with excellent ropa vieja, but to step into modern chic by the bay, we head down to Costa.

A few years ago Mayagüez hosted the Pan American Games (the Olympics for the Americas) and a huge influx of preparatory money created a long waterfront recreation area with playgrounds, bike trail and a dramatic modernist concrete slab restaurant with a massive outdoor deck. Once the Games were over, the restaurant was empty.

Enter Diana Carrasquillo Caraballo and Xavier Soto Delestre. She’s from Adjuntas, a coffee town in the central mountains; he’s from Mayagüez. They met as students at different colleges in 2003 and married in 2006. While her degree was in pharmacy and his in computer systems—mostly to please their parents—they both simultaneously studied hospitality and culinary arts and following graduation jumped into Soto’s family’s business, a popular countryside creole restaurant called El Balcón de Tío Mon (Uncle Mon’s Balcony). They began running a kiosk at the annual coffee festival in Maricao selling empanadas and soft drinks when they developed the recipe that would become their signature dish: crema de monte. It’s a creamy bisque made of root vegetables in a good stock. They add little croutons of crispy rice from the bottom of the pan which we call pega’o (stuck). 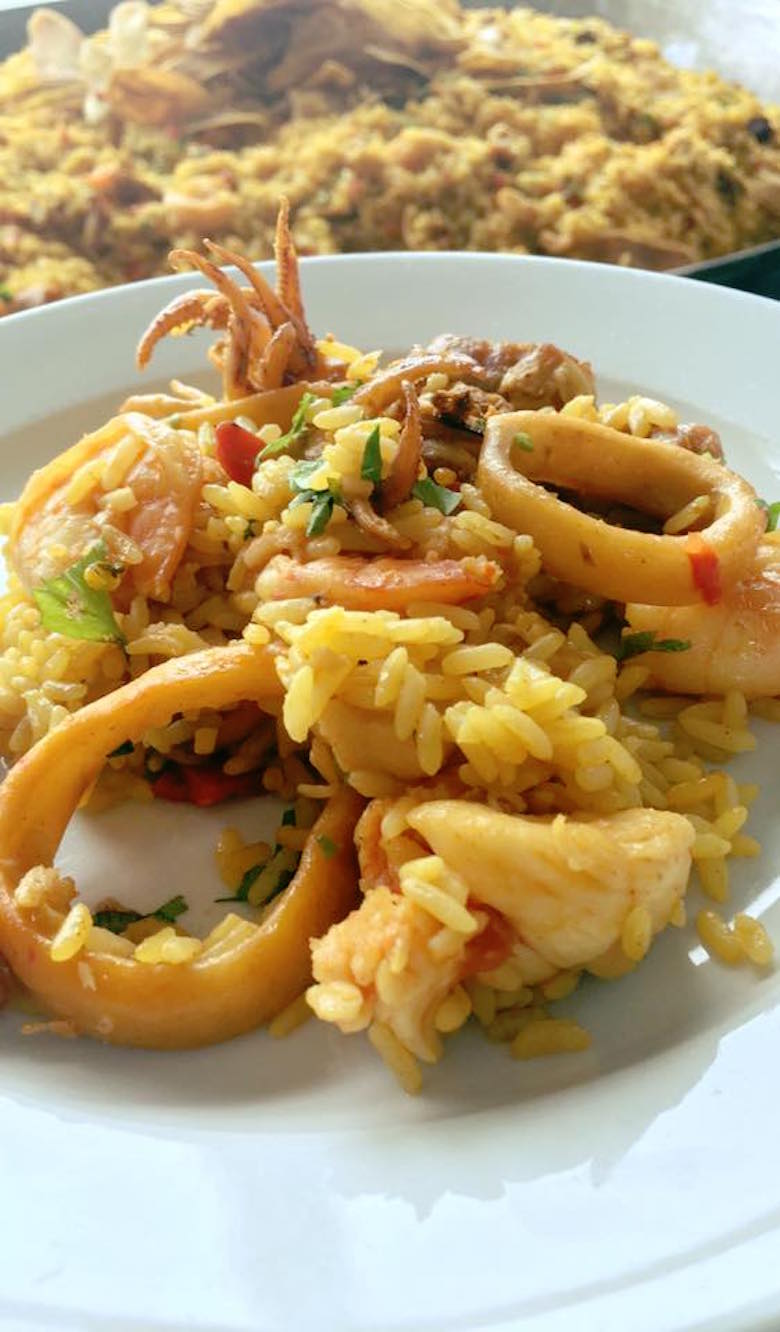 All week long the lunch is packed with locals on lunch break, office parties, airline execs and holiday makers on a foray from the beach.

They were running the kiosk and a growing catering business when the restaurant became available in 2011 and they won a bid on the space. But it wasn’t ‘till 2013 and at risk of losing the contract that they were able to bang it together and open, with the paint still wet on the walls.

Without any publicity or advertising they have made a roaring success of it, driven by a Puerto Rican cuisine lunch buffet that features the crema de monte, of course, and specialties like salt cod with root vegetables, refined rice and beans and other stepped up dishes. All week long the lunch is packed with locals on lunch break, office parties, airline execs and holiday makers on a foray from the beach. The weekend brunch takes traditional breakfast to the island with massive Cuban sandwiches, Puerto Rican style corned beef, omelettes accompanied with sweet plantains, oatmeal with toasted sugar, in addition to croque monsieur and traditional pancakes and steak and eggs. All the breads are made at their new retail shop Born For This, a little father up the coast. And for that magnificent sunset and the hip social scene, the menu features more than 100 tapas and an extensive wine list with some of the best prices per bottle you’ll see at a good restaurant on the island. The outdoor seating gives a sweeping view of the coastline.

“We have a unique style,” says chef and co-owner Xavier Soto. “We started Costa because I needed to express myself as a chef, express my ideas. I couldn’t do that in a strictly creole restaurant. And now, fortunately, we’ve had so much success that we have the catering, kitchen and the retail shop, which is our new baby.”

And where, by the way, you can pick up crema de monte by the quart to take back to your rental apartment in Rincón.