Diary of an Oyster Farm Apprentice: Getting Started in Shinnecock Bay 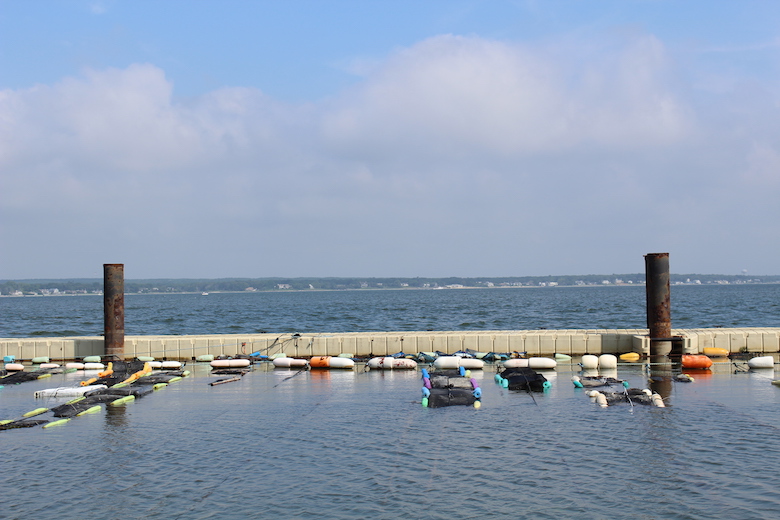 Down on Dune Road in Hampton Bays, across the small spit of land that separates the Shinnecock Bay from the Atlantic Ocean lies an unlikely opponent to the threatening pollution of Long Island’s bays and ocean.

Thousands and thousands of oysters.

From a distance, the oyster beds look like a flotilla of noodles and mesh cages. The water is dotted with the neon burst of floating noodles—the bright contraptions are tied to the beds, making it possible for volunteers to easily pull their oysters in and out for their weekly check-ins as part of Suffolk Project in Aquaculture Training or SPAT. The acronym is also, not-so-coincidentally, the name for oyster larvae when they attach to a surface. 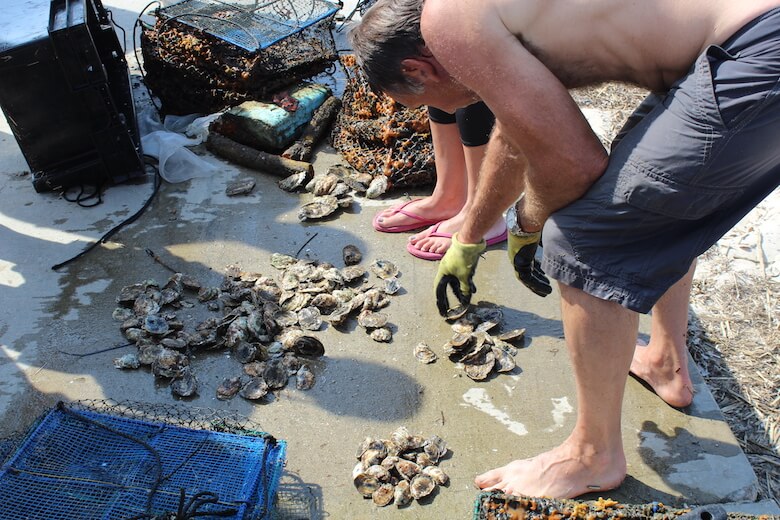 Developed 17 years ago by Kim Tetrault, the SPAT program is Tretault’s baby. The program boasts around 250 members between its Southold, Hampton Bays and Sag Harbor sites. Participants are invited to manage 1,000 oysters a season in exchange for $200 in membership fees. They can harvest the oysters whenever.

Most importantly to Tetrault, the program encourages participants to start thinking green about the local bays and ocean.

“Environmental awareness starts at home,” says Tetrault. “You’re really not supposed to put anything in the water—no detergents, no dishwashers, no fertilizers.”

A Cornell Co-Operative Extension employee for 21 years, Tetrault initially pitched the idea for SPAT nearly two decades ago. At the time, he was running Cornell’s shellfish hatchery in Southold and noticed that a lot of community members were interested in participating. He had been going to shellfish restoration seminars and was interested in boosting outreach. 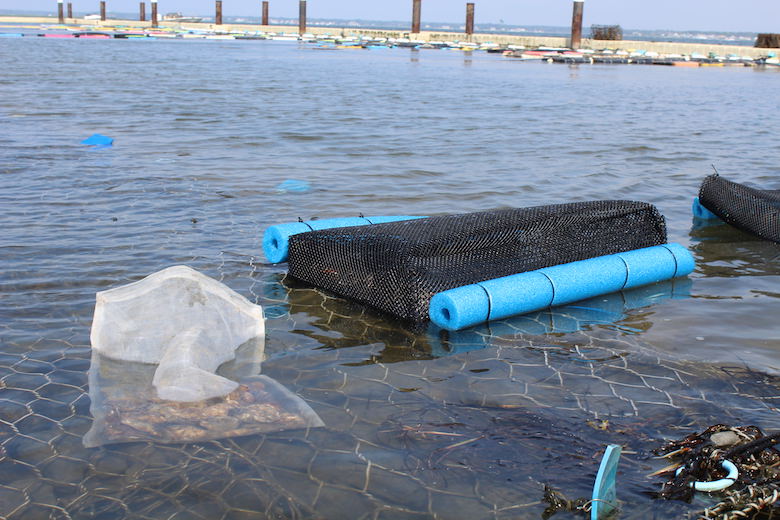 Describing oysters as the “king” of cleaning water, Tretault says that they are “the bomb when it comes to filtering the water.”

An adult oyster can clean 50 gallons of water a day, sifting everything from heavy metals to bacteria in the water, as well as particulates like nitrogen. Fellow bivalves like clams or scallops clean nowhere near that same amount.

Reticent to measure the program’s success in the amount of oysters set out or gallons of water filtered, Kim says that every year the program’s participants devote 17,000 community volunteer hours. Continuing, he says that, “those are metrics that mean something to me.”

“You’re helping the environment and you’re eating the fruit of your labor,” says Liz Colantonio, a Hampton Bays summer resident who is in her fifth season as a recreational oyster farmer.

Describing the activity as a “social thing,” Colantonio admits that its not easy farming oysters and if you don’t like getting dirty, maybe it’s not for you. Over the summer season the cages get “fouled” with seaweed, parasites, sea squirts—even crabs.

Colantonio recommends to “get your manicure after” checking the cages. 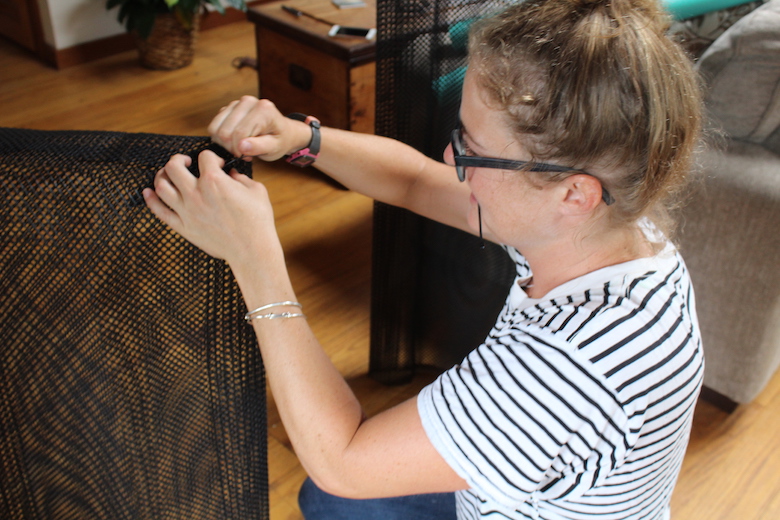 However, for shellfish aficionados, a little gunk under their nails is a small price to pay for the delectable oyster.

“Don’t over think it. You don’t have to pet them, you don’t have to walk them,” says Ira Freiband, 67. Clocking eight years in SPAT, he is the program’s longest participant; some call him the mayor.

“It’s another way to be on the bay,” says Freiband. “I love to fish, oyster, clam, duck hunt, goose hunt.”

Freiband recommends stopping by at least weekly to scrub the cages, so that water flows over the young bivalves. He says it is especially important to look out for baby crabs in the cages, as they grow up and can start eating your bounty.

Most participants lose on average between 10 and 20 percent of their oysters to pests. Although SPAT initially required 50 percent of the oysters to be donated back into the program, members can do whatever they want with their shellfish at the end of the two-year growing season.

For Phil Blinderhofer, 67, a lifelong Hampton Bays resident, donating oysters back to the bay is part of the fun. Every year he sends around 15 percent back into the wild, setting them up near marinas so that they can hopefully spawn on dockheads or other hard surfaces. Unlike clams, their mollusk cousins, oysters like to be attached to hard surfaces. 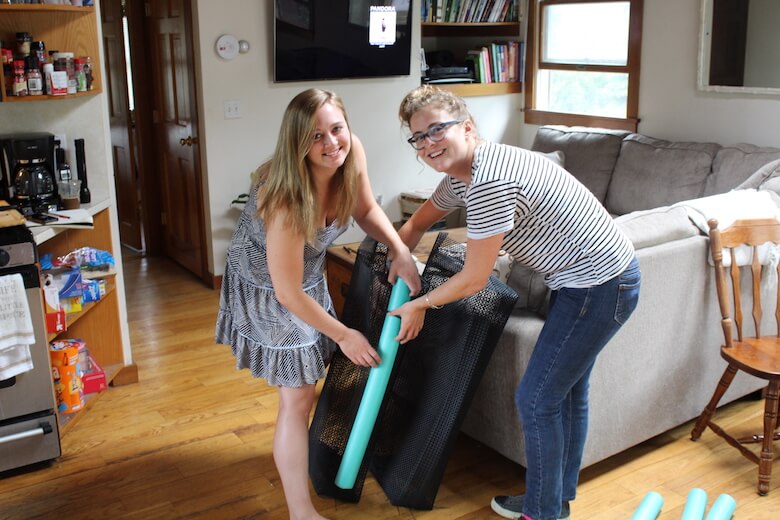 The oyster beds are made with floating noodles—the bright contraptions tied to the beds, making it possible for volunteers to easily pull their oysters in and out for their weekly check-ins.

With eight years in SPAT, Freiband has raised lots of oysters; he estimates that he eats about a dozen a week. His favorite method is a raw oyster served raw on the half shell, with a mix of cocktail sauce, ketchup, hot sauce and then a squeeze of lemon or lime, which is the secret extra ingredient.

Since its inception, Tretault has seen more and more young people become involved in the program, which he likes. He’s also seen a few participants who were interested in starting their own hatcheries use the program to learn the ins and outs of the business. “it is the only place where you can be given the information freely,” says Tretault.

However, his older participants are just as inspiring. He has a few octogenarians who participate, including one who recently passed. At the time, he was the program’s longest running member. It’s easy to see why Tretault calls SPAT an “extended family.”

“We come out for each other, we help each other,” says Tretault. “it’s not just like we get our dues paid. We keep the program alive.”

This is the first installation of my diaries as an oyster farm apprentice. I’ll be taking part in the program through the Fall and sharing the journey with Edible East End. Follow along on Instagram (themiddleoftime) for my weekly check-ins on Thursday afternoons.