Great things happen when Colin Ambrose and the Sag Harbor Express come together to host a block party. 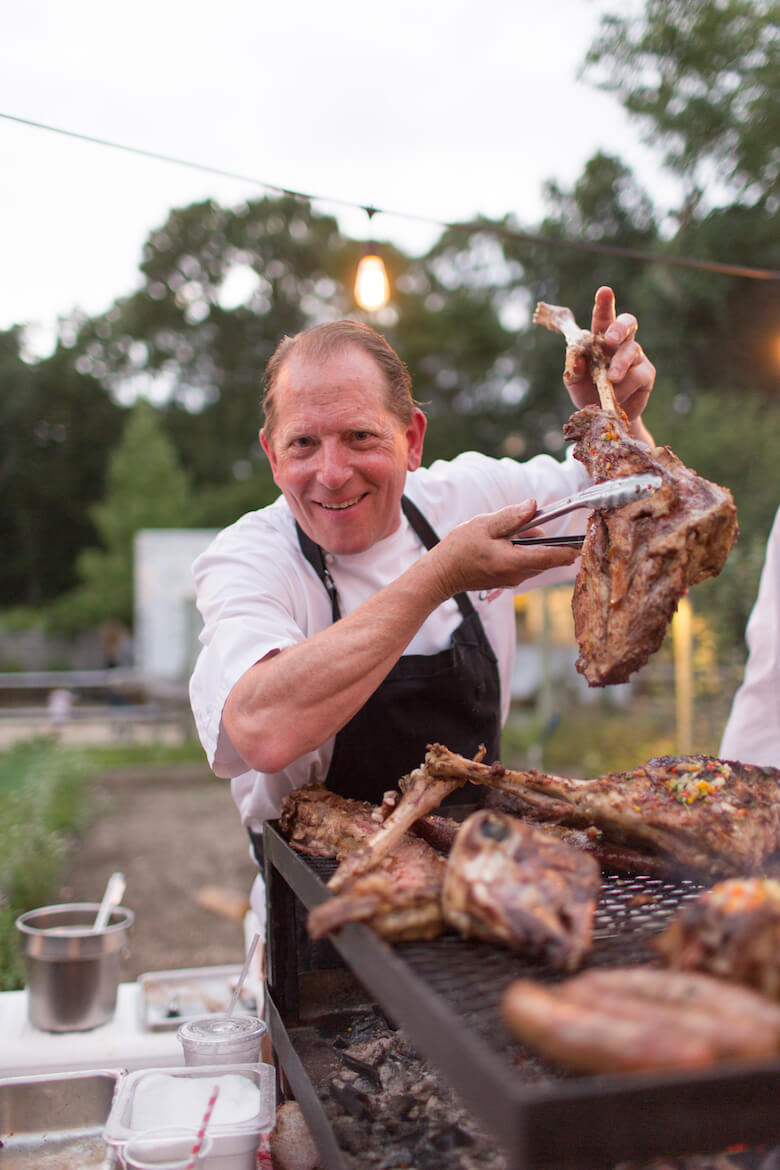 Great food, great music and great art: Three things that East Enders seem to excel at. Also: Great community generosity. At the Turnpike Block Party this past weekend, such greatness was in ample supply. The party ended a summer focused on saving the Sag Harbor Cinema, destroyed in a massive fire in December 2016.

The Cinema, to many, stood for the cultural history of a village that has long embraced the arts as part of its identity. It’s not melodramatic to say that it stood for a way of life, especially for us year-round residents. The Sag Harbor Partnership—the non-profit group headed by artist April Gornik which seeks to purchase and rebuild the Cinema—understands this, and understands the overlapping connections artists, farmers, and chefs in the area enjoy. 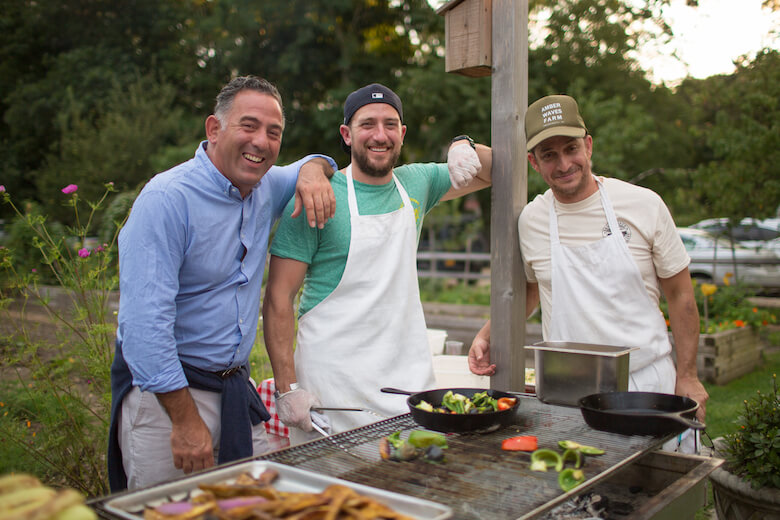 It was chef Colin Ambrose, owner of Estia’s Little Kitchen on the Sag Harbor-Bridgehampton Turnpike, who originally approached the Sag Harbor Express with the idea to hold an annual “block party”—a foodie/music/art party—to raise money for non-profit organizations in Sag Harbor and Bridgehampton. The Express was immediately on board—and has been intrinsic to the event’s organization and eventual success. This year’s party was held to raise money specifically for the Cinema, since the deadline for purchasing the old site is approaching. 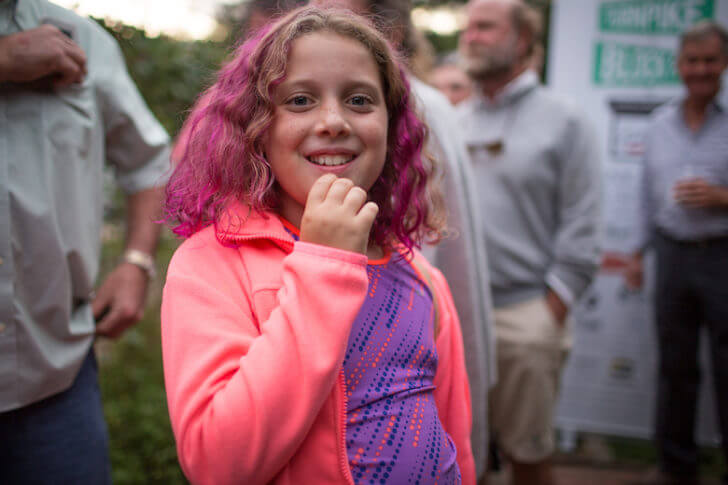 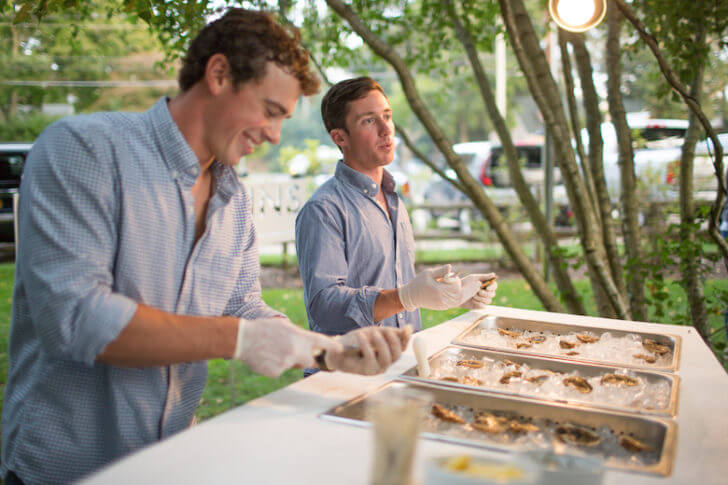 The Spaghetti Westerners, with special guest performers Inda Eaton and Gene Casey, provided some amazing live music sets we could hear down the Turnpike as we approached the Block Party. Once inside Estia’s Little Kitchen, we were greeted by three-dozen works by local artists—including Edible’s own Lindsay Morris—which were donated to be auctioned off.  Out the back door into the garden, and a lively local crowd was already forming a winding line from the tent to three enormous grill stations next to the edible garden. 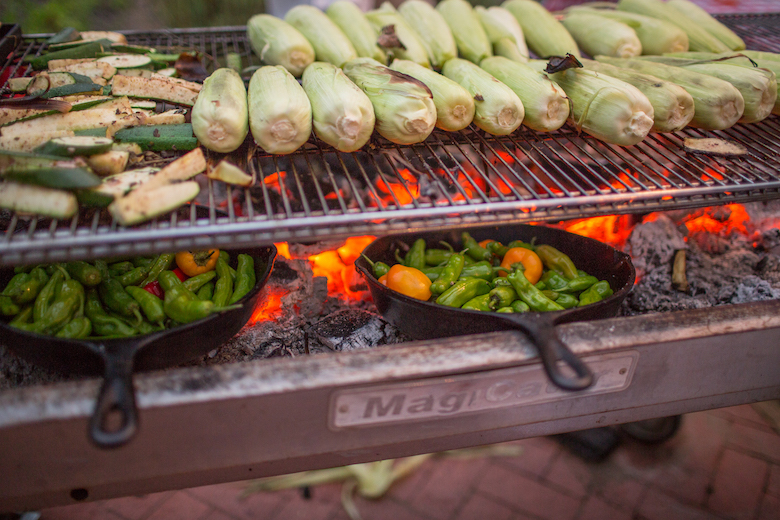 One of the three enormous grill stations next to Estia’s edible garden.

Luckily, those of us on the line were treated to Montauk Brewing Company beer, and wine by Palmer Vineyards and Macari, as well as passed black bean and veggie tortilla rolls.

Once at the grilling station, the ever-friendly chefs and staff from Almond Bridgehampton and Estia’s piled plates from the Argentine-style asado (created on an open-fire meat grill known as a parrilla). 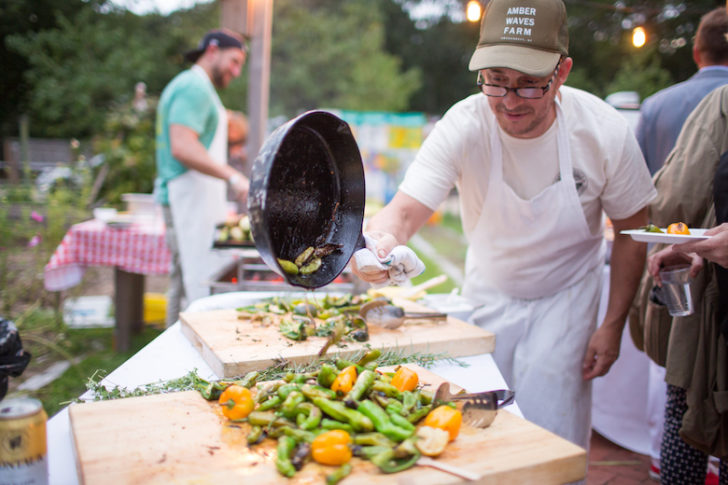 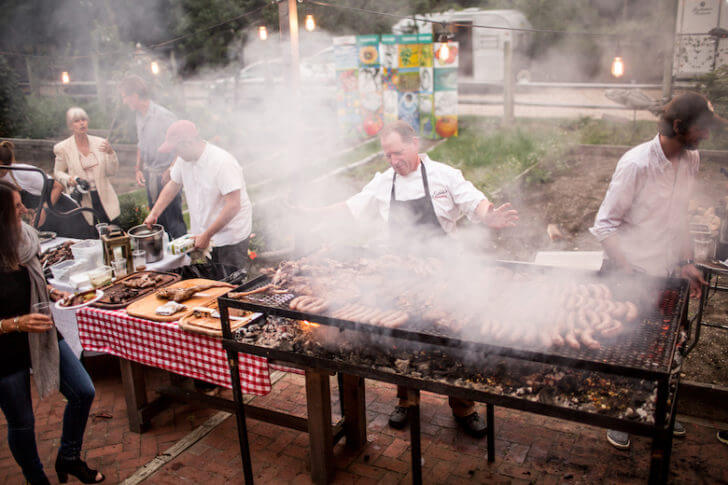 Tender grilled skirt stake and sausages donated by Cromer’s and Schiavoni’s Market were paired with Almond’s “Vegetable Extravaganza”: roasted corn donated by Jim and Jennifer at Pike Farm, and Tandoori spiced Japanese eggplant, blistered Shishito peppers, grilled zucchini and sweet peppers donated by the team at Amber Waves Farm. There were some seriously mild and hot fresh salsas—good for smothering on everything.

Most of all, there was a lot of genuine community enthusiasm and neighborly love going around. And some looking to the future when we all gather together again at the future Sag Harbor Cinema.