Don’t miss your chance to shop local at the market before its seventh season comes to a close. 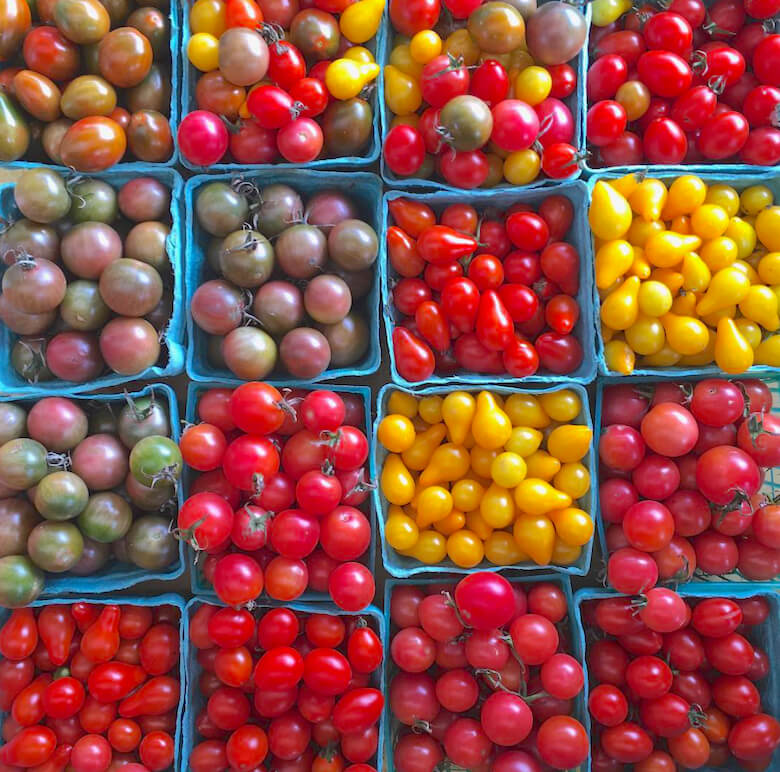 Tomatoes, anyone? • Photo by Jove Meyer

The Greenport Farmers Market is coming to the end of its seventh season in operation. It runs every Saturday from 10:00 a.m. to 2:00 p.m. in the municipal parking lot on South Street between First and Second through September 16. Local businesses from around the North Fork sell vegetables, eggs, meat, cheese, wine, body products, flowers and more.

Started by volunteers back in 2011 at the urging of community members, the market has changed locations twice and hit some bumps along the road, but has survived and even thrived. One of the longest running vendors is Didi Catapano of Catapano Farms. They started in the second season and have lots of repeat customers. They grow a lot of Latin American specialties, influenced both by their customers and employees. The day I was there they had bundles of El Salvadorian bean plants for sale, in addition to Scotch bonnet peppers.

Violet is checking out what's in the market today!

For many other vendors, the Greenport Farmers Market is one of their first and sometimes only markets, a way to start out when their business is still new. Nicki Gohorel makes custom nut butters under the name Simply Nicki out of the Orient Country Store. This season was her first market. “It was cool seeing people’s reactions,” she said. She lets visitors taste test all her many flavors, so the reactions have been good. “Even when the market doesn’t seem that crowded, I go through my jars,” she said.

Many of the businesses that have come out of the Stony Brook University Business Incubator at Calverton have also participated in the Greenport Farmer’s Market, including Backyard Brine pickles, 63 South Chill Street ice cream, and Nofo Crunch granola. Cheryl Platt, of 63 South Chill Street, has been selling her ice cream for three seasons, and it makes for a delicious breakfast on a hot day. Her ice cream is made from Ronnybrook Dairy milk, organic eggs, sugar and extracts, with no thickeners, and has earned her many repeat customers.

Beautiful soaps by Down to Earth @savannahc_420

Alice’s Fish Market is another first-time vendor this season. Randi Parker, who works their booth, says their participation is more about advertisement since their shop is right in town. “It’s a smaller market, but the advertising is worth it,” she said. They’re planning to be back next year, and are even helping plan for future potential fall and winter markets.

The Greenport Jerky Company, who is there for its second year, also plans to be back next year. They also sample their many flavors of beef, turkey and fish jerky and are always a popular stand.

Crooked House Farm joined the market late in the season, since they’re a new farm and their crop is tomatoes. While not certified organic, the farm, run by Lora Schiavetta, uses no pesticides or plastic mulch and kills bugs by hand.

Another big draw for sampling at the market is wine. Currently Suhru Wines and Surrey Lane Vineyard both sample and sell their products at the market.

Penny Rudder of Greenport comes almost every week, sometimes with her children and grandchildren.  “I love the new nut butters and kombucha this year! And Didi at Catapano is so dedicated to the market and to the customers,” she said.

Many of the vendors, including Catapano Farms, participate in the Farmers Market Nutrition Program, which allows low-income women, children and seniors to buy fresh fruits and vegetables at farmers markets using their food allowance from the program. This is one market that nourishes its community, indeed.