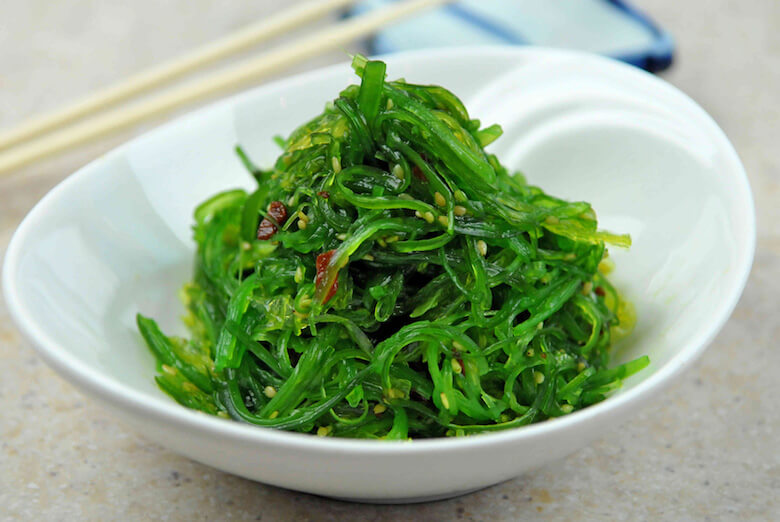 Attending the Kelp Tasting Dinner at Noah’s earlier this summer has me thinking differently about seaweed-laden, low tide swims. I study the different kinds of plant life, and contemplate eating it, but luckily I learned enough at the event to prefer my edible seaweed harvested by experts.

Steve Schott, Marine Botany Specialist at Cornell Cooperative Extension (CCE), certainly knows a lot about seaweed, and he shared some of his knowledge with us that night at Noah’s, after a delicious and surprising five-course meal that included locally grown kelp in every dish.

Sugar kelp thrives in our region during the cooler months (November to April) and is one of the most widely cultivated seaweeds in the world. People eat it whole or as an additive in many foods, and it also has cosmetic, pharmaceutical and agricultural uses. Together with the University of Connecticut, CCE is growing kelp at five different locations within the Peconic Estuary as part of an aquaculture feasability study to see how the species thrives in our environment.

This week's #fieldworkfriday shot is all about kelp, of course! Kim and Steve were out harvesting the lines today, and just delivered it to @noahsgreenport for tonight's dinner! #kelp #nofo #weareccemarine

Chef Noah Schwartz had used other types of seaweed before, but this was his first time cooking with sugar kelp.

“It was an adventure, and it’s still a work in progress,” he said as he introduced the first dish, a kelp-wrapped seared yellow fin tuna with wakame seaweed salad and togarashi spice. The dinner felt like an Iron Chef competition, with the same ingredient used different ways in different contexts.  Samples of the kelp were harvested over several weeks, with some being dried out to be crushed into a powder, some dried for a few days and then soaked to be more pliable and workable (and able to be wrapped around slices of tuna), and some left fresh and still chewy.

At my table at least, the diners were impressed with Chef Noah’s first attempts. “It’s the best kelp I ever had!” exclaimed Liz Sweitgart, owner of the Times Vintage shop in Greenport.  From snippets heard around the room, it seemed most diners felt the same way.  Guests included artists, scientists, foodies and environmentalists from both forks and of all ages.

“It’s the only kelp I ever had,” half-joked hairstylist Melissa Gabrielsen. In fact, kelp may already be hiding in your toothpaste, shampoo, salad dressing, pudding, cake, and dairy products. Kelp cultivation is a thriving industry in Maine, and while Long Island is on the southern end of the East Coast area where it is found, it could be a viable winter crop in our region. Kelp is full of vitamin C and trace minerals like manganese, nickel, magnesium and iron. When harvested from certified areas, it is as good as organic. Even where there is excess nitrogen, kelp can be grown with no negative impact on the quality of the crop. It actually sequesters carbon and nitrogen, so it would have an overall positive impact on our environment.

Plus: It’s delicious. Especially in the flourless chocolate cake with kelp powder that Chef Noah made and topped with a piece of candied kelp and a beautiful rose colored syrup that had been boiled down from the water the kelp was cooked in. I heard rumors that there would be more of these dinners, and I can’t wait for the next one!