Want to Help Clean Our Waters? Shell It Out This Saturday

Support the East Hampton Town Shellfish Hatchery by attending Shell It Out Hamptons this Saturday.

Tech entrepreneur Jeff Ragovin and his husband, local artist Kurt Giehl, have had a long love affair with East Hampton—as kids, long before they ever met, and now as partners who enjoy the art, eco-system, and culture of the East End.

They didn’t permanently move in full-time until last year, but they had laid down roots strong enough to grow produce, dig for clams, and fish for oysters like pros.

After discovering the East Hampton Town Shellfish Hatchery a few years back, the couple fell in love and made a commitment to do something that gives back to the establishment each year.

Hence, the “Shell It Out Hamptons” event taking place this year on September 2 at the home of Ragovin and Giehl, steps from Acabonac Harbor and the historic Springs Art District at 132 Old Stone Highway. The cocktail reception will, of course, feature a massive raw bar of local oysters, clams, and shrimp, and shellfish of the cooked variety as well in the form of clams casino and baked clams.

Keep your eyes peeled for local celebs if you’re able to grab tickets—sales are already past 100 tickets and going quick. 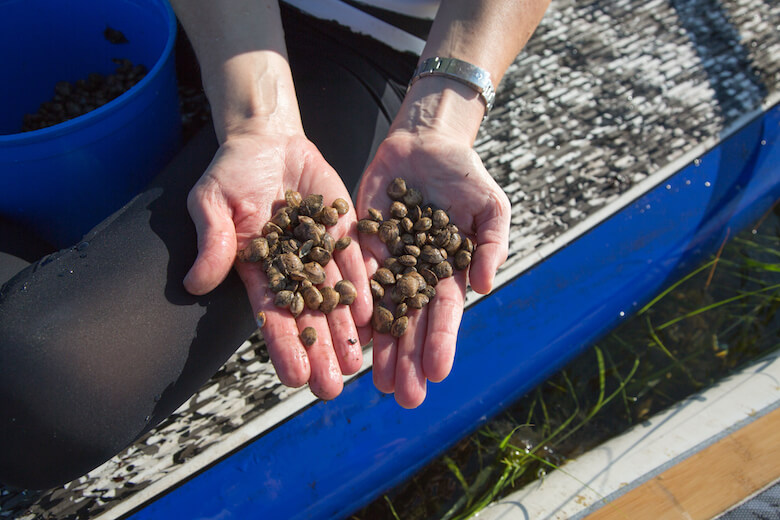 A sampling of the 100,000 juvenille hard clams spread by volunteer paddlers in 3 Mile Harbor.

“Not only are oysters delicious, they are really hardworking,” says Ragovin. “A single oyster filters 30-50 gallons of water a day. So an entire oyster bed could do some serious cleaning. This year we launched the first annual benefit in support of the East Hampton Shellfish Hatchery in hopes that the funds we raise for them can help them with new gear, equipment and research.”

Aside from being delicious, shellfish are actually an incredibly valuable part of the ecosystem, since they act as mini water-filters (one adult oyster can filter upwards of 50 gallons of water each day; clams filter at about half that rate) that help alleviate some of the more harmful elements in local harbors and bays.

Launched in 1989 and housed in one of the last remaining structures from the World War II Naval Torpedo Testing Range, the Hatchery—located on the shore of Fort Pond Bay in Montauk—was initially given the green light and the ability to break ground thanks to a grant to East Hampton Town by New York State.

It was founded after residents expressed a serious desire to create a shellfish seeding program to help offset a regional plague of “smothering algae blooms,” also known as brown tide, that began to pop up in 1985, devastating the area’s shellfish resources.

Thanks to the East Hampton Shellfish Hatchery, the local waters are seeded with millions of clams, oysters and scallops every year and provide recreation, food consumption, and keep waters sparkling clean. 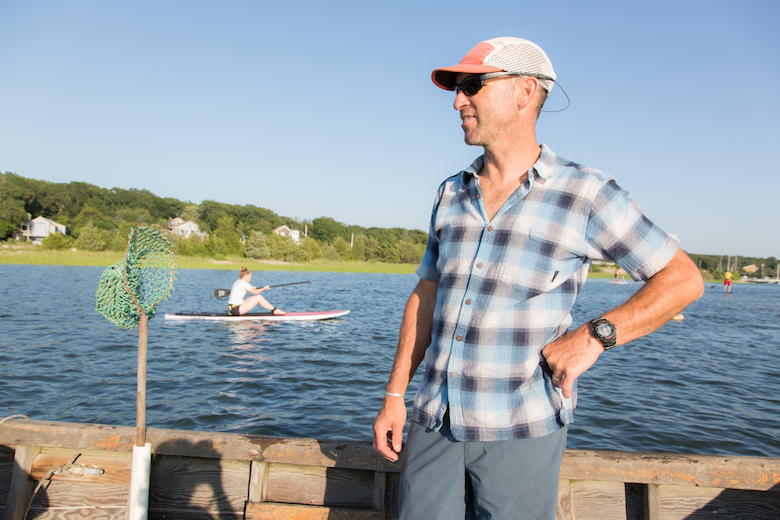 Barley Dunne, who heads the hatchery, which seeds waterways with juvenile scallops, clams, and oysters each year.

“We are all about clean water and a healthy ecosystem and the hatchery has launched so many interesting programs with oyster gardens that local residents can take part of. It’s so important that we support the organizations that will impact the future of our waters,” Ragovin says.

They constantly welcome school groups and offer open-house tours in the interest of educating the community on the local ecosystem and offer some more niche programming, like oyster gardening.

“We also launched a silent art auction with some incredible artists that we hope our guests will take full advantage of,” Ragovin says. “And we hope to keep this going for many years to come.”

Tickets for Shell it Out Hamptons are on sale now. Tickets are $150 per person. All proceeds go directly to the East Hampton Town Shellfish Hatchery. Purchase your tickets online here.