This Saturday in Sag Harbor, Join Chef Sandy Dee Hall for a Fundraiser Dinner for Sourc[ed]

Sourc[ed] wants to create farm-to-table restaurants in communities without access to nutritious food—all at the same price point as McDonald’s. 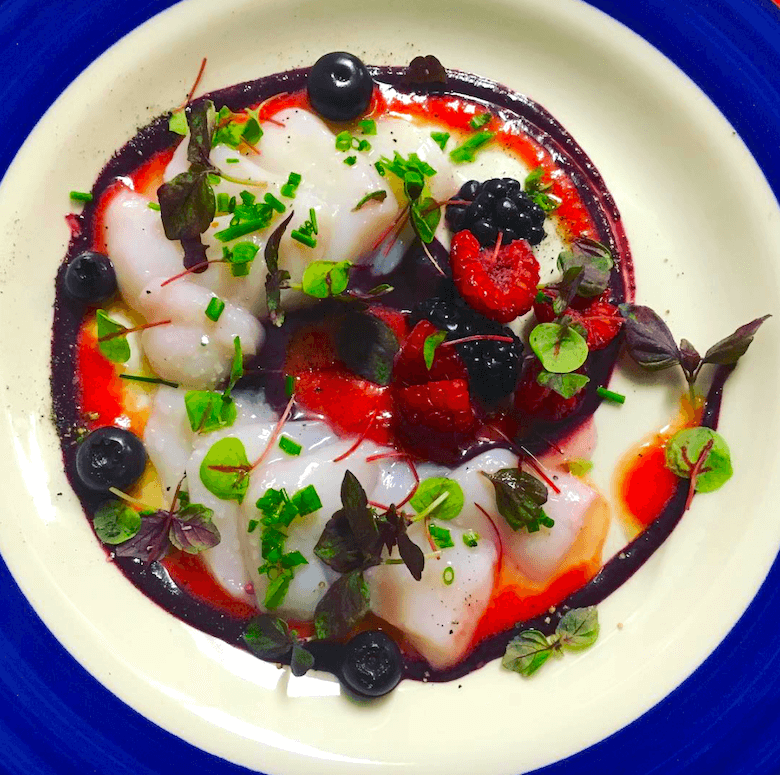 Chef Sandy Dee Hall of Sag Harbor’s Dockside Bar and Grill will be hosting three special dinners with multi-course tasting menus this coming Friday, Saturday, and Sunday evenings (August 25 through August 27). The dinners will benefit Chef Hall’s non-profit, Sourc[ed], which works to increase access to farm produce for low-income people living in New York City. Through the non-profit, children under six are eligible for free CSA boxes from the 66-acre working farm that Sourc[ed] operates in upstate New York.

In addition to bringing farm-fresh food to individuals who may not have had access otherwise, Sourc[ed] teaches children from inner city areas about preparing healthy food. The non-profit provides multiple opportunities for food education, including produce-driven food preparation and instruction that participating children use moving forward. “I teach an 8-week syllabus to kids and give them a CSA to go home with so they can cook what we covered at home,” Chef Hall says. Hall’s eventual goal is to open non-profit farm-to-table fast food restaurants in communities without access to that kind of food—all at the same price point as McDonald’s.

We're in Sag Harbor, NY for the weekend! First stop, Dockside Bar & Grill on Bay Street across from the Sag Harbor Yacht Club! This restaurant is at the former American Legion building. There's so much history in this little wailing village! Have you ever been? Swipe left to see more!

Chef Hall was formerly the chef at New York City’s Black Tree, and was also the chef and owner of Southampton’s North Sea Tavern and Raw Bar. In the city, Hall rose to local infamy when he adopted a lamb that had been abandoned by its mother at Violet Hill Farm in West Winfield, NY. Hall was eventually forced to part with Smokey the Lamb, once it became evident that Hall could not legally own a soon-to-be 200-lb. farm animal in his New York City apartment. (For the record: It is illegal to own most farm animals in the city, and there’s even a hotline dedicated to “Illegal Animal Complaint[s].”)

Chef Hall, as it turns out, has much in common with Smokey the Lamb. An abandoned child himself, Hall was an orphan who was never adopted. He spent his childhood shuffling from group home to foster home. Meals were haphazard and often unhealthy—hot dogs, frozen pizza, microwavable meals. And an indulgence was a night out for Chinese or fast food. This experience cemented in Hall an understanding about the lack of access to quality food in low-income communities.

After graduating from high school, Hall joined the army, his time in which funded a college education. Finance degree in hand, he intended to follow his collegiate career with one in finance, but cooking got in the way. He became a waiter, where, at The Breslin, he worked with influential chef April Bloomfield, who changed his perception of food—and life.

Eventually collaborating with his best friend, bartender Macnair Sillick, Chef Hall decided that he wanted to provide food opportunities to children who lived lives similar to the one he had lived growing up. Hall knew the lack of food options for low-income kids stuck living in group homes and foster care; he wanted to do something to change the cycle of poor eating.

And so Sourc[ed] was born. Saturday’s dinner, a showcase of talent and intent, will be an 11-course chef-curated tasting menu with wine pairings, with all proceeds going to Sourc[ed]. Among the many courses: Salmon with horseradish, cream cheese, and roe; liver with blackberry, orange, and rye; hand-made pappardelle with duck leg and tomato; and bread with miso butter and burrata. “It’s all from the local farmstands and fishermen,” Hall says.