The Halyard opened in Greenport on Thursday, August 17. Don’t let summer end before dining there. 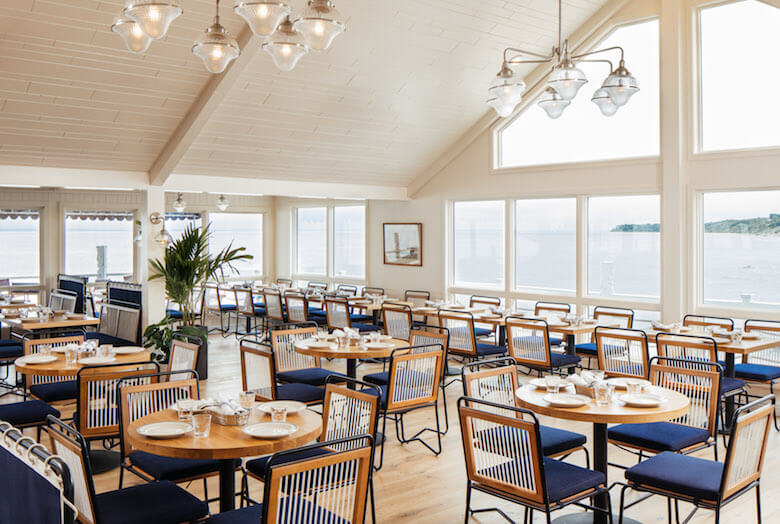 Galen Zamarra, the award-winning chef of New York City’s Mas (farmhouse), has his heart in his newest restaurant, The Halyard, in more ways than one.

The restaurant is part of the Sound View, a landmark on Long Island’s North Fork where Zamarra once stayed with his wife more than a decade ago. During that visit, Katie Zamarra’s wedding ring slipped off her finger and tumbled down a bathroom drain.

“At the time, it was the most expensive thing I ever bought in my life,” Zamarra recalled one morning weeks before his restaurant opened.

With the Halyard, Zamarra has come full circle. The restaurant is among a handful of new eateries on the North Fork opening under the direction of big-name chefs, but Zamarra has made a calculated move to succeed in a seasonal community.

He’s chosen a venue with breathtaking, year-round views and an arrangement with broader financial support than a stand-alone restaurant. Combined with other passions he’s pursuing through the property, he’s hoping The Halyard will make a splash long after the summer hordes disappear. 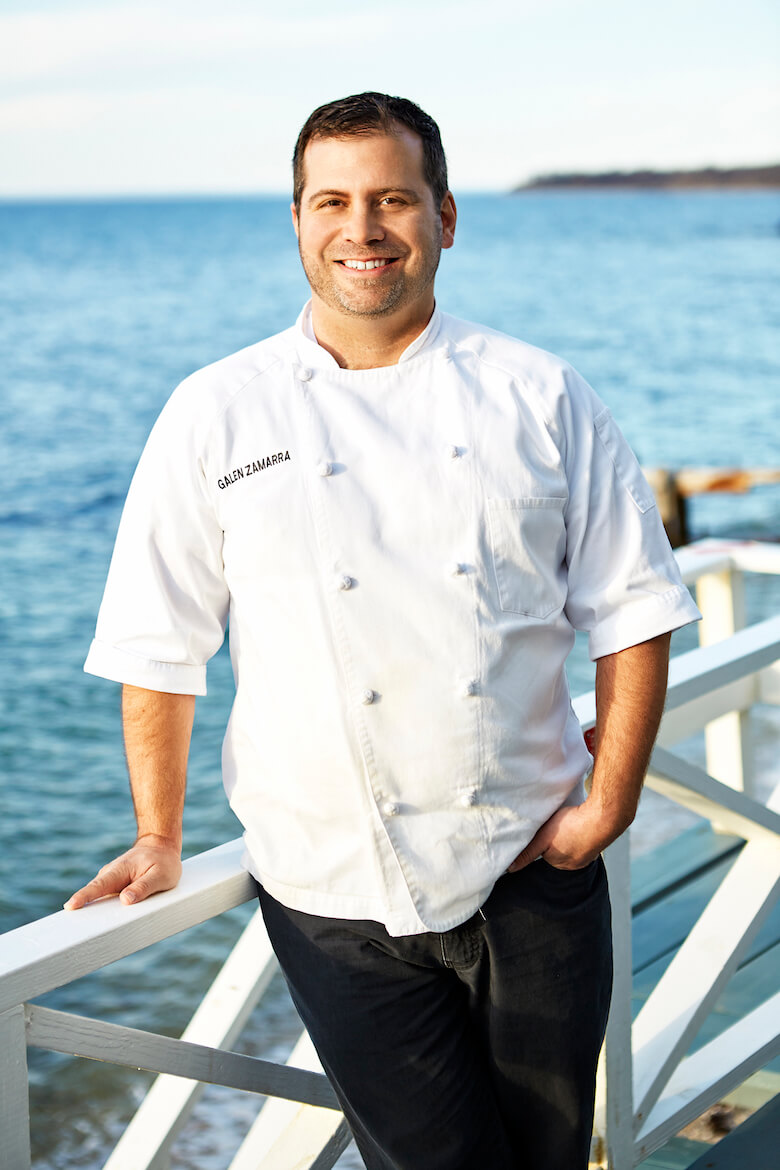 Chef Galen Zamarra is hoping The Halyard will make a splash long after the summer hordes disappear.

Few if any other restaurants on the North Fork have direct access to the beach on Long Island Sound, an advantage you can’t miss when you walk in and come face-to-face with walls of massive, picture windows.

On this morning a bright haze illuminated the Sound, where the water was grey and glassy smooth. As a kayaker and paddle-boarder glided past, they seemed to float beyond the windows like creatures in an aquarium. Zamarra, as docent, gave his take on local marine life: lobster (beignets), porgy (grilled whole), blue fish (smoked), and oysters (pot pie).

“When people come out to the North Fork, what they are coming out for is to experience local wine and seafood. Those are the things we want to give them,” Zamarra said.

He led the way to the restaurant’s deck to show off the Sound View’s adjoining, beachfront rooms, which perched above the water in a curve along the shore.

The combined properties evolved from a beachside concession stand started in the 1930s by a beloved local, Jack Levin. The new owner is Eagle Point Hotel Partners, an ambitious, young firm with hotels in Hawaii, Napa and other resort destinations, giving Zamarra access to resources in the wider field of hospitality.

During the Halyard and Sound View’s multimillion-dollar renovation, Zamarra said, he and his wife couldn’t resist joking with the contractors: “We were like, ‘Could you check in Room 2? Is there a wedding ring … in the sink?’” 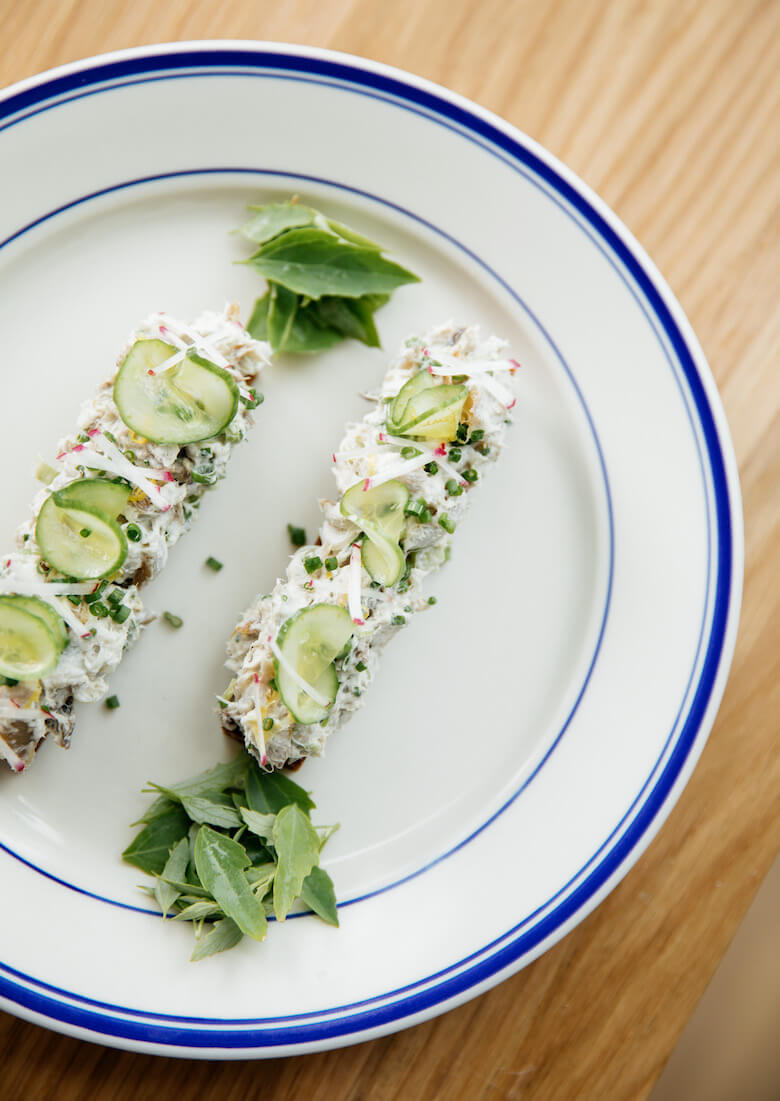 “When people come out to the North Fork, what they are coming out for is to experience local wine and seafood. Those are the things we want to give them,” Zamarra said.

Zamarra and his chef de cuisine at Mas, Bruce Miller, have developed menus for the Halyard, a lounge cafe, a piano bar and a poolside bar. The emphasis is on fun, casual dining: clam bakes, deviled eggs, Oyster Po’ Boys.

As the weather cools, the menu will shift to heartier fare, such as duck cassoulet. Indoor events will supplement the Sound View’s outdoor activities, which include kayak and paddle-board rentals, yoga on the beach and morning hikes through the Arshamomaque Pond Preserve, a 14-acre sanctuary across the street that Levin helped establish. A British recording label, Communion, has already held a small music festival, and there are plans for artists from Joe’s Pub to come in from Manhattan to perform.

The Halyard gives Zamarra a chance to revisit an issue he’s passionate about: How to support and manage local food sources.

Nearly 15 years ago when he was opening Mas, the farm-to-table movement was gaining ground, and New York chefs wanted more access to fresh, local products. Zamarra and other chefs including Peter Hoffman and Jimmy Carbone worked with Cornell Cooperative Extension on Farm-to-Chef Express, a project that created trucking and marketing networks to connect regional farmers with New York City restaurants.

Zamarra is working with Cornell Cooperative Extension again, this time on a project called F.I.S.H., which is promoting food from the area’s greatest resource: The sea.

The project launched this summer to shift demand away from imported seafood and get people to try local fish species that are abundant but not so well known. It’s trying to create cooperatives that will support local fishermen, just as Farm-to-Chef Express made it easier for small farmers to reach customers in New York.

“A big thing I’m passionate about is, there is a lot of misleading food information that gets to the public. When you market something called ‘organic salmon,’ what the public perceives that message to mean is very different than what it really is,” he said. “We’re making the connections direct to fishermen and local purveyors. We are not going to have salmon on the menu, because salmon is not a local product.”

Although Zamarra never found his wife’s ring, he is finding ways to advance his passion for food beyond the dining table. “I like that sort of movement behind creating something,” he said.