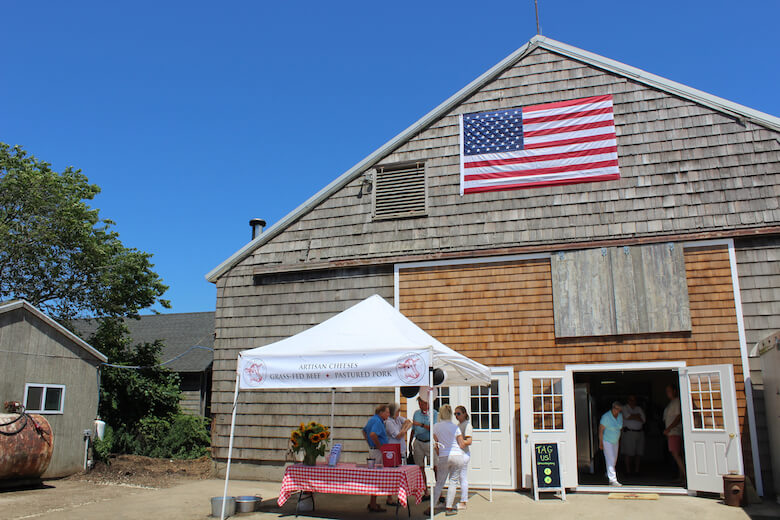 After nearly two decades in business, Mecox Bay Dairy opened the doors on its first official stand last week. Decorated with a touch of Americana and family photographs, the new digs are located on the farm at 855 Mecox Road.

Although the family plans on continuing their outreach through East End farmers markets stretching from Montauk to West Hampton, Peter Ludlow—a 5th generation farmer—said that the idea behind the stand was that customers “should be able to get everything at farm.” Surprised by how many people turned up for the opening, Peter said that he and his family are “looking forward to better serving customers interested in locally-sourced meats, milk and dairy” products.

The stand is open all day and will be self-serve, an idea that was borrowed from the Pennsylvania farmers who they work with regularly. However, in order to bring the neighborhood feel to the realities of the modern world, customers can buy their products using credit cards as well as cash.

Built into their working dairy barn, which was originally a potato barn, the stand will feature their grass-fed beef and pastured heritage pork, as well raw milk and artisan cheeses. From ground beef to flank steak, or thick-cut hickory-smoked bacon and Italian sausages, Mecox Bay Dairy offers the best in antibiotic-free meats that are all raised on-site. Their pigs are 100 percent Berkshire heritage breed, and fed whey, a byproduct of cheese production.

Originally a potato farm, the Ludlow family transitioned to a dairy operation in 2001. At the time, Art Ludlow, a 4th generation Bridgehampton farmer, realized that as less and less farmland was available to cultivate on the East End, value-add products like cheese offered a higher profit-per-acre than wholesale crops. Although Ludlow was a pioneer with his dairy milk at the time, in some ways, it was a return to the past for the South Fork. In the 1950s, there were over 40 operational dairies in East Hampton Town alone. By the 1960s, many had shuttered thanks to regulation of the industry, through the USDA push for pasteurization of milk.

To ring in the new digs, over 200 neighbors, friends and family stopped by on a sunny July Sunday. The Ludlows manned a grill, while visitors were invited to check out the stand. Thanks to well-crafted windows that offer views of aging wheeled cheeses, customers can even a peep into the production process. Art said that he was very happy with the turnout and is happy to invite neighbors and friends to the next step for Mecox Bay Dairy.