Harvest East End Returns to its Roots This Saturday in Riverhead

Celebrate local wine and the people who make it this Saturday with the Long Island Wine Council. 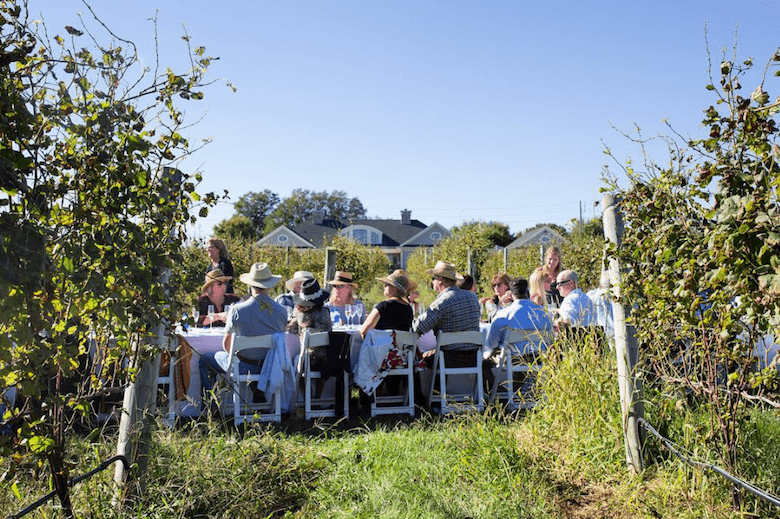 There’s just a few days left before Long Island winemakers hold their biggest party of the year, and the looming question is: How will this year’s party—the first one staged by the region’s winemakers on their own—be different?

The answer got me a little choked up.

The goal is still to throw as mean a party as ever. And you’ll still have a chance to taste close to a hundred Long Island wines paired with hors d’oeuvres featuring local ingredients.

But because the winemakers are more deeply involved than ever, this year’s event will also be the first collective, industry tribute to the legends who helped create Long Island Wine Country after Louisa and Alex Hargrave planted the area’s first commercial vineyard in 1973.

Dig into the history a little, and you find an amazing cast of people who came from many walks of life.

Some were wealthy entrepreneurs, such as Christian Wölffer, the German-born entrepreneur behind Wölffer Estate Vineyard. Some came from poorer backgrounds, such as Dr. Herodotus Damianos, a son of Greek immigrants who grew up in Hell’s Kitchen before starting Pindar Vineyards.

They didn’t flaunt their titles, which included that of an Italian prince (Marco Borghese), and they didn’t dwell on their achievements, which included flying commercial jets (Dave Mudd), saving horses (Sam Rubin), leading a family empire that’s put baked treats on American tables for more than 100 years (Robert Entenmann), and designing the posters for the 1968 Summer Olympics in Mexico (Robert Pellegrini).

The site of this year's Harvest East End Event! For tickets, see link in bio or visit liwines.com #LICharacter

They took risks when no one knew what kinds of grapes could grow on Long Island, and they survived the skepticism and jokes about Long Island wine to create an industry that provides more than 4,000 jobs and draws more than a million tourists a year to the East End.

Their legacy shaped the life of Juan E. Micieli-Martinez, whose family emigrated from Mexico.

After graduating from college with a double major in biology and psychology, Micieli-Martinez took a job at Pellegrini Vineyards. He moved onto other positions, including a role with the Houghton Winery in Western Australia, before becoming Head Winemaker at Martha Clara Vineyards, where he met his future wife, a sommelier.

“This is a celebration of family for me,” said Micieli-Martinez, who chairs this year’s Harvest East End event. “This is about the wine and the people who created the Long Island wine community. Were it not for them, I would not be where I am. I would not have met my wife, and I would not have my son. And I am just one of many stories.”

Besides an inside view of Long Island’s wine heritage, this year’s party offers an added perk.

Prior events, organized by Dan’s Papers, were generally outdoors. This year, the party will be in an air-conditioned space on Martha Clara Vineyards’ 200-acre property overlooking the vineyards and paddocks where the Entenmann family holds their Percheron and Clydesdale horses.

Micieli-Martinez expects tickets to sell out.

“This is our big event,” he said. “Everybody steps it up and brings their top wines.”