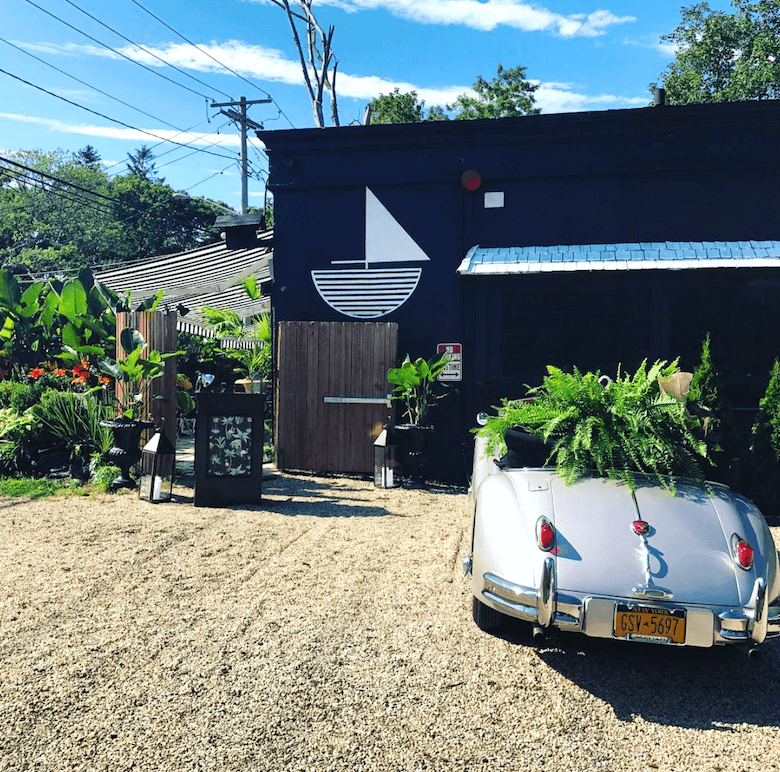 “We’re not trying to reinvent the wheel,” Harbor East owner James Willis tells me as he ushers me into a quiet, not-yet-open restaurant. From the side entrance, I walk past privacy landscaping: Japanese banana leaves to match the banana leaf-upholstered banquette cushions. The dining room is open, floors painted Hamptons white. It reminds me, not unintentionally, of a restaurant that has survived many iterations, the former Moby’s on Pantigo Road on the East Hampton/Amagansett border. That restaurant has since been taken over by the accomplished culinary minds from New York City’s Eleven Madison Park, but last summer, and the two summers before that, Moby’s was a Hampton’s hot spot, frequented by the must-see-and-be-seen crowd. Willis knows the Moby’s crew well—they’re friends and, like him, they, too, hail from Australia.

But, after 12 years on this side of the world, Willis considers himself a New Yorker through and through. Following a notable career in the city, where he spearheaded Ruby’s Café, Kingswood, and Brinkley’s, Willis migrated east. He now owns a home in Amagansett. In 2014, he opened Harbor in Montauk, which closed following the 2015 season (the Grey Lady now occupies that space). It became, Willis tells me, a nightclub that exceeded its own expectations. “It wasn’t what we wanted to do.” What he wanted to do, it turns out, was serve sexy, fun, post-beach food in a casual, chic atmosphere to Hamptons visitors and locals alike, to people who prefer a tablecloth-less environment. This is let-your-hair-down East Hampton Springs, after all.

Harbor East, then, is a reinvention—a cool, summertime spot in the East Hampton space that used to house Philippe and, before that, Sienna. Gone are the dark wood accents and the so-hip-it-hurts lighting. The dining room is, for all intents and purposes, an extended lanai, where the savvy can enjoy rosé with the doors open. Next door, a music venue—a “blues club,” Willis tells me—will be supplying live tunes nightly, starting at 8 p.m. It’s a place for dancing, for people of all ages.

Food is purposeful, with a farm-to-table bent. The restaurant sources its produce from Amagansett’s heavy hitter, Balsam Farms. Proteins are local (when available), organic, and free-range, with an emphasis on seafood. “We’re putting good flavors together,” Chef Sebastian Royo tells me. It’s “the way it’s supposed to be.”

I take Royo at his word. The chef boasts an impressive résumé, having cooked at such New York institutions as Eleven Madison Park, Per Sé, and La Esquina. His menu reads like a locavore’s dream: Montauk Pearl oysters with mignonette; local burrata with heirloom tomatoes; sea scallops with summer legumes. An alum of the esteemed Mary’s Fish Camp, Royo brings his own (affordable, at $24) lobster roll to the table, too. The slim-not-anemic menu will change according to market availability. Like all great concepts, Harbor East will go where the seasons take it.

Willis has traveled the world and brings an international perspective to his East End food and drink. This is “finish your day at the beach food,” he says, referencing the beaches of his travels. He surfs Indonesian breaks in the off-season and wants to replicate the easy, fun vibe of that lifestyle. “I know what people want.”

If he means clean, delicious food, served without pretense, he’s right; that’s what people want. As for me, I want oysters, all the time, a fresh reminder of where I am and where I’m headed. I know of only one Hamptons restaurant that serves oysters on the half shell at $1 a pop, and I’m lucky enough to be a stone’s throw away from that restaurant, Bell & Anchor, which honors the deal every Sunday, year round. Add to that small list Harbor East, which will be serving happy hour oysters for that same respectable price every Thursday, Friday, and Sunday from 5 to 7 p.m. Slurp your bivalves with a glass of the private label Harbor East rosé, a Provençal-style blend of Grenache, Syrah, and Cabernet Sauvignon. The wine is light pink, the way it should be in the Hamptons.

An antique Jaguar, parked in the driveway and resplendent in the June sunshine, offers a glimpse of where Harbor East is headed. Get in while you still can. “We’re having fun,” Willis says of his most recent enterprise, and, after an afternoon spent on the lanai, I can’t quite disagree.

Harbor East is open for dinner Thursday through Sunday, 5 to 11 p.m. Reservations recommended.