Amagansett Farmers Market is a Celebration of Farming and Friendship

The new market is as beautiful as the friendship—and farm—that brought it to life. 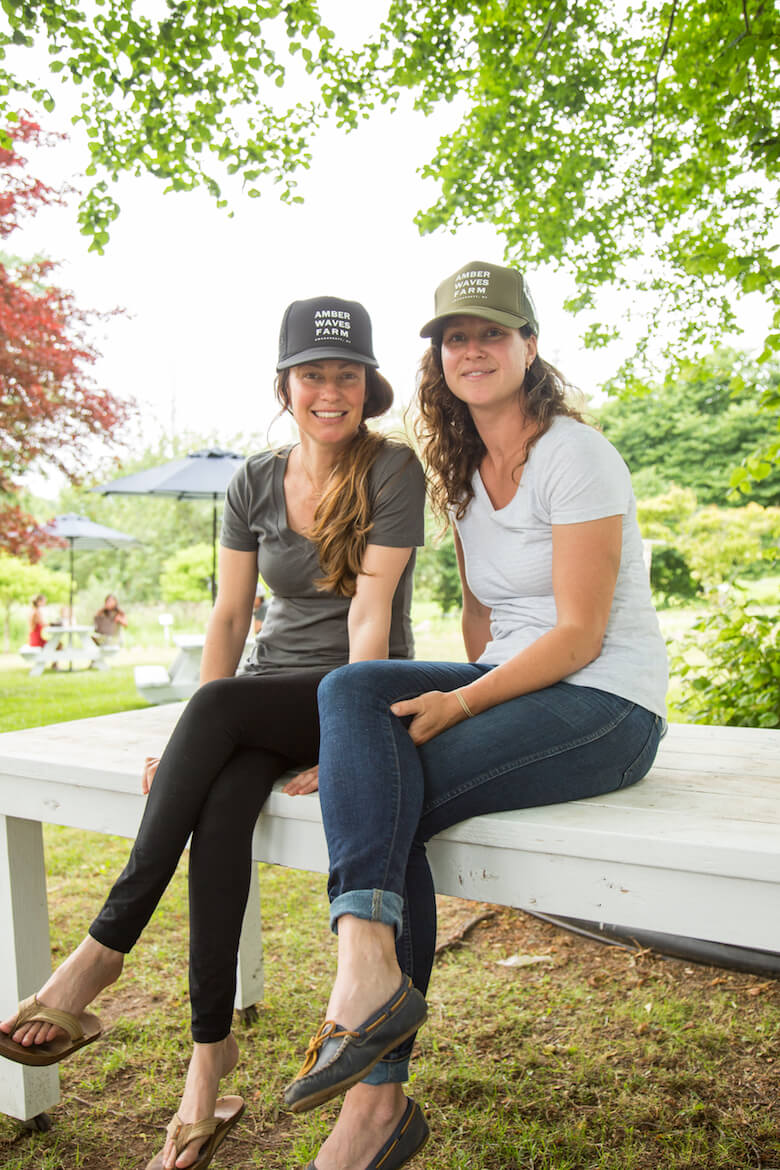 Farmers and best friends Amanda Merrow and Katie Baldwin embody the old adage, “If you love your job you never work a day in your life.” Lucky for us.

“We’re really excited the farmstand is reunited with the farmland,” sighed Amanda Merrow, as if a weight had been lifted off her shoulders.

Seven years ago, I attended the first community gathering at Amber Waves Farm. Merrow and Katie Baldwin had leased farmland just behind the Amagansett Farmers Market from Peconic Land Trust, not far from Quail Hill Farm, where the two women met as apprentices a year earlier.

To celebrate Amber Waves’ first wheat harvest, the women gave field tours and gathered their friends. The theme was “Bread, Beer, and Berries.” 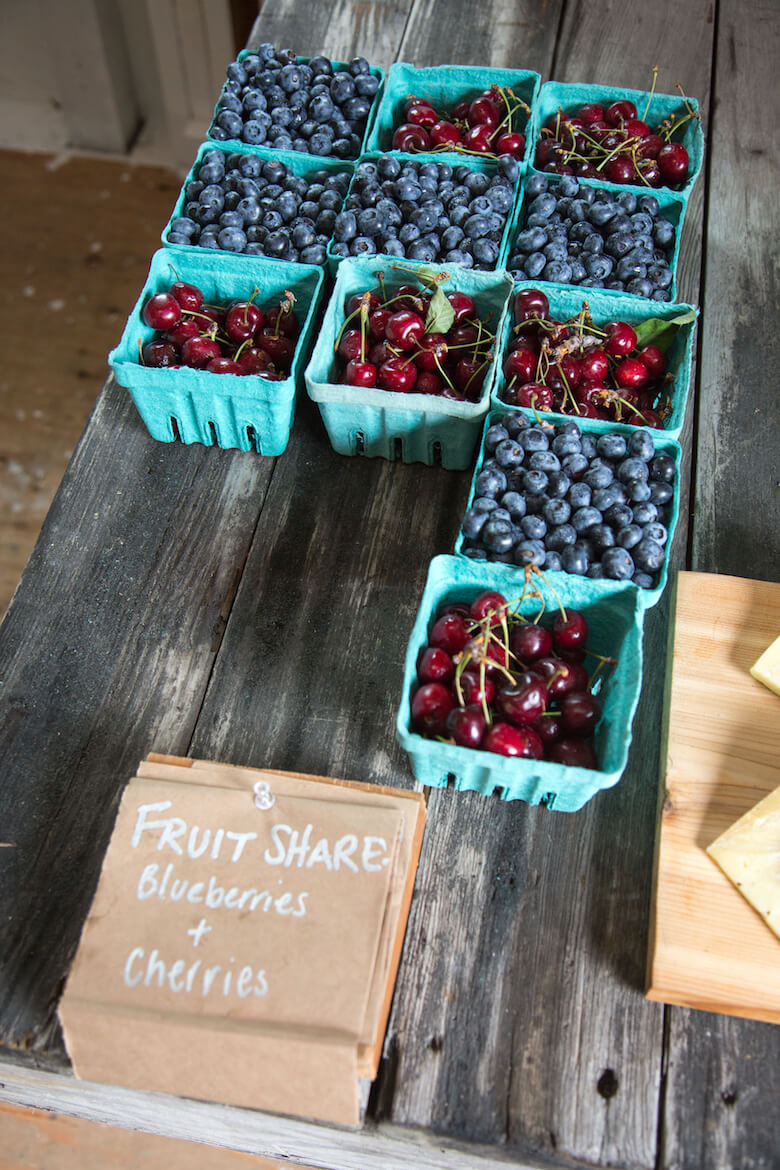 At the time, the New York City bakery Eli Zabar’s leased the Amagansett Farmers Market from East Hampton Town. Carissa Waechter, who baked breads for the company before starting Carissa’s Breads, was there sharing samples of the first loaves she baked from Amber Waves wheat.

Farmer Steve Eaton turned people onto wheatberry salad and Vaughan Cutillo and Joe Sullivan served wheat beer, flavored with strawberries from the farm, one of the first brews from Montauk Brew Company.

I can still taste the excitement in the air and the freshness of the beer. The most exciting thing to me, is witnessing how much Amber Waves, Montauk Brewing Company (now celebrating five years at their tasting room in Montauk) and Carissa’s Breads have grown.

“We met Carissa on the back porch in 2009 and we’d talk about this,” Merrow told me inside the market just before the big opening on Memorial Day weekend. 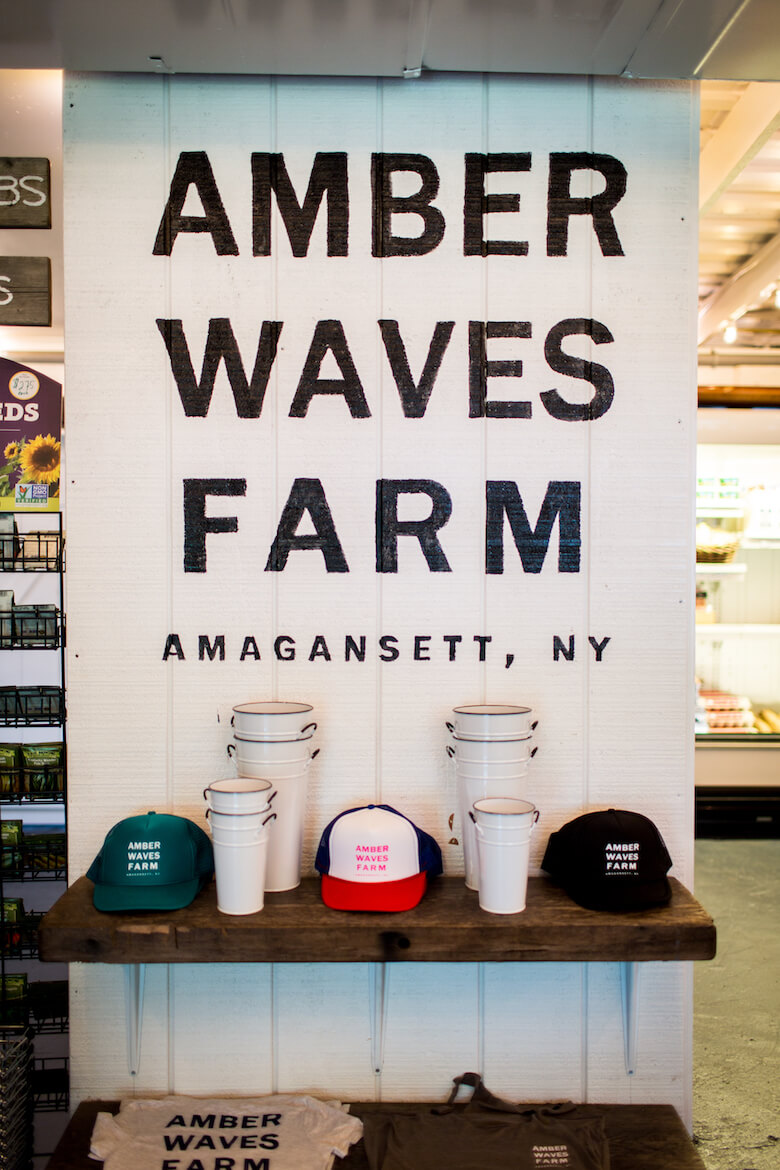 “We were lured up front by the smell of bread and Carissa was lured by the field vistas,” said Merrow.

Simultaneously, Amber Waves and Waechter are opening their first brick and mortar shops. “The process took a lot of time and patience and thoughtful work between the town and Peconic Land Trust,” said Merrow about going from lessees to owners in nine seasons. “We’re so thrilled with the outcome.”

“Katie and I are not from here but we live here now, so it feels like a family farm,” Merrow continued. “We now have a feeling of permanence.” 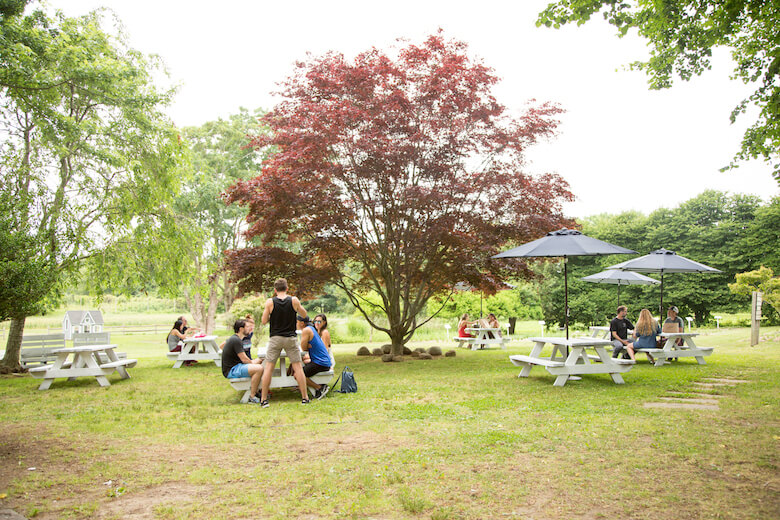 Struk wrote about the cake in the cookbook: “The First Presbyterian Church of Amagansett held their Annual Fair each summer across the street. During my second season which was the summer of 1956, I received a telephone call from Kenny Mulford. ‘Pat, we have a few things left over from our white elephant sale. Do you want a stove?’ Kenny brought it over – it was ancient, white enamel, gas stove with a broken door. I had it hooked up, using a chair to keep the oven door closed. I baked the first cake I sold in that oven! The recipe above is a slightly more improved version of that first cake.” 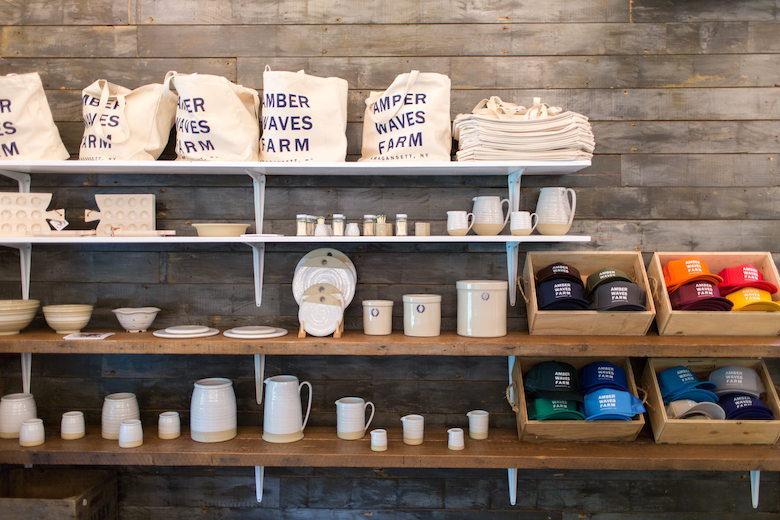 The gesture was a kind one and reinforced the idea that the family farm stand is getting back to basics. The farm transferred 10,000 vegetable seedlings to sell at the market and is focusing on vegetable production this summer so crates are filled with chemical-free leafy greens, tomatoes, zucchini, cucumbers, onions and herbs to everyone. In the past, only CSA members or someone who had the luxury of going to the Montauk Farmers Market on Thursday mornings could purchase the farm’s produce.

“We never want food to be exclusionary,” said Merrow. “That’s why we donate salad to Amagansett School every week.” 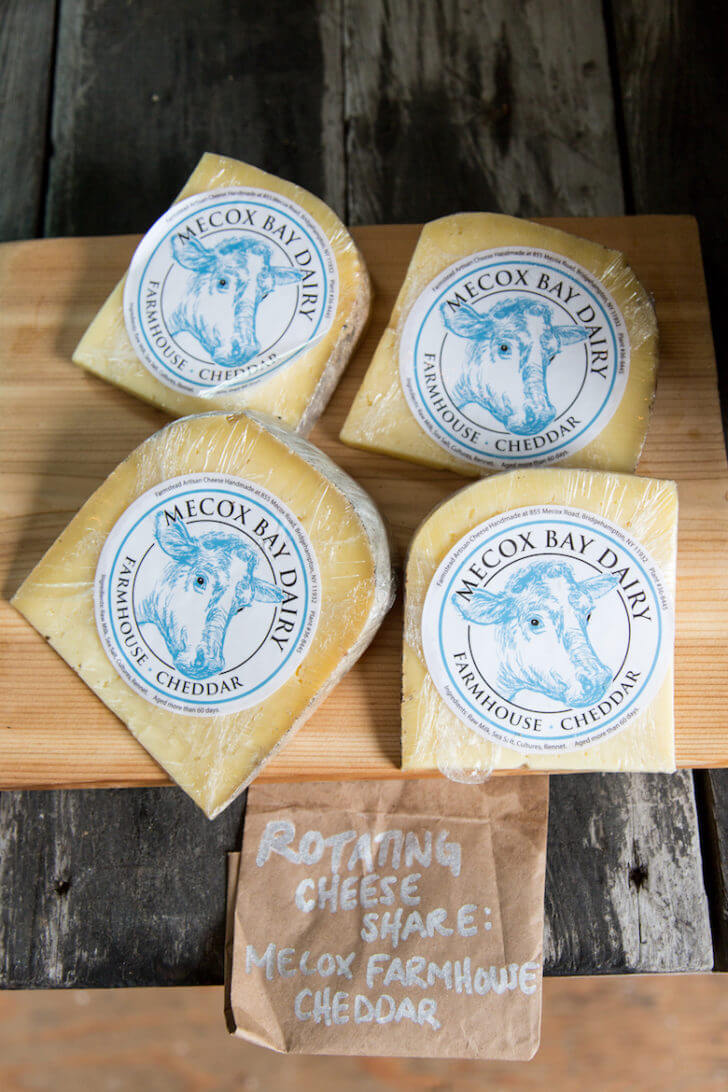 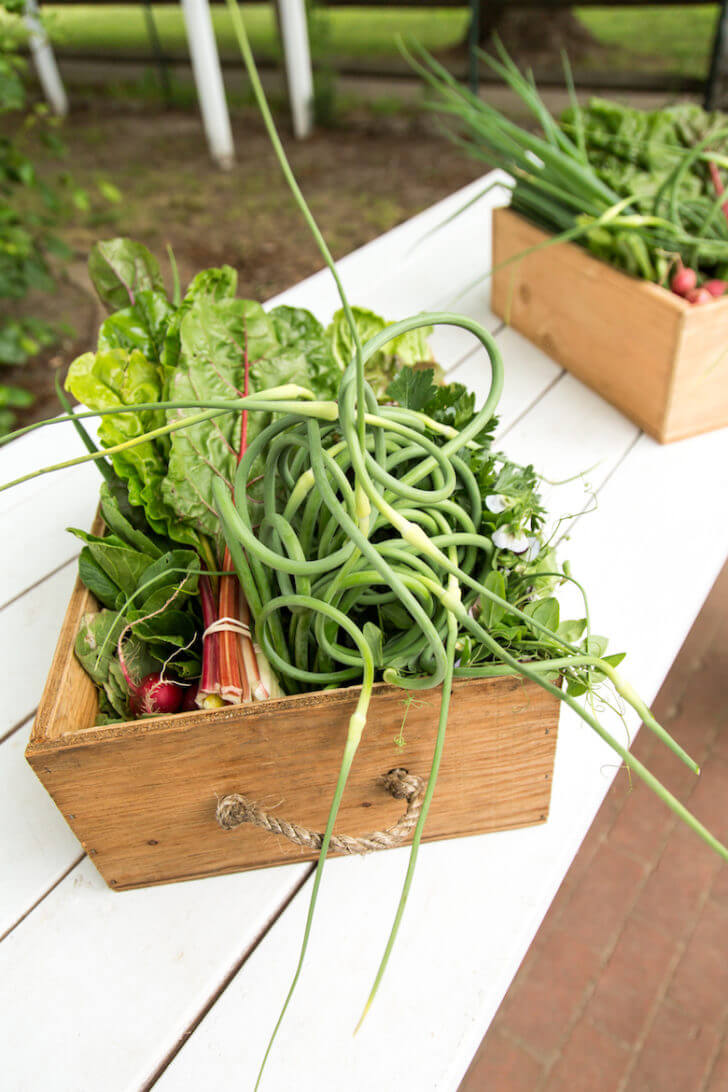 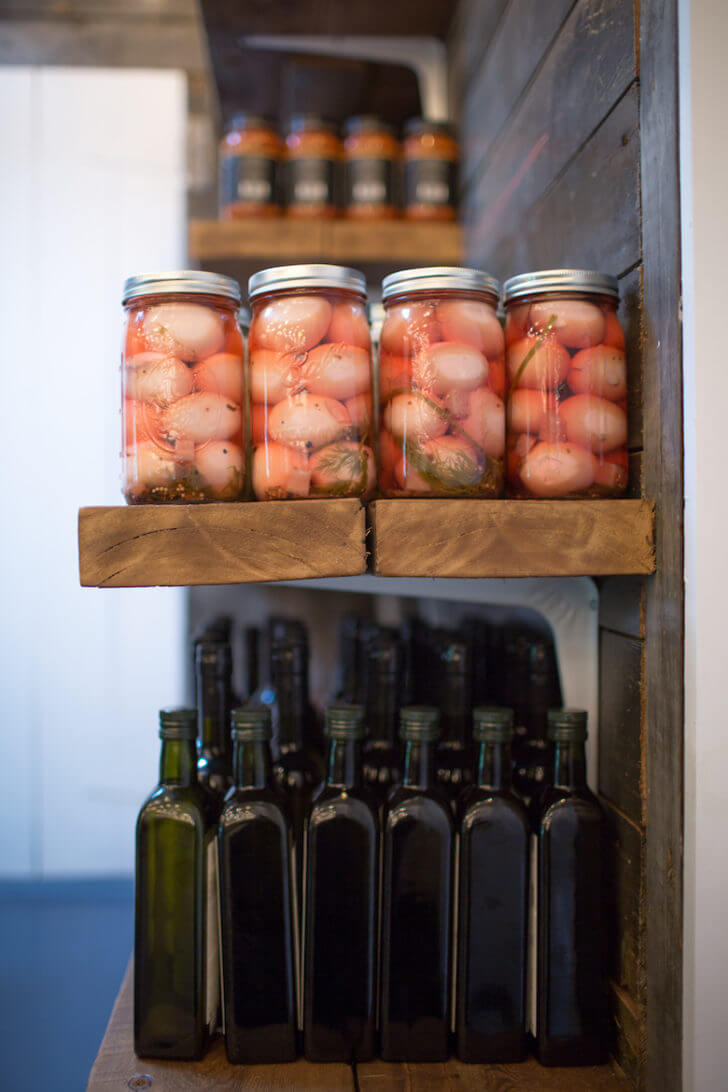 “NoFo RoCo for short,” said market manager Juliana Nash. “I love their coffee.” There’s an affinity with NoFo RoCo since owners Jennilee Morris and Jess Dunne started working together around the same time as Merrow and Baldwin.

“Their cold brew is served from kegs and they even use coffee ice cubes, which is a special touch,” said Nash, who has worked at Provisions and Mary’s Marvelous, and hired Merrow as a babysitter in years past.

“The transition in terms of management of the farmstand is happy and upbeat,” said Merrow.
“Positive reinforcement is free.”

“The best advice we got came from Ina Garten, who had a share in our first CSA. ‘You can teach anyone about selling coffee or cheese but you can’t teach people how to have a positive attitude,’” she said. 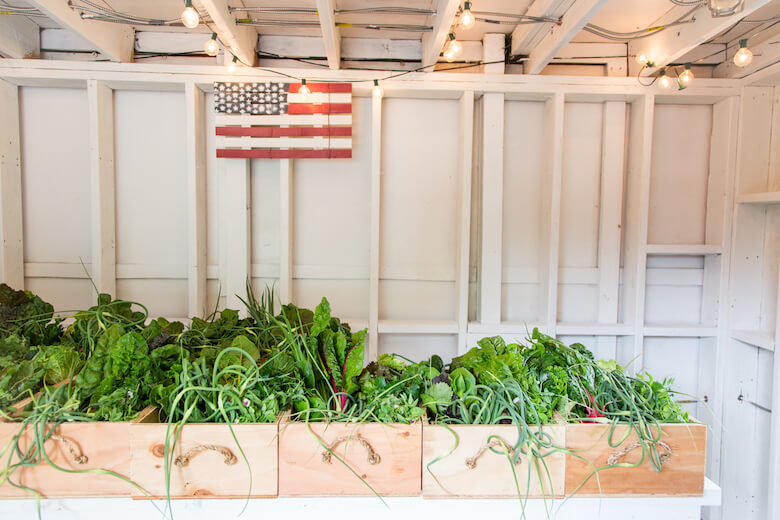 Since those early days, the farmers have appeared on Garten’s outrageously popular television show, the Barefoot Contessa, more than once. Their CSA memberships have grown from 18 to 160 and farming acreage has increased exponentially.

This year, the farm is taking the summer off from growing wheat, their original crop, implementing a long term plan to rotate crops. Deer pressure had “gotten crazy,” and it was a busy year for the farmers both professionally and personally.

Baldwin, normally by Merrow’s side, was due to have her baby girl Beatrice, any day, and was home resting. Her fiancé Dan Michael came into the market, however, for snacks.

“She never eats that,” laughed Merrow.

Michael, an architect, helped with the farm stand’s new design. The structure hasn’t changed but the interior is simplified, with less retail space and no kitchen. Thankfully, a working kitchen has not been ruled out for the future. 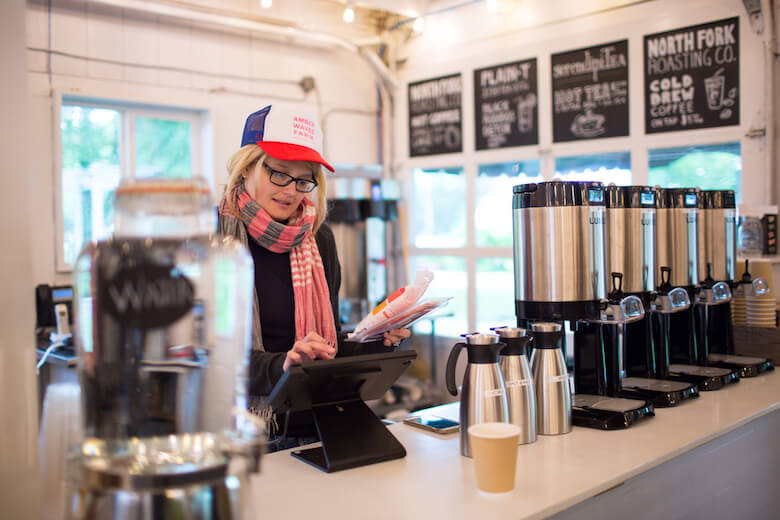 “Katie is the big picture dreamer. We play off each other very well,” Merrow said. “It’s why our partnership works so well.”

A delivery of prepared foods from Harbor Market in Sag Harbor, arrives including salumi sandwiches and chia pudding. “It’s fun being in food and forming really cool partnerships with other food businesses and other farms,” said Merrow. “We would love to carry Balsam Farm’s world famous corn and Jen Halsey’s apples from Milk Pail.”

In order for the market to be successful, the community must support it. Love it because you can pick up groceries, gifts (Montauk Candle Co., 8 Knots beach towels) or take weekend workshops; Flower Arranging with Molly Culver, Pies and Dyes with Hilary Leff, Jam Out with Nicole Rustch and Preserving the Harvest with Amber Waves are all happening in August.

“I can’t believe we’re allowed to do this, work with your best friend,” said Merrow. “We always say, ‘One and one equals three,’ because we both feel better as a team.” 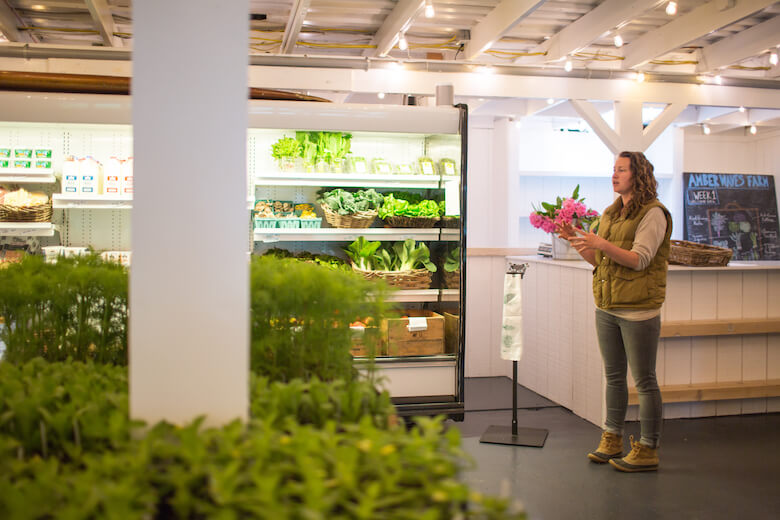 “This farm is a celebration of our friendship,” she said. “The passion of farm is at the center of the farmstand.”

A few weeks later, Baldwin is back, running errands around the market while Michael totes baby Beatrice, introducing her to CSA members. In the first few weeks of raising a new life, the farmer is in awe and overwhelmed with joy. You can tell because she is literally glowing. “I think farming for a decade has prepared me well to be a mother,” Baldwin said. “Our days are filled with both nurture and nature.”

The next big step will be a farm wedding in the fall, after winter wheat has been planted for next year’s harvest.