Welcoming the Stranger with Sam Sifton 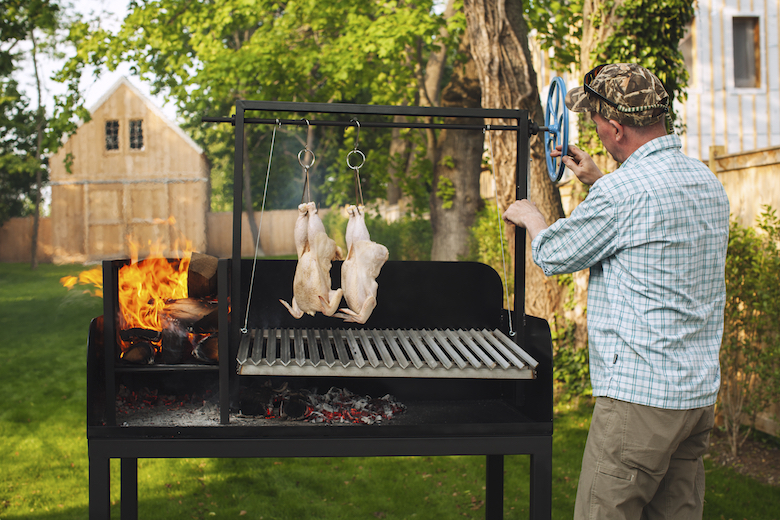 “Should I go get clams? I mean, I don’t want to piss off Sam,” Brendan McCarthy asks me across the fishing rods that stretch into the front of his hatchback. “He likes to plan out his menu,” he clarifies as we pull out of the Greenport train station. Brendan’s grizzled and dusty after working all night putting the finishing welds on the parrilla grill that we’re going to asado barbecue on tonight. Eager to get cooking, we forgo the clams and head straight to Sam’s.

As food editor for the New York Times, Sam Sifton holds among the most influential roles in the food world yet plays the of-the-people card like no other. Brendan and I enter the backyard through the side fence gate and Sam greets me like a long lost friend, which I come to discover is part of a larger pattern of “welcoming the stranger.”

In fact, this type of welcoming seems to be the role of this Greenport home. It’s an old ship-builder’s house like others on the block—traditional seaport houses that started out small but grew deeper and deeper into the backyard with multiple additions built on over the years to accommodate a growing shipbuilding workforce. The Sifton home-away-from-their-Brooklyn-home similarly takes people in. Starting with Sam and wife Tina Fallon, their two kids, and in the summertime, Tina’s folks, Brendan and whatever other guests come to town, which tonight is me. And then all those that just stop by. 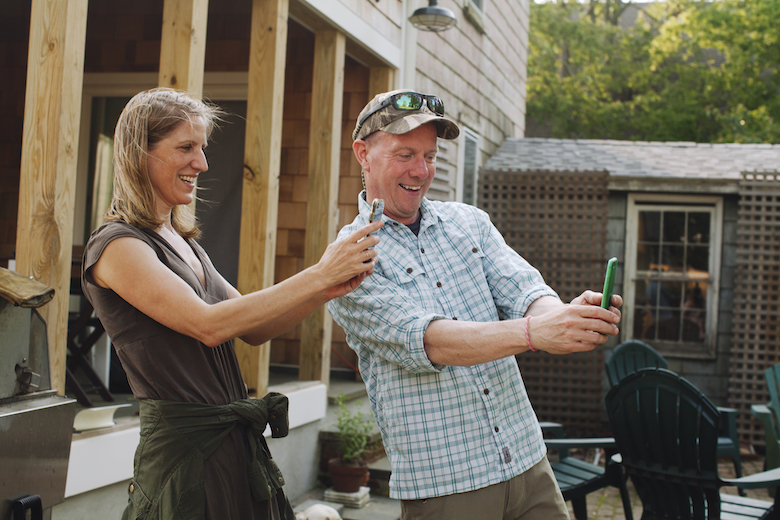 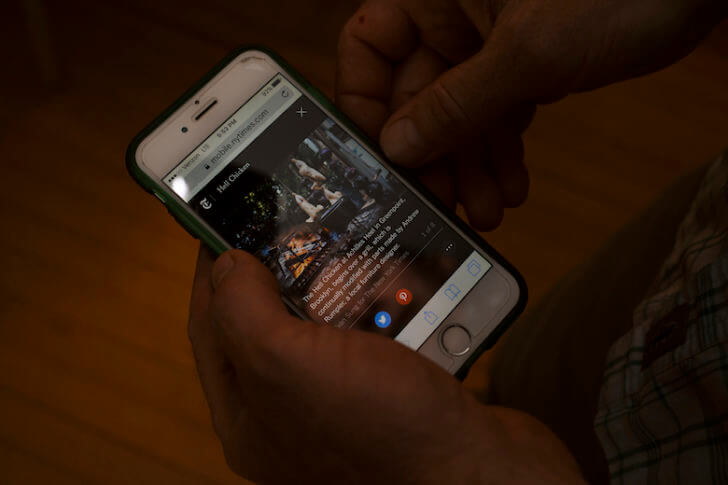 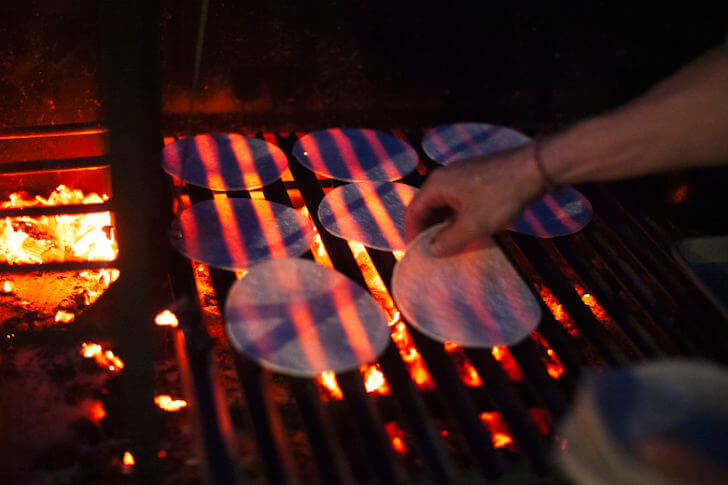 It’s still sunny out just after five on a Saturday evening and a smattering of people are in the yard. A fisherman sits legs dangling from the porch while a little girl does cartwheels on the remarkably green lawn, her father nearby. A yellow Lab named Molly wanders in and out of the house. “This is how we roll here,” says Sam. “We are working on a new grill and trying some stuff out, but the whole idea of cooking here on Saturday nights in Greenport is people come over. Who else is going to be here tonight? People will drop by. You know, eccentric Greenporters, friends, locals.”

He takes me into the kitchen to lay out the menu for the evening. Brendan was right. Sam is a man with a plan—though he insists he’s just a “passionate amateur at work.” Tonight’s feature: Hell Chicken.

“I’m going to hang these birds [two chickens] from the rack, then I’m going to transfer them after they get some smoke on them into here,” Sam points to a stunning Blanc Creatives hand-forged steel roaster. Its blackness shimmers with blues and greens and we are stopped by its beauty. “I fell in love with them at Stone Barns. I bought a couple. I love them,” he confides while I nod in understanding. The glorious pan will be used to braise the birds in butter and chicken stock, “and then I’m going to finish them on the grill to get ’em crispy,” Sam says, eyes sparkling with the vision of it. 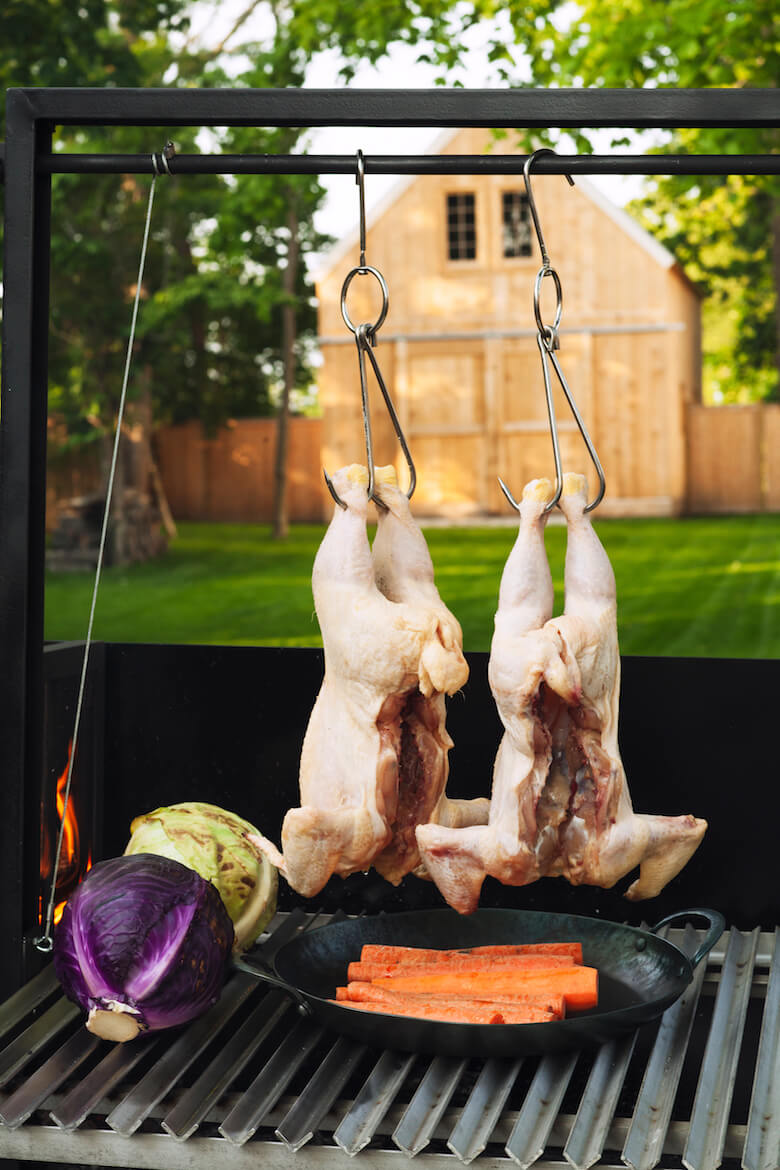 “I’m going to hang these birds [two chickens] from the rack,” says Sam.

Still, the star of the night will be the birds. Sam’s hacking the recipe from a photo of a New York Times story on a Hell Chicken dish at the bar Achilles Heel in Greenpoint, Brooklyn. “I’ve never been there, but I assigned a story there, we ran it in the paper and I’ve been obsessed with it ever since,” he says.

He continues his preparations, adding, “I want to be absolutely clear. I am stealing this from these dudes. But here’s the thing. If New York Times Cooking is successful, like if what we do is a smart thing, it’s smart because the journalism that we’re doing makes people want to try stuff. And when I read the story I was like, ‘I want to try that at home, I want to figure out how to do that.’ So that’s what I’m trying to do.” 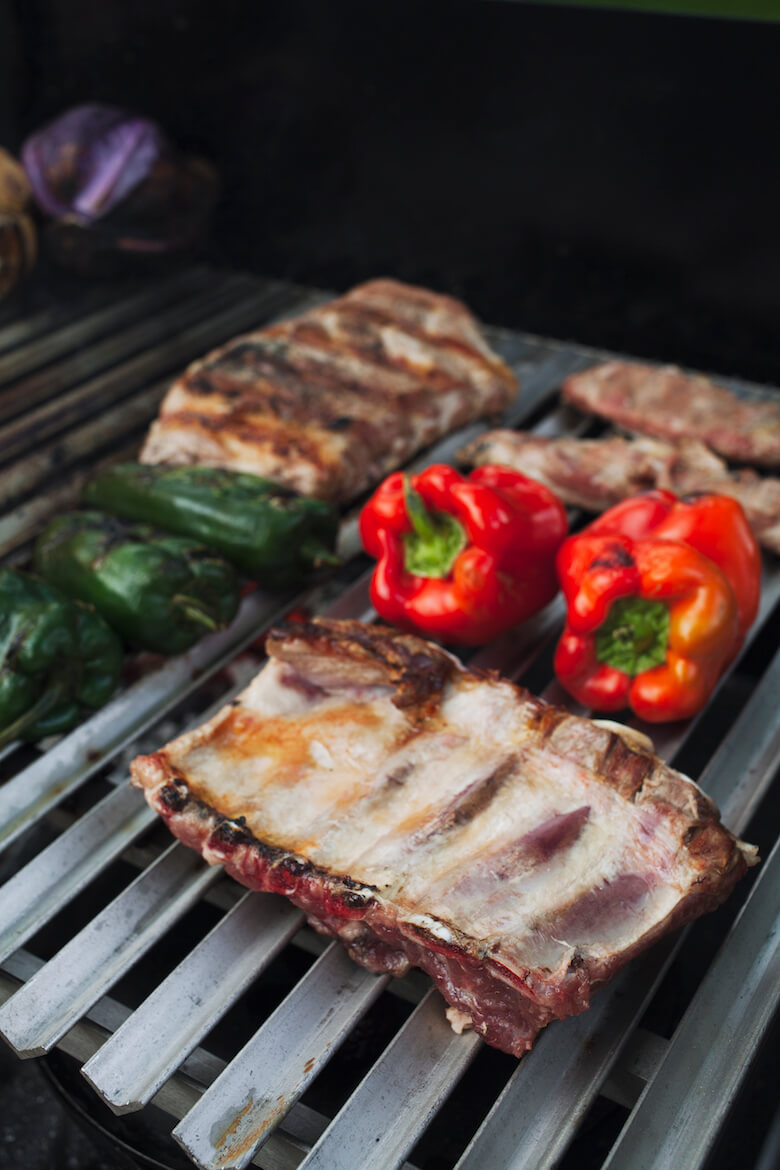 Also on the menu tonight: grilled pork ribs on the grill basted in a homemade barbecue sauce of Korean hot pepper sauce gochujang, a little water, soy and fish sauce.

We head outside in full meta mode to tell the story of Sam hacking the story he assigned to be told.

A fire is now blazing for our dinner. For the uninitiated, the process works like this: The grill itself is called a “parrilla” (pronounced par-ee-jah). Its left side has a tower-like area called the “bresaro,” which holds the burning wood fire. The resulting hot coals drop to the bottom and are pushed to the right beneath the grill grate, made up of v-shaped metal bars that channel vital barbecue juices away from the coals to be put to better use. A flywheel at top right of the parrilla can raise and lower the grate to gather more or less heat as desired. It’s an “asado” style of cooking with fire made wildly popular by Argentinian chef Francis Mallmann.

It’s Sam’s first time using the grill but you wouldn’t know it to look at it. Chickens on hooks hang from a crossbar above the fire “just picking up some smoke” while the grill is laden with ribs, cabbage, carrots, peppers and onions. The fire burns brightly as darkness falls and more visitors stop by. In addition to fishermen, there are many journalists among us. Sam notes, “People who are journalists often have problems with authority and sometimes they’re a little A.D.D., and for whatever reason, that is a trait that you see a lot in Greenport.” It is, he adds, an old bootlegging location. 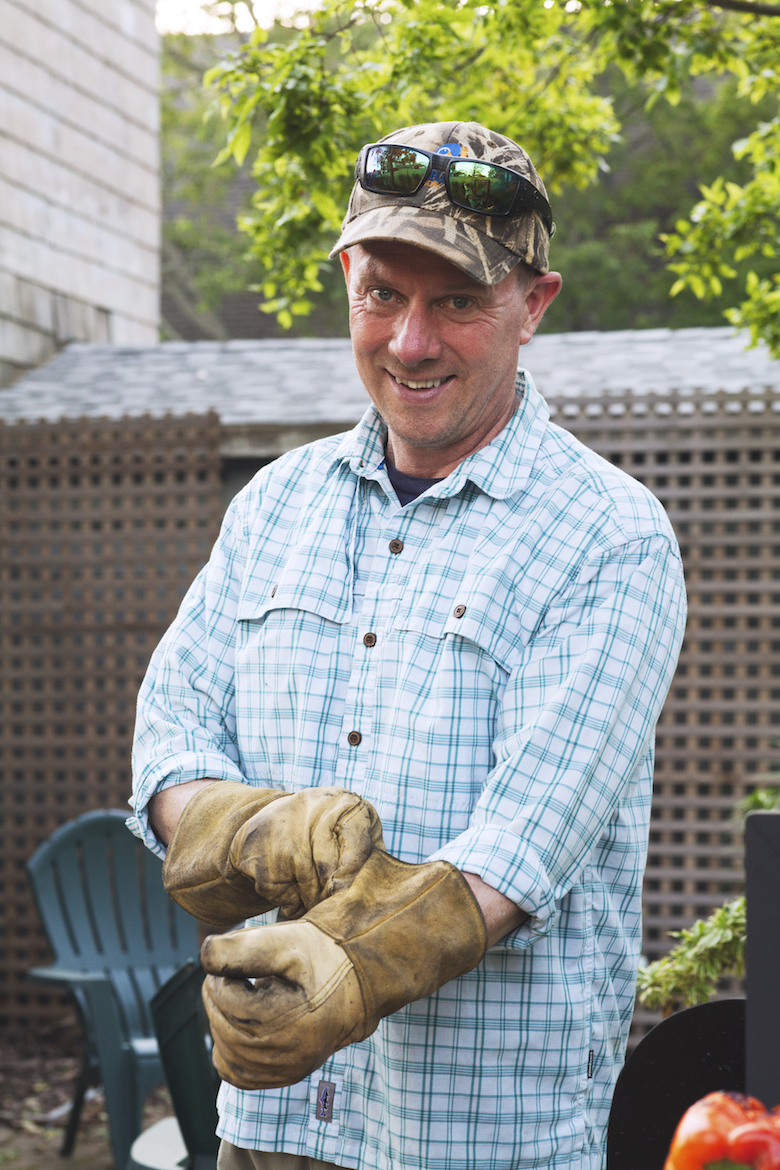 It’s Sam’s first time using the grill but you wouldn’t know it to look at it.

I’m advised to go interview the eccentric boater with the mismatched shoes. It’s David Berson, who since 1999 has been running The Glory, “the only solar-charged-electric-powered boat certified by the Coast Guard.” A one-time captain of the schooner Pioneer in Manhattan’s South Street Seaport, he had Sam as a little boy on his crew. He says of Sam: “He’s one in a million, man. Definitely. And even as a boy, he was one in a million.”

Sam’s over at the grill tending the fire with welding gloves as oven mitts as Brendan looks on in mock consternation. “I’m going to go make this into a dinner,” says Sam, disappearing into the kitchen with the chicken. He reappears moments later.

I ask him if he does this every Saturday night. “Every weekend,” he answers. “I mean, it doesn’t matter. Every night could be a Saturday night or a Sunday night, you know?” and heads back to the kitchen with an armful of grilled vegetables. 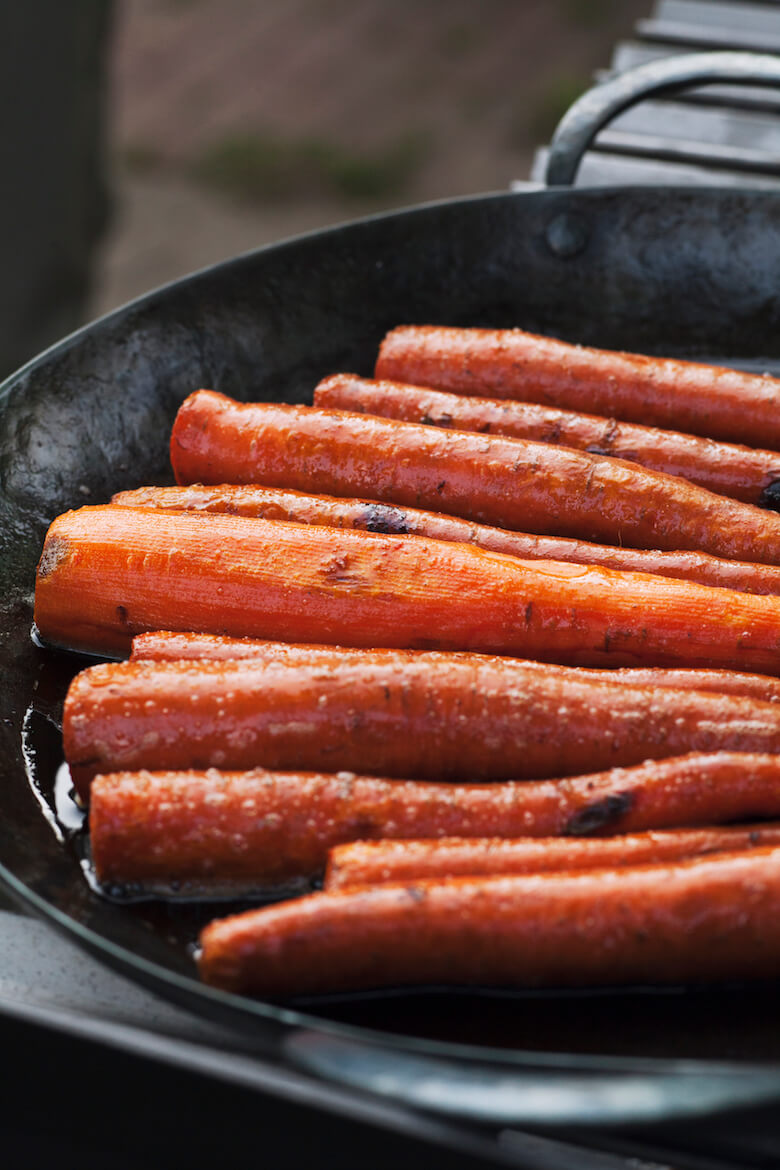 “I think this is going to be good, too, you guys. Yeah, boy,” he exults, putting the hot vegetable slaw together.

Tina walks in. “Watcha got?”

“A little crema for my slaw,” Sam replies. “This smells so good. This is going to be sick. Wow.” Then tells us, “I didn’t know how that was going to work. I didn’t steal this from those guys. I made this one up, but I’m proud of it. Like if the other stuff is good, that’s a testament to those guys, but if this is good, that’s a testament to me. That’s my win. I get one win, I hope.”

Tina tastes the slaw. “Oh my God. Oh my God. That’s really good.” Other tasters appear, concur and Sam gets his win. It also becomes apparent that the risk factor may play a part in it being a real win. 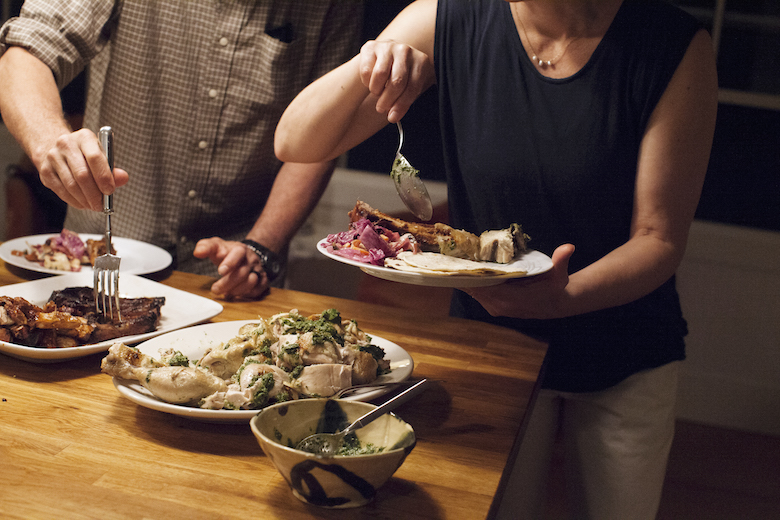 new waters. since no one present has ever actually had the hell Chicken we’re hacking, it’s hard to say how close we got, but without doubt the feasters delight in their fare. 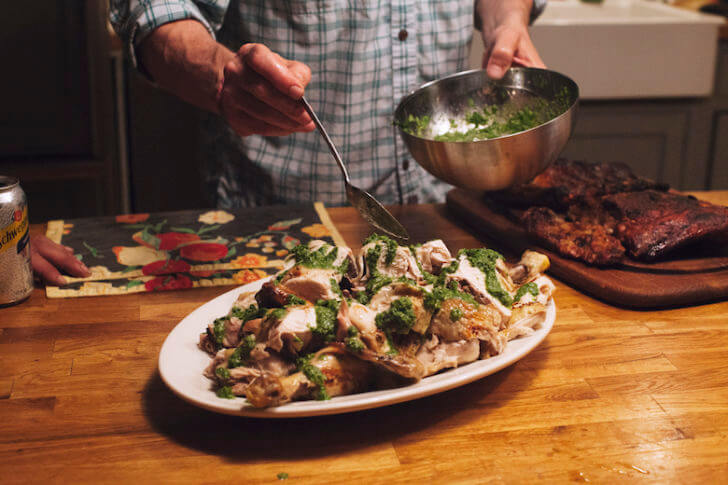 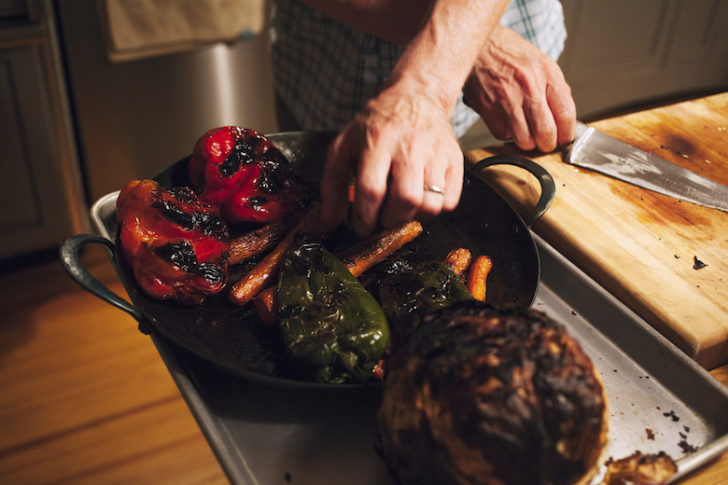 The finished chicken arrives on the cutting board. “It looks pretty good,” he observes. “I’m usually convinced at this point that I’ve made a big mistake with my life and my career.” He tastes it. “It’s a totally different thing. It doesn’t taste to me like barbecued chicken, nor does it taste like grilled chicken or braised chicken; it tastes like a new thing, like we’re in new waters.”

Everyone’s seated at dinner, both inside and outdoors, as Sam slips out back one last time. He lays out the tortillas like a card dealer onto the v-grate above the still-glowing embers. “This isn’t a taco situation,” he assures me. But it is one of his tricks for stretching out a meal when company unexpectedly expands. Other tricks include plenty of back up vegetables and never, ever portioned-out meals.

The evening winds down, guests and family departing or heading to bed. Sam returns from walking Molly. “I think I’m going to set up some waffles for breakfast,” he tells me and Brendan. He keeps the sourdough starter in the fridge. I let him know I’m leaving first thing in the morning. “We’ll get you a waffle,” Sam assures me and heads off to sleep.