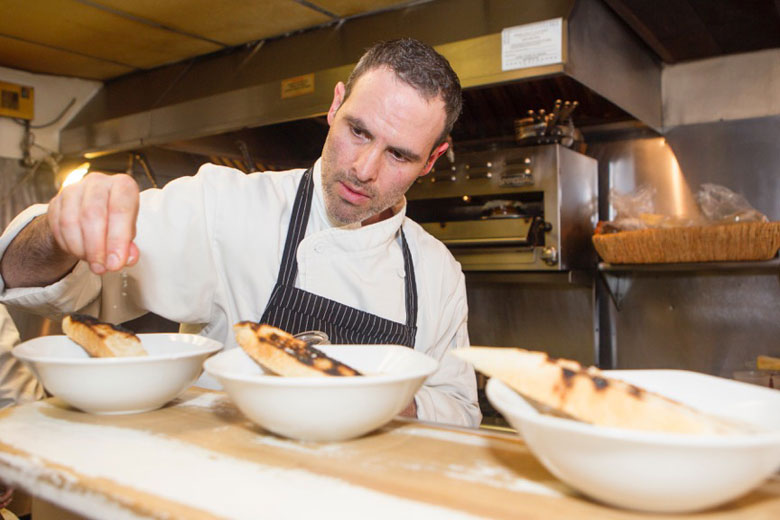 The newly renovated Bruce & Son in Greenport has a chef’s counter in the back with a great view of the open kitchen. There you’ll often find Scott Bollman, son of eponymous Bruce Bollman (now retired), carefully plating high-end brunch dishes all day long. At night, you may find him cooking along guest chefs Taylor Knapp of PawPaw or Matty Bennet of the Lucky Bee, or maybe even sitting down to enjoy a meal at one of these pop-ups.

PawPaw is in its third year of renting the Bruce & Son space on Saturday nights and turning it into a multi-course, prix fixe meal that features locally farmed and foraged ingredients. Knapp originally was going to hold the pop-up restaurant down the street at Aldo’s Coffee Company. Bollman and his wife, Kassata, had reservations, and when they received an email canceling the event because the space wasn’t going to work out, they offered their space instead. PawPaw has been so popular that they’re booked through this month, but they’ll announce their dates for August and September soon, and they occasionally have last-minute openings that they announce on Facebook and Instagram. 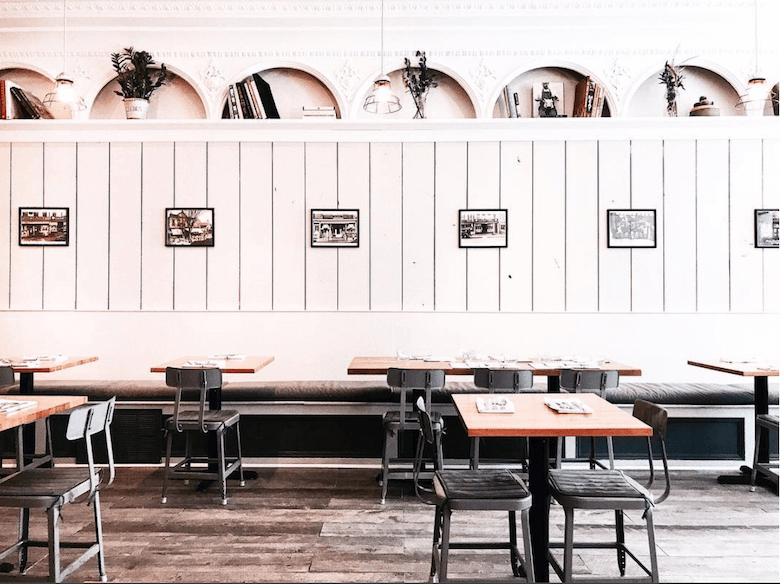 The Lucky Bee, a restaurant in Manhattan that started a pop-up restaurant on weekends in Greenport last summer, is also renting Bruce and Son’s space to serve dinner on Friday nights. Their inaugural dinner in the restaurant was on Memorial Day weekend, and pop-ups will start up again in August, when Bruce & Son will have a full liquor license that they can use. Chef Matty Bennet cooks spicy, Southeast Asian dishes utilizing fresh, local seafood sourced from the East End.

“Chef Matty and I love having the Lucky Bee pop-ups at Bruce & Son,” says co-owner Rupert Noffs.
“Kassata and Scott are passionate about what they do and the renovations at the space are amazing. We come from a small town in Australia, just by the beach and it really reminds us of being back home!”

The Bollmans have to click with whomever they rent their space to.

“They represent us,” Scott says. “Our customers often eat at both. We push for the guest chefs to source as much locally as possible. We enjoy it, too, cooking with them, and experiencing new cuisines and techniques.”

Guests spilling out onto the streets at our Greenport pop-up at @bruce_and_son. Come sit in the sun & have a rosé and curry! The sunny side of the street. 💕🐝🌴 BOOKINGS: reservations@luckybeenyc.com #thelastlaugh #luckybeexbruceandson

The pop-ups are an opportunity for New York City chefs to come out to a beautiful part of the world and get to know its farms, vineyards and fishing industry. The Bollmans envision having guest chefs for one-time events as well, not just recurring pop-ups. Sous chefs and chefs de cuisine could come out to see where their food comes from first hand and get a chance to experiment and create on their own terms. They also imagine going beyond dinners to drink and dessert tastings and cooking classes.

Bruce & Son is also considering doing tasting menus themselves in the future: multi-course, carefully arranged breakfasts or brunches. They’re inspired by Australia, where brekkie is the main meal of the day, and they hope to visit this winter for some delicious research. “We want to provide a great meal during the early hours of the day,” Scott says. Breakfast and lunch dishes are both served all day long, and the menu changes weekly, as they’re inspired by new things and what’s available from local farms shifts.

“The farms we work with help dictate our menu,” Kassata says. This approach requires some education, she admits, but”our customers are growing with us.”

Bone marrow bread pudding, and dishes seasoned with lovage, or accompanied by sea beans, may not be what first comes to mind when you think of brunch. “Our vision is to do local food with technique, and to take brunch seriously and focus on it. It’s the most important meal of the day, but it has a bad reputation as a way restaurants get rid of old food or make do with scraps from their dinner service. We want to go outside the box.”