Meet the Master of Mixology Behind Bridgehampton Inn’s Bar

Kyle Fengler is changing the way the East End sips—one creative, impeccable cocktail at a time. 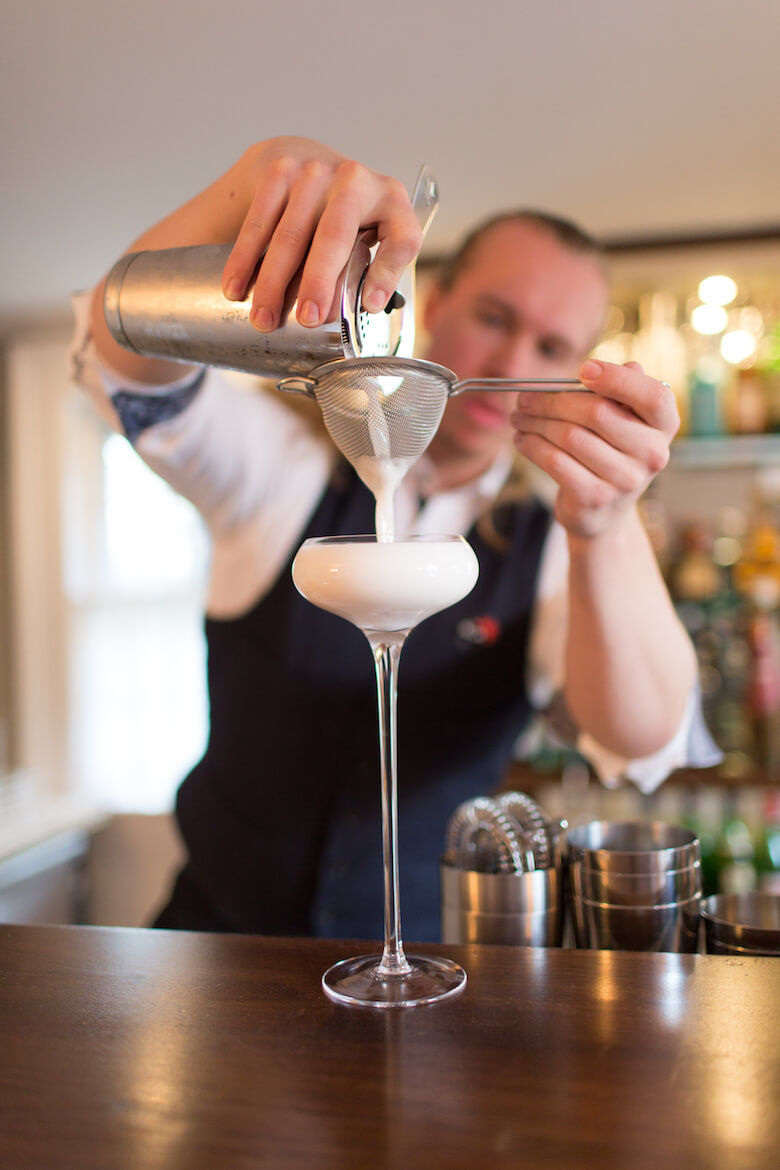 Inquiring minds want to know—what Kyle Fengler is mixing up at the Bridgehampton Inn Restaurant.

There are a lot of bartenders on the East End and then there is Kyle Fengler at the Bridgehampton Inn. “Being a bartender is knowing the mechanics and service skills to make and serve drinks,” says Fengler. “A mixologist knows why a drinks turns out a certain way and why it creates a certain effect.”

Through synergy and practice, Fengler understands how different flavors achieve a different effect and how they interact with each other. Just don’t ask him for a spicy margarita.

Growing up, Fengler, 26, worked at Loaves & Fishes Foodstore in Sagaponack with his mother, Sybille Van Kemp, and his late grandmother Anna Pump, who began the legendary gourmet takeout shop in 1980.

Fourteen years later, Pump and Van Kemp bought the historical Bridgehampton Inn & Restaurant. Slowly and meticulously, the family transformed the modest space into their version of perfection. Okay, a lot of people’s version of perfection, especially if they love to eat, drink and be merry. 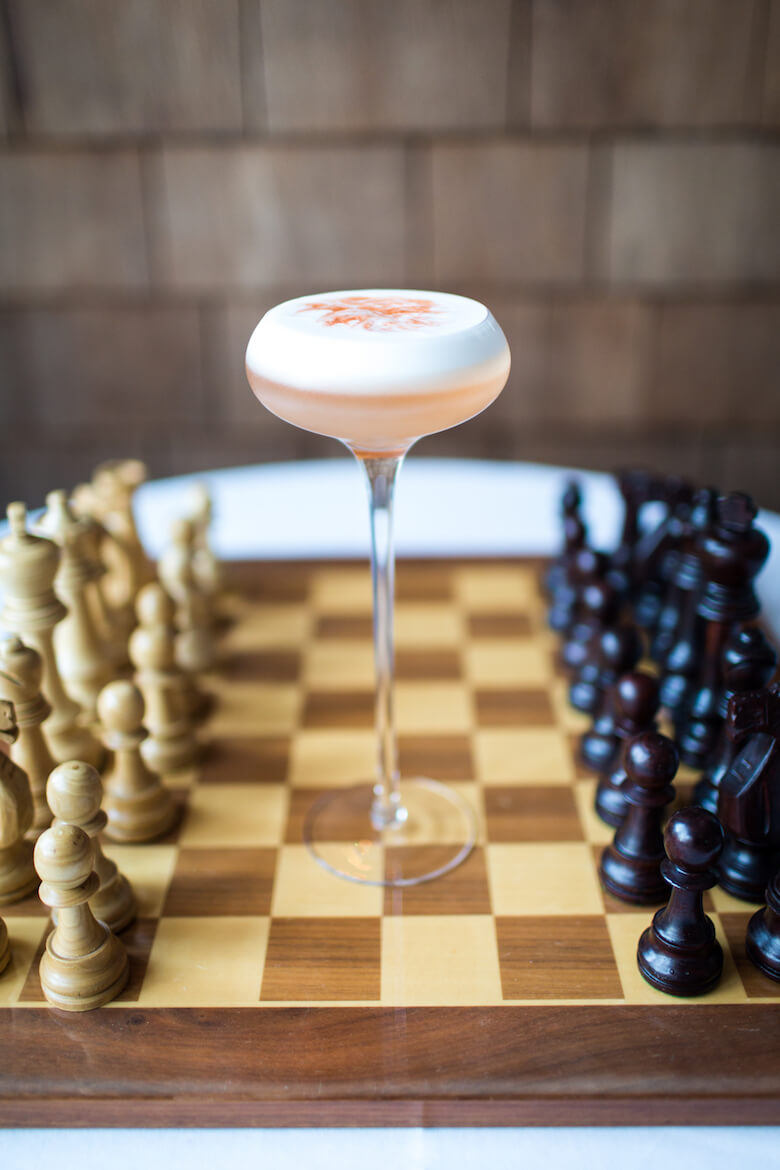 The Loaves & Fishes Cookshop—a retail version of kitchen heaven—rounded out the family’s offerings in 2003, but it wasn’t until 2014 that the restaurant opened to the public.

“My mother asked me if I was interested in bartending and I said, ‘Absolutely,’” Fengler says wearing a white shirt and black trousers, his blond hair tied back, behind the bar. Located just off the kitchen, the barroom is the oldest part of the building, built in 1795. There’s a couple of café tables in front of a fireplace and only four seats at the bar.

Fengler did not pass up an opportunity to have a creative venture to call his own, despite the fact he had never touched spirits or wine before. “I dove into it,” he says. “First on spirits and cocktails and then as I became more comfortable with that technique, broadening my knowledge of wine.” 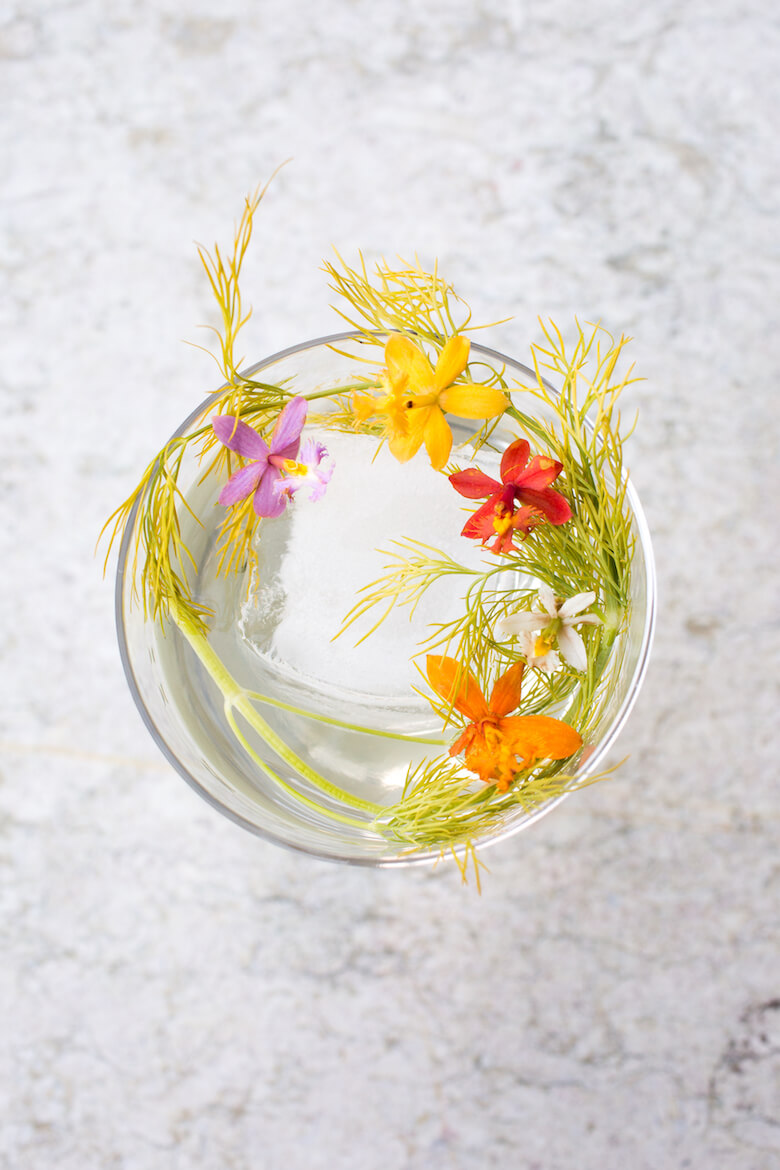 A mere mixologist does not just mix, but must be able to make good recommendations as well as educate people in a way that’s happy and comfortable. “Find what’s best for them,” he says of his guests. “Approach them intelligently.”

For example, sweetness is subjective. When a guest tells him they don’t like “sweet” or “fruity” wine, he digs a little deeper. “What drink you enjoy or find sweet may be totally different than mine or anyone else,” he says.

“Oftentimes, what they don’t like is more complex an issue than residual sugar,” Fengler says. “All wines are sweet. They’re made from fruit.” Like a detective on a case, he tries to figure out what a guest would like outside their comfort zone. Rather than pushing them, he gently guides them to broaden their horizons.

An inquisitive nature, trial and error and speaking to people help. Sharing experiences with his guests inevitably opens their imbibing horizons. Fengler doesn’t want to provide people the safety of falling back on what they can drink anywhere else.

“I usually encourage something new by eliminating options,” he says. “If safe options aren’t there, they can’t fall back on them and try something new.”

Don’t expect to find popular spirits like Ketel One, Tito’s, Bacardi or Beefeater. “I don’t carry those,” he says. 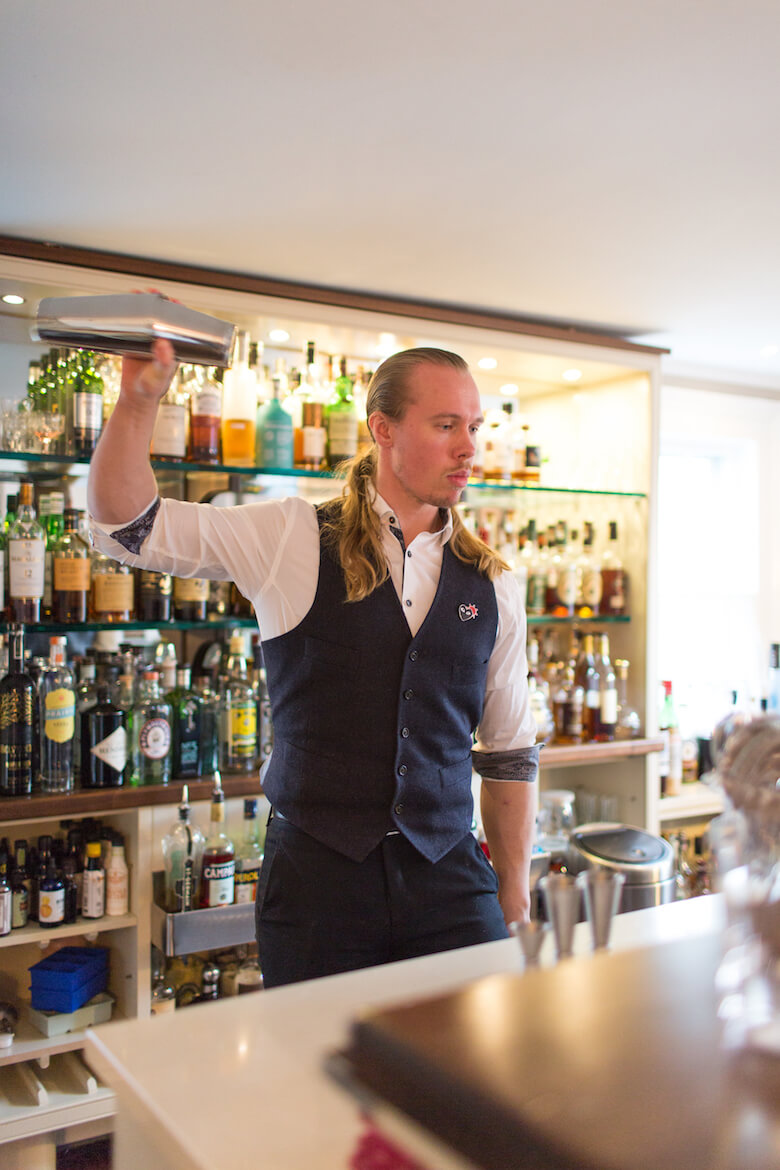 Instead, Fengler showcases niche products like Prairie organic corn vodka from Minnesota. “It’s very smooth, a tiny bit sweet and doesn’t seem as alcoholic,” he says. “It’s easy to drink and the quality of production is better. They pay close attention.”

Nine out of 10 guests enjoy the Prairie at least as much as Tito’s. “Less than that ever complain.” According to Fengler, the goal of a great experience is “less is more.” Provide less option and more thoughtfulness.

The family has long held close relationships with local farmers such as the Foster and Pike families, so it’s no surprise Fengler won’t serve a Bloody Mary outside of tomato season. His Scandinavian background dictates simplicity, so cocktails are minimally garnished. Some bartenders forget that a Bloody Mary is a drink not an appetizer and rely heavily on garnish, not complexity of flavor. 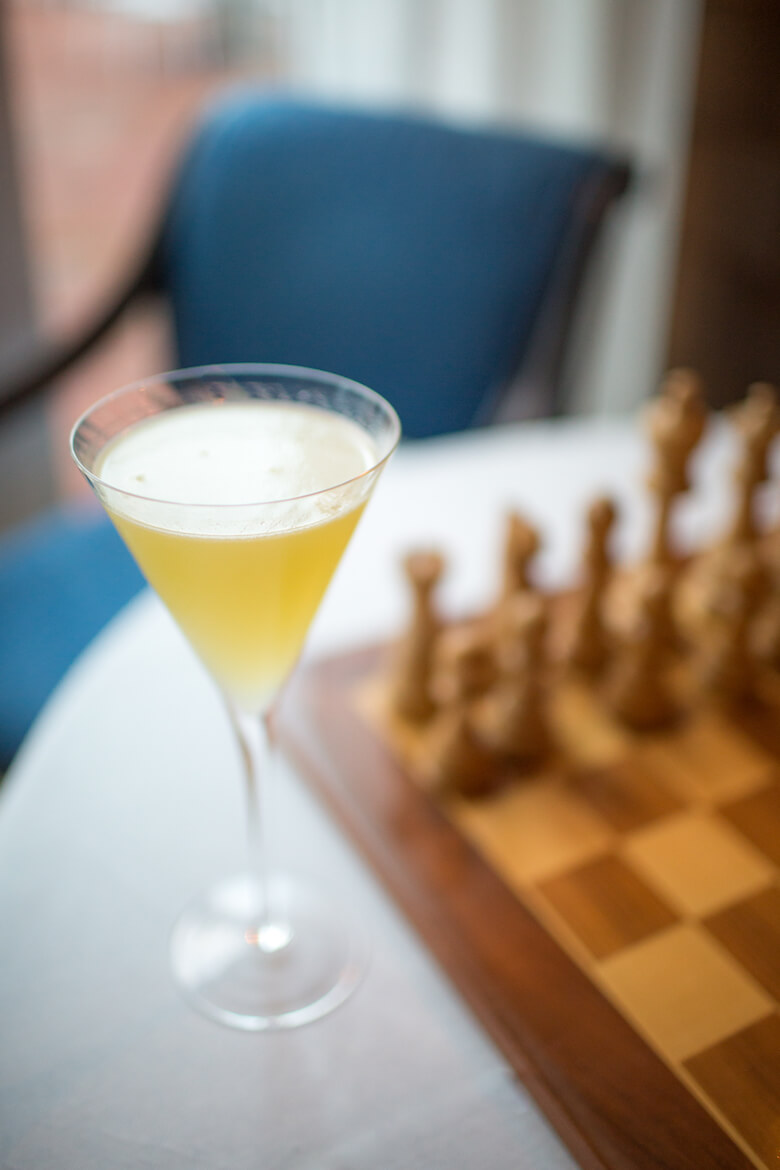 Fengler does offer the “Huntsman,” his version of the extra-dry martini, the most frequently requested cocktail, all year round. “The martini is as strong a cocktail as you can get,” he says. “I hesitate to call it a cocktail.”

The Huntsman calls for Rittenhouse 100 bonded rye with Vermut Negre, a sweet Spanish vermouth, a touch of Luxardo Maraschino, a nutty, perfumed liqueur from Italy, and a few dashes of orange bitters, garnished with an orange peel twist. “Vanilla and marzipan bridge the whiskey and vermouth to create a complex and smooth drink brightened by the citrus,” he says. No wonder it’s his most popular drink.

Still, he admits the margarita deserves some attention. A margarita at the heart is a balance between sweet and sour and tequila as a base. The classic recipe is tequila, lime juice and triple sec, an orange liqueur.

“I don’t use a liqueur,” he says. He creates a cordial using unrefined cane sugar macerated with orange zest, allowing the sugar to absorb all the oils from the skin. The syrup is infused with everything that makes an orange intense and bright.” 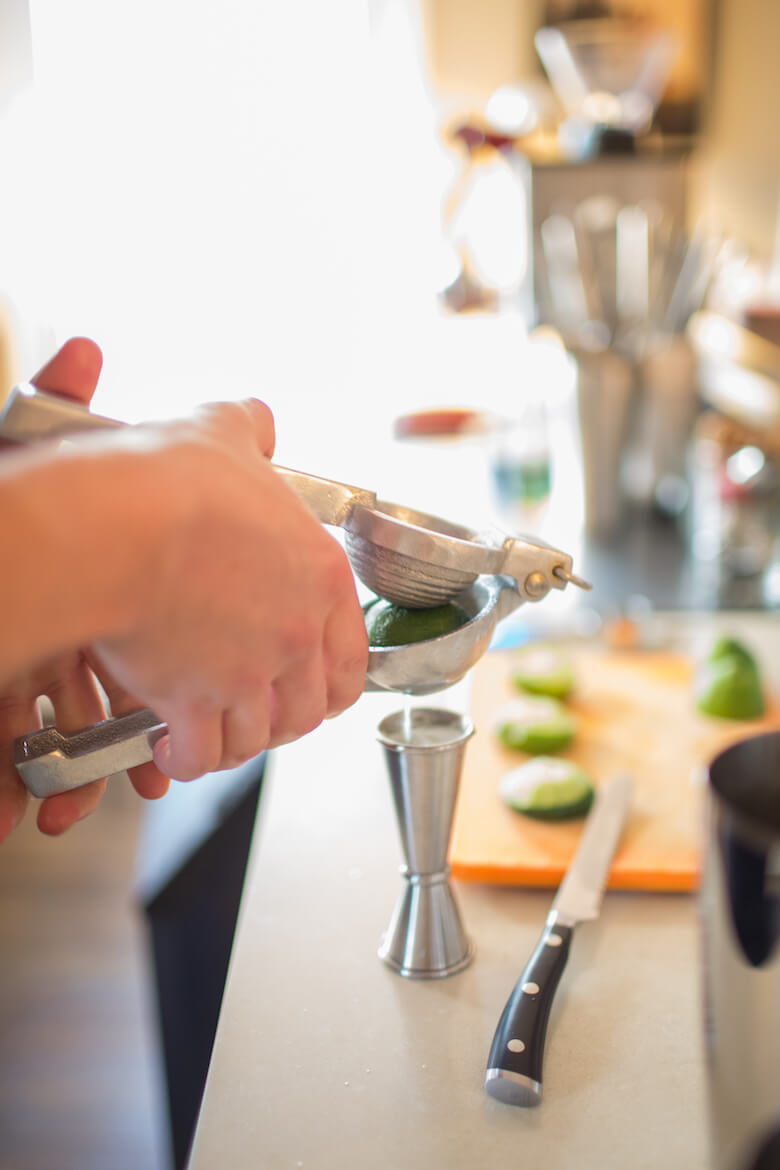 “Infusing the spicy pepper in the tequila gives you more control and a more complex flavor,” he says, as opposed to muddling the peppers. You can taste the difference on your tongue. Your mouth gets a sensation but doesn’t burn, leaving you with the ability to drink more and taste more. Infusions take time and practice, however.

“Not all peppers are created equal in size or concentration of flavor,” he says. And not everything is better fresh. It’s best to let some things sit for a while. In this case, at least six hours to impart spiciness into the spirit.

If Fengler puts this much energy into the drinks he’s not crazy about, imagine the passion he puts into the more complicated drinks he loves to create. “If I couldn’t create new recipes I wouldn’t be doing what I’m doing,” he says.

“I love food and drink and sharing it with other people,” he says. “I really love working with my family and I’m not just saying that because my mom is in the room. I can’t imagine not working with them.”

And I can’t imagine not sipping his spicy margarita.