This Sunday, Sip & Savor to Save the Sag Harbor Cinema 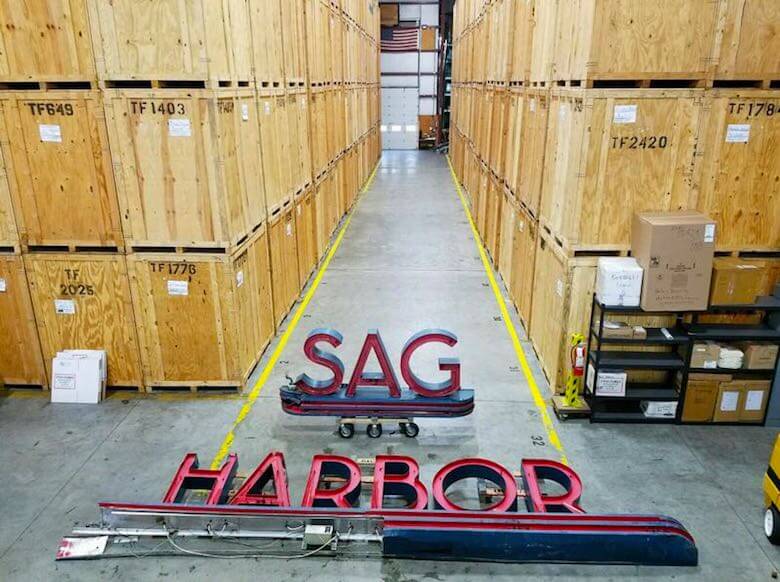 This Sunday, Party for the Cinema! in Sag Harbor.

Pair Baron’s Cove’s white bean crustini with the Beacon’s salmon tartare, and finish with a Wölffer Estate rosé, and you’ll pretty much have the perfect Hamptons summer meal. Now add to that a tasting menu from nearly 30 other local restaurants, vineyards and food shops, a big tent, and the good will of an entire village, and you’ve got BIG TENT: Party for the Cinema!

Held on the Long Wharf in Sag Harbor this coming Sunday, July 16, the benefit is undertaken by the Sag Harbor Partnership and co-chaired by Janye Young and Hilary Loomis.

Sag Harbor Partnership (formerly Save Sag Harbor), is a not-for-profit dedicated to the preservation and enhancement of the quality of life in our little village. The looming threat of CVS, view-blocking gigantor condos, emissions-choking traffic, and the loss of affordable housing for locals was a hefty enough list of challenges for any organization. But on December 16th of last year, a wind-fueled fire ripped through shops, apartments, and the beloved historic Sag Harbor Cinema, destroying everything but the back screening room (which sustained damage) and coating everything around it in charred ice.

The very character of the village seemed in jeopardy, and locals tearfully but defiantly supported Main Street during the holiday shopping season as an enormous—and literal—black hole met them. While firefighters had braved sub-freezing temperatures to save the rest of the town, and residents all over the East End raised tens of thousands of dollars for those who lost their apartments and belongings, Sag Harbor Partnership—spearheaded by artist April Gornik—stepped in to save the Cinema.

The Partnership is now in contract to buy the site—and rebuild the Cinema as the Sag Harbor Cinema Arts Center (SHCAC), with a commitment to education, outreach, and programming for all the people of the East End, year-round. The original iconic façade of the theatre will be completely rebuilt and the famous sign, currently in storage, restored.

BIG TENT hopes to raise much-needed funds for this endeavor (currently just over $4 million has been raised and $8 million is needed by this coming December to close the deal), and seeks to do it with not just big celebrity donors (thank you, Martin Scorcese and Billy Joel!) but also with the help of us regular folks who can’t normally afford to dress for a Hamptons benefit let alone party at one. Tickets are just $50 for adults, $15 for kids, and include a “Taste of Sag Harbor” from amazing local restaurants, live music from the HooDoo Loungers, and face painting for children by area artists (want to see your kid with a kitty face, courtesy of a MoMA-collected artist? Come to the benefit!). Wines from Bedell, Channing Daughters and Wölffer Estate will abound. Hot dogs and hamburgers donated by Cromer’s Market and the Corner Bar will be grilled by the Sag Harbor Volunteer Fired Department. 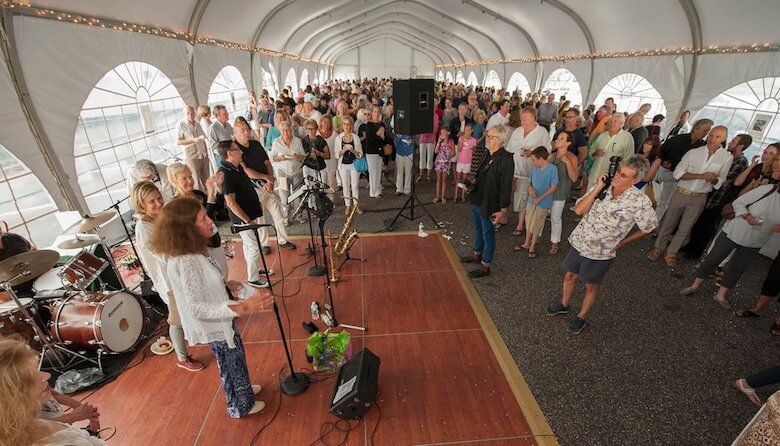 “It’s astounding how all the restaurants and vineyards fell into line and were all so generous,” notes Hilary Loomis, while Jane adds, “It really shows the heart of this village, that everyone is willing to do this in the height of the summer season.”

Under the big tent on Long Wharf will be multiple restaurant and wine tables, with picnic tables for sitting. Bay Burger’s Liza Tremblay will be bringing “tubs of her famous ice cream,” says Hilary, while BuddhaBerry has been “hand-packing beautiful packets of candies.” Gourmet cheese platters from Cavaniola’s, quesadillas from Cilantro, charcuterie platters from Harbor Market, gazpacho from PAGE, veggie sushi from Sen, and “mini whale cookies” from Sag Harbor Baking Co. will be just some of the incredible food offerings.

Tickets are available for sale online now. The benefit is nearing capacity, so hurry!