We just may have found the best ice cream on Long Island. 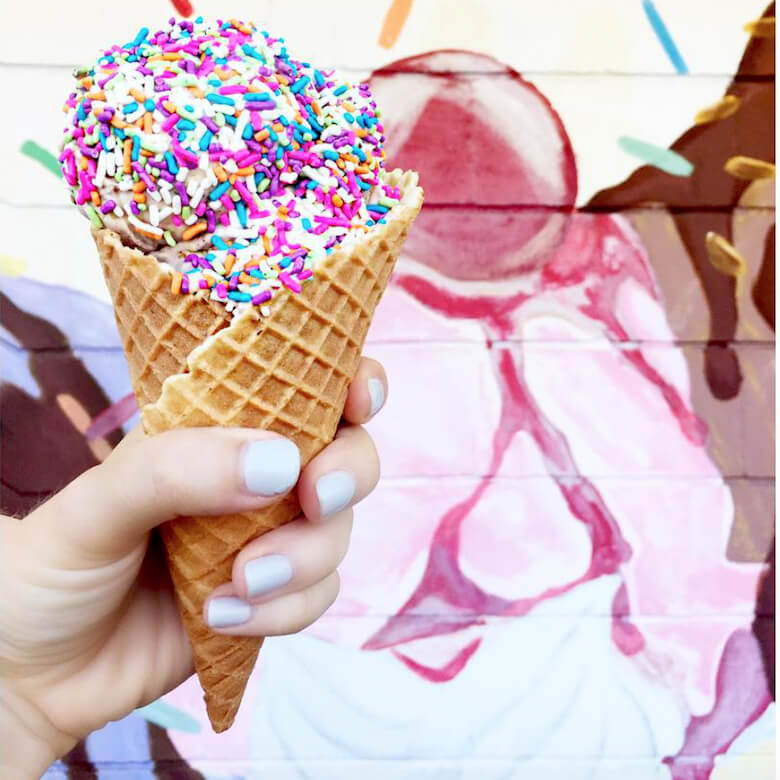 I have found the greatest ice cream on Long Island. This is a fact.

Magic Fountain Ice Cream, a red-roofed barn on the corner of Main Street and Sigsbee Road in Mattituck, opened as a Dairy Queen in 1966. It has been family-owned and operated (albeit by separate families) since 1977, and the current owner, Choudry Ali, has owned the store for the last decade. Billing itself as “one of the most popular ice cream stores on Long Island,” Magic Fountain delivers nostalgia by the scoop.

I will confess that I am not an ice cream eater, which is to say: Forced to choose between brownies and ice cream, I’ll always take a brownie, or two, or three. I like ice cream, but I’m generally not moved to wax poetic about its creaminess. I’ve never met a donut I didn’t like, but I’ve met many cones of vanilla ice cream that did nothing for me.

Such is not the case with Magic Fountain, which had a respectable line, even on a Wednesday afternoon. A sign out front advertises the day’s special flavors. Trips upon trips down Route 25 had piqued my curiosity. Fig and honey ice cream? Rainbow cookie? From the exterior, signage notwithstanding, Magic Fountain looks no different, really, than your standard-issue Carvel. Was there something inside I was missing?

As it turns out, yes, there was something I was missing. Magic Fountain sells about 30-40 different year-round flavors, supplemented by a handful of seasonal flavors that present themselves at the appropriate times. One can expect the pedestrian (rocky road, salted caramel, coffee), but there are also loads of surprises, ranging from the bright purple lavender to the disconcertingly blue Cookie Monster (which tasted like cake frosting and was studded with pieces of cake and cookie). Kind, patient staffers will let you sample anything you like, though if you’re traveling from the South Fork, as I did, your best bet is to travel with a cooler and some ice packs and to order flavors by the to-go scoop. Magic Fountainers will happily scoop to your heart’s content, packing your ice cream dreams up in little cups with disposable plastic lids. In my case, that meant seven scoops, packaged separately for my later enjoyment. Into the cooler they went.

About that ice cream. I brought home Cookie Monster, rainbow cookie, s’mores, lavender, fig and honey, and black cherry bourbon (my only disappointment, as it was a little too boozy for my taste). Waiting on line for my order to be filled, I tasted honey cinnamon (next time, next time) and the larger-than-life five 0, a combination of coffee ice cream and chopped up donuts.

Bases are thick and creamy, with not a trace of iciness. Flavors like strawberry shortcake actually have the dessert mixed into the base (in the American Midwest, this technique of blending a baked dessert into ice cream or frozen custard is called a concrete), offering the best of both worlds. Ice creams were not too sweet, even the weird, blue Cookie Monster, which went down easier than I’d care to admit. Marzipan-centric rainbow cookie transported me straight to a kitchen of my Jewish childhood, where the cookies would arrive at holidays, and never in between.

Which is where Magic Fountain falls for me, by the way—in that nostalgic place between where I come from and where I am now. I can imagine a Dairy Queen, the tugging of a parent’s sleeve. Please? Can we? Just this once? Rainbow cookies for holidays. A Cookie Monster cake for my 4th birthday, celebrated in a park, in Denver. Figs from a tree my mother had in her Park Slope backyard, 30 years ago. These flavors, they’re meant to transport, and transport me they did. It’s relieving to know that I can go back to that sweet, sad place, childhood on literal ice. All it takes is a drive to Mattituck on a Wednesday afternoon, cooler in hand.