Joe Realmuto: The Honest Man Behind Nick and Toni’s Magic

Meet the chef behind the most quintessential Hamptons restaurant—and so much more. 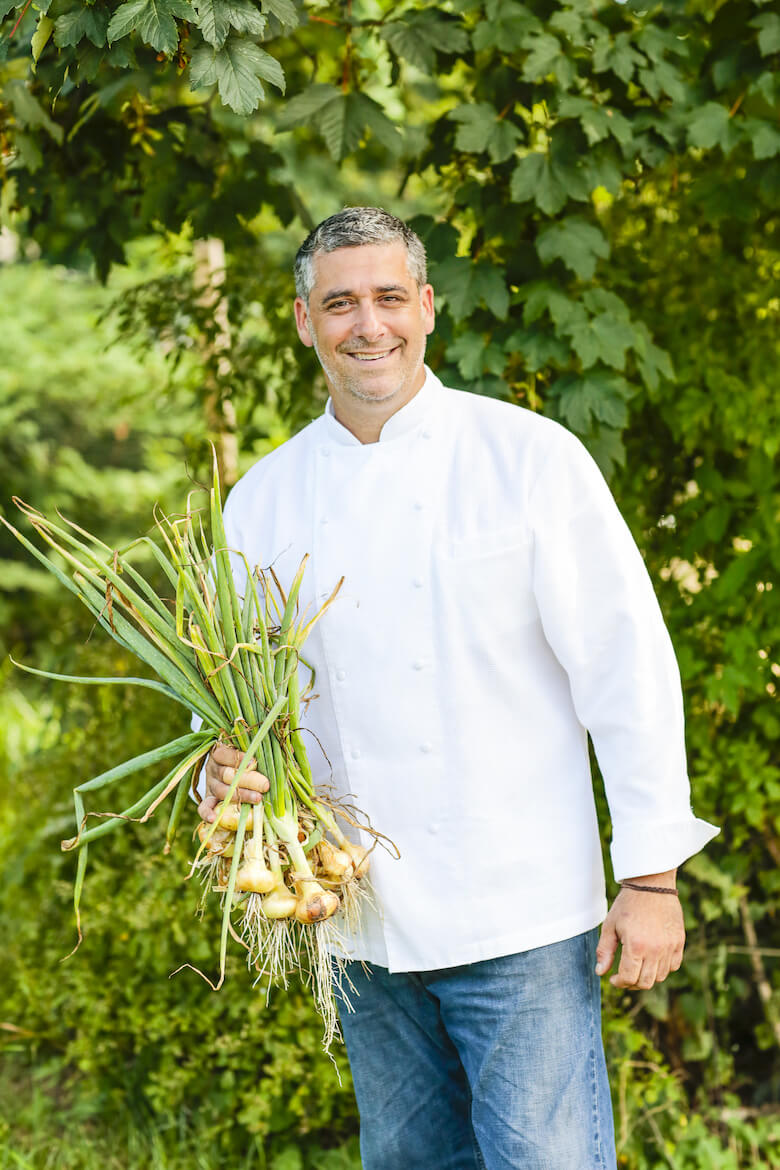 It was the promise of rent-free housing that drew Joe Realmuto to East Hampton—and a job at Nick and Toni’s that kept him coming back. • Photo by Eric Striffler

Cooking took Joe Realmuto by surprise. Fourteen years old and looking for a way to earn a little extra cash, he followed his siblings to a catering hall in his native Queens. Assuming management would position him in a front-of-house role, dishing out prime rib and steamed veggies to event guests, Joe was shocked to learn his place was in the kitchen. Adaptable and quick, he took to his role at the cutting board and over gas burners like a seasoned line cook.

But as he continued his work at the catering hall, he was weighed down with the notion that he had to pursue a stable career that resembled the path his father and grandfather took. So, he enrolled in the accounting program at CUNY Baruch. But cooking still overpowered Joe’s mind; he preferred the numbers in a recipe to those on a balance sheet. He left Baruch and enrolled in the Culinary Institute of America in Hyde Park. After his first year, he was drawn to the Hamptons, where his then-girlfriend’s family owned a home. It was the promise of rent-free housing that drew Joe to East Hampton—and a job at Nick and Toni’s that kept him coming back. 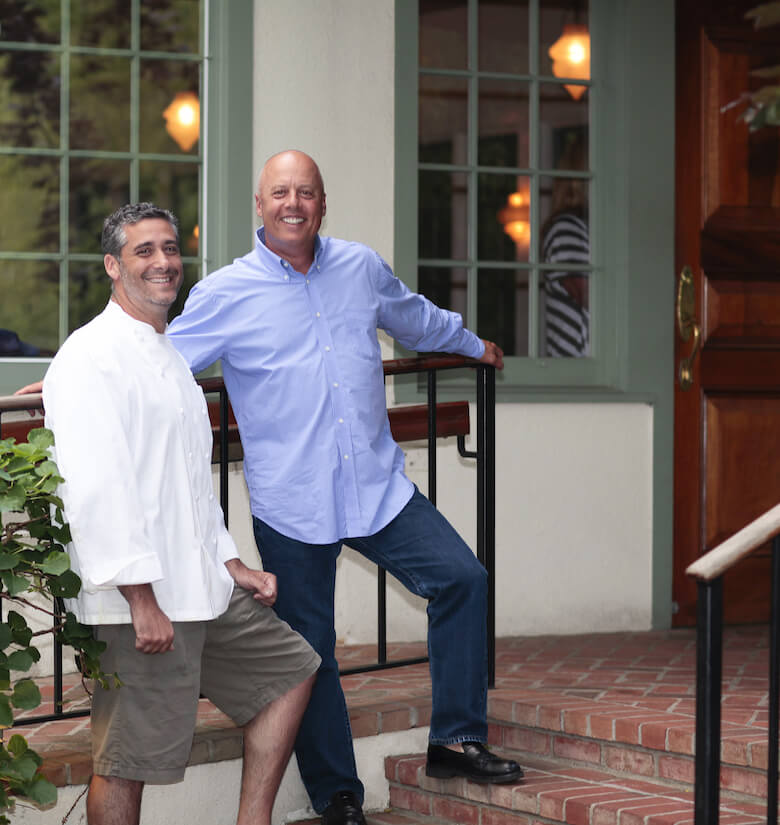 Joe Realmuto and Mark Smith at Nick and Toni’s. • Photo by Eric Striffler

“Do you miss living in the city?” I asked Joe during a phone call in January, as he was prepared to move out of the recently shuttered Nick and Toni’s Cafe in Manhattan’s Upper West Side.

Through his still-obvious New York accent, Joe mused over the idea. “I’ll always have a connection to the city. The cafe gave me a reason to come in regularly, especially during the quiet Hamptons winters.” But living on the East End gives Joe a life that for most chefs is a pipe dream. “In the Hamptons, I can enjoy my surroundings—it’s one of the reasons I live out here. On my days off, I can go fishing or clamming out in Montauk. Being a partner [in the restaurant] and a chef, there is more quality of life outside and inside of work. For me, I need that balance. I don’t want my kids to go off to college and wish I spent more time with them.”

Joe’s culinary career started that first summer in 1993 when a friend told him, “If you’re going to cook in the Hamptons, you need to work at Nick and Toni’s.” At the time, he imagined his first summer there was just a resume boost and he went back to the city that winter to help a friend open a new restaurant for BR Guest Restaurant Group. But the summer of 1994 brought him back to the Hamptons as a sous chef for Nick and Toni’s. “I came back out and never left after the season was over.” As the restaurant’s popularity grew, so did his role within it—moving from sous chef to chef de cuisine. Now, he’s a partner in Honest Man Restaurant Group and Chef de Cuisine of the group’s four restaurants: Nick and Toni’s, Townline BBQ, Rowdy Hall, and La Fondita.

“I always look for inspiration while eating out. It’s so important for chefs to dine out,” Joe Realmuto says.

Each of their restaurants holds its own identity and is happily joined by more restauranteurs who are attracted to the beauty of the South Fork. When asked how he feels about the disruption of the once untouched beauty and low key vibes the Hamptons provided for decades, Joe notes that he, “Welcomes more restaurants coming to the East End. It’s become more of a year-round destination for people now that there’s more options in winter.” Selfishly, he’s also grateful for new restaurants to try on his days off.

“I always look for inspiration while eating out. It’s so important for chefs to dine out.” Joe rarely hits the same new spot twice, but there are a few standbys he looks to for a familiar meal. Among his favorites are Michael White’s restaurants Osteria Morini and Marea and Barbuto, where friend Jonathan Waxman presides. Though, Joe’s preferred dining experience is at his grill. A true Hamptonite, Joe’s meal of choice includes grilled steaks and whole fish, freshly dug oysters and clams, and crabs broken over the family table with his wife and kids. 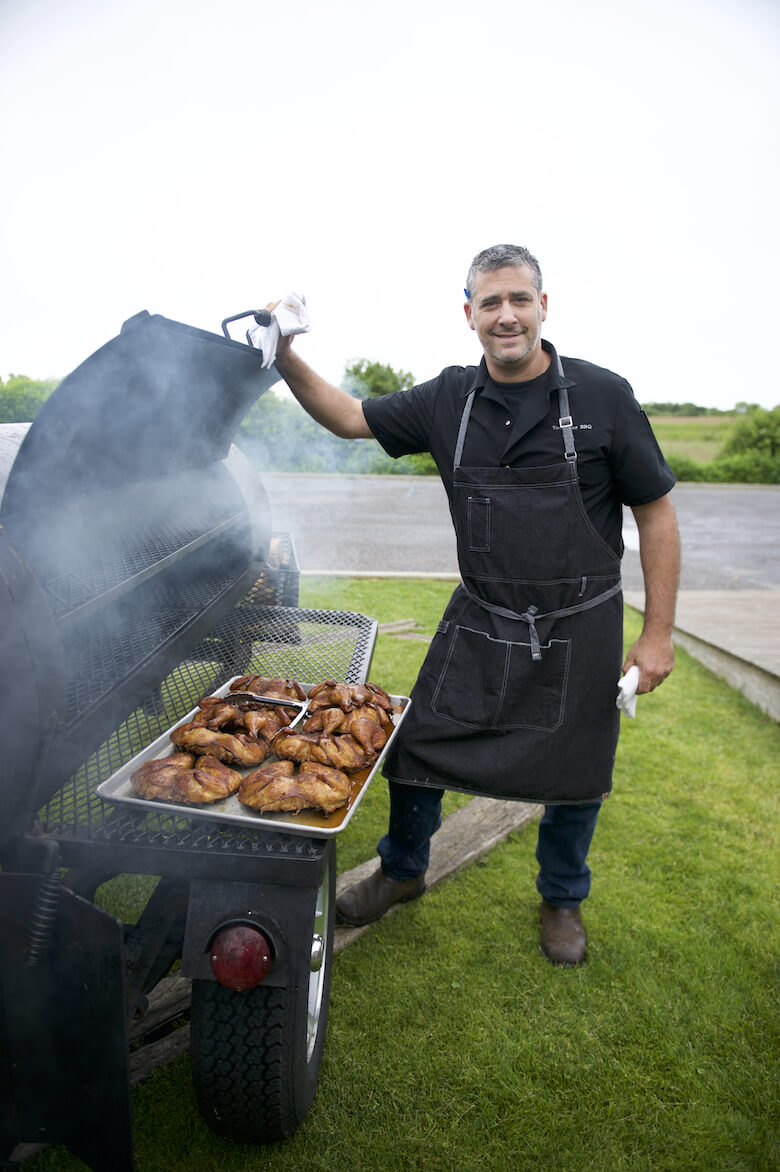 Joe’s meal of choice? Grilled steaks and whole fish, freshly dug oysters and clams, and crabs broken over the family table with his wife and kids. • Photo by Doug Young

But no matter the buzz around new eateries through the Hamptons, his original home of Nick and Toni’s will always hold an allure for the celebrities and locals who’ve held court there since the very beginning. The locals hold a special place with Joe as the people who support his team year round. Celebrities attract a welcome clientele, but ultimately Joe focuses on providing everyone with a special dining experience.

Treating everyone like family is the restaurant group’s mantra. The restaurant, opened by husband and wife team Jeffrey Salaway and Toni Ross, nurtures its staff as it does the large garden outside the kitchen doors. The death of Jeffrey over Labor Day weekend in 2001 cast a dim light among the staff, with whom he was celebrating the end of another successful summer hours before the crash. His untimely death cast a shadow over the restaurant group’s jubilant dining rooms, but they moved forward in a way Jeffrey would be proud. When asked what inspires him most, how his tastes change and develop over time, Joe notes that it’s his chefs and cooks that keep him moving forward. “I constantly ask what they’ve seen, what they like, and what they’re thinking. I’m blown away by them every day.”

While scenes in the Great Gatsby make it seem like nights of decadence and frivolity are best had among the skyscrapers of New York City, Joe’s 25 years in the Hamptons were never spent in the shadows. Each night, 100 miles east of the city, he’s the principle in a “beautifully orchestrated ballet” where dupes fan out like feathers in Swan Lake and cooks move swiftly through the kitchen in a well-choreographed grand assemblé.