Come as you are to Montauk Brewing Company’s fifth anniversary party. 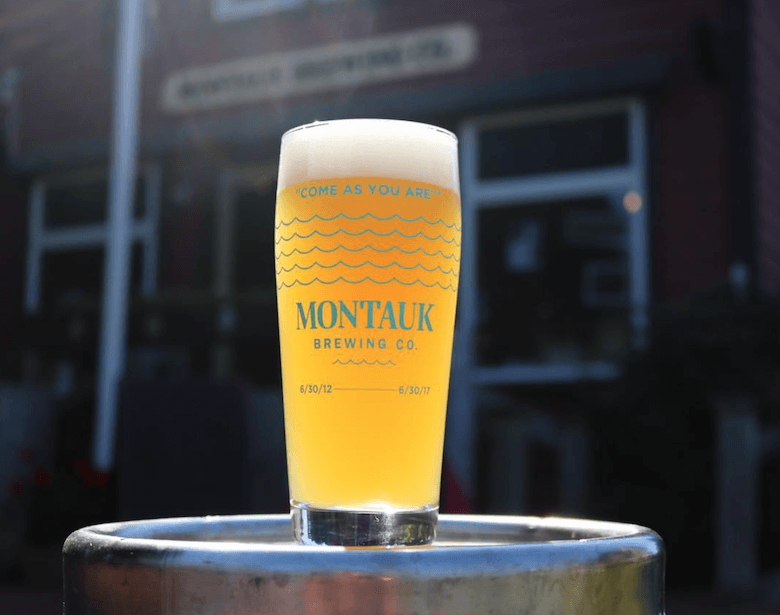 Lounging poolside at a friend’s annual Fourth of July party in 2014, I studied my Carolina-blue beer can and realized, for the first time, that the can said “Come As You Are.” The beer? Montauk Brewing Company’s Summer Ale. The motto made immediate sense. Montauk is the town where you can just do you. I hummed the motto, and title lyric to the Nirvana song on Nevermind, before finishing my beer and jumping in the pool to cool off.

When I brought this up to Vaughn Cutillo, co-founder of the beer company, he laughed. Apparently, I’m not the first to assume the company motto was a nod to Nirvana. “It’s always been more of a brand and community vibe than quoting Nirvana… which isn’t to say I’m not a fan.”

The beer company, which turns five this year and is celebrating with an anniversary beer and party at Ruschmeyer’s in Montauk on June 23, began as a community-driven project. The founders, Cutillo, Eric Moss, and Joe Sullivan, are Hamptons natives and high school classmates. When the three friends graduated college in 2010, they returned to the East End where they began homebrewing different beers. Their hobby quickly made them the most popular guys at summer barbecues, where they set up kegs filled with what we’ve come to know as their Driftwood Ale.

The guys quickly realized this was their opportunity to give back to their community. “Montauk is a town that demands respect. We wanted to create a company that honors the community that raised us.”

Five years later, they’re doing just that. Unlike many of the summer town’s businesses, the brewery’s tasting room is open year round, “even when there’s two feet of snow on the ground in February,” employing friends and community members and serving as a place to bring whomever you are to the table for a pint.

The warm embrace of Montauk is what’s allowed the brewery to grow so rapidly. Cutillo remarks that they are “one of the fastest growing breweries in New York, if not the fastest.”

While their local community will always be the East End, the guys welcome the rest of the island as well as the five boroughs to join them. “It’s cool for someone from Manhattan or Brooklyn to come out here on the Jitney and taste our beer only to go back home and see a case of our beer on the shelf of Whole Foods.”

And that visual—cases of Montauk’s iconic nautical flagged-beer—is strategic. Like their motto and their growth, the nautical-themed cans are a simple homage to Montauk being a beach town. Everyone who resides there year round or enjoys their summers on The End is always in the water surfing, swimming, and fishing. Respecting that gift of the sea is important to Cutillo, Moss, and Sullivan; so much so that they’ve ditched the plastic rings binding six packs of beer together in favor of recycled cardboard cases. Sure, the cardboard is slightly more expensive, but the company is committed to keeping their town—and the earth—pristine. Not to mention, the cardboard cases emblazoned with the beer’s own nautical flag is the only marketing the team invests in.

Montauk Brewing Company turns five this month! Thanks to all of our fans for your support, and thank you @guestofaguest for featuring our story. #montauk #beer #friends #thankyou #comeasyouare

The anniversary party is just as much a commitment to their hometown as their year-round tastings and brewing. Friends, family, and anyone who passes by (it’s open to the public) will gather to celebrate the brewery’s five years and another summer spent in what is arguably one of the most beautiful places in the country. To honor their achievements, Moss, the company’s brewmaster, tinkered for months perfecting their 5th Anniversary beer, which is 5.4% ABV for five years (which begs the question: how boozy will the 10th Anniversary beer be?). Moss used two hop varieties: cascade, which he uses frequently in their beers, and galaxy, new to the brewery and lending a tropical aroma to the Northeast style IPA.

When asked what the next five years look like, Vaughn goes back to their original mission: to grow with and for the community. Like Montauk’s fisherman, who take pride in every catch they make, the brewery’s team takes deep, personal care with every drop of beer they produce. As much as the town of Montauk resonates on a global level for its simplicity and beauty, we can expect the same from Montauk Brewing as the years pass.

Montauk Brewing Company’s 5th Anniversary party will be held on Friday, June 23, 2017—from 6:00 p.m. until late—at Ruschmeyer’s in Montauk. The event is open to all Montauk fans. Come as you are.