The storied chef is devoted to better feeding the next generation. 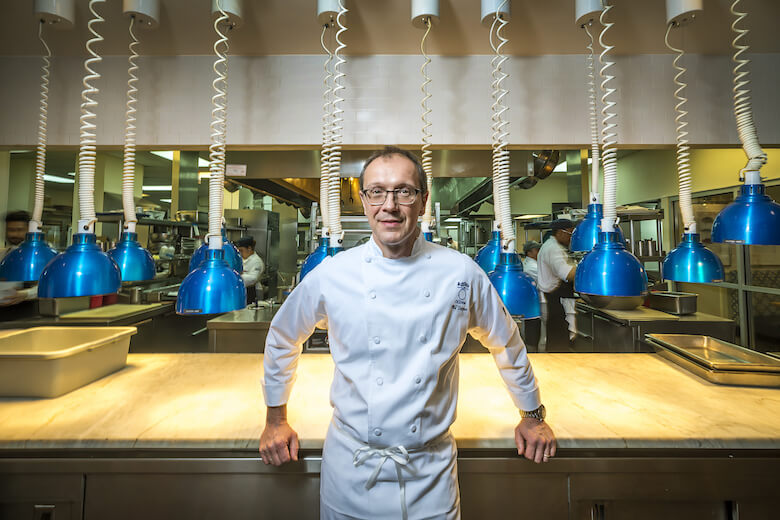 Chef Bill Telepan will be honored at this year’s Hayground Chefs Dinner. • Photo by Noah Fecks

Wellness in the Schools—the name says what seems obvious to every parent with a school-age child. And yet it is a concept that, without food advocates like Chef Bill Telepan, would remain in the dangerously hidden corner of a child’s education. Chef Telepan, of Oceana Restaurant in Manhattan, is being honored on July 30 at this year’s Hayground Chefs Dinner in Bridgehampton: for his activism and tireless work with Wellness in the Schools, a non-profit program that guides and helps public schools provide essential meals and culinary education to children. Thanks to Chef Telepan, 100 schools in four states are actively combating obesity and low academic performance with healthy meals and exercise programs.

Hayground School itself has played a large role in our own area, spearheading an Edible Schoolyard and Culinary Arts and Science program and spreading these concepts to public schools all over the East End by both example and outreach. Chef Telepan first heard of Hayground through Chef Jason Weiner of Almond Restaurant in Manhattan and Bridgehampton, whose daughter also attends Hayground School. The two chefs had worked together for a Wellness in the Schools benefit and sat on the panel for the East End School Wellness Conference.

“Wellness in the Schools was started in 2005 by three mothers in one classroom,” Chef Telepan explains. Three years later, Telepan’s own daughter started school in the same public school where the program had started. As he tells it: “One day they decided to hand out healthy sandwiches—and they were delicious. I asked them how I could help.” He started by cooking once a week at the school, but eventually Wellness in the Schools became an organized program that devised a monthly menu. “We went into 18 schools and did this. Then we had this idea to bring culinary graduates to the schools to help cook and train—but by that point we had so many volunteers we didn’t have to look far,” he notes proudly.

Anyone who has watched Jamie Oliver trying to infiltrate an American school cafeteria system will know the obstacles in serving kids healthy food can be—shockingly—steep. But in New York City, the Department of Education is the provider of school food. “We were able to work alongside them, with their rules, and they were cooperative,” Telepan explains. “We work with what’s called an WIS alternative menu based on their menu, and because of this they’re making strides.”

This cooperation is in no small part due to Telepan’s persistence, generosity of spirit, and the congenial way he approaches working with schools. As a school-age kid himself, Telepan (who was the executive chef and owner of his namesake Michelin starred restaurant Telepan) remembers not “having a lot of means but having my mom cook for us—and we ate well and we ate real food. McDonalds was a treat.” He jokes that he “got to know the lunch ladies pretty well because I was always hungry.” But also notes that, thirty-to-forty years ago it was commonplace that school cafeterias served, if not the best of food, at least real food cooked on the premises.

“The government has made it very hard for kids to eat well in schools, and funding for school lunches is getting lower,” he notes. We are a nation of eaters who, more and more, are concerned with how overall health is affected by the food we eat, yet, as Telepan rightly asks, “Why is it cheaper to buy chicken from KFC than to roast a chicken yourself? It’s a whole bigger issue: this making processed food so cheap.”

Cheap comes at a cost, when it comes to nutrition. Some parents may question that, while it’s lovely for kids to grow or cook their own food or eat well in school, at what cost to academics are such programs being launched? To this, Telepan answers: “Think about when you’re hungry, how well are you doing? You can’t think well, you can’t focus, you can barely run up a flight of stairs. If kids have a healthy lunch and good recess, they are doing really well academically.” He remembers when Wellness in the Schools was first launched, “we saw kids coming in with big bags of chips and orange soda and these kids were lethargic and unfocused. We see kids benefit from healthy lunches.”

And like Arjun Achuthan—who heads up the Culinary Arts program at Hayground—Telepan also brings science and math into his cooking and fitness classes: it’s not a loss of academics but a gain of wellbeing, improved brain function, and retaining learning by doing.

“If the nation would think about the difficulties kids are having with obesity and low performance—the cost lost to our thinkers, innovators, even our military—they will quickly see how much this is costing us,” Chef Telepan says. “And if they change how that money is spent, and how much they are funding meals in the schools, and if they think about the next generation of kids being healthy and sharp, the benefits are all there.”

Chef Bill Telepan will be honored at this year’s Hayground Chefs Dinner, which benefits the Hayground School and its Culinary Arts and Science programs, on Sunday, July 30 at 5:00 pm. For tickets, visit: www.Haygroundchefsdinner.org.