Do try this at home: A refreshing, healthy side dish that satisfies. 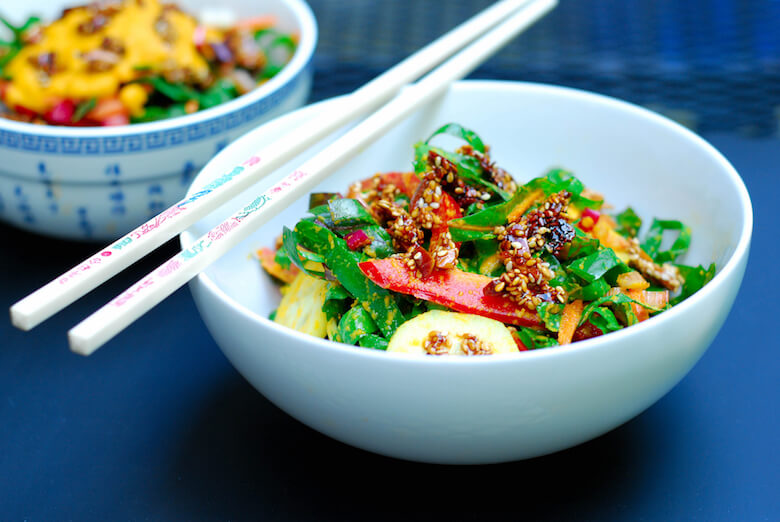 I didn’t go to a sushi restaurant until I was in college. The first meal I ate was a typical lunch special: miso soup, salad, and two rolls. My taste buds (and brain) took a little while to be okay with the idea of eating raw fish, but I fell in love with the orange salad dressing instantly. I loved the crunchiness of the iceberg lettuce paired with the tanginess of the dressing. It was at that moment I realized that I needed to have the dressing at home all of the time.

I have recreated my beloved orange carrot ginger dressing so it is gluten-free, nut-free, and vegan, which is is key for those who follow certain diets or have food sensitivities. It can be hard for many to eat out, especially at any types of Asian restaurants where many condiments used have wheat and preservatives, so I hope this is helpful for readers! This recipe does have soy sauce in it, but those sensitive to soy can use a substitute like coconut aminos, which is wheat- and soy-free and looks a lot like soy sauce. Keep in mind, though, that coconut aminos is less salty than soy sauce, so you may need to add a little salt to the dressing.

To make this salad more hearty, the iceberg lettuce is replaced by seasonal greens, specifically rainbow chard and kale. Chard is an excellent source of vitamins A, C, and K, and minerals like magnesium. In addition, it’s very versatile and can be sautéed, cooked in soups and stews, or eaten raw. Plus, it’s gorgeous and so vibrantly colored, which makes eating your greens more fun.

The greens are paired with red cabbage, peppers, carrots and radishes for crunch. To add even more crunch and a little sweetness, I make a sesame and almond brittle to garnish the salads. This salad is large enough to feed a crowd and tastes even better the next day, so don’t fear if you have leftovers. 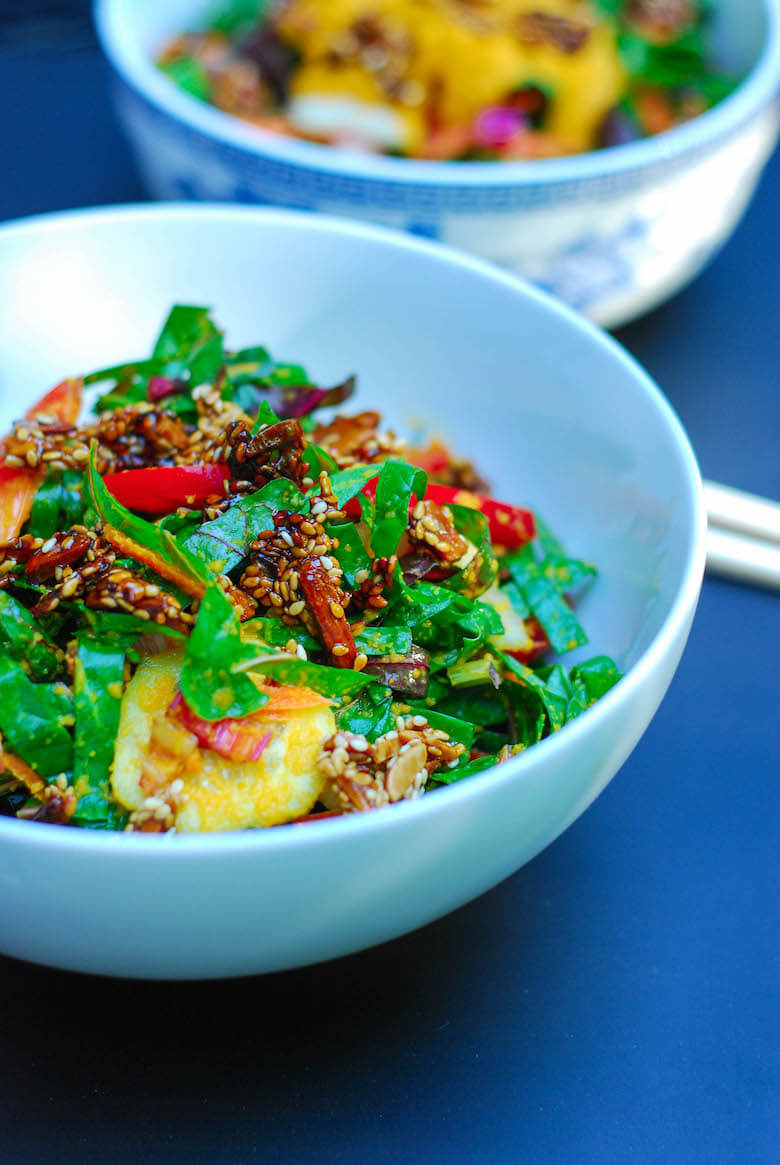 For the Nut Crunch:

To make the dressing, combine all ingredients except the oils in a high speed blender. Blend for 30-60 seconds, or until the mixture is very smooth. Add in the olive and sesame oils and blend again for 5-10 seconds.

Separate the tough ribs from the rainbow chard and kale. Make a chiffonade with the greens, rolling up the leaves and slicing them very thinly, and put them in a large mixing bowl. Chop the chard ribs thinly and add to the bowl, and discard the kale ribs. Thinly slice the red cabbage, pepper and radishes and add them another bowl. Peel the cucumber and slice them into rounds. Use a peeler to make long carrot ribbons, and add the cucumbers and carrots to the bowl with the cabbage in it.

To make the sesame crunch, combine the sesame seeds, almonds, honey (or agave) and oil in a small bowl. Spoon the mixture out on a parchment covered pan, making sure to flatten out the mixture so it’s very then. Place the pan into a 325 degree preheated oven, and check the mixture every few minutes to ensure the nuts don’t burn. When the honey is browned and the nuts are golden, remove the pan from the oven. Let the nuts fully cool before handling them. Once fully cool, you should be able to break them into crispy bits and chunks.

Dress the salad greens with most of the dressing and massage it briefly with your hands so the greens begin to soften and the dressing coats all of the chard and kale. Toss in the remaining vegetables and dressing and mix together with serving spoons or tongs. Garnish the salad with the sesame crunch and enjoy!