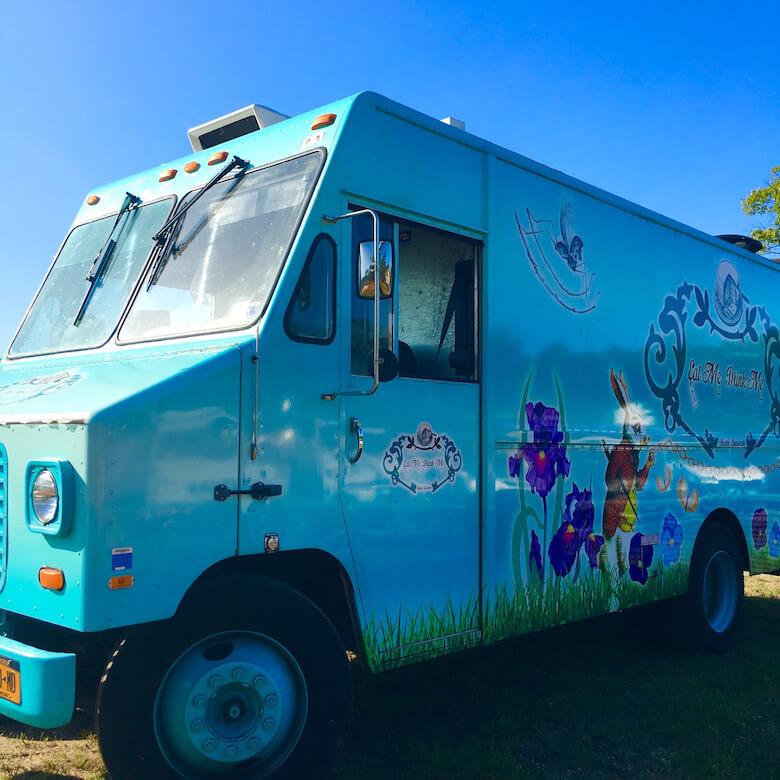 Last summer, pregnant and perpetually hungry, I dragged my partner to the parking lot of the Southampton Elks Lodge, where, I had learned from a billboard sign, the town would be hosting its inaugural Food Truck Festival. My ever-expanding stomach trembled and roiled; I was going to do some serious damage. But all that awaited us at the Elks was a dusty, near-empty lot, possessed only of two sad vendors who looked like they had missed the memo telling their colleagues to stay home. We didn’t even bother parking the car.

And so, my hopes were not entirely high when I cruised into the lot of the Flanders Food Truck Festival on May 21. The three-day-long festival was an invitation to East Enders to visit Flanders, the Riverhead-adjacent town that most know for its inimitable landmark, a giant duck with red eyes that glow at night. (“Flanders: Home of the big duck,” a sign entering the town reads.) Could Flanders pull off a foodie-friendly festival, big duck notwithstanding? It was time to find out.

This time around, no longer pregnant but still plenty hungry, I brought my now-five-month-old son, as well as my partner, Dan, and our friend, private chef Adam Ben’Ous. If you’re going to manage expectations at a food festival of any sort, there are rules, and divide and conquer is the most obvious among them. The more ground a team can cover the better. Food trucks and festivals are notorious for long lines and tedious waits. 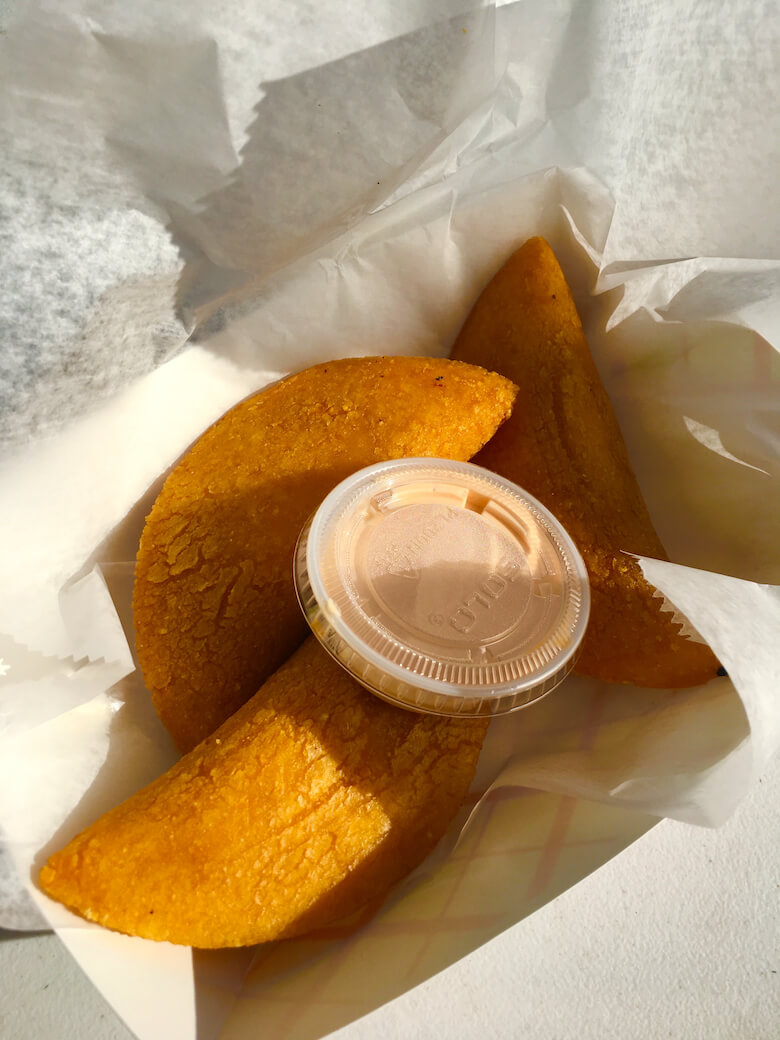 The other cardinal rule to effective food-trucking is: Order wisely. Consider every truck a restaurant, every order an exemplar of what the truck can best produce. Ask questions. Vendors will happily hand over what they consider to be their best wares. Also, arrive early to avoid missing the most coveted items. (Consider this new mother, who is now constantly struggling to find enough time, guilty, in this instance, of violating the final rule, which resulted in several missed noshing opportunities herein.)

After paying a suggested donation of $5 apiece—the event is sponsored by the Flanders, Riverside, Northampton Civic Association, or FRNCA—we forged three paths, with Adam heading off toward Mexican pastures with my son in-tow, me toward pastry and pasta, and Dan toward pulled pork. Converging at a picnic table that was dappled with late-afternoon light, we dissected what we had, quite literally, brought to the table.

Katie’s Food Truck served a passable—albeit overly sweet—pork empanada and parmesan truffle fries. The Eat Me, Drink Me truck was out of its grass-fed burgers, and, worst blow to my heart, the Blondie’s Bake Shop truck had run out of the macaroni and cheese grilled cheese sandwich. They served up, instead, macaroni and cheese sans grilled bread and a sweet ham and cheese scone. 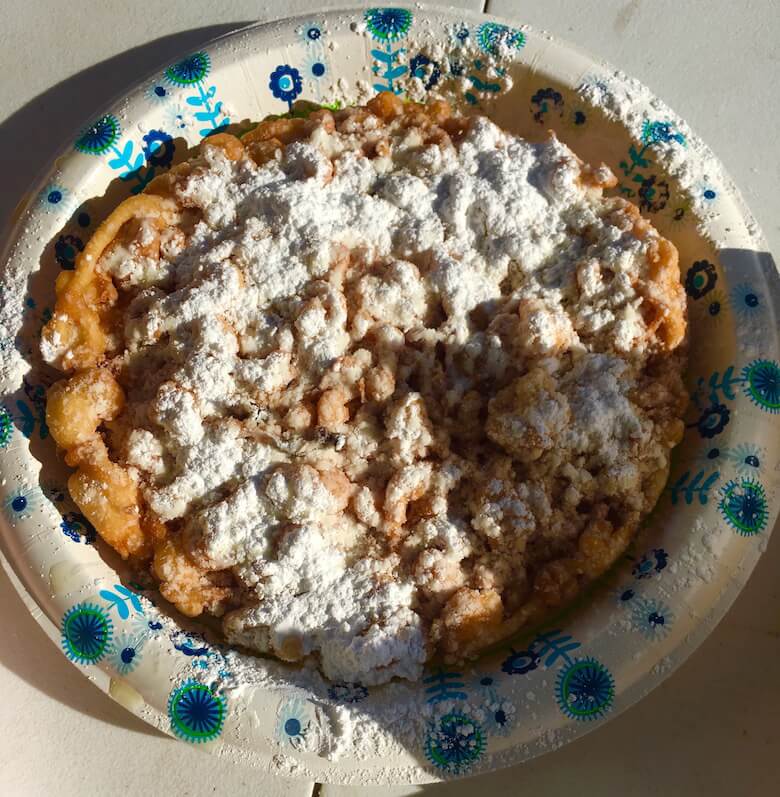 Aji Authentic Mexican Cuisine’s tacos were good—full of competing textures, well seasoned, ample in size. But their empanadas, stuffed with potato and meat and served in a deep-fried corn dough pocket, were what food memories are made of. Lime Jarritos soda is for special occasions only, and a perfect empanada on a perfect May afternoon seemed like special occasion enough.

Strangely, it was the de rigueur fry truck, Fry Daddy, which won hearts and minds across the board. A long line snaked to a sign boasting fried Twinkies, Oreos, and other fair fare. Surely I expected no culinary genius to arise from the depths of, say, the deep-fried Rice Krispie treats I ordered. And yet! The golden, crunchy dessert impressed even Chef Ben’Ous. Better still was a standard-issue funnel cake. The oil was hot and clean, the finishing butter pooled just in the right places to catch the confectioner’s sugar, creating a paste atop crunchy-yet-chewy dough. All at once, I recalled a childhood food vendor at a local ski mountain, Annie’s Fried Dough, which sold the same stuff for $2.

That sad, sweet nostalgia—a romance with the past, time’s undoing—brought the festival into sharp relief. Telescoped through my funnel cake I saw an eight-year-old girl wipe the dust of sugar onto black ski pants before taking one more run, sun descending into a February evening. Is there really any other way to eat, after all, than with one’s heart?

Eat your heart out at Edible East End’s own Food Truck Derby on Friday, August 11 from 4:oo to 7:00 p.m. Early bird tickets are on sale now through June 11. Purchase yours online here.