Industry Standard’s late night eats are so good, you’ll actually want to stay up past your bedtime. 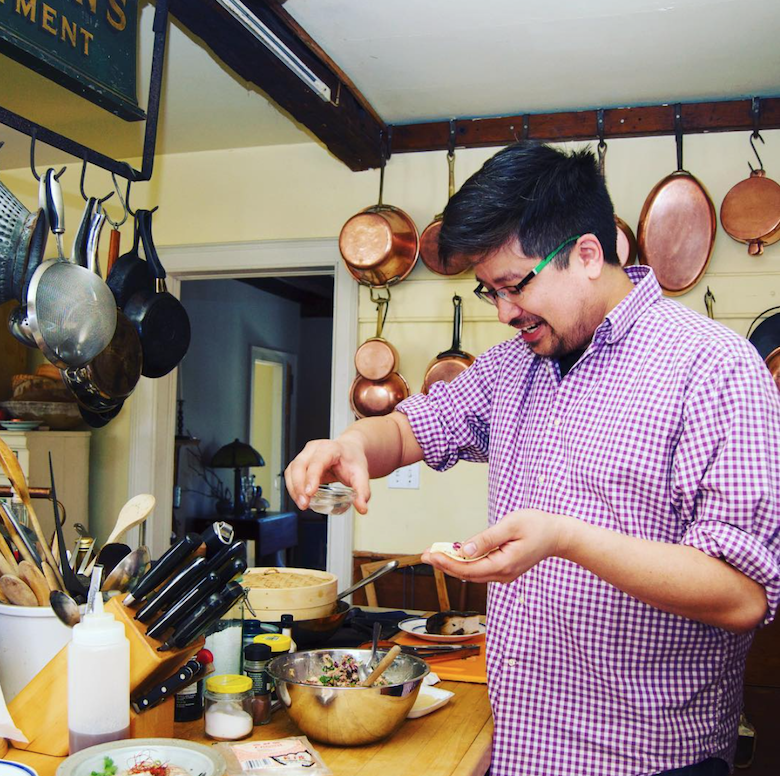 “I get bored easily,” says Chef Greg Ling, when asked why he changes the menu so often and so drastically at Industry Standard in Greenport. He alters it once or twice a week, based on whatever he wants to eat, or something he’s read in the newspaper. In addition to the fresh menu, specials change daily. The afternoon I visit, seared squid salad, wontons and spring rolls are all up on the chalkboard.

Ling, who is of Chinese descent, grew up in Philadelphia, and that pedigree, as well as his appetite and reading, inform his cooking. There are Philly cheese-steaks on the menu—served on bread that’s delivered from Philly once a month—because Ling doesn’t like the bread up here for sandwiches. There’s also a delicious and affordable burger, as well as many variations on KFC (Korean Fried Chicken).

Owner Brian Villanti’s concept for Industry Standard was for it to be a bar (there’s a changing list of 24 beers on tap) with food served late, catering to folks who work in the service industry. Going into their second summer season, they’re still adapting and working out kinks, but they plan to serve food until midnight this summer. The aim is to keep prices on the low end, with most dishes under $20. They’ve garnered a loyal crowd of regulars who come in for lunch and dinner.

“We’re not an upscale farm to table place, but we do try to use local produce and seafood in season,” says Ling.

Last summer, Ling would walk down the block to Latham’s farmstand in the parking lot to get fresh ingredients for the changing Parking Lot Salad. Industry Standard is involved in the local community in other ways, too. They’re currently featuring photographs on their walls by Madison Fender, a local photographer, from her recent trip to Vietnam. For the opening week of the show, called Vietnow, Ling changed the menu to one inspired by Vietnamese cuisine. “We even got rid of the burger, which we were a bit nervous about, but no one complained,” says Ling. He plans to do more theme weeks, including inviting his mom up to curate a menu.

Ling first came out to the North Fork from Philly back in 2001 to work at the Shady Lady Inn. He also spent time working at the Frisky Oyster and the Riverhead Project. He’s currently launching a food truck business with Rosa Ross, former owner of Scrimshaw restaurant. Called the Red Dumpling Truck, it will be parking this summer at private parties, vineyards, and possibly in Ross’s driveway, conveniently located next to the very popular Lavender By the Bay in East Marion. They plan to offer tacos, bahn mi, bowls, burritos, Japanese soft serve ice cream, Taiwanese shaved ice and Philly-style water ice.

You may also find the Red Dumpling Truck parked out back at Rocco’s Caddy Shack, the new incarnation of Skipper’s restaurant, also owned by Villanti (aka Rocco) and overseen by Ling, which plans to open in June. The menu will be a bit more upscale farm to table, but with Ling’s signature international and unconventional flair. A restored fire truck will be permanently parked out back next to the fire pit, and other food trucks will stop by for special events.

If you follow Industry Standard on Instagram, you may even catch one of their secret menus (Shhh!) or special nights like all-you-can-eat Fried Chicken Roulette or Fryday (fried chicken specials on Fridays). One recommendation is not to go there with your heart set on something particular, because as the menu will tell you, things change. Instead, go with an open mind and an empty stomach. You will not be disappointed.