In East Hampton, a hidden gem reminds us that breakfast really is the most important meal of the day. 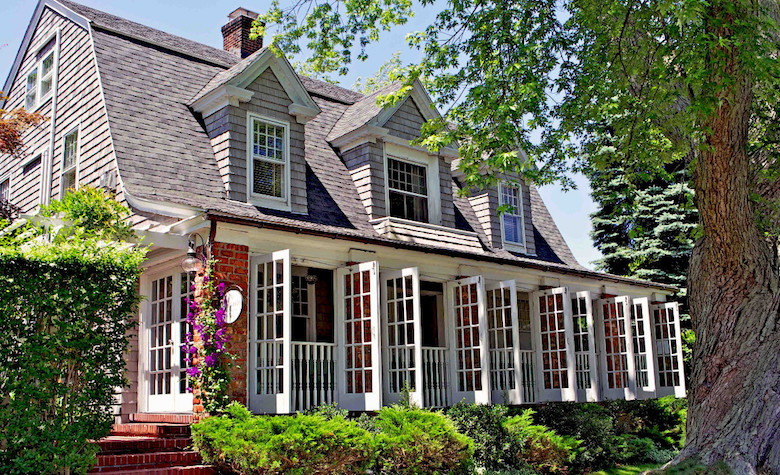 I first learned of East Hampton’s Mill House Inn, and of its chef Carolyn Stec, only a few weeks ago, when a chef-friend of mine pointed me in her direction. The inn was, inexplicably, off my radar. Tucked behind privacy greenery before the underpass on North Main Street—windows from the main building’s front façade face the iconic East Hampton windmill—the Mill House Inn is, at first, unassuming. A side door feeds into a concierge desk and then a small, precise dining room. It’s a low-ceilinged, intimate space, housed in a building that was erected in 1709.

Intimacy is part of the experience. The hotel-cum-eatery boasts 10 guest suites and a separate cottage. The three-pronged service, concierge, and restaurant team consists of married couple J and Courtney Silhan and Chef Carolyn Stec. A graduate of Rhode Island’s Johnson and Wales with experience in food and beverage (she previously worked in hospitality on a 121-passenger elite cruise ship that traveled to all seven continents) Stec arrived in the Hamptons four years ago at the behest of East Hampton native and fellow Johnson and Wales graduate Courtney. Stec never left. 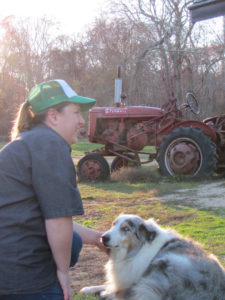 The small dining room, with its hewn beams, planked floors, and fireplace, looks like a page out of a New England fairy tale. A tray with Southeast Farms’ yogurt and accouterments arrived, along with a caveat from Chef Stec: “We love making our own yogurt,” she told me, “but we are not able to keep up with production due to the popularity.” She needn’t have explained. The thick, tangy, Icelandic-style yogurt, served with fresh fruit and Stec’s granola, could have been a meal in and of itself. 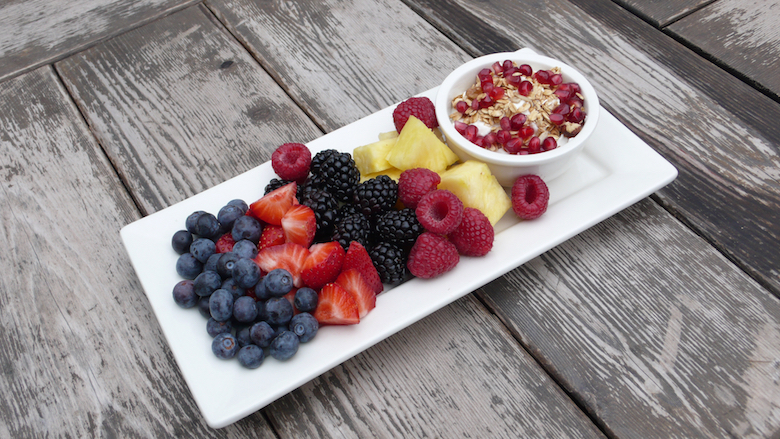 Of course, it wasn’t. The Mill House Inn serves one meal and one meal alone: Breakfast. And before you dismiss the most important meal of the day out-of-hand, please keep in mind that this is not any iteration of breakfast that you have ever seen before. Care to enjoy your Balsam Farms vegetable hash on your deck overlooking East Hampton’s flowering trees? Go right ahead. Prefer a packed picnic basket, complete with jerky made from Cromer’s finest beef? Chef Stec will oblige. A menu with no prices (breakfast is included as part of the hotel stay and is open only to hotel guests) devotes a full page to coffee, categorizing the good stuff and marking the available cuvées with a hand-written x. Available selections change often.

Pancakes resembling scones came dusted with cinnamon. Stec mills the local wheat for them herself. Two perfect orbs—Iacono poached eggs—quivered over toothsome veggies, which we ate with Stec’s homemade sriracha and J Silan’s habanero hot sauce. “We work as a team,” Chef Stec told me of the creative process. “A lot of our items are the brainchildren of our owners that we adapt to be local.” Owners Gary and Sylvia Muller met at Montauk’s Memory Motel in 1995 and thus enjoy their own Hamptons history. They now facilitate Chef Stec’s vision for local, seasonal cuisine served in one of the prettiest places I’ve been in the Hamptons. The Inn (and, of course, its restaurant) is open 365 days a year and enjoys a loyal following throughout the seasons. And I can certainly see why. The Mill House Inn is the underdog that you really, really want to win. 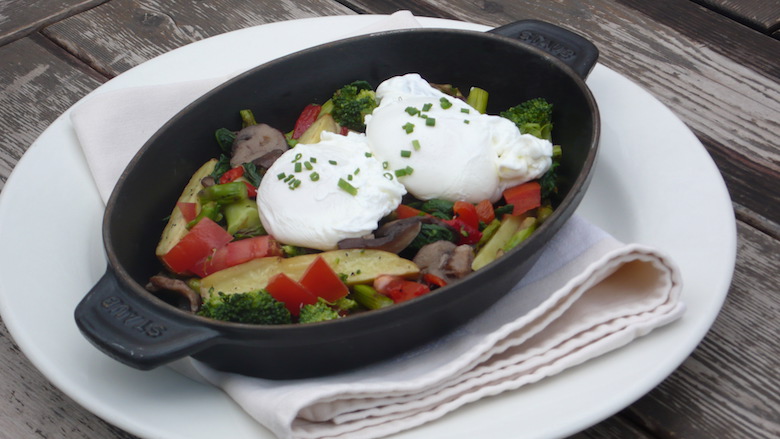 Poached eggs from Iacano Farm arranged atop a bed of Balsam Farms vegetables.

“It’s so frustrating, because a lot of the other chefs in the area have not come in,” Chef Stec told me. The term “breakfast” reads like a loaded gun to chefs who don’t take the morning meal seriously enough. But “breakfast” also doesn’t do the Mill House Inn or Carolyn Stec justice. What breakfast joint serves homemade jerky for your beach picnic? Seven selections of coffee? Pancakes from local wheat that they mill themselves?

I can’t think of a single one.

The Mill House Inn is open to guests 365 days a year. Rooms begin at $250 a night in low season. The Inn sources its product from Balsam Farms, Carissa’s Breads, Quail Hill Farm, Amber Waves Farm, Gooddale Farm, Iacono Farm, and other local purveyors. Breakfast, snacks, and beverages are included with each stay.