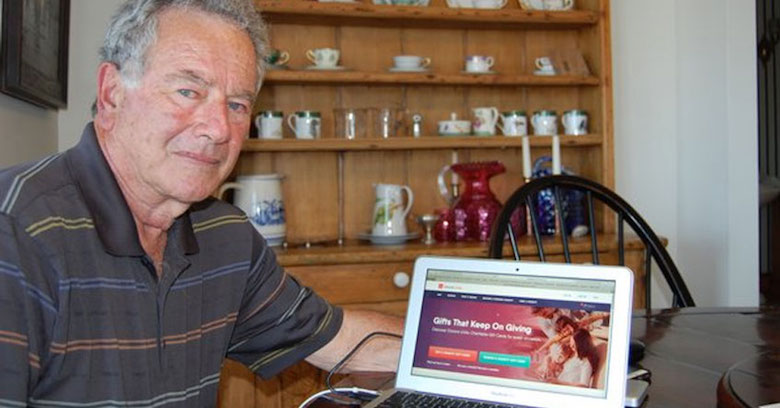 Every year, charitable giving becomes easier for the general public to participate in—clothing brands are almost expected to donate a portion of their sales to a cause they care about, parties that were once just for the fun of the dance now double as fundraisers, and coat drives are held at bars that offer free drinks in exchange for a jacket drop-off.

Enter this month’s launch of Donors Unite, Levine’s new charity gift-card-giving website that aims to revolutionize charitable giving in the Hamptons and beyond. Claim codes allow individual, everyday people—along with businesses, wedding and party planners—to give to charity in someone else’s name and present them with that gift in the form of a personalized card.

This, he says, is a plus for businesses who want to communicate their commitment to social responsibility through client appreciation and employee recognition gifts, but it’s also a meaningful way to reach the heart of someone special.

“Everyone gives gifts on certain occasions throughout the year, but many gifts are, in fact, purchased out of obligation,” Levine says. “Why not skip the obligatory bottle of wine and gift to charity in someone’s name instead?”

Fundraising became a passion for Levine after he received an outpouring of love and support from the community after his son Josh passed away, leading him to found of All For The East End, which granted over $100,000 to East End charities. Through his work with the foundation, Levine came into contact with many nonprofit leaders based on the East End, and learned that they were tasked with what he describes as “an almost impossible task of trying to increase their funding to support their respective missions.”

“Traditionally, charities are all funded through access to the same pot of money, and while that pot is large, about $375 billion last year in the U.S., it is basically finite,” Levine says. “If you look to raise additional funds for charities, all you are doing is reallocating money from one charity to another. In effect, it puts charities in competition with each other.”

His solution: provide a charity gift card that givers can present to friends and loved ones that offers access to more than a million U.S. registered and IRS-approved charities.

Because Levine’s late son shared his passion for healthy living and education, he has a soft spot in his heart for the East End Edible School Garden Program, which help students build gardens and greenhouses in order to become more familiar with where their raw food comes from.

“We’re training children to be compassionate, as many of these gardens donate food to food pantries,” Levine told Edible East End. “Imagine the impact if individuals and businesses start to use them as a substitute for material gifts. Just .01% would amount to over $1 billion in new funding for charities like the school garden program.”

That’s just one of 1.5 million nonprofits and charities available to choose from in the Donors Unite database.

As a bonus for the charities and nonprofits involved, the service will offer a low transaction fee for donations, faster automatic deposit times, marketing materials, and priority placement on the “Give Where You Live” search engine, and removes administrative responsibilities from the charitable organizations by providing all tax letters to donors.

As for how far this can go, Levine believes that within two years’ time, they may be able to drive $10 billion to charities, an enormous number and yet only a fraction of what he says is a total of over $1 trillion spent last year by Americans on material gifts for national holidays.

“While people may not think of themselves as philanthropists, we are all concerned about the health of our own communities,” he says. “Much of the proceeds from charitable gift cards will go to fund the missions of the smaller community based charities that do so much of the heavy lifting.”