Formerly chef and partner at the Petulant Wino, Lenny Campanelli has found a new home in Mattituck. 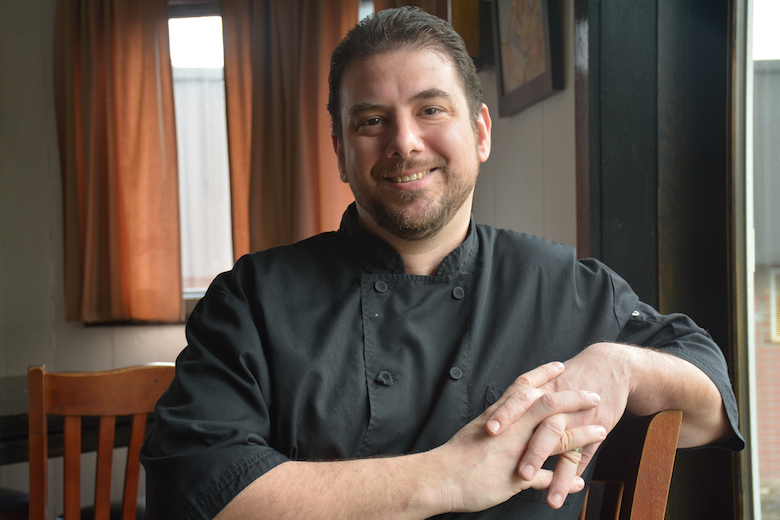 It’s Monday afternoon and aMano‘s dining room is dark, as Lenny Campanelli searches for the light switch. The chef has only been on the job for about a week and is still familiarizing himself with the inner workings of the Mattituck eatery.

Having just left the recently closed Petulant Wino, where he was the chef and a partner, Mr. Campanelli explained why it was time to walk away from the acclaimed Aquebogue restaurant.

“When we opened Petulant, my wife allowed me to take all the time I needed,” he said. “Now my wife is starting her own business—she’s a veterinarian—so I needed to be able to offer some time for her to do her thing. It was just time to divest from that and move on.”

As aMano’s new head chef, Mr. Campanelli is purposely taking his time to feel his way into the position.

“Whenever you go to a new restaurant, you don’t want to upend what they do,” he said. “You don’t want to go in there full on fire and change everything around. I’m still in that exploratory stage, seeing what sells, what doesn’t sell and trying to figure out where I can add my touches.”

Already a popular eatery with a strong following, aMano’s traditional Italian menu includes wood oven fired pizzas and homemade pastas made with local ingredients. Mr. Campanelli has no plans to change any of that.

Mr. Campanelli does plan to incorporate more seafood on to the menu, especially during the upcoming spring and summer seasons.

“I want to introduce more of what you would call that Mediterranean diet,” he said. “We’ll get some lobster pastas on there, some seafood dishes, and seafood pizzas. It’s the season for it, so let’s play and have fun with it.”

With all that’s available on the North Fork, Mr. Campanelli is already working on his shopping list.

“I try to be as local as possible,” he said. “For produce I like to use Satur Farms, we use Catapano and Goodale Farms for their cheeses, Southold Fish Market and Braun Seafood Company for fish and seafood. We get our olive oil from Paumanok Vineyards, they import it from their farm in Spain.”

Now living in Port Jefferson Station, Mr. Campanelli originally grew up in Levittown and credits his Italian upbringing with instilling his love of cooking.

“This is the first time that I’m cooking Italian professionally,” he exclaimed. “Most of what I’ve done has been influenced from all over, especially at Petulant, where I really tried to grab a bunch of different flavor profiles.”

Mr. Campinelli prefers seasonal cooking and recently joked with a friend that he was finally returning to his Italian roots, which included Sundays spent cooking with his grandmother.

“Both my grandmother and my mother were cooking influences, but not a lot was written down,” he said. “It was all spur of the moment, stand in front of the stove with some good ingredients and put them together. A good chef is supposed to write it down, but that’s not Italian cooking. Italian cooking is just a feel for the oven and a feel for the stove.”