Getting Pickled at the Brine Bar in Cutchogue

Backyard Brine settles into a new home on the North Fork. 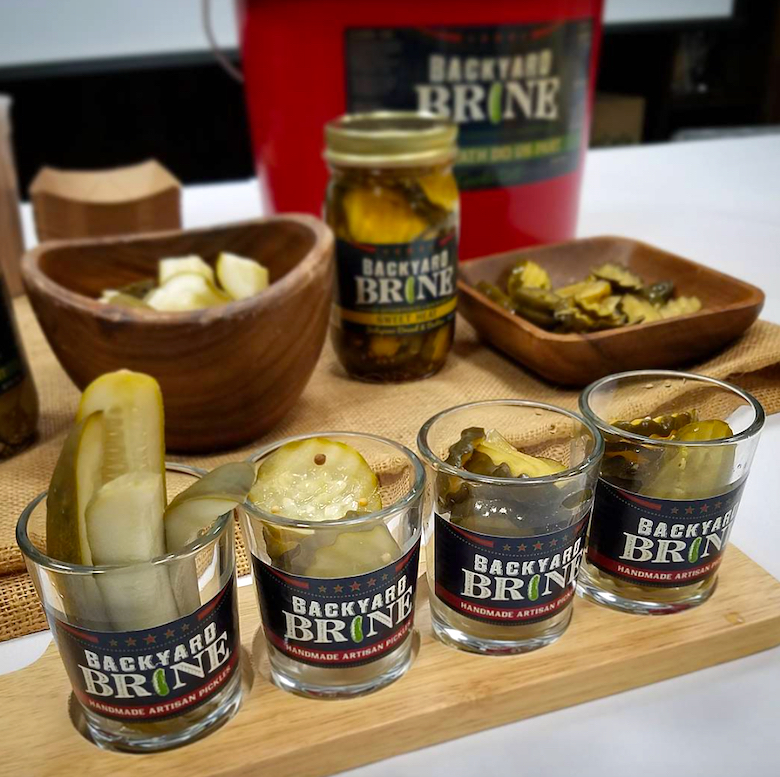 Backyard Brine, the pickle company that started out of Randy and Cori Kopke’s home kitchen and backyard in Northport years ago, has come a long way in a short time. Their products are now distributed throughout the Northeast and up to Canada and found in Whole Foods and the Nassau Coliseum. While they’re focusing a lot of their efforts these days on distribution and placements in stores and restaurants in NYC and beyond, they’re also settling in to their home base on the North Fork and hoping to have customers coming to them soon as well.

The business has been a labor of love—literally. The married couple launched it around Valentine’s Day in 2014, making favors for Cory’s brother’s wedding, which you can still buy today, the lovingly named Dill Death Do Us Part and We Go Together Like…Bread and Butter pickles. They wanted to create an artisan product using local and natural ingredients and their own hand-crafted flavors, with no weird chemical dyes. They thought the concept would fit in well with the winery and craft beer scene on the North Fork, and they officially launched the business at the Stony Brook Business Incubator at Calverton. “We were there at the right time,” Randy said. “Timing is everything.”

By March 2016, they graduated from the Incubator and leased space in Cutchogue to be closer to the farms growing the vegetables they use. Lyle Wells grows 6 acres of cucumbers for them in Aquebogue. In addition to the ten flavors of shelf-stable, canned cucumber pickles they produce for sale on their website and distribution, they also make fresh, lacto-fermented cucumber pickles, as well as pickling other vegetables like cauliflower and brussel sprouts, nuts, and quail eggs from Fiesty Acres.  They also sell just brine to restaurants to use for marinating meat or making into cocktails.

The grand opening of the Brine Bar was this past fall, a celebration that was mostly a thank-you to the contractors and chefs who’ve helped and supported the growing company. It’s a wood paneled space at the entrance to their mostly concrete and stainless steel production facility, where they hand-pack all their products. There’s a wooden bar with stools, lots of wooden barrels and chalkboard menus listing all pickle-themed food, like a dill pickle chowder served with bread.

The plan is to have private events, parties where they release new flavors, pickling classes, and maybe even a pickle club. They’re also taking the Brine Bar on the road, for example to the Bay Breeze Inn in Jamesport earlier this spring, where they hosted a takeover with a pickle themed menu of food and cocktails. The event was such a success that the chef there is going to keep some of the pickled items on the menu. On Thursday, April 20, they collaborated with Noah’s On the Road to have a taco night at the Brine Bar.

“Collaboration with other local businesses is what keeps it fun and creative, and keeps us going,” said Cori.  There are plans in the works for events with Greenport Harbor Brewing and Long Island Spirits. Although the Brine Bar has no set hours as yet, keep an eye out for the pickle sign to be out on Cox Lane on the weekends as the season progresses and stop in!