Taking the Plunge into a New Way of Farming: A Fish Farm Grows Off the East End of Long Island

Manna Fish Farms will begin farming fish in federal waters off the coast of Southampton in 2018. 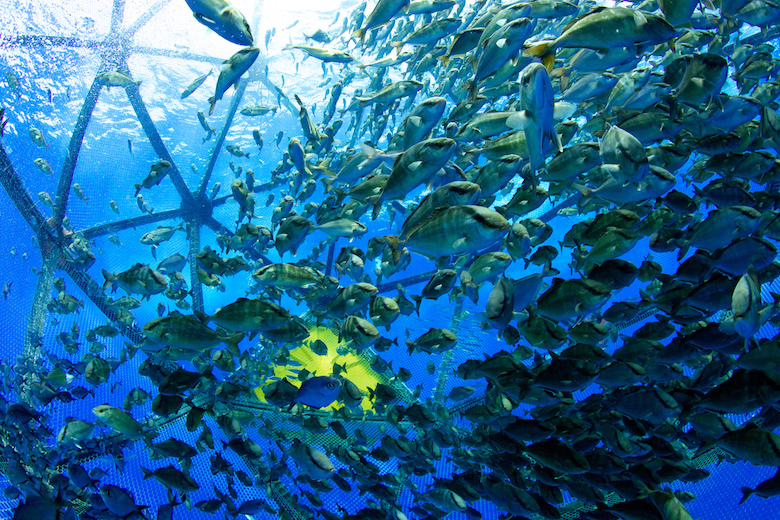 Manna Fish Farms will begin farming fish in federal waters off the coast of Southampton in 2018.

The eastern end of Long Island is already a cornucopia of fruit, vegetable and flower farms. Now one East Quogue woman is taking the plunge, literally, into a completely different type of farming: offshore marine aquaculture.

Just what is aquaculture? NOAA, the National Oceanic and Atmospheric Administration, defines it as the “breeding, rearing and harvesting of plants and animals in water environments like ponds, rivers, lakes and the ocean.”

While fish farming is already taking place in local waters, Manna Fish Farms will become the first company to farm fish in federal waters off the East Coast of the United States.

Working with marine experts from Stony Brook University and aquaculture experts from the University of New Hampshire, Manna Fish Farms plans to farm wild striped bass in floating aquapods eight miles off the coast of Southampton by 2018.

“We’re starting this April, spawning our first batch of fingerlings,” Manna Fish Farms CEO and founder Donna Lanzetta said. “When we put them offshore at the site, the fingerlings will be 12 to 14 months old.”

Hard to believe that with thousands of miles of federal waters available, the U.S. is just now getting into ocean fish farming. In fact, Manna Fish Farms could become the first company to ever farm federal waters, depending on the schedule of Hubbs-Seaworld Research Institute, which has applied to farm fish off the West Coast, near San Diego.

“They filed ahead of us, so we’re watching their project and wishing them luck,” Lanzetta said.

According to Lanzetta, the U.S. is actually behind in ocean marine aquaculture, already a multi-million dollar industry overseas. 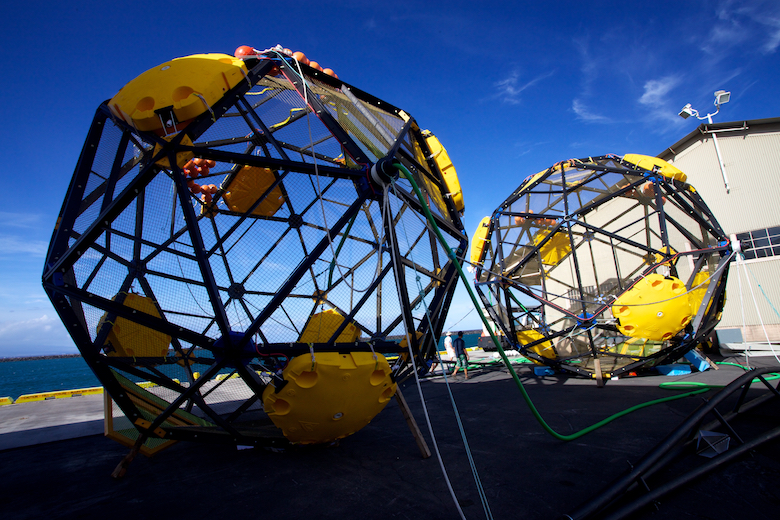 Ocean fish farming is made possible by the use of aquapods.

“The U.S. has an exclusive economic zone that runs from three to 200 miles around our country,” Lanzetta explained. “In 2016 the United Nations reported that the U.S. has the greatest potential in the world for offshore farming in that zone, but we’re way behind the rest of the world.”

According to the NOAA-owned website Fishwatch.gov, 90 percent of the seafood consumed in the United States is imported.

“We’re exporting the great percentage of our wild fish and importing cheaper, farmed fish primarily from Asia. That’s just the way the economics are working right now, but it’s crazy!” Lanzetta said.  “At the same time, 19 percent of the protein consumed in the U.S. is seafood and the UN said we’ll need to double our aquaculture production just to maintain our current levels of consumption.”

“We don’t want people to eat less fish,” she said. “But we can’t continue to strain our coastal and inland resources, and it makes the most sense to move out into the ocean, where farming can be done in a natural environment, utilizing the energy of the ocean.”

Manna Fish Farms will operate off the coast of Shinnecock Bay, in about 145 feet of water. The offshore aquaculture facility will consist of several aquapods and/or pens.

Like gigantic submersible balls, each aquapod will be constructed out of galvanized steel, with copper mesh panels, allowing the water to freely flow through, while containing the fish.

Manna Fish Farms has chosen to farm wild striped bass as their first fish harvest. The fish will initially be spawned at Multi-Aquaculture Systems Fish Farm on Napeague, before being released into the offshore pods in 2018.

“We genetically matched our brood stock to the striped bass offshore here on Long Island,” Lanzetta said. “If they were to get loose they may have more survival challenges in the wild, but if other fish eat them there’s not going to be any detrimental effects. They’re not going to taint the stock.”

Implementation of the farm will follow a four-phase approach. Phase one will deploy the first aquapod, to be stocked with approximately 28,000 striped bass fingerlings. Phase two will deploy two more pods. By phase three they hope to have 12 pods in the water, with a total of 24 pods deployed by phase four.

A system of mooring lines, chain buoys and anchors will secure the aquapods to the ocean floor. The farm will be fitted with buoys and warning floats to avoid any accidental contact with passing watercraft. Mechanized flotation devices will raise the pods to the surface for feeding, harvesting and maintenance and sink the pods deeper below the surface during storms. 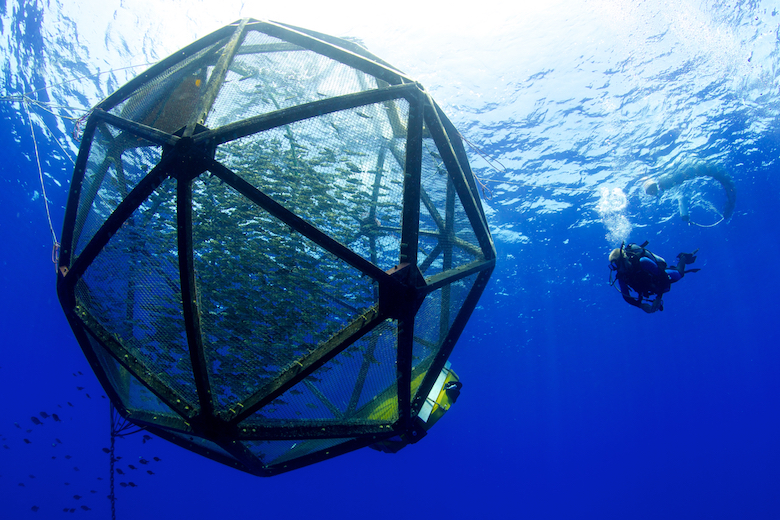 “Our goal is to be the first organic certified ocean farm in the United States,” says Donna Lanzetta, CEO and founder of Manna Fish Farms.

The entire operation will be automated and operated by remote control, including the gigantic feed buoy that will be situated in the center, with each pod attached to access the feed.

“Our goal is to be the first organic certified ocean farm in the United States,” Lanzetta said. “In order to do so we have to maintain a certain level of quality control. We do not plan to use antibiotics and our feed will have no genetically modified components.”

Manna Fish Farms already has several scientific advisers and universities onboard to assist in the project, including the University of New Hampshire School of Marine Science and Ocean Engineering, the University of Rhode Island, New York’s St. Joseph’s College and the New School.

“We’re working with them to see what effect the project will have on the coastal ocean in regards to chemistry and biology,” Gobler said. “I love the idea of more aquaculture in the region. The more we do to create our own sustainable stream of seafood, the better off we’ll be, and this is just one of many steps that can be taken to fill that gap.”

Others like members of Long Island’s fishing industry are taking a more guarded, wait-and-see approach to the project.

Bonnie Brady, executive director of the Long Island Commercial Fishing Association, is watching the project with a protective eye on local fishermen and the local product.

“I’m not a big fan of farming fish personally, because we have plenty of wild-harvested striped bass,” Brady said. “Since I represent commercial fishermen we support wild harvest, plus I’m a little leery of keeping fish in cages. We’ll see how this progresses, let’s just hope they stay in their cages and don’t get sick.”

“It’s a free country, as long as they abide by the laws, I’m not 100 percent opposed to it,” Reed said. “We’re businessmen, they’re businessmen, we’re all trying to make a living.”

Lanzetta is also sensitive to the fishing industry and has already taken some of their issues into consideration, such as harvesting.

“One of the great parts of our plan is that we’re not going to flood the market with product, we don’t have to bring it all in at once,” she said. “Our goal is to bring it in after the commercial fishermen are done. We might start a little bit sooner and there may be a little overlap, but that’s our goal.”

When it comes to marketing her farmed fish, Lanzetta says education is the first step for any consumer.

“We’ve come a long way with our farm-raised seafoods, so I don’t think it’s safe to categorize it just as farmed vs. wild,” she said. “There’s farmed, imported, which I think we should stay away from. Then there’s U.S. farmed now that could possibly be certified sustainable, so we have to look at each offering on its own.”

“I’d like one of the pods to be used as a pod-to-dish program, that perhaps local chefs would subscribe to to get a certain quota of our fish,” she said. “We don’t want to be a big, high-end gourmet product, the goal is to feed the average person a healthy, sustainably produced seafood.”