Beyond Twigs, Sticks and Berries: How One Woman is Promoting Plant-Based Diets, One Dinner at a Time

Plant-based diets often get a bad rap when it comes to taste and flavor. Montauk’s Gwendolen Bokine is working to change that. 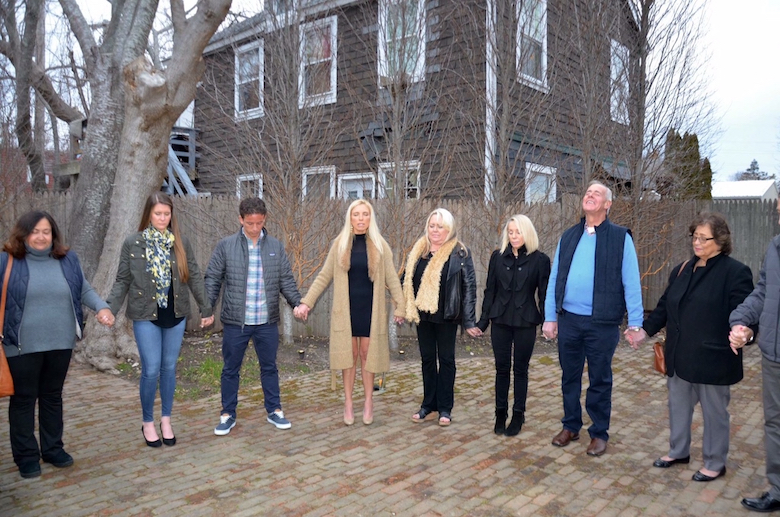 While a vegan diet is considered a healthy lifestyle choice, it is rarely considered fine dining.

Gwendolen Bokine of Montauk wants to change that by demonstrating how a vegan or plant-based diet can not only be good for you but also be delicious.

A professional health coach, Ms. Bokine trained at the Institute for Integrative Nutrition in Manhattan and is certified in plant-based nutrition at Cornell University. She helps clients raise their food awareness by implementing healthier habits for eating, activity and stress reduction.

“I have many friends who say they want to eat healthier, but what does that mean, a carrot and a celery stick?” she said. “It was really about what to eat if you want to eat plant-based and have it be delicious.”

A vegan or plant-based diet means absolutely no animal products. No meat, no fish, no eggs, no dairy, nothing from an animal.

“The dinners started as a meatless Monday at my house,” Ms. Bokine explained. “My friend Cynthia and I began cooking dinner for each other once a week, and one night she made a vegan dinner that was delicious. The next week I made one, so it became a ‘vegan off.'”

“[I said,] this should be done in a restaurant,” said Ms. Bokine. “People need to taste this, so I went to several Montauk restaurants, but they weren’t interested.”

The friendly cooking competition pushed them to be creative, making flavorful vegan dishes. These soon turned into dinner parties where they shared their creations with friends interested in a plant-based diet.

“Cynthia made this vegan stroganoff that tasted just like beef stroganoff, but instead of beef she used cauliflower,” Ms. Bokine said.  “I told her this should be done in a restaurant, people need to taste this, so I went to several Montauk restaurants, but they weren’t interested.”

Eventually, Ms. Bokine got the Montauk Yacht Club to host one of her plant-based dinners and it took off from there. She found a kindred spirit in Dopo La Spiaggia‘s chef and owner Maurizio Marfoglia, who used to cook in a vegan restaurant and whose own mother is vegan.

“I am not now vegetarian, but I was when I was younger,” Mr. Marfoglia said. “This was like going down memory lane and being a chef, we like to try different things.”

The first dinner at Dopo in East Hampton was very successful, with Ms. Bokine adding meditation to the mix.

“I wanted to make it a complete dining experience,” she said. “At the Institute, we had discussed bringing down our circadian rhythm and relaxing with meditation, particularly before eating. As the sun sets and cools, our own bodies and minds should do the same.”

After January’s first plant-based dinner, Ms. Bokine planned another one at Dopo in March. Her “Beyond Twigs, Sticks, and Berries” dinner was promoted as a way to eat heart healthy without compromising taste. Guests were promised a savory five-course plant-based meal that would leave them more than satisfied.

On the night of the dinner, guests were greeted by Ms. Bokine, as she played hostess and answered questions. After a half hour cocktail party, she led the group of about 30 out to the restaurant garden for a quick meditation session. Any awkwardness soon evaporated as everyone joined hands, closed their eyes and listened as she led them through a brief relaxation session.

Once inside diners were seated and the first course served. 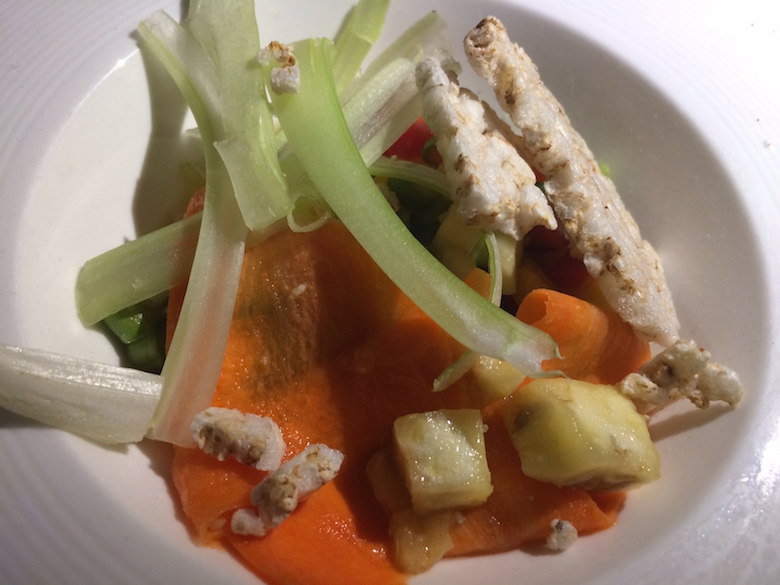 The antipasti or appetizer was a vegetable ceviche, consisting of carrots, celery and pineapple chunks, with rice croquette crumbles. The dressing was a mix of citrus fruit juices, creating a light palate pleaser.

Next was the soup, a rich and hearty tomato gazpacho made with fire roasted red and yellow heirloom tomatoes. 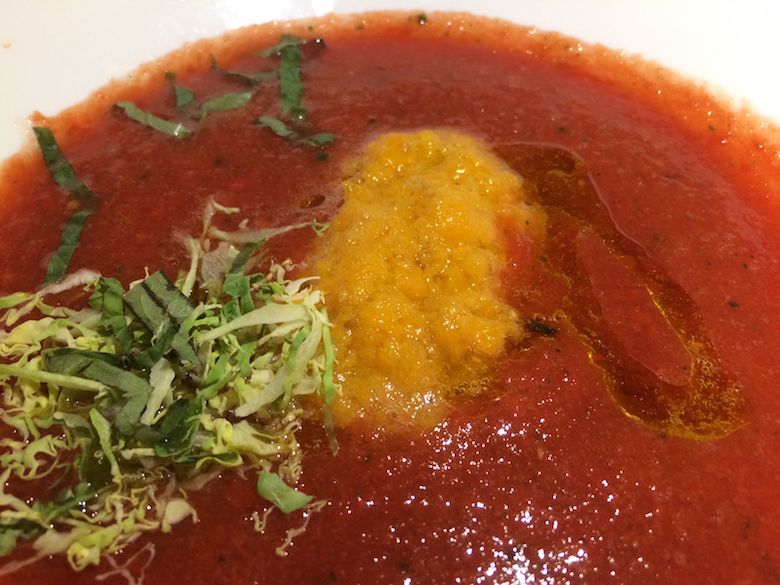 The third course was a plant-based ‘spaetzle with red beets and Parmigiano finto.’ Spaetzle is a soft egg noodle popular in Germany, Austria, and Switzerland, while finto means ‘fake’ in Italian. 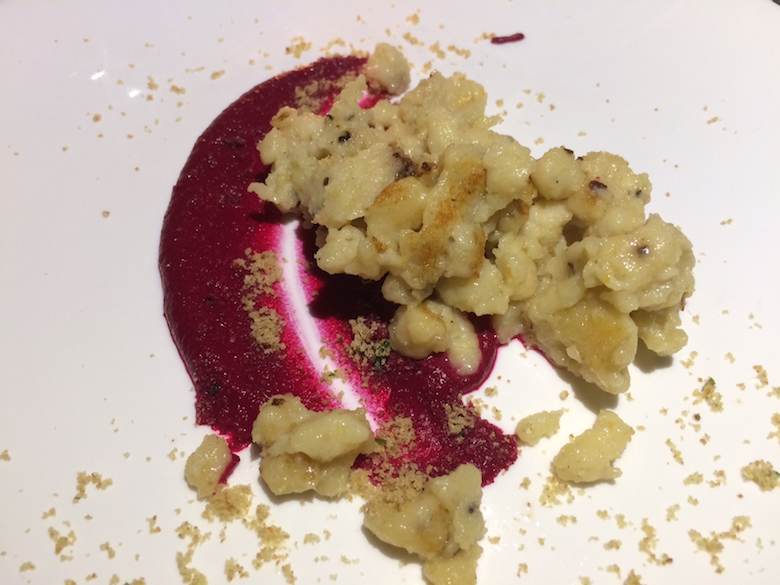 “This one was made with sweet semolina flour and water, then ground through a grater,” Ms. Bokine said.

The beets were prepared to resemble tomato sauce, while the Parmigiano finto was nutritional yeast mixed with salt, to taste like cheese.

“Nutritional yeast is very cheesy,” Ms. Bokine explained. “If you want popcorn with that cheesy taste, put that on it. I’ve used it for mac and cheese instead of using cheese.”

The spaetzle was tasty, while the beets made a surprisingly convincing tomato-like sauce. The Parmigiano finto had a salty, powdery texture that made for a decent cheese substitute.

The next course, the seitan scaloppine, was served with white wine, capers, basil and a red and green kale salad. 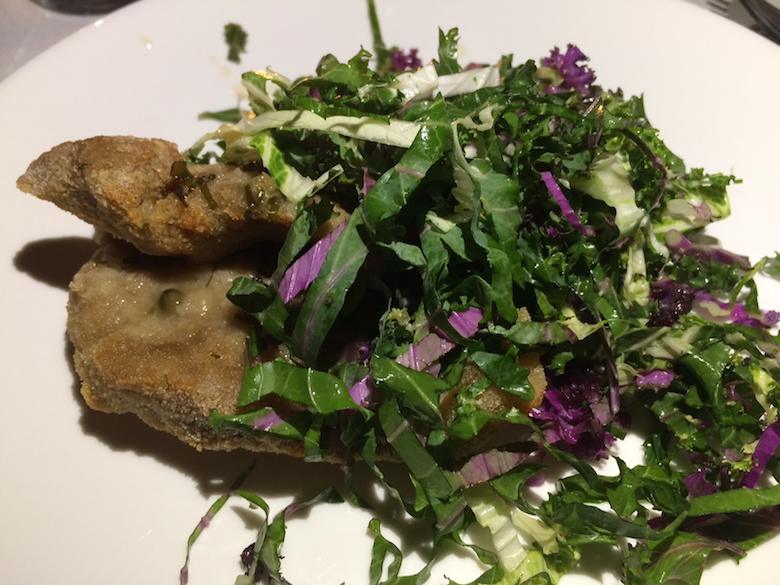 A murmur ran through the dining party, as the plates arrived, because what appeared on everyone’s plate looked just like real veal scaloppine.

Seitan is a food made from gluten, the main protein of wheat. High in protein, it can take on the flavor and texture of meat when it is cooked, making it a popular meat substitute.

“Maurizio mixed wheat gluten, nutritional yeast, a quarter cup of water and liquid aminos for the salt flavor,” Ms. Bokine explained. “Then instead of using an egg, he used a vegetable egg substitute. Then you pound it like you would a veal cutlet.”

The seitan scaloppine was delicious, tasting exactly like a veal cutlet. The entire process of eating it resembled that of a thick piece of veal, from the carving to the taste, which was meaty and chewy.

“I enjoyed the treatment of the seitan dish,” said Anthony Coron, of North Haven. “You can’t get it on the South Fork; if I could find these dishes in a restaurant, I would definately order them.” 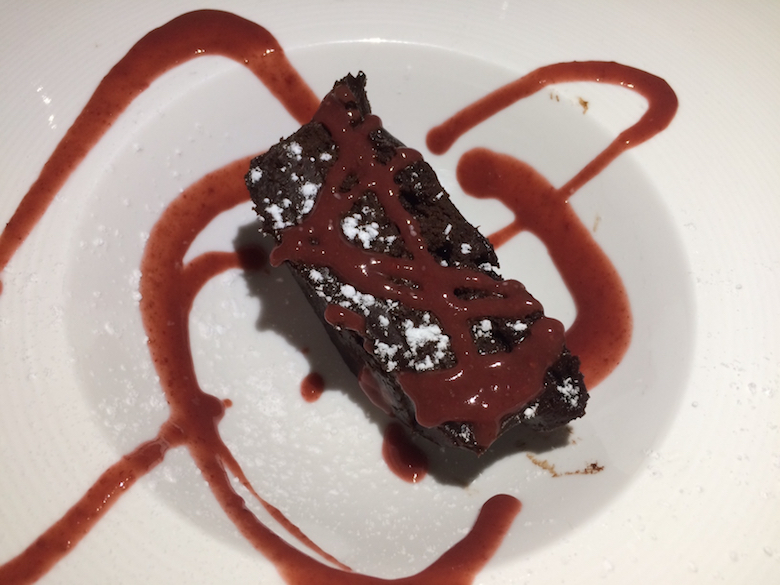 Dessert was a flourless and eggless dark chocolate cake with a berry culis or puree, that was divine. Diners raved about it as the meal winded down.

‘I thought it was very different and very good,” said Barbara Russo of Montauk. “My favorite dish was the spaetzle, but the dessert was outstanding. It didn’t even taste vegan, and I really enjoyed it.”

The next “Beyond Twigs, Sticks, and Berries” dinner will be held on May 4 at Sen Restaurant in Sag Harbor. For more information visit gwennieonthego.com.