When North Fork farms give you apples, make cider—or just drink it at Riverhead Ciderhouse. 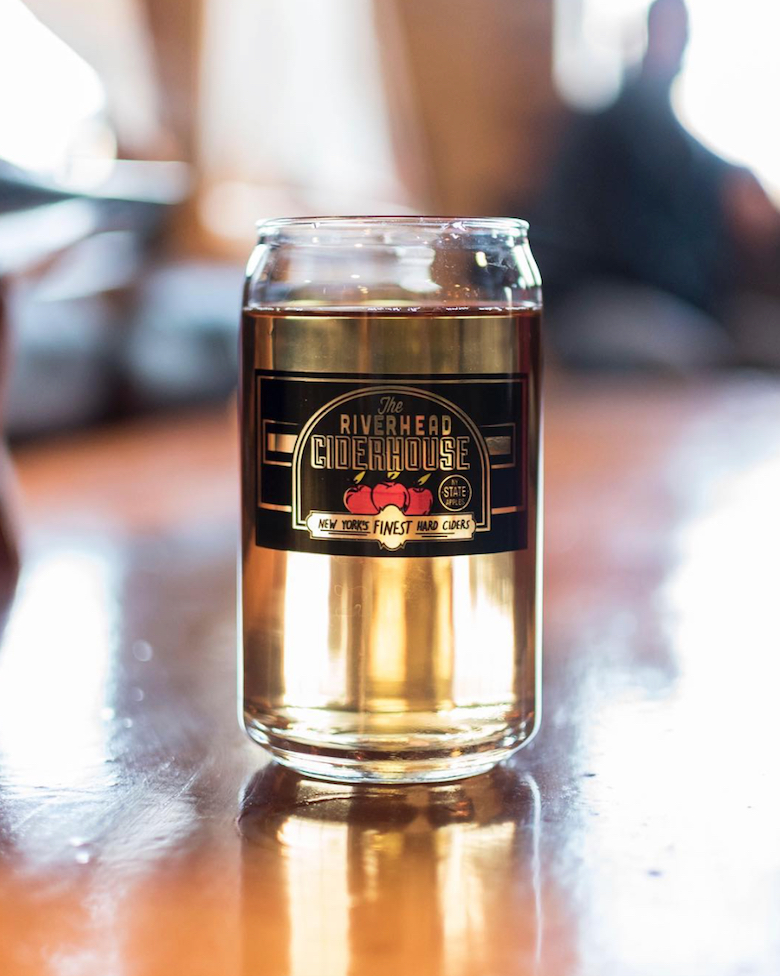 It’s always satisfying when things come full circle—like when a guy from the Hudson Valley starts making cider at Long Island’s newest and biggest cider producer, The Riverhead Ciderhouse, which just opened at the end of March.

That guy is Greg Gove, and he has been making wine on the North Fork since 1985, the early days of the Long Island wine world.  His resume is dotted with big names on the scene: Hargrave, Pindar, Laurel Lake, Peconic Bay. Listening to him talk about the folks he’s worked with, and alongside, makes the North Fork wine world sound like a large, tight-knit family.

Family is a theme with Greg. When he’s not consulting, making wine under his own label, Race Wines, or getting the Ciderhouse operational, he helps out at Greenport Wines and Spirits, the fine wine shop owned and operated by his wife, Deb. If you’re lucky enough to find him on the floor, he might steer you towards any grape that starts with the letter V.  He likes the unusual and underrated viogners, vernacchias, verdichios, verdejos, vinho verdes, vouvrays and vermentinos.  Winemakers and apprentices stop in the shop often to chat with Greg and talk shop. It’s usually an animated discussion about yeast strains, temperature variations, and other tricks of the trade.

Greg’s path to winemaking came via a background in, and love for, science and nature. As a high school senior in the lower Hudson Valley, he originally wanted to go to forestry school upstate but then developed an interest in Environmental Biology and Chemistry. After getting a double major in both fields from SUNY Cortland, he worked for Columbia University as an environmental science researcher. The projects were varied and relevant to a lot of the recent controversy surrounding global warming, in addition to acid rain pollution and PCB contamination of the Hudson River. As part of that job, he spent time at sea off South Africa and South America monitoring the effects of global warming on the oceans.

Though Greg loved his work in the lab, he had a friend who worked at Hargrave Vineyards and told him about the fledgling wine industry. Greg sent his resume to the six wineries then-operating on the North Fork. Alex Hargrave was interested in monitoring the dissolved oxygen content in red wine and wanted someone with no wine experience to teach him his way from scratch, and Greg was hired. His first house in Cutchogue was a short walk from the Nassau Point causeway, and that’s where he really first fell in love with sailing.

Greg also fell in love with his wife when they both worked at Pindar. They moved to Peconic, and he experimented at home with brewing beer. He had a batch of stout fermenting at the top of the stairs, but the airlock got clogged with bits of hops, and the whole thing exploded, freeing the dark sludge to ooze down the stairs.

He made two different ciders when working at Peconic Bay Winery—True Companion and True Believer—but the scale of the operation at the Riverhead Ciderhouse is much bigger.

“I’m looking forward to a new set of challenges that this project offers and working with a visionary like John King, his wife Sinead, and the competent creative people in his organization,” says Greg.

The Riverhead Ciderhouse will be sourcing local apples and fresh-pressed juice from local orchards such as Breeze Hill and Surrey Lane orchards, both in Southold. They’ll be using local strawberries, raspberries, and other fruits to create different cider styles. They also plan to make a Perry, a cider made from pears. Hard cider has been the fastest growing alcoholic beverage in the country for the past several years.

Another difference between this operation and previous projects Greg has worked on is the size of the budget and access to resources. At both Laurel Lake and Peconic Bay, Greg helped choose and design the winemaking equipment. The Ciderhouse is a project of John King, of J. Kings food distribution, and he has the ability to invest in a long-term vision. In 2014 John enlisted Greg to join the team to start planning this ambitious undertaking. Together, he and Greg decided to install an expensive, large volume, forced carbonation bottling line. Not only will they use it for their cider, but they will be able to carbonate and bottle for other local wine producers.

When the owners of Peconic Bay Winery decided to close their operation, Greg produced several wines for himself so he could release it under his own label—and “Race Wines” was born. It was named for his love of competitive sailing. He continues to buy grapes from the Peconic Bay Winery’s vineyards and is now using the Lenz Winery’s facilities to make a 2016 chardonnay.

When Greg’s time at Peconic Bay ended, he considered setting up an oenology program at Dowling College, but he missed making wine.

“To be honest, I would rather be up on a ladder, checking tanks, stacking barrels and monitoring fermentations.”