Sweet’tauk Lemonade is made with a third less sugar than its competitors—and three hundred times more care. 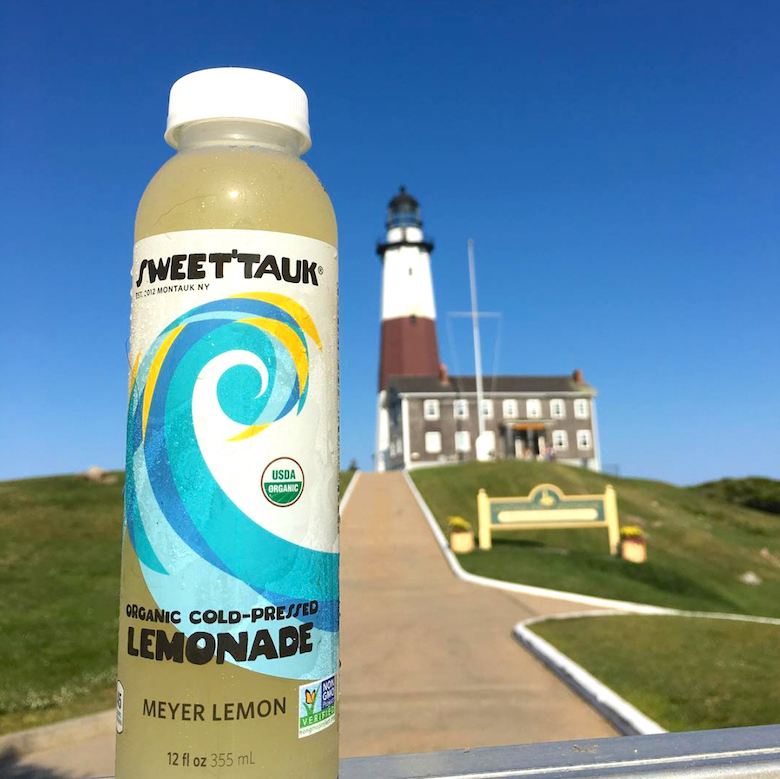 Lemonade, healthy? You wouldn’t think so, but thanks to Deborah Aiza of Montauk, founder of Sweet’tauk Lemonade, a healthy new version is being created and sold to stores throughout the North East region.

Fresh lemonade made the “old-fashioned” way oftentimes has just as much sugar in it as it does lemon juice. Commercial brands can be even worse, having anywhere from 23 grams of sugar to 35 grams of sugar per 8-ounce serving. These numbers are not good, considering the recommended guidelines for good health suggest no more than 20 grams of sugar per day. More and more Americans are changing their diets, taking in less sugars, fats and carbohydrates, so why can’t one of America’s favorite drinks be healthier too? This was the question Deborah Aiza asked herself back in 2011, and she set out to do something about it.

Deborah, who lived in East Hampton for close to fourteen years, became a year-round Montauk resident five years ago. It was around this same time that she came up with the idea of making and selling a healthier version of lemonade.

And so it begins // come on down to #sweettauk located on 34 S Etna Dr for our opening day! Open from 11am till 9pm 😋 #montauk #memorialdayweekend #sweettaukme #ditchplains #eastend #lemonade

“If you think about lemonade, especially homemade lemonade, it’s like a rite of passage,” says Aiza. “It’s part of everyone’s childhood—having lemonade stands. Everyone drinks it, and it hasn’t kept up with the way people are changing their diets and their palate. So I started making a much less sweet lemonade, and I started selling it at the farmers market in Montauk, and the response was great. It was what people wanted. And we just grew from there.”

Making a fresh product made a big difference, especially since many companies are still using concentrates. Sweet’tauk Lemonade is cold-pressed using fresh Meyer lemons, and the least amount of sugar possible, only 11 grams. As of 2016, a no-sugar lemonade has been developed, which uses just a touch of Stevia, a sweetener and sugar substitute extracted from the leaves of the plant species Stevia rebaudiana. It produces a very tart lemonade that has a nice, natural sweetness to it. Because such a microscopic amount of Stevia is used, it does not have a bitterness or aftertaste to it.

“You get used to not having the sugar,” says Aiza. “You get to a point where you can’t tolerate all that sweetness anymore.”

Aiza has worked in the food industry her entire life, between working in restaurants and at one time owning her own catering company. She’s also into eating healthy and using what’s available to her on the East End.

“The local food movement is a big deal,” she says. “Eating close to home, supporting local growers and farmers—we’re lucky that we live in such a bountiful area. I love to cook real food.”

Deborah would pick the blackberries for blackberry lemonade at local farms, or she would buy peaches from the peach farms on the North Fork. Her fresh lemonade became a hit, and as luck would have it, back in 2011, a “forager” from Whole Foods happened upon Sweet’tauk Lemonade at the Montauk Farmers Market. The forager’s job was to find new products to market exclusively to Whole Foods. She was quite impressed with the lemonade, and suggested to Deborah that she start looking for a distributor. Deborah describes that moment like “winning an Oscar.” There was a big learning curve, but Deborah set her mind to doing everything she could to get her product out there. She had to learn how to pasteurize the product, how to bottle it and how to distribute it.

What started out as a grass roots operation, with Deborah delivering the product herself to local mom and pop shops, has now grown tremendously. In 2015, Sweet’tauk Lemonade was launched in the New York Metro Area of Whole Foods. As of 2016, the product was expanded to the entire North East region. For Deborah, it truly is a dream come true.

Montauk is what inspired Deborah to create her lemonade. You won’t see lemons displayed on her label, instead it’s a graphic image of waves, capturing the essence of Montauk.

“I wanted to communicate the spirit and adventure, and evoke that feeling that you have when you come to a special place, and Montauk is a special place that is unlike anywhere else,” says Deborah.

Currently there are four flavors: Meyer Lemonade, Pink Hibiscus, Strawberry Mint, and Zero Sugar Lemonade. Sweet’tauk lemonade is 100% organic, and is a wonderful source of electrolytes, antioxidants, and Vitamin C, and is also considered a kidney cleanser. Because there is less sugar, you actually feel refreshed after drinking it.

From May through September, Deborah still runs her little shop on South Etna Avenue in Montauk where her fresh squeezed lemonade as well as her bottled lemonade is sold along with fresh lobster rolls.