What can we learn by collecting and examining the forgotten culinary objects of the East End’s past? Everything—according to collector Chris Pickerell. 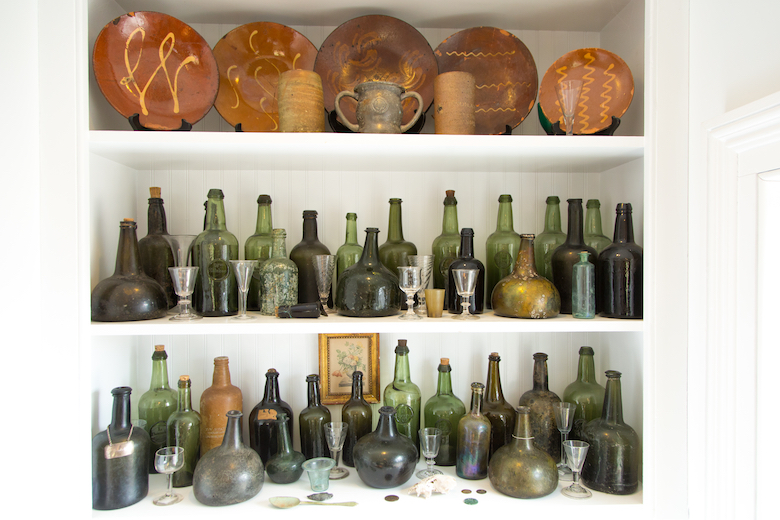 Call me a collector, a hunter gatherer, or even a hoarder. In truth, I’m probably a little bit of each of these things—but I prefer to think of myself as a curator.

The roots of my collecting are deeply embedded in my psyche in a way that I can’t escape. The most likely cause of this is the influence of my grandmother, who died tragically when I was about 15. She meant so much to me that I can’t even express it; I think about her often. I was lucky enough to spend summers with her exploring the wilds of the Catskills. She was always up for a hike in the woods and was famous for gathering all sorts of things along the way: seed pods, fungi, lichen, rocks and more. In typical 70’s fashion, she would often combine these materials into something for display. If we found any creatures, they would be put in jars for observation and identification using the stack of Golden and Peterson guides always on hand. As I think about it now, these early years definitely started me on the path of discovery that lead me to a career in science. 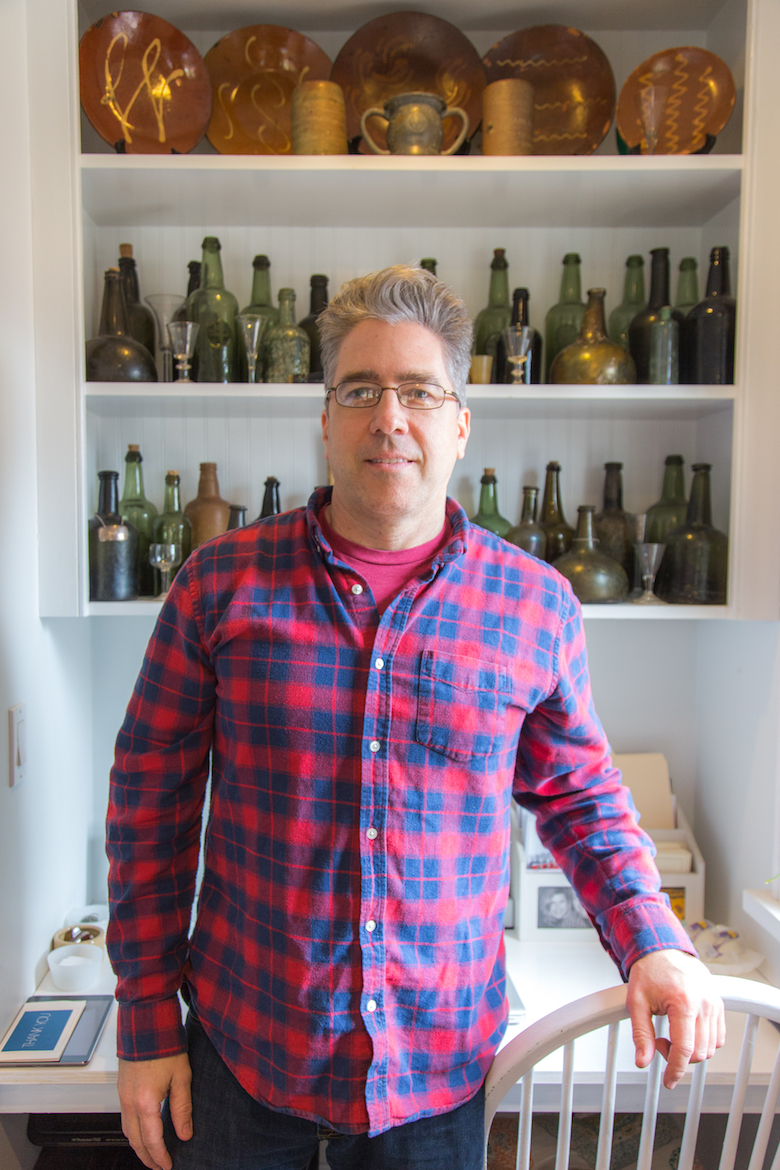 Chris Pickerell poses in front of a small selection of his collection.

As an adult, the things that I collect are varied, but most fall into one of two categories. The first group is fairly practical, including materials that can be used to build things such as bricks, stone, wood, metal and even fasteners. Anyone who knows me will tell you I’m always designing or building something, even if only in my mind. I need to work with my hands. In my perfect world I can use the things that I gather to build things in my shop, but in truth far more things enter my shop than will ever leave it.

As the son of a boat builder, I have a reverence for wood and cannot pass up even the smallest usable pieces wherever I find them. This is especially true for salvaged wood from houses and boats which can impart history into the things I create. I consider this a unique and important form of recycling.

The second, and much more diverse group of things I collect, are objects that have either historic or natural science significance—at least to my mind. This category include ceramics, bottles, pipes, Native American artifacts, shells, and any type of historic detritus or archaeological fragment. Although some of these objects clearly fall within the category of traditional “antiques” and may have a monetary value, I see them more as living pieces of history that can help to tell a story about those who came before us on this land. When I handle these objects I feel a sense of connection to the people who owned and used them. If curated and displayed properly, the story of these everyday objects, discarded centuries ago, can be revealed and the past and present can be connected in a way that shines a light on both. 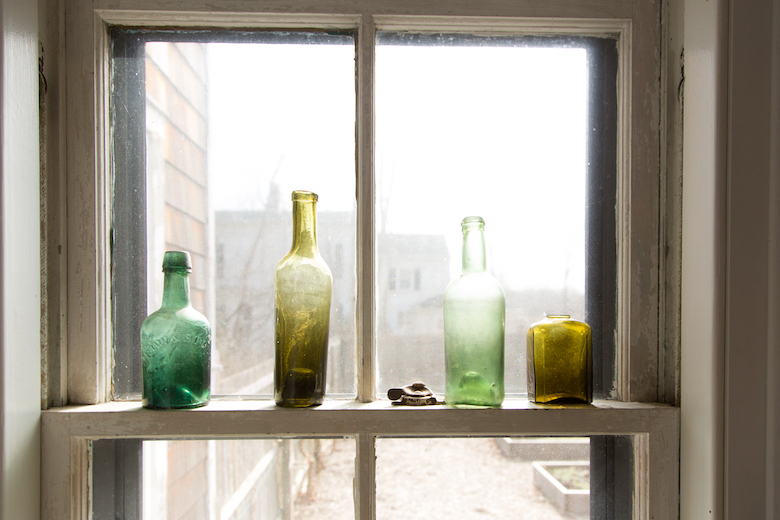 Chris has found many of the bottles in his collection while SCUBA diving around Shelter Island.

One of my first and largest collections includes historic ceramics. These are mostly utilitarian redwares and stonewares that would have been essential in every home. In my collection, I have everything from small fragments to whole display pieces. Many pieces are cross mended from fragments, but this only adds historic value in my mind. Very few people know that Greenport was the site of an important pottery beginning in the early 1800’s. Over the last 15 years, I have amassed a large collection of this pottery found in dirt crawl spaces, dug in yards, purchased at auction and even collected by SCUBA diving in Sterling Harbor. Made from clay dug in local pits, fired in kilns fueled with local trees and sold out of oxcarts traveling the dirt roads of the North Fork, this pottery is packed with history.

Another passion of mine is collecting bottles. Some of my first pieces were found while SCUBA diving near Shelter Island, where I found bottles that dated back as early as the 1840’s. From there I ventured into much earlier “blackglass” examples dating from the 1600’s into the 1800’s. For whatever reason, I really connect to these, maybe it’s because I enjoy a drink now and again. Regardless of the reason, I can’t get enough. One curious thing is that you won’t find this type of bottle in any antique shop, but they can be found in the ground or at the bottom of a pond or harbor if you know where to look. There are surely hundreds out there to be found; it’s just the 5-25 feet of dirt, mud or water that separates them from collectors like me. 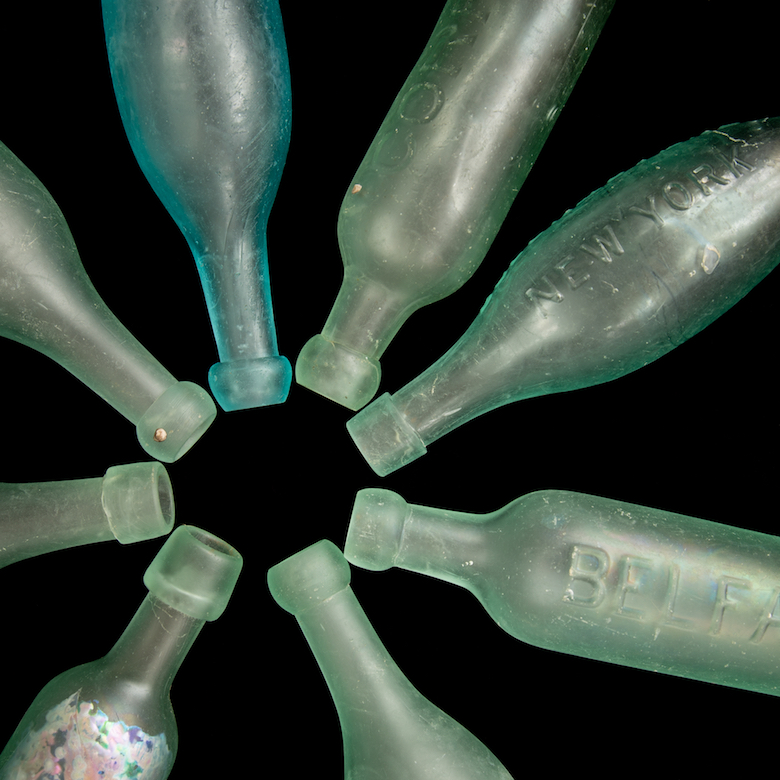 Keeping with the drinking theme, I have also tried to collect period “wine” glasses to go along with some of the bottles I have. I have not been as successful in collecting these. One problem is that drinking vessels are almost never found intact in the ground and when they do come up for sale at auction they can be very expensive. It is interesting to note that there were different glass styles for each type of spirit and the size and shapes of these glasses changed markedly over time. Once you understand this, you can readily date a glass within a 20-30 year period. Since these were all handmade—and actually blown—they all have interesting quirks that add to their character.

Clearly, I am not an archaeologist by training, but I share some common tendencies: to dig in the dirt; to explore with my hands; to appreciate anything old no matter how seemingly insignificant. Whenever I get a chance to do a little poking around in my yard or under an old home, I take the opportunity. Many things, including much of my pottery collection and some of my bottles, have been found this way. 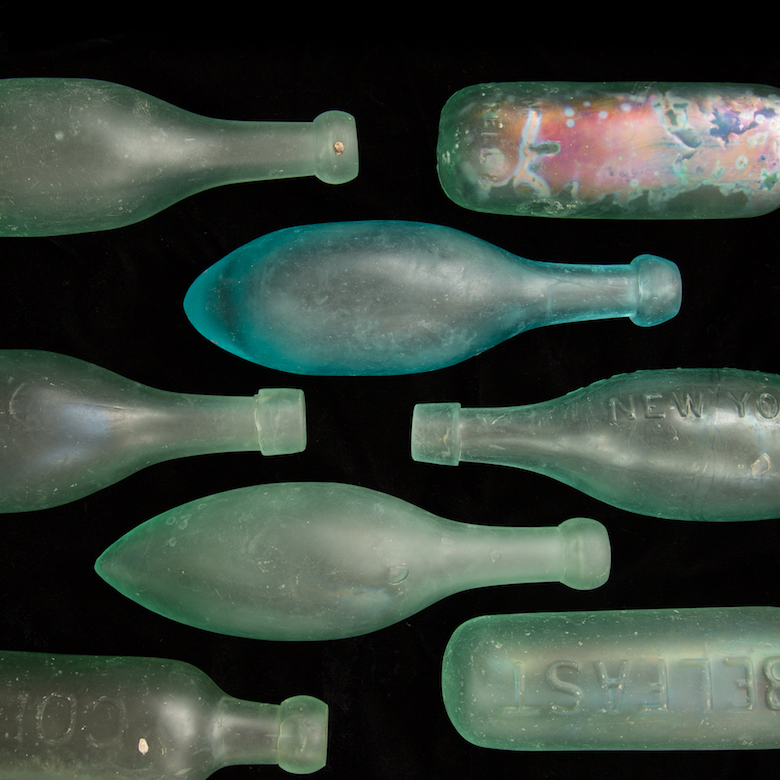 A dig in my yard a few years back yielded a treasure trove of artifacts that most would have looked past when considered one fragment at a time, but as I found additional pieces and was able to assemble nearly complete jugs, pots, pipes and bottles, I had a museum worthy assemblage of early 18th century artifacts that showed how the early residents of my property lived. I have much to learn from this collection and for now most of it is organized by type in boxes awaiting my attention.

In what was a real eye opener for me a few months ago, I helped my 86 year old grandfather clear out his home in Huntington just before it was sold. I jumped at the chance to retrieve anything from this house where I spent so many memorable holidays with family. Although I would obviously take anything of use, I was especially interested in finding something that could connect me to my grandmother. The antiques and heirlooms had long been spread throughout the family, but there were still things in the basement to be picked through. 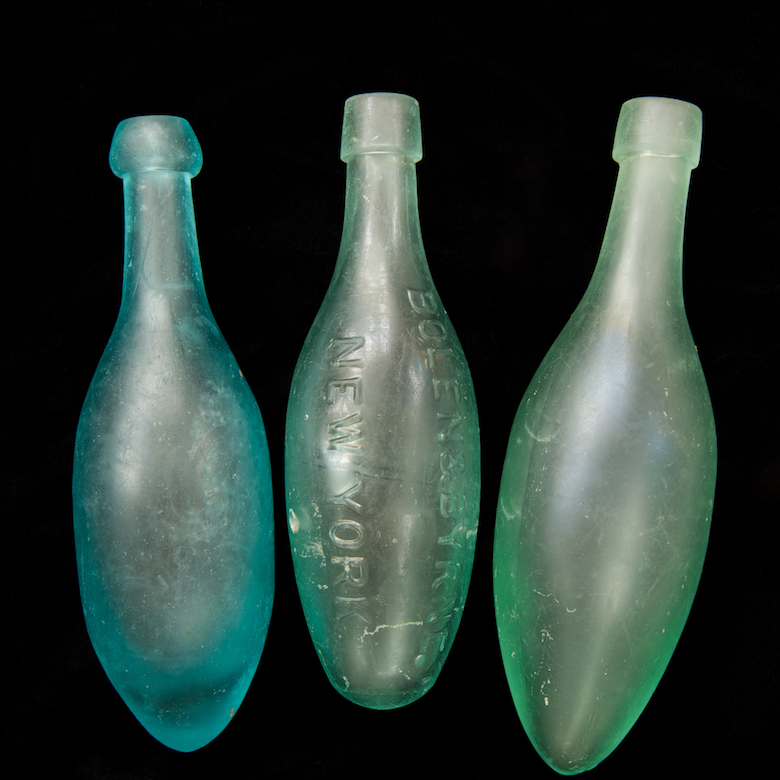 One seemingly insignificant thing that I found was a small set of metal and plastic drawers my grandmother had put together many years ago. She had collected and methodically organized all manner of objects, fasteners and small fragments of random materials for some future project that never happened. As I opened each drawer to see what she had gathered my peculiar inclination to gather and collect came into focus; looking into those drawers was almost like looking into a mirror. This is exactly what I do.

I know that no amount of collecting will ever fill the void left by the loss of my grandmother, but it does give me some solace knowing that we were alike in this way. I hope that by seeing some of the things that I have gathered, you will have a better appreciation for simple objects from an earlier time that just might strike a similar chord in you. 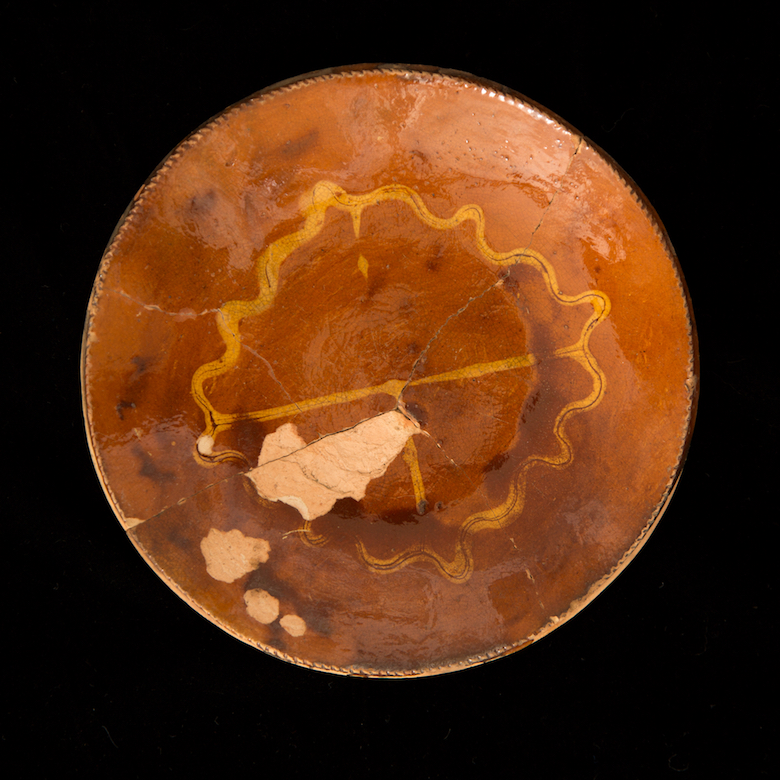 Although not from the Greenport pottery, this plate from the mid 1800’s was made on the shore of Huntington Harbor very near where I was born and is the first piece of redware that I found under a home. I’ll never forget the sight of seeing part if it sticking out of the dirt under a home in Cutchogue. To me, it was like peering into King Tut’s tomb! 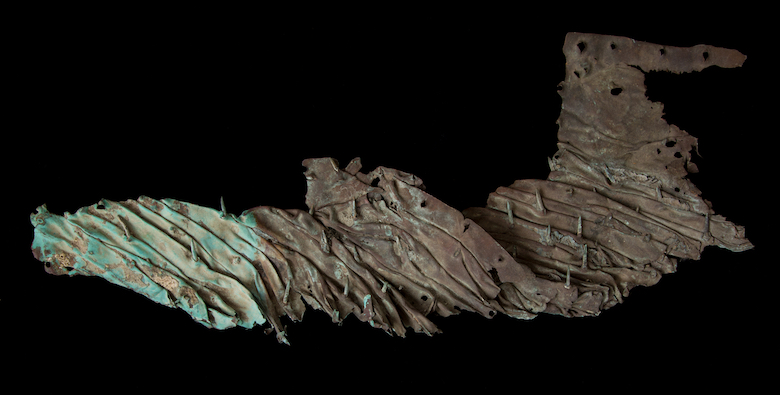 Found while diving for bottles between Shelter Island and Greenport, this copper sheathing compressed like an accordion was found half-buried in the sand next to a boulder in more than 10 feet of water. This hunk of metal tells the story of how early ships were protected from boring worms in the 17th and 18th century and is also evidence of a violent encounter between the ship and a submerged rock.

Spoon dug in the yard 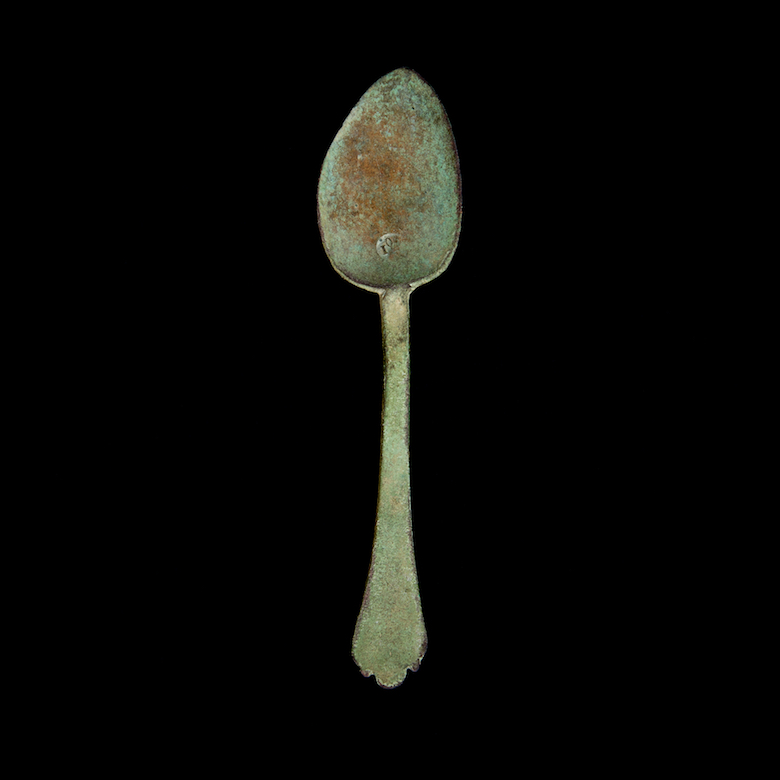 Although I have found many things in my yard, this spoon from the late 1600’s speaks to me most of all.  Obviously belonging to a right handed person it shows decades of constant use. Coincidentally, my family on my mother’s side lived next door to the lot where I currently live during the late 1600’s and could have shared a meal with the person who used this spoon. 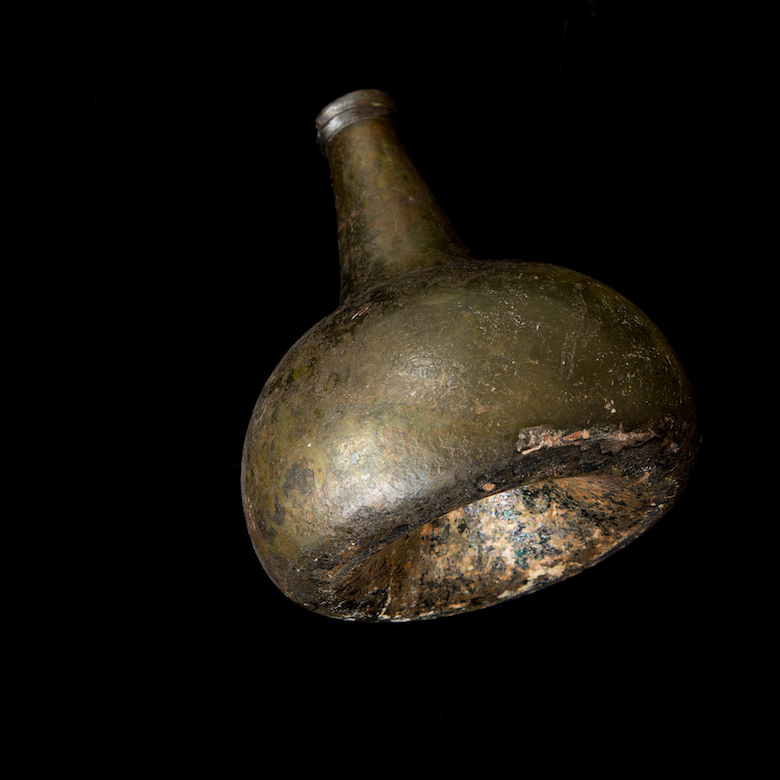 This circa 1720-1730 Dutch onion bottle, was purchased by me at auction from a person who purchased it from an antique dealer at the Brimfield Antique show several years ago. The bottle, originally along with several arrowheads (sold separately to someone else), was dug up in the 1930’s at the Native American settlement along the Forge River in Mastic Beach. 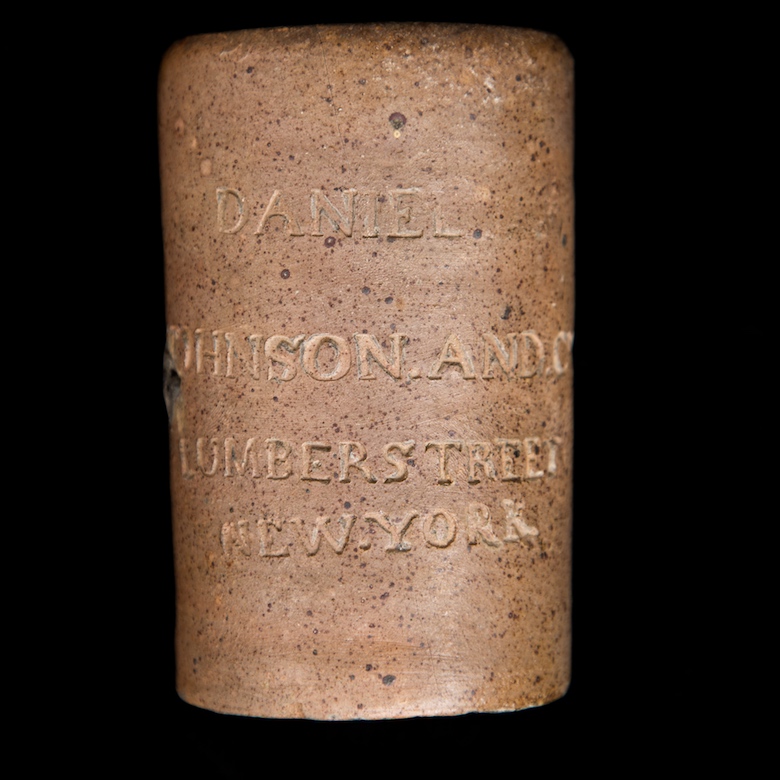 This circa 1800 oyster jar was found in present day Guyana, then a Dutch colony called Demerara. Ships leaving NYC in colonial times were loaded with jars and kegs of pickled oysters for delivery to the West Indies as part of the slave trade. Ironically, this particular jar was made by a famous free black potter Thomas Commeraw for a famous free black oysterman, Daniel Johnson, both residing in Manhattan at the time. This jar represents one of the first examples of advertisement on NYC pottery.